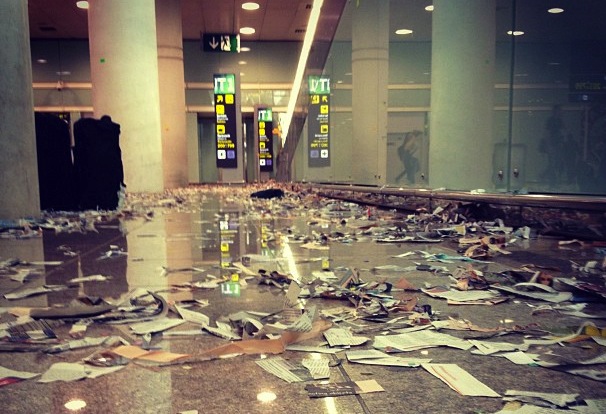 At around age 12, I quit reading sports journalism and stopped tracking the daily movements of the Phoenix Suns and Denver Broncos. It felt like a switch inside me had flipped, and I suddenly knew there was a larger world out there, one that didn’t leave me with the time or headspace to follow sports anymore.

Over the past few years, I’ve gradually come to a similar conclusion about political journalism, which replaced my sports addiction. With a very boring presidential election on the horizon and with the inevitable flood of process stories and lame gotchas about to flood our media, I can feel another switch flipping and my interest wandering.

So as of this week, I’m going to cut the cord completely. I’m quitting my daily observation of the struggle for American power and the many ways in which it conceals itself behind displays of false sympathy or outrage. I am ceasing to care when Republican presidential candidate Mike Huckabee says that Obama “resents the strength of Israel,” or the latest on Hillary brother Tony Rodham’s shady dealing overseas or what brand of pheasant feathers departing Congressman Aaron Schock put in a vase in his office. From now until approximately a week before the next election, I’m going to try to devote attention to any news but political news and trust that everything will be OK.


I caught myself reading a Ted Cruz profile in GQ, waking up in the middle of it like a reformed alcoholic surprised to see a double scotch in his hand.

This will not an easy habit to break. Just today, I caught myself reading a Ted Cruz profile in GQ, waking up in the middle of it like a reformed alcoholic surprised to see a double scotch in his hand. I love the craftsmanship that goes into smart political profiles. Lead with a dramatic anecdote, follow with a statement of what’s at stake, transition to the hopeful candidate’s origin story, throw in a few character assessments from allies and enemies, point out where the loyalties lie and where the money comes from, and then close with a last scene and a telling kicker. They’re not just windows into democracy, they’re windows into what drives human beings. In this sense, they’re a cheapjack version of literature.

I used to write such profiles myself—never for national media—but on the local level, first for the Savannah (Georgia) Morning News and then for The Arizona Republic. Yet I never walked away from one feeling as though I had completely nailed the essence of the person under scrutiny or predicted with accuracy how he might fare in a crisis. Nor have I walked away with that confidence as a reader. The tools of the trade—25 or so dispassionate paragraphs—remain the most imaginative probe that the newspaper business permits itself. They’re still the best common instrument of investigation we have today, short of mandatory polygraphs.

It’s not that I have a better idea for disseminating information on how government works and who is proposing to take charge. John Adams said that one of the best parts of democracy is the right of the people to know the character of their leaders. The implicit premise of a presidential campaign is that the position is so uniquely powerful that every one of its serious aspirants should be subject to the most proctological of examinations over the course of 18 months. We deserve to understand every fold and stitch of their personalities, to probe beneath all the carefully crafted layers of pleasing artifice required to win any elective office higher than junior high president. And it’s also entertaining.

There’s a reason why much of the ancient world’s literature revolved around the follies of kings and queens, why so much of the Hebrew Bible concerns itself with Judean leadership, why Shakespeare set so much of his drama in royal courts. We love to be spectators in the theater of power—holding the power of moral review over those who rule us.

We have endless opportunities today to indulge this habit in a crowded media world that includes four national newspapers, three traditional TV networks, four major cable channels, junkie rags like Politico and Roll Call, massively popular websites like Talking Points Memo and the Daily Caller, and the benthic zone of political re-blogging and side reportage done from mothers’ basements all over this great land. But according to the Pew Research Center, only about a quarter of political stories are about actual policy matters—the boring-but-important stuff—in a good year. The rest is chariot racing and freak shows.

I don’t mean to sound like a complete cynic. There is much quality work still being done amid all the dross. Matt Labash of the Weekly Standard may be the most incisive portrait artist of his generation. Charlie Savage of The New York Times is a master at exploring the little known levers and pulleys that make government work (and not work). The best explanation I’ve ever seen of the partisan divide across the U.S. appeared in a regional paper: Craig Gilbert’s detailed examination of neighborhood voting patterns in the Milwaukee Journal-Sentinel.

But these standouts are what the patient reader waits for amid the shorter process stories that get forgotten as soon as they’re read. There is much slop in the political kitchen the reader never sees. Any experienced candidate has henchmen who turn over dirty “opposition research” to favored reporters, often in perceived exchange for soft coverage. The diligent work of imaging consultants turns candidates into automatons, forcing reporters to salivate over unexpected human moments, which turn into phony “gaffes.” Seeing between the lines—and keeping mindful of truly important matters within all the noise—can be exhausting work for a reader. I’m pretty sure I can’t stomach 18 months of it, through November 2016.

Nobody is going to miss me. The world will not suffer if I fail to do what used to be endless self-assigned reading of those 8,000-word biographical entrees in The New Yorker, supplemented by the daily Pez candy tabs from Real Clear Politics or FiveThirtyEight. Nothing stupid that Republican candidate Dr. Ben Carson says in Iowa or a perceived “gaffe” by Hillary is going to change my center-left beliefs, which were shaped by decades of reading and firsthand observation that’s hard to forget. Climate change is real, guns need restrictions, health care should be a universal right, taxes should be progressive, public transportation is good, foreign wars of choice are bad … you get the idea. I can’t imagine changing my voting habits in the next 18 months. There comes a point when taking in the political cacophony is just seawater crashing against the boulders—it’s dramatic looking, but ultimately futile.

While I’ll never give up voting, I’m going to see what I can do with the time I used to devote to candidate biographies. I happen to live next to Los Angeles’ Skid Row and I’m finding myself far more interested in why the city thinks it’s acceptable for 5,000 people to be living outside every night, a question I doubt I’ll hear raised on FOX or CNN. I also haven’t seen a desert sunset in a while. How about that public golf course in Fullerton I’ve wanted to play? And it’s long past time to stop saying I’m going to read Julian of Norwich and actually start reading her. There’s a huge, fascinating world out there that is far more deserving of my attention.