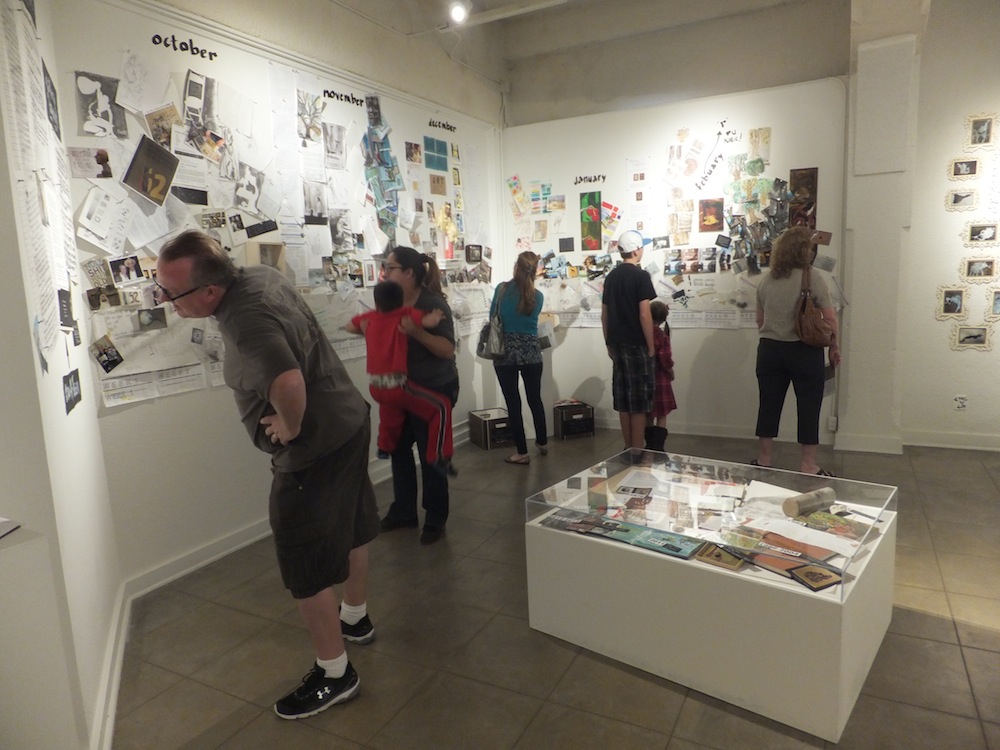 In 2008, when unemployment in Riverside, California hit 10.5 percent, owning a staffing business was cause for great concern. To keep my sanity, I started walking. I was fortunate to have Fairmont Park, a glorious place, just 1,000 steps from my front door. The park became my therapist.

One day I took one of my many blank journals to the park and wrote: “2009 is the year I start a committed artistic journey.” My interest in art had always been lurking and I had taken random classes for 30 years. With my commitment statement in hand and a determined pattern of trying to accomplish something positive during bad times, I signed up for my first printmaking class.

Like most cities, Riverside has free and affordable offerings, and I used them all … I took classes at the junior college, attended the monthly art walks for inspiration, and joined the community gallery where they’ll hang your good, but not great, art. After selling my first piece of art at the gallery, I was motivated to set up an art studio in my guest bedroom.

By 2011, unemployment was over 15 percent and the 33-year-old staffing business that I co-founded was on a respirator. We were able to pay our staff but there was no money for us, the owners. I decided that I would prefer to survive this time thinking of myself as a “starving artist” rather than an “unpaid business owner.” (A total mental game but it worked for me!)

I was still walking, and spending a few minutes daily on one of the lakeside benches writing in my journal. I kept my writings positive, capturing my creative thoughts, and trying to keep the feelings of despair at bay.

One day it hit me that my 60th birthday—September 28, 2012—was fast approaching. What did I want to do with this milestone? (“Fit by 50” had been my previous goal). I decided to take my 60th year off from work and take a yearlong self-directed arts sabbatical. I didn’t have anything to lose financially, since I wasn’t being paid either way.

Eventually I realized that in order for the self-directed year to be productive, I needed a little structure. I recruited an advisory team of four artists and curators, created a syllabus for the year, and committed to an exhibition at the end of my time off.

I wanted Fairmount Park to be my classroom. One day I counted the trees along my favorite place to walk and realized there were 52. Then there was the fact that I was born in ’52 so that year off then became 52 weeks. “Homeschooling at 60” had been my working title, but by the time I decided to submit an exhibition proposal to the Riverside Art Museum, the name had been shortened to “52.”

Through all my walking and writing, I had unknowingly planned this life-altering move. The entire proposal that I ultimately submitted to the Riverside Art Museum was in my journal, in a rough and convoluted form. It was bold, as a beginning artist, to ask an art museum for an exhibit but they had two adjoining galleries upstairs that were perfect for what I envisioned.

I had a good story and it was about more than the art. The museum must have agreed as they accepted my proposal, which included some traditional framed work, obsessive tracking of my year off, a residency, nature walks, seminars, and poetry readings. 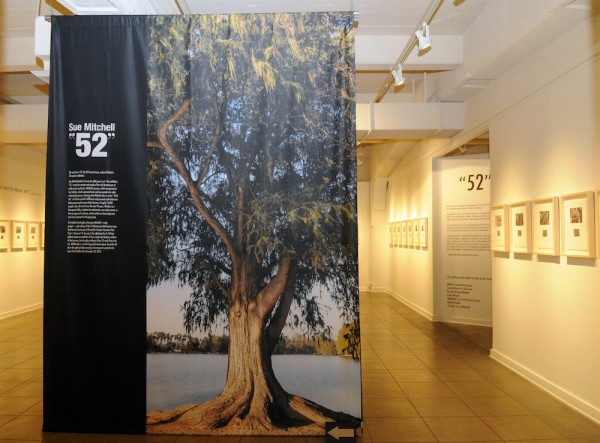 I announced the sabbatical plans at my 60th birthday party at the Riverside Community Arts Association gallery, where I was the spotlight artist. I also revealed that I would have an exhibition called “52” opening at the Riverside Art Museum exactly one year later.

The year off was extraordinary. I spent my mornings at the park walking, writing, sketching, taking photographs, reading, and studying. Afternoons were reserved for my guest room studio. I took a variety of art classes and visited many galleries and museums.

I had two glass jars. One was filled with 365 small rocks. The other one was empty. First thing every day, I moved a rock from one jar to the other. The visual of the rocks dwindling was powerful. As I turned the corner to the last half of the year, the pressure mounted.

As an experienced businessperson, I had no problem with writing the proposal promising an amazing exhibition. In my inexperience as an artist, I didn’t truly understand that I had overpromised. Now I had to do it—and it was a massive project. I had 190 feet of gallery wall space to fill with museum quality work. I was scared many times of failing…like when it took seven straight 12-hour days of printing before I came up with one show-worthy solar-etched print. It was a year of floating between feeling eager and anxious.

On my 61st birthday, “52” was installed at the Riverside Art Museum. It turned out very true to what I had visualized. I was overwhelmed with emotions when I saw it complete … I couldn’t believe I had pulled it off. At the opening, someone yelled out: “What are you doing next?” Since 52 was just a ridiculously large number, I said that whatever it was, it would be called “Five or Less.”

The first gallery showcased the solar-etched prints of my 52 favorite Montezuma Bald Cypress trees in Fairmount Park. The adjoining gallery displayed everything artful that I did during those 52 weeks. It was a crazy visual feast: a sketchbook, scrapbook, diary, daily planner, and journal all up on the wall, like the mad collage put up in the garage by the main character in the movie A Beautiful Mind. I also put together a gallery of art made from bird poop I’d collected in the park; it was my way of reminding people to notice the obvious and that anything can be art. 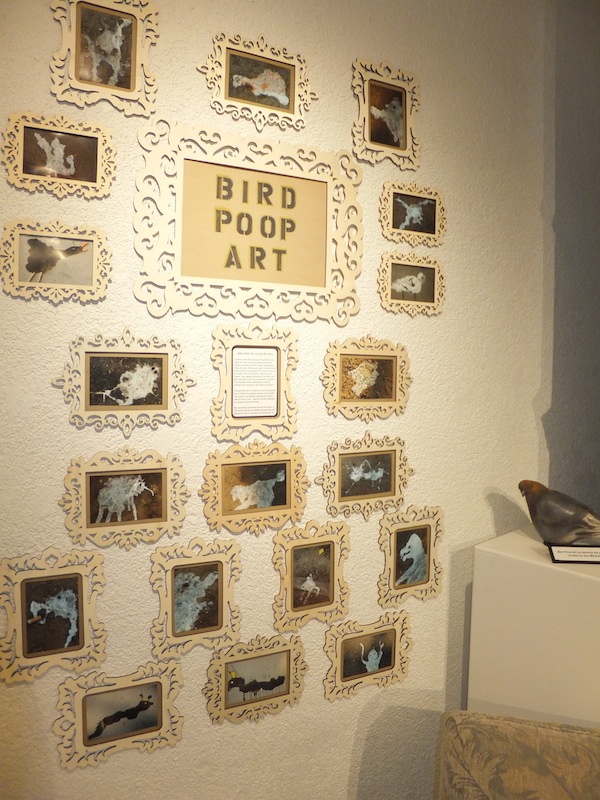 The back gallery at the museum also housed my studio, which I had relocated to the museum for the three months of the exhibition. Being in residence at “52,” I got firsthand feedback from visitors about the feelings my own work produced in people. There was a lot of talking, laughing, and even some happy tears. This strong reaction is what museums are supposed to be about—affecting people, making them feel something, inspiring them, and possibly changing their lives.

In order for more people to experience “52,” the museum asked The Community Foundation for a grant to offer free admission. By the time “52,” closed, almost 10,000 people had visited the exhibition. Talking to people—and reading the more than 200 pages of written comments—I understood that I wasn’t alone: most people have creative talents waiting to be unleashed. And millions of people are reassessing their priorities after the “great” recession.

I knew before the exhibition closed that I wanted to help as many people as possible to have a similar experience. I knew any program would have to be tailored to the realities of most people’s lives—working, raising a family, going to school, or maybe caring for aging parents.

Working with the Riverside Art Museum, I helped create “The 52 Project,” a self-directed 52-week art journaling exercise designed to help participants develop the routines of capturing their creative thoughts and being artful on a regular basis. The project, which has open enrollment, kicks off May 3.

So, start walking and see where you end up!