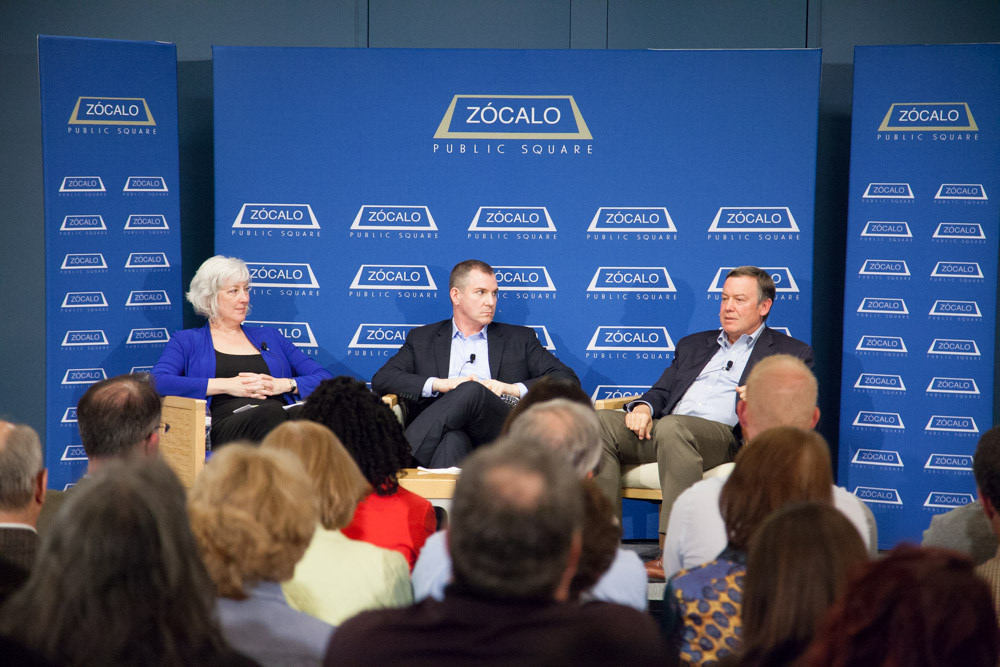 Liz McMillen can’t remember a time when Americans were more obsessed with the faults of universities than they are now.

“It seems that every other week, every other day, there’s an article coming out saying there’s something terribly wrong with higher education,” said McMillen, the editor of the Chronicle of Higher Education, noting skyrocketing price tags, the frenzy around admissions, and fraternities behaving badly, to name just a few issues.

In front of a standing-room-only crowd at the RAND Corporation in Santa Monica, McMillen asked the two panelists, ASU President Michael Crow and New York Times columnist Frank Bruni: “Do you think higher education is in crisis?”

This was the opening salvo in a wide-ranging discussion that covered what decisions students and parents make when they are considering colleges, what they should seek to get out of the college experience, and what universities need to do to stay relevant. The general conclusion: many people—parents, students, university administrators—have focused on the wrong priorities.

But the university isn’t about to implode, Crow said. “I don’t think it’s a crisis so much as a moment,” he clarified. “We’re at a moment where the previously very successful designs … are inadequate to the future assignment.”

By future assignment, he said he meant that many universities aren’t doing a good job at being inclusive of changing populations and giving their students the tools to become “master adapters” and “master learners” for the rest of their lives. And they’re not interested in becoming better in those ways.

“What we’ve lost in K-12 and colleges and universities is the desire to innovate,” Crow said. “We think we’re running some kind of old railroad.”

Bruni offered a more psychological analysis of this feeling of crisis.

“What strikes me is, I think America the country is very nervous about its future in a way that it wasn’t before,” Bruni said. “Higher education is proving to be a mirror of our national angst.”

Kids compete so ferociously in college admissions because no one’s sure about the economic future, Bruni said. Parents are not sure their kids will be better off then them, and those with means pay for college consultants as much as $60,000 to groom 8th graders for elite universities. Kids will choose a name brand college over a great one no one’s ever heard of.

And then once kids are accepted, parents and students assume that college will assuage those anxieties—that college will guarantee a boost up to a higher income bracket or lead to a prestigious job, Bruni said.

Grading a college on whether kids got a job afterward is too simplistic, Crow said. “There’s the reality of kids on the ground,” he said. When ASU asked what students cared most about, he said, “many of them are interested in jobs, but what they’re really mostly interested in is, how do they thrive? How might they be enabled to thrive?”

So, McMillen asked, how should students think about which college to choose?

“Way too many families are coveting the school that is the most exclusive,” Bruni said. There are so many places to get a good education that “families owe it to themselves to have a much more broad-ranging creative conversation about college options than they do.”

Even though he said the “soundtrack of his youth,” was his mother reading aloud the names of Ivy League schools off the stickers of cars driving around them, Bruni ended up going to a state school. He applied—and was accepted—at Yale. But he was offered a full-ride merit scholarship to the University of North Carolina.

He couldn’t turn it down and was happy to be surrounded by people from all backgrounds, unlike siblings who had gone to schools with more affluent school populations. “I felt blessed to have gotten a better education than if I’d gone to Yale,” he said.

Crow confessed that when he was considering college, he may not have had the most critical thinking process. He was accepted to the Air Force Academy, but his girlfriend at the time couldn’t go, so he didn’t want to go either. He was a javelin thrower and Iowa State University needed one, so that’s how he ended up there. Once he arrived, he was bowled over by the different classes he could study and the plethora of books in the library. “I was probably the only javelin thrower living in their library,” he joked.

Crow employs a more systematic approach with his youngest daughter, who is a high school sophomore. He asks her to think about what makes her smile. Since she likes oceanography and possibly wants to be a “lawyer for the Earth,” they’ve looked at colleges with great marine science programs.

“Find faculty members that want to do a good job,” he added. “Hook up with them and you’ll be fine.”

College rankings are of little use in this decision-making, both panelists agreed. “There’s no ranking of any kind—including college rankings—that can’t be gamed,” Bruni said.

Crow said that when he was the chief research officer at Columbia University, he learned that his school was ranked third in the world in ceramic engineering. Columbia didn’t even offer that specialty. “Even in things we didn’t have, Columbia, because of its aura, was unbelievably ranked. I thought, there must be something wrong if we’re ranked in things we didn’t have,” Crow said.

An audience member asked what the panelists thought about how high school guidance counselors were doing.

“Could be better,” Bruni said. But he conceded, “They’re under extraordinary pressure to produce.” If they were freed from being measured by how many kids they got into Ivy League schools, they could be more effective, he said.

Crow said he started by reading the large body of existing work about how to reinvent universities—citing the former president of Cornell, Frank Rhodes, and the turn of the 20th-century education reformer John Dewey, among others.

And then he asked his faculty not to be “simple replicant bureaucrats,” but to adapt their teaching to reach this key goal: “We will be measured by who we include and how they succeed, not who we exclude.”

“The faculty and the staff and others, they got behind it,” Crow said. “And then you just take your hands off the handle bars and it’s amazing how the bike still goes.” 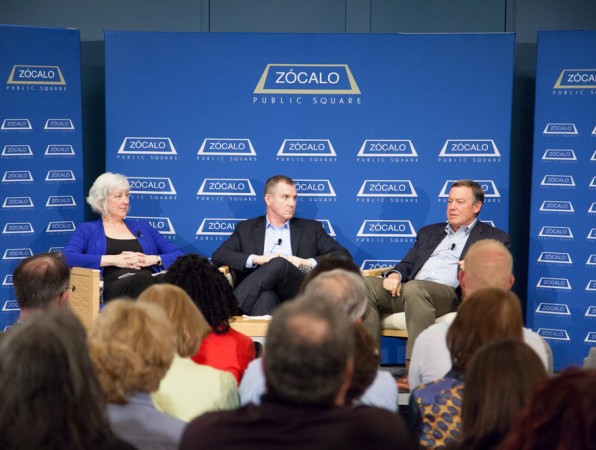 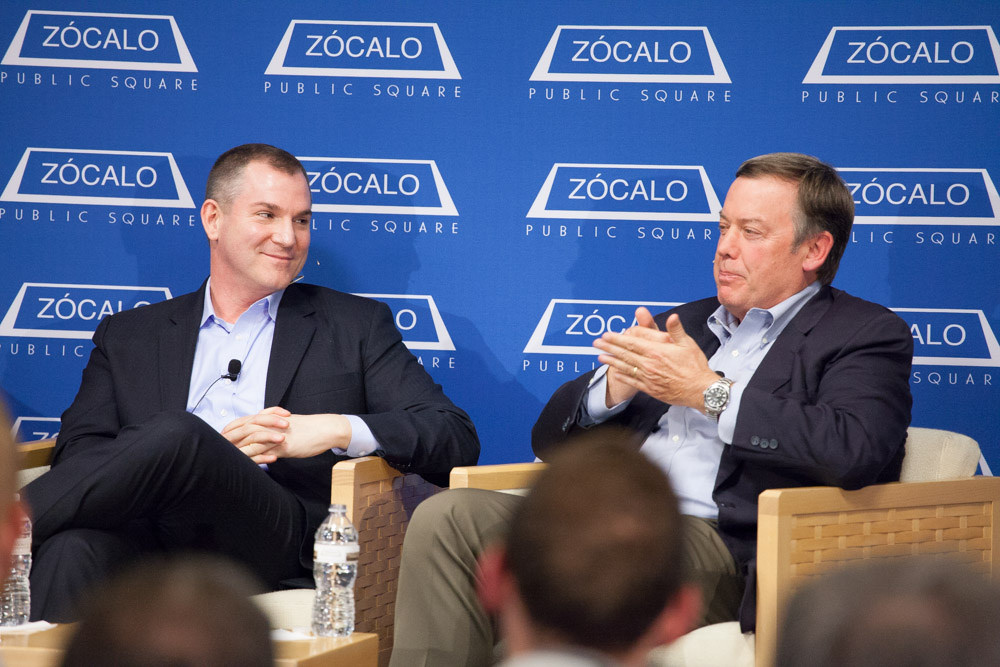 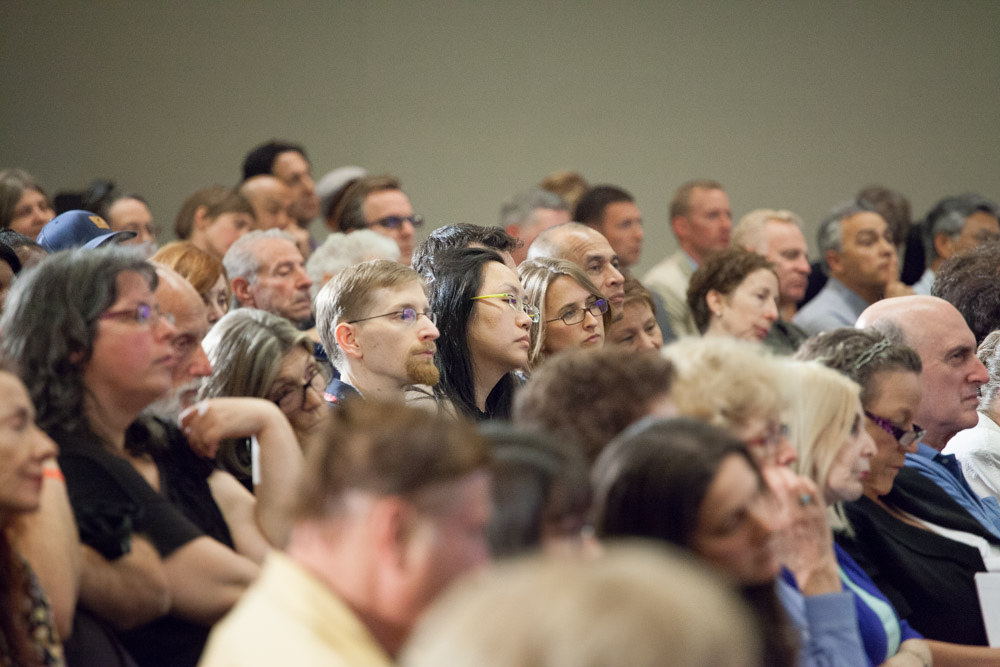 The standing-room-only crowd at RAND Corporation 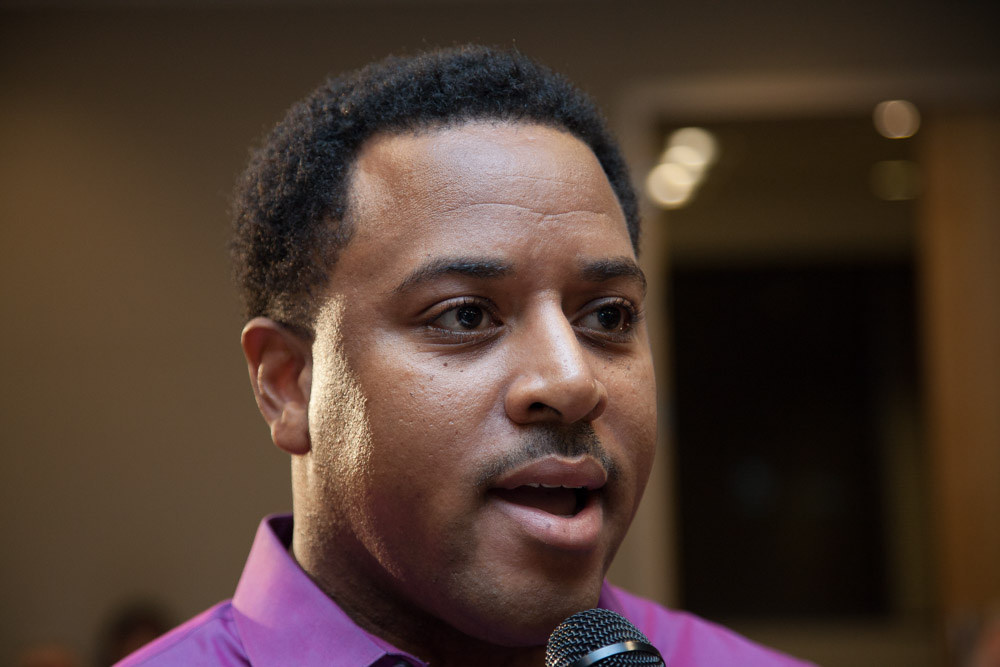 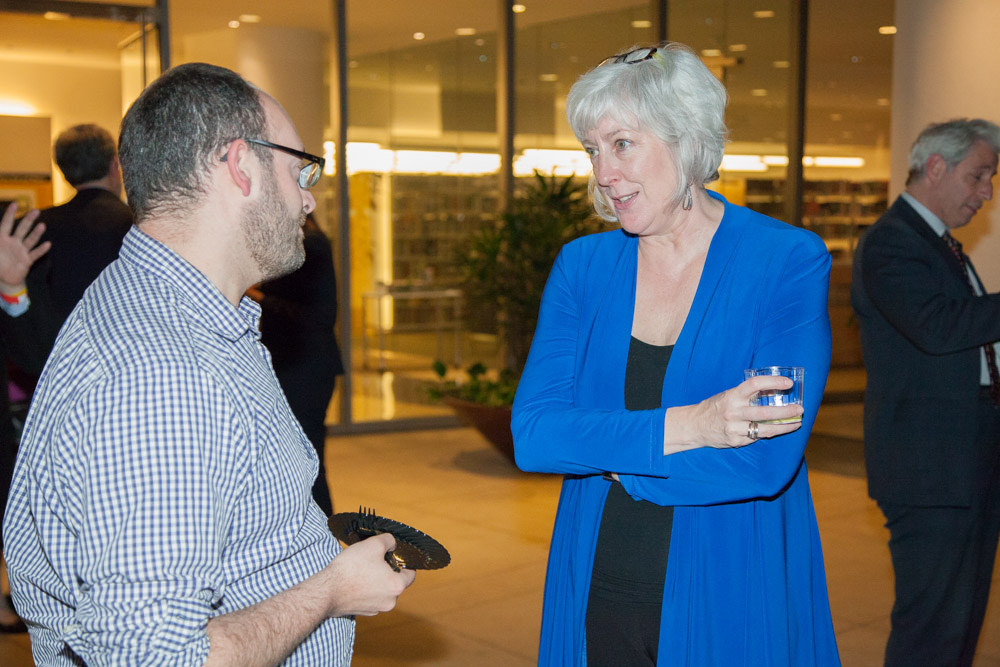 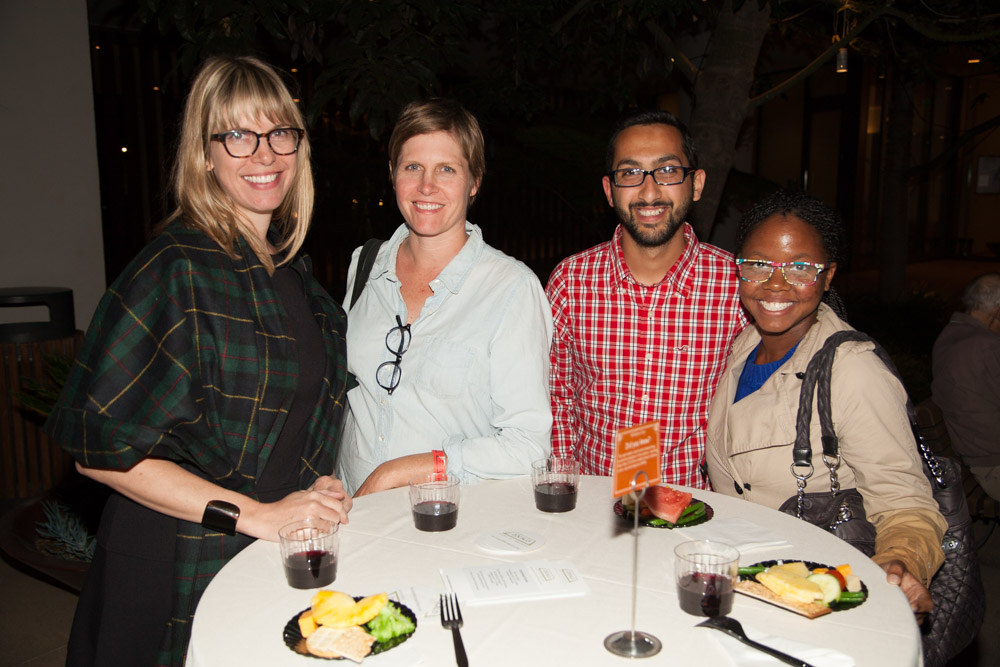