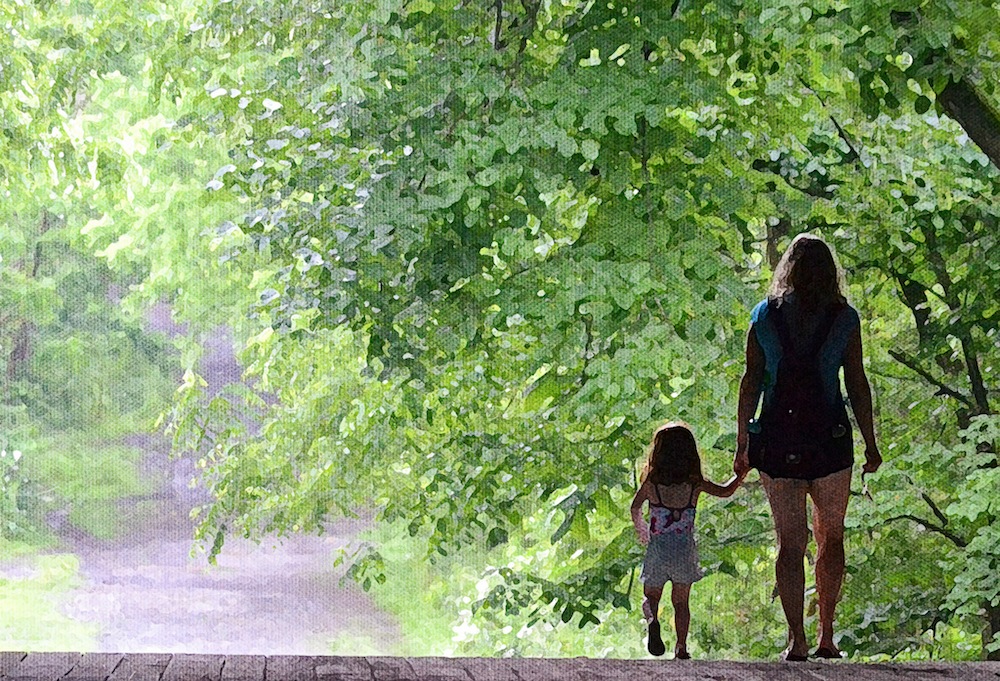 Talking openly with children about sensitive subjects is hard. It always has been. In my parents’ generation, the three-letter taboo was S-E-X. My older sister was 13 when my dad gave her “The Talk” for the first time. It was the ’80s, and my dad dodged it like any educated man of his time. He tossed her a sex-education book and said, “Read this, but don’t do it.”

Discussing sex isn’t quite so scary today. Many modern fathers don’t flinch when their daughters ask about anatomy or start inquiring about how babies are made. But progressive thinking has a way of replacing certain taboos with others. And today, for a great many parents, there is a new three-letter word: G-O-D.

With two of Western religion’s most important holidays—Easter and Passover—in the air, I find myself thinking back to the first time I had the “God Talk” with my own daughter. Maxine was barely five years old when she piped up from the backseat on the way home from her Los Alamitos preschool one day.


Maxine is 9 and believes in God “two days a week—on Sundays and Wednesday.” Is that logical or rational? No. But who cares?

I felt like a cartoon character being hit in the back of the head with a frying pan. My heart raced. I’m quite sure I began to sputter. Visions of Darwin and the evolving ape-man raced through my mind, followed closely by my childhood image of the big guy upstairs in his flowing white robes. I couldn’t speak.

And, in the awkward silence that followed, I was forced to confront the truth: The idea of talking to my kid about God—and, more specifically, about religion—scared the bejesus out of me.

I swallowed hard and forced myself to speak. “Well,” I said, “Who is God?”

Now, I don’t remember if Maxine actually said “duh,” or whether she simply bounced a “duh” look off the rearview mirror. But I can tell you that the “duh” message came across loud and clear.

“He’s the one who made us,” she said, her eyebrows knitted. “Okay … well, what is God doing now?” I tried for casual.

Again with the nonverbal “duh.”

“God is busy making people and babies,” she answered.

This information could not have been delivered with more certainty. My little girl, who had never heard an utterance of the word “God” in our house, aside from decidedly ungodly uses of the word, now had it all figured out thanks to a Jewish classmate who also happened to be her very first boyfriend. I was beaten to the punch by a cute preschool boy.

I let the subject drop, but my chest constricted all the way home. It stayed that way for hours. Why hadn’t I been prepared for this? What was I supposed to say now that she was getting her information from this boy at school?

As a science-minded non-believer with a generally non-confrontational personality, I was stumped by how to handle the situation. I wanted to be truthful about what I believed to be truth, but I didn’t want to indoctrinate her into my worldview either. And I certainly didn’t want others indoctrinating her into theirs, either. So where did that leave me? Was I to sit Maxine down and tell her that evolution, not God, was responsible for her existence? Was I to impose my own beliefs on her, the way other parents seemed to be doing? Or should I leave her alone to explore on her own timetable? What was the difference between guidance and pressure anyway? What was I willing to “let” her believe, and what wasn’t I?

Luckily for me, I have a husband who is cool under pressure. Later that day, after I’d rather breathlessly presented him with all the facts of the disastrous car ride, I asked him, “What if she believes in God?” His answer, my wakeup call, has become a mantra I repeat often. He said, “It’s not what Maxine believes, but what she does in life that matters.”

What I took from this was: Relax … it’s just God.

So I set aside my own irrational concerns and began to talk with my kid about God—lots of gods, actually. We talked about Brahman and Buddha, Jesus and Muhammad. My husband bought her a Children’s Bible, and I brought home lots of picture books highlighting aspects of various religious cultures.

To my delight, Maxine became genuinely interested in religion—as long as it came in bite-size pieces, rather than overly long oratories. She became engaged in the stories we told, and good at deciphering the various “moral” aspects of various tales for herself. In her hands, the Bible wasn’t a tool of indoctrination, but a tool of religious literacy—even critical thinking. Once when she was reading the 10 Commandments, for example, she got to the 10th and read (aloud): “Never want what belongs to others.” Then she stopped and corrected Moses. “Well, you can WANT what belongs to others,” she said. “You just can’t HAVE it. You can buy one for yourself.”

In the four years that have passed since Maxine first told me about God, we have discussed the subject countless times. I have learned that compassion and an open mind are more important than being right. I’ve also learned that the best way to combat intolerance is with knowledge, and that the best way to combat indoctrination is with critical thinking. No longer is there awkwardness around the subject. We talk about lots of different beliefs, encourage her to learn about what motivates the faith of others, and make clear that there is no shame in choosing an unpopular path. After all, her own parents are happy, well-adjusted, and (I like to think) good-hearted people.

Today, Maxine is 9 and believes in God “two days a week—on Sundays and Wednesday.” Is that logical or rational? No. But who cares? It works for her, and that’s what’s important.

I haven’t always done everything right. I have stumbled sloppily through more than a few conversations along my own journey and regretted my word choices now and again. (Our unique biases have a way of filtering through from time to time, despite our best efforts.) But, because the conversations keep coming, I’ve almost always had a chance to right my wrongs, to clarify my position, to bring a new perspective to each situation. The point here is not to be perfect—as my daughter says, “That would be boring”—but to give us something to aim for.

Exposing kids to various brands of spirituality and religion (not to mention non-religious philosophies) is not only fascinating and surprisingly fun; it also has the potential to improve our children’s— and our own—awareness about and compassion for the multiplicity of kinds of people in the world. Like the “sex talk,” discussions about God may come up sooner (and differently) than you had pictured. But it’s our obligation to embrace it. After all, if we’re not prepared to explore ideas of God, religion, and faith with our curious children, someone else will do it for us.