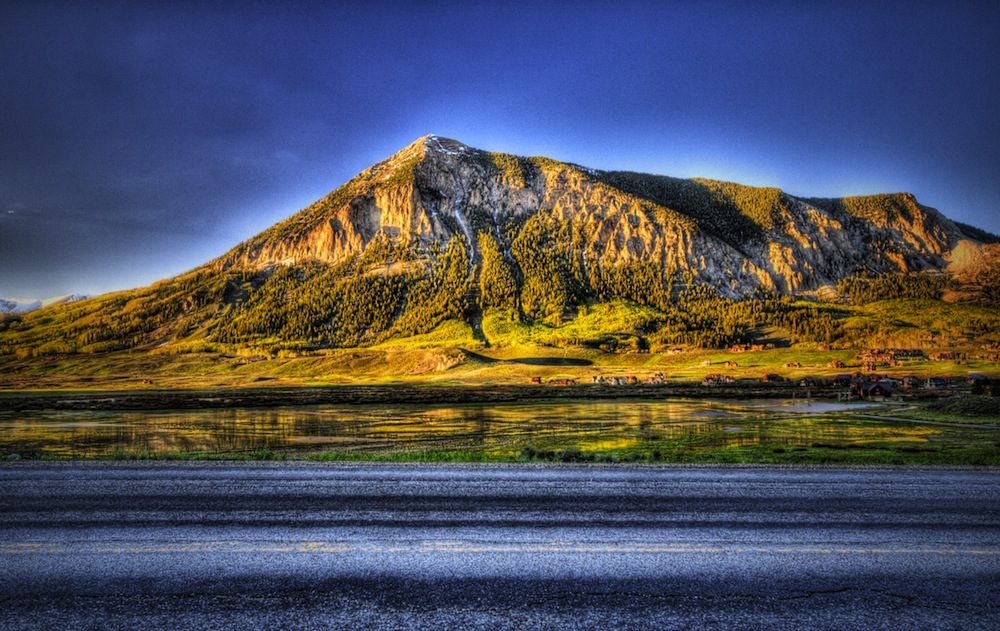 I roamed the country in my youth, but Crested Butte, the charming mountain town that owned my heart, kept me from straying too far.

Despite living in six different states over a period of two decades, I never found a place that felt like a real home: safe, secure, lived-in, and happy. I wanted to make marks on a wall for every inch I grew in a year and refer to my friends as lifelong pals. Instead, all I got were new empty houses and untimely goodbyes. How can you really make a home for yourself when you spend less than five years in a new state? When you know you’re just going to leave again? When you can barely keep all of your addresses and zip codes straight?


I floated in the bone-chilling, fast-running water for about 15 minutes, barely able to breathe or see where my raft was.

When each of the six houses I lived in felt cold and foreign, Crested Butte came closest to what I’d always imagined a real home would feel like. My family and I owned a condo there, and we spent two weeks every summer there for 13 years. I never stayed anywhere long enough to know heartwarming details, but there are things I know about Crested Butte that few others could tell you. Like where to find the best wildflowers or the tastiest tamales, and where the best spot is for the annual Fourth of July parade. How you can count on it raining at 2 every afternoon or how getting the best night’s sleep requires opening your bedroom window to hear the mountain sounds and breathe in the fresh air. To most people, Crested Butte is just another ski-town in Colorado. To me, it’s home, a place to come back to and reconnect with each year no matter where else I go.

I was born in California, but my family quickly moved east to Ohio after my birth, as my restless and opportunistic father moved from one corporate job to another. From Ohio it was on to Texas and Georgia, then back west to Colorado. When it came time to decide where to attend college, I chose to go out-of-state, to Arizona, where I live now.

I got so used to change as a child that it now runs through my blood. Like a true nomad, if I’m in one place for too long, I get antsy. But returning to Crested Butte each summer never grew old. Every time I saw Mt. Crested Butte in the distance from my car window, a pit of excitement would form in my stomach. My sister and I always said the mountain peak looked just like the one the Grinch lived on, hovering over the Whos down in Whoville. Once the peak crept into our view, we knew there were only 30 minutes left until we would drive into the historic old town with wooden buildings and faded, chipping paint. Our arrival ritual was always the same: scope out the local boutique Retail Therapy for any potential items to add to our closets, check to see what movies were playing at the two-room Majestic Theatre, then head to The Last Steep Bar & Grill for a casual dinner.

It always comforted me to see my favorite cafés or shops there still open, and to know that I could still order buttered noodles at The Last Steep. In each of the new houses I lived in, I would wake up some nights and not remember where I was. I would have to change the way I dressed or acted to fit with each new place. When I was in Crested Butte, I could just be me. I wasn’t an intruder there. I was welcomed, and I considered myself a local.

It wasn’t just the tangible things that gave Crested Butte such a special place in my heart. It was the way Crested Butte kept me grounded when all of the memories started to blur together and the houses began to look the same everywhere else.

Crested Butte is where I almost died. During one of our many rafting trips down Taylor River, 11 out of the 14 people present fell out of their individual rafts when we reached the section of the river referred to as “The Toilet Bowl.” I floated in the bone-chilling, fast-running water for about 15 minutes, barely able to breathe or see where my raft was. Eventually, my best friend came to the rescue and pulled me, and my mom, into her boat. We didn’t go rafting for two years after that. Crested Butte is also where I came face-to-face with my fears—because I eventually went back to that same river route and conquered “The Toilet Bowl” two years later.

Crested Butte is where I almost lost my family. After a day of playing outside on the mountain, my sister and I were met by our crying mom carrying her packed suitcase and our stern-looking dad sitting on the couch. In between sobs, my mom told us how unhappy she was, that we spent too much time outside and that she was feeling lonely. I can’t remember exactly what else she said, but I distinctly remember hearing the word “divorce.” My mom and dad did most of the talking, while I held on tight to my sister. My mom eventually agreed to stay and we agreed to spend more time with her and to communicate better as a family. From that point on, I nervously looked at every fight between my parents as a potential family breakup. But over time our bonds became stronger, thanks in no small part to Crested Butte.

I used to resent my parents for the constant moves, but now I’m happy to be a nomad. I learned to let go of the little things and to be social in the most awkward situations. If something makes me feel trapped or unhappy, I can just pick up and leave without a second thought. But even nomads need a place to keep them from straying too far.

Like any place, Crested Butte has changed over the years. The town I grew up in started to out-grow me, or maybe I started outgrowing it. The sushi place we used to eat at for our birthdays closed down. Our family friends chose to spend Fourth of July with their older college friends instead. And this past summer, we finally sold our condo. A place that felt like home turned into just another closed chapter in my life’s book, another friend I would stop keeping in touch with.

As I’m writing this now, I catch myself twirling a skinny silver ring on my middle finger. It has the coordinates of the mountain engraved on the outside and the words “Crested Butte” etched on the inside of the ring. I bought it during my last, and possibly final, visit to my charming mountain town—so that no matter where I go, a little piece of home is always with me.