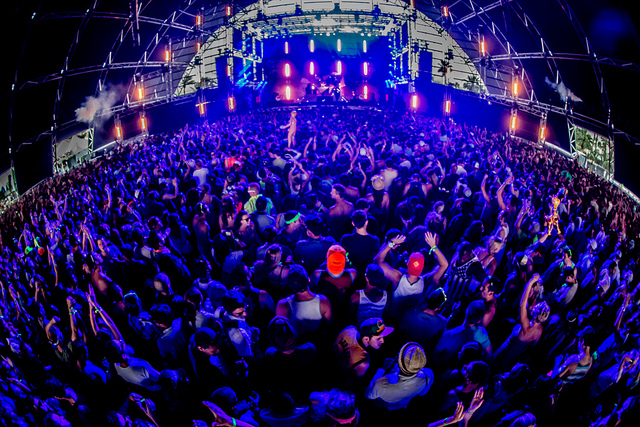 We’re looking for a more relatable approach to art

This weekend, tens of thousands—maybe even nearly 100,000—music fans are rocking out at the Coachella Music and Arts Festival in Indio, California. With multiple stages going full-blast, festivalgoers will face difficult decisions such as: Should I catch the soulful roots-rockers Alabama Shakes or the haunting Swedish singer-songwriter Lykke Li? Should I skip the electro-pop duo Odesza to get a good spot to see the superstar hip-hopper Drake?

And music isn’t the only delight on offer: When fans get tired from dancing or being packed cheek-to-jowl in the crowd, they can eat up hot pots by Kogi food truck master Roy Choi, green gazpacho from Top Chef’s Marcel Vigneron, or boozy popsicles from the L.A. restaurant The Church Key. There also will be large, brightly colored sculptures to check out.

If Coachella isn’t your bag, there is a festival somewhere in the country for every interest—classical music at the Spoleto USA Festival in Charleston, South Carolina; paintings that come to life at the Pageant of the Masters in Laguna Beach, California; all the Bard you can consume at the Oregon Shakespeare Festival, just to name a few. In advance of the Zócalo/James Irvine Foundation event “Do Arts and Music Festivals Matter?”, we asked a panel of experts: What does the popularity of music and arts festivals say about the ways Americans are experiencing art now?

As a scholar whose work has one foot in the historical past and the other in the contemporary world of Chicana/o art and culture, I am struck by how current music and arts festivals embody a universal need for humans to join together, and a universal desire for transcendent experiences, such as those fostered by listening to music or experiencing the arts.

In the past that I study, the Hispanic world, 1492 to 1800, people transcended their ordinary concerns often through their spiritual practices. They were joined together and carried away by the communal practice of the Catholic liturgy, with its attendant rituals, sights, sounds, and smells. They prayed together, chanted together, or joined in worship together before cult images of beloved holy figures. Similar collective experiences were had at large fairs, at markets known as tianguis, or in the main square called the plaza mayor or zócalo, where people witnessed fireworks, royal entries, priestly processions, penitential parades, or the Inquisition’s public punishment of supposed heretics.

In our current digital age, the revival of music and arts festivals, which have more immediate roots in Woodstock and Grateful Dead concerts, testifies to our desire to connect beyond the digital world, to unite in person with other real humans, as well as our need to do something beside pushing a webpage’s “like” button. We long to participate in and create community—to imagine we belong to a community of like-minded souls, as the scholar Benedict Anderson described one of the key processes involved in nation-building.

It is in this imagining, this coming together, that we truly experience our humanity, in dialogue with others, in their physical presence. We are at our most human when we are with other people.

We’re looking for a more relatable approach to art

The popularity of the La Quinta Arts Festival—which has had the honor of being ranked by the Art Fair Sourcebook as the number one fine art festival in the nation three years running—speaks to the power of communal feasts for the senses.

Do you recall your first art experience? My guess: In or around fourth grade, you and your classmates were ferried off to a local museum. In my case, this was an imposing marbled edifice containing gilded master works where order (no touching!) and decorum (no talking!) ruled the day. Intimidating!

The natural and informal ambiance of outdoor arts festivals sets the tone for a casual and comfortable shared cultural experience. If you can present people with the opportunity to interact and engage directly with an artwork’s creator, the esoteric becomes tangible and compelling. Often heard at our festival: “How did you find the inspiration to create that?” “How long did that take to make?” “Did you study art in school?” These interactions humanize art, make it approachable and relatable. At our festival, we want to make it easy to view, learn about, and ultimately decide to purchase a piece of art.

Then, to be able to share your newfound knowledge and original art treasure with your friends and family while listening to music, watching a dance performance, and enjoying some food and drink—all the more rewarding!

What could be better than being at a festival of like-minded souls, most of them younger than yourself, but still, rocking the music, art, or literature that you like, too?

Well, perhaps the anticipation of such a ’palooza, or the nostalgic haze after it. Woodstock—for all its significance as a beacon for flower children in 1969—required much slogging through rain and mud, as photographs attest. When I went to the Coachella Music and Arts Festival last year with my daughter, there was waiting, hiking, and heat—not to mention the questionable artistic value of performance pieces with giant puppets. And the really loud techno—I thought this is what sonar must sound like to whales.

While there’s nothing quite like singing at the top of your lungs with thousands of other people to make you feel like part of a movement, I believe communal pleasures can be found in smaller gatherings as well. At our LitFest Pasadena, we are in our fourth year of talking books with great writers. This year’s will be held on Saturday, May 9 in Pasadena’s Playhouse District. The hallowed Vroman’s Bookstore will help host; panels will take place in the Pasadena Playhouse itself as well as in bars and other shops. There’s a book reading every night in every major city, but the power of a literary festival lies in bringing together many sensory pleasures: 350 people last year showed up to listen to food writer Ruth Reichl talk about her first novel Delicious, while drinking really good wine from Everson Royce and tasting fantastic guanciale by Robert Simon, whose career was launched by one of Reichl’s reviews. And when that was over, they could simply walk down the street to another session.

It was an easy-to-like afternoon—and it said everything about why Americans go to arts festivals.

Larry Wilson is public editor and columnist for the Pasadena Star-News and a member of the Los Angeles News Group editorial board. On the side, he is the co-founder and artistic director of LitFest Pasadena, and the author of a chapbook, Twenty Surf Poems and a Song of Despair.