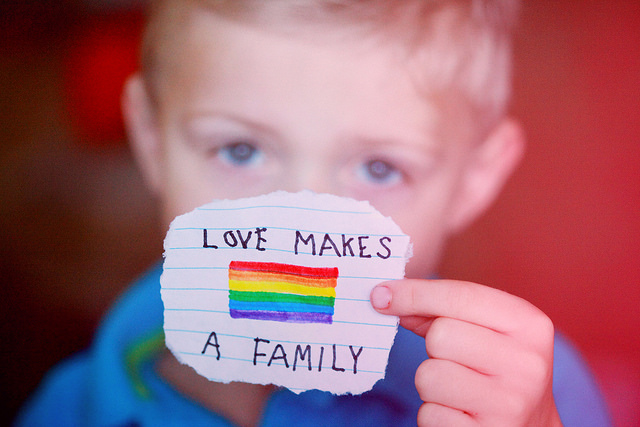 On April 28th, the U.S. Supreme Court will hear oral arguments in an omnibus case about whether same-sex couples are allowed to marry in all 50 states in this country. The probability of the court ruling in favor of legalization likely played a role in the Indiana and Arkansas controversies over the passage of their Religious Freedom Restoration Acts at the beginning of April.

Proponents and opponents of marriage for same-sex couples agree that heated debates about religious liberty are one effect of the marriage debate. But they strongly disagree about what America and its families will look like if same-sex couples can marry throughout the nation. Opponents have made dire predictions of marital instability, falling birthrates, and increases in children being born outside of marriage—in short, the destruction of American families.

But an examination of the data—particularly as it relates to the children in this country most in need of loving and stable families—does not support those predictions.


Opponents have made dire predictions of marital instability, falling birthrates, and increases in children being born outside of marriage—in short, the destruction of American families.

In a recent friend-of the court brief that I submitted to the Supreme Court, I explore what demographic and social science research tells us about the impact of the upcoming ruling. Today, nearly 1.4 million men and women are part of the estimated 700,000 same-sex couples living in this country. About 350,000 of them are married couples and 122,000 are raising more than 200,000 children under the age of 18.

Michigan couple April DeBoer and Jayne Rouse, plaintiffs in one of the cases currently before the Supreme Court, offer an example of how same-sex couples already play an outsized role in caring for some of the nation’s most vulnerable kids. They have adopted four children, two with developmental disabilities who require special care. U.S. Census Bureau data show that April and Jayne are not alone.

Opponents of marriage for same-sex couples argue that children do best when they are raised by their married biological parents. They reason that reserving marriage only for different-sex couples promotes that ideal. Assuming that kids do best with married moms and dads is a false read of social science research. A more careful review of the literature shows that children tend to do better when they are raised by two parents who are in a stable and committed relationship. Marriage offers a way for many couples to strengthen and support their desire for stability, love, and commitment. Kids with married parents, regardless of the sexual orientation or gender of those parents, benefit from the security that marriage offers to many couples.

What about the argument that reserving marriage for different-sex couples encourages them to raise children within marriage? This argument implies that allowing same-sex couples to marry might decrease the likelihood that different-sex couples decide to marry and have kids. Even if every same-sex couple in the country got married tomorrow, they’d only represent about 1 percent of all married couples. The notion that their marriages could alter the behavior of the other 99 percent of married couples (and unmarried heterosexuals for that matter), especially regarding such important and personal decisions like whether or not to marry or have children, seems ludicrous on the face of it. It turns out that the research agrees.

The recent events in Indiana and Arkansas prove that a Supreme Court decision bringing marriage for same-sex couples to all parts of the nation won’t end political conflict associated with LGBT rights. But it will improve America’s families. The nation will have more married couples, more kids with married parents, and more stable homes and families for the country’s most vulnerable children. It’s hard to understand how that could ever be a bad thing.