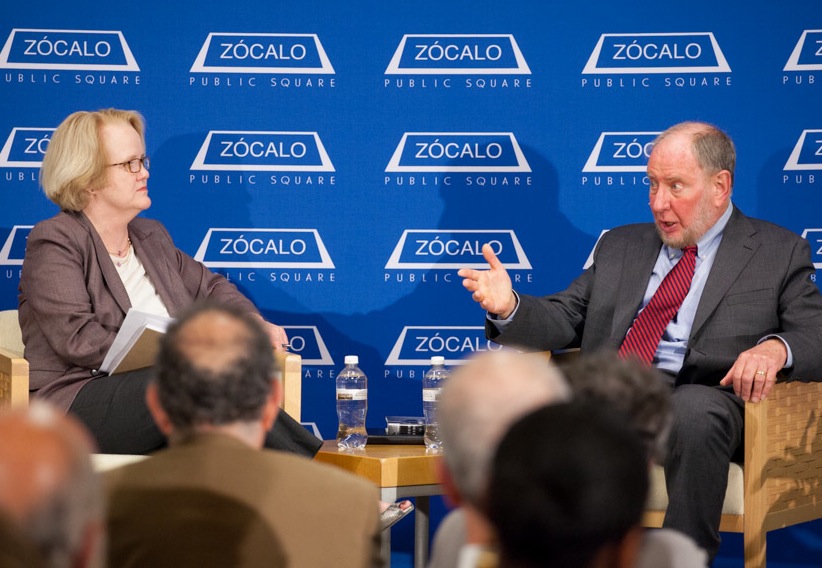 Harvard political scientist Robert D. Putnam grew up in the 1950s in Port Clinton, Ohio, a small town on Lake Erie. Central to his new book, Our Kids: The American Dream in Crisis, is his return to Port Clinton to meet with childhood friends, see how the community had changed, and reflect on how it shaped him. In front of a full-house crowd at the RAND Corporation, David and Lucile Packard Foundation President and CEO Carol S. Larson, the evening’s moderator, opened the discussion by asking Putnam to reflect on Port Clinton, and to talk in personal terms about his motivation for writing Our Kids.

“I wanted to change the discussion in America,” said Putnam. “I want us to focus more directly—all of us—on poor kids.”

Putnam said that while his childhood in Port Clinton wasn’t perfect—there was racism and sexism—he “remembered the place as largely classless.” Rich kids and poor kids attended the same churches and played on the same sports teams. And ultimately, in interviewing his classmates over half a century later, Putnam discovered that “we had lived the American dream.” Eighty percent of his class did better economically and educationally than their parents had. His two black classmates, who faced serious prejudice in Port Clinton, also “experienced unbelievable upward mobility.” They earned graduate degrees and had successful careers despite the fact that their parents had only third-grade educations.

Putnam has spent much of his career focusing on “how powerful community can be.” Going back to his hometown, he realized that at the root of this interest was how deeply he felt community there.

Today, the kids of Port Clinton aren’t rich in that same kind of community. The town has been hit hard by deindustrialization; the people who might have worked in factories are instead leading lives that are “so desolate and so alone and so without prospects” that Putnam found it hard to believe that this was the same town he grew up in.

But this is not the story for all Americans. “Things are getting better and better for the kids in the upper third of American society,” said Putnam—the children of college-educated Americans. But when it comes to children from the lower third of American society, whose parents haven’t gotten past high school, “their lives are getting worse and worse.” The gap is growing between these two groups in everything from participation in extracurricular activities and summer camp attendance to test scores, school quality, and mentoring.

The whole country is going to suffer for this, said Putnam. And it’s not just about economics. It’s about American principles, too. “It just isn’t fair,” Putnam said. “It violates the core commitments of our country going back to the beginning.”

And although America is divided both politically and by growing inequality, the one thing we’re not divided over, said Putnam, is that 95 percent of us think that everybody should get a fair start in life.

Larson asked Putnam why he seems to have “intentionally set out not to have villains” in his discussion of inequality in America today. Why not bring into this discussion the powerful political influences that are keeping us from closing the opportunity gap that poor kids face?

What, asked Larson, is your message to politicians?

Putnam said that he’s spoken with many of the presidential candidates on both sides of the aisle; Jeb Bush and Hillary Clinton have both mentioned his book. (Bush liked the first five chapters, about the problem; he didn’t like the sixth, about possible solutions.)

“I want to get everybody arguing about how we fix this problem,” said Putnam. “That’s my main purpose.” America addresses tough issues through argument. He added that the opportunity gap is a “purple problem.” Some aspects—the economic decline of the American working class—are better understood through a blue, liberal lens. Others—the collapse of the working-class family—are better seen through a red, conservative lens.

What, asked Larson, can we do as individuals to address this problem?

Putnam said that individuals should “support candidates, nationally and locally, who are able to answer the question, ‘What are you going to do about the opportunity gap?’” But they can also help the kids in their communities. “Poor kids are alone,” he said. Every institution—families, churches, schools—has failed them. They don’t trust anyone. They need adults in their lives—and we can be those adults by serving as mentors.

He said that a seemingly trivial issue—the growing gap in participation in extracurricular activities like band and sports—is a very big problem. These activities teach kids “soft skills” like cooperation, grit, determination, and delayed gratification. The reason for this gap is that these activities are increasingly “pay to play,” with fees that go up to thousands of dollars. Yes, there are waivers in many schools, but these waivers come with a social cost; no kid wants the stigma of having a waiver. Putnam advised audience members to call their school board and urge them to end waivers, and fund these activities.

At the event’s conclusion, Larson quoted President Lyndon B. Johnson talking about his war on poverty, and asserting that before he was through, no people or community in America would “‘be able to ignore poverty in our midst.’” You’re trying to do the same for the opportunity gap, Larson told Putnam. 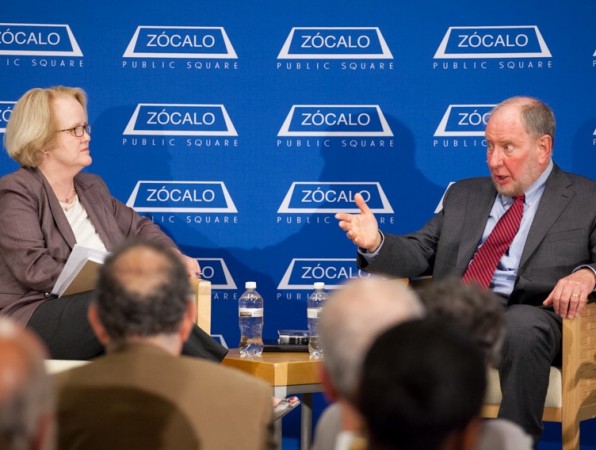 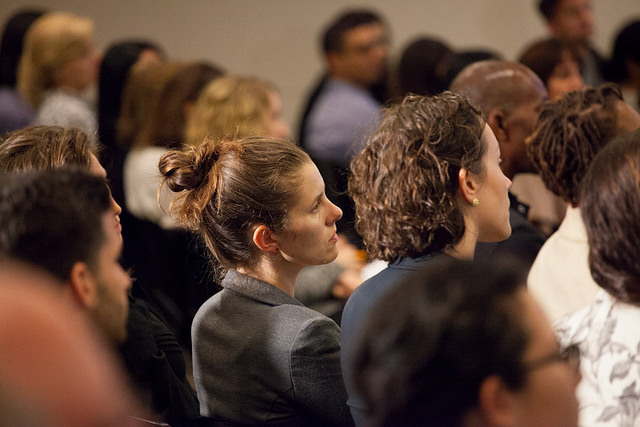 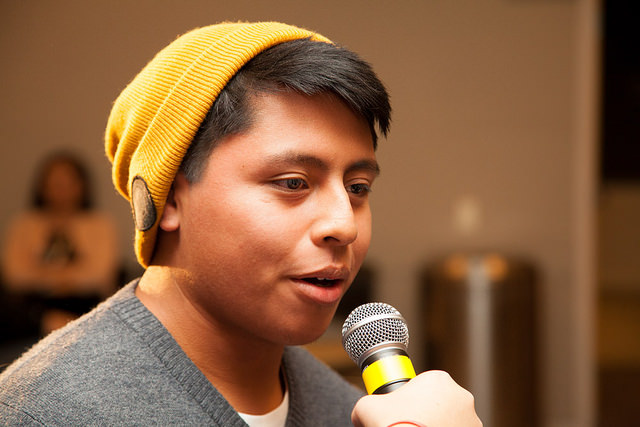 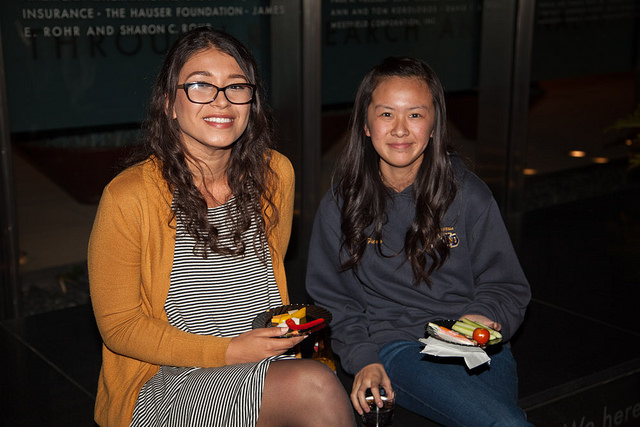 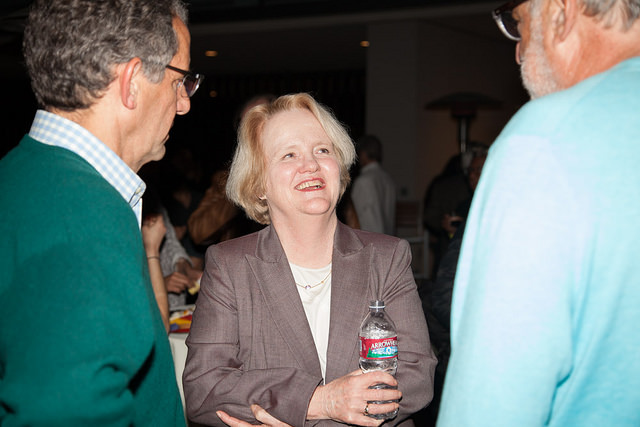 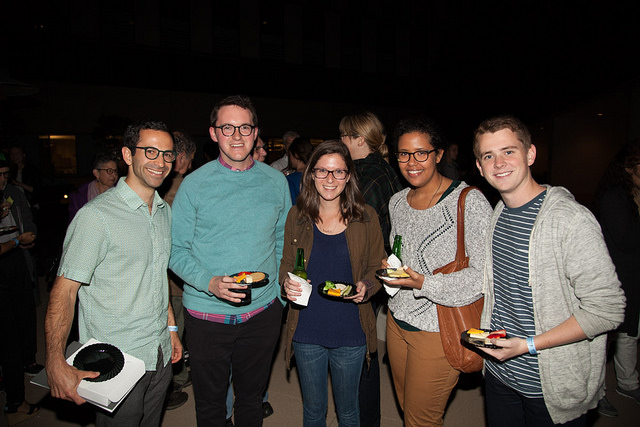 Guests in the courtyard at the RAND Corporation in Santa Monica