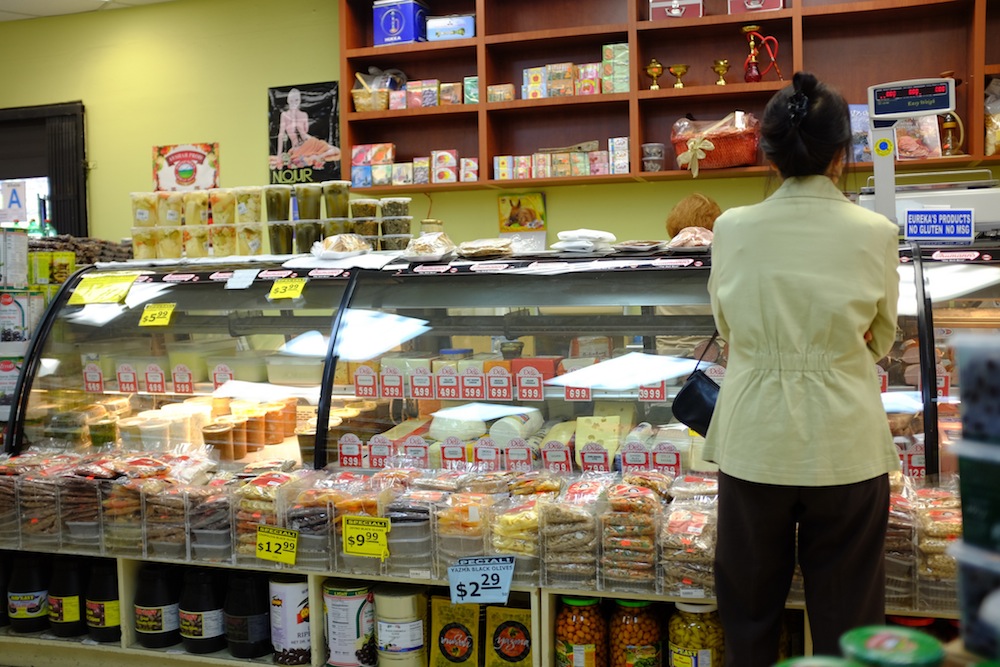 I dreaded Saturday mornings when I was growing up. That’s because while other kids were waking up to watch cartoons or making movie plans with friends (so I imagined), I was ritually dragged into the Armenian markets of Los Angeles by my mother, who bought food as if it was a competitive sport.

“Get up, we’re going shopping,” she would say. She never meant at the Vons or Ralphs grocery chains, where you could buy waffles and milk. She meant at one of the markets in Glendale or Burbank or Pasadena where I could find huge rolls of fresh unleavened lavash bread that amounted to double my height when fully spread across a table. A market with yogurt soda, a carbonated, fermented drink seasoned with pepper and mint.


The smell of pickled cucumbers in plastic jars permeated through the store, mixing in with the scent of ground coffee that produced the thick mud-like drink consumed at every family gathering.

As a kid growing up in Los Angeles in the ‘90s who could not identify with the synthesizer-backed Armenian songs that blared during family celebrations, or the video cassettes of sketch comedy skits imported from Armenia that my parents couldn’t wait to get their hands on, I didn’t understand the importance of these markets. I didn’t get that there was a communal hunger they were trying to satiate.

Armenians have always lived in a wide swath of terrain that stretches from Iran to Caucasus to the Mediterranean. We began migrating to the U.S. as early as the 19th century. That migration has always come in waves, thanks to war and political turmoil. One wave in particular changed the course of thousands of years of Armenian history.

One hundred years ago today, the Ottoman Empire began an ethnic cleansing campaign against its Armenian, Assyrian, and Greek populations, rounding up and killing several hundred Armenian intellectuals. Over the next few years, some 1.5 million Armenians were killed and over 100,000 children left orphaned because of their ethnicity—acts that scholars, several governments around the world, Armenians, and even the Pope have condemned as genocide, even if the Turkish government refuses to acknowledge it as such. Among its deeply unsettling, long-lasting effects, the genocide made Armenians feel lost about where “home” actually was.

Many of those who survived were taken in as refugees in Middle Eastern countries, but events like the Lebanese Civil War and Iranian Revolution uprooted Armenians again, bringing them en masse to America throughout the 1980s and ‘90s. This is what happened to my family. I was born in Tehran, but, after the revolution, the institution of Sharia law and the war with Iraq made life for almost all Iranians more difficult. The final straw for my parents came in 1989 when they put up lights on a Christmas tree that could be seen from the street and a paramilitary volunteer militia burst into our home with machine guns. They mistakenly thought the Christmas lights meant we were having a party with alcohol, which was forbidden. My parents decided this was no place for their young children.

The majority of Armenian immigrants to the U.S. came to California, and the Golden State still claims the largest population of Armenians in the U.S. While many Armenians first settled in Fresno—due to the San Joaquin Valley’s agricultural opportunities and arid landscape, which reminded them of their ancestral homelands—the Los Angeles area became the cultural stronghold for the Armenian-American diaspora, where churches, organizations and various businesses flourished from Glendale to the Valley. After stopping in Greece first, my family settled in the L.A. area because like many Armenians, we had relatives here.

The Armenian markets in Glendale were where you’d find announcements for dinner dances featuring shiny-haired Armenian singers in terribly outdated suits and advertisements for translation services—an allure my mother could not resist. We went every week, unless our market day fell on April 24. The markets were always closed that day, in honor of the Armenian genocide.

Whenever we went to the markets, I hid behind the cart as my mom pushed through aisles of olive oil, rose petal jam and pomegranate paste. I wanted to run away every time I caught a glimpse of the “evil eye trinkets” hanging by the check-out counter—talismans to be hung in homes, cars, and even on baby diapers, to ward off misfortune.

In the winter, you could find cow’s feet soup, a delicacy that traditionally helped Armenians survive the cold season, even though there was no real need for it in the year-round temperateness of L.A. Donkey oil from the Armenian-populated village of Gharaghan, Iran, was prized as a medicine akin to Neosporin.

Patriotic songs blared over megaphones installed throughout the entire store and paintings of Mount Ararat, the biblical mountain that functions as a unifying symbol for Armenians across the world, loomed overhead. The smell of pickled cucumbers in plastic jars permeated through the store, mixing in with the scent of ground coffee that produced the thick mud-like drink consumed at every family gathering.

When I was young, the entire experience was overwhelming. The stores we frequented were so compact that there was nowhere to hide from the wandering grandmothers who tried to talk to me as if I was their own progeny. The saran-wrapped lamb’s head at the deli counter among bologna and mortadella sausages haunted me, and I often begged to be allowed to wait in the car.

As I grew up, the shopping trips gradually stopped. I was busy refining the American part of my Armenian-American identity. When I entered adulthood, however, I began to return to the same markets I had built up such a strong aversion to—and noticed that my aversion had turned into nostalgia.

The markets were brimming with the same characters from my childhood, and I was glad to see the haggling grandmothers I once feared. I loaded up my cart with tarragon soda, Medjool dates, and pickled shallots—the purchases of someone who had been born in the Middle East, grew up in a diaspora and visited Post-Soviet Armenia as often as she could. I offered to run errands there for my mom.

Soon I began to visit the markets even when I didn’t immediately need anything. I wanted to be there, in the midst of the chaos, squeezing between the men and women on a quest to find the best cucumber, to soak in the spice-laden atmosphere. This market wasn’t a place I wanted to escape from anymore, but its own kind of refuge.

The Armenian markets became a place that transported me from the mundane of every day life. I looked forward to asking whoever was at the deli counter, in Armenian, if he could please give me a half-pound of the most flavorful Feta cheese I had ever tasted.

Going through the cramped maze was far more appealing than large, slick corporate supermarkets where everything is strategically positioned to make you buy something. It made me feel rooted, grounded, part of a community that I didn’t even understand I belonged to until I was back in the chaos of the market as a young adult.

On a recent trip there I overheard a young girl helping her grandfather read English labels on wines imported from Armenia, where wine cultivation has remerged as an exciting industry. She read several labels out loud until he finally made his choice and then off they went to check out. I envied the ease with which she wore her multiple identities. But then I quickly went back to piling pomegranates in my plastic bag. I wanted to select the best ones, before anyone else had a chance to get to them.