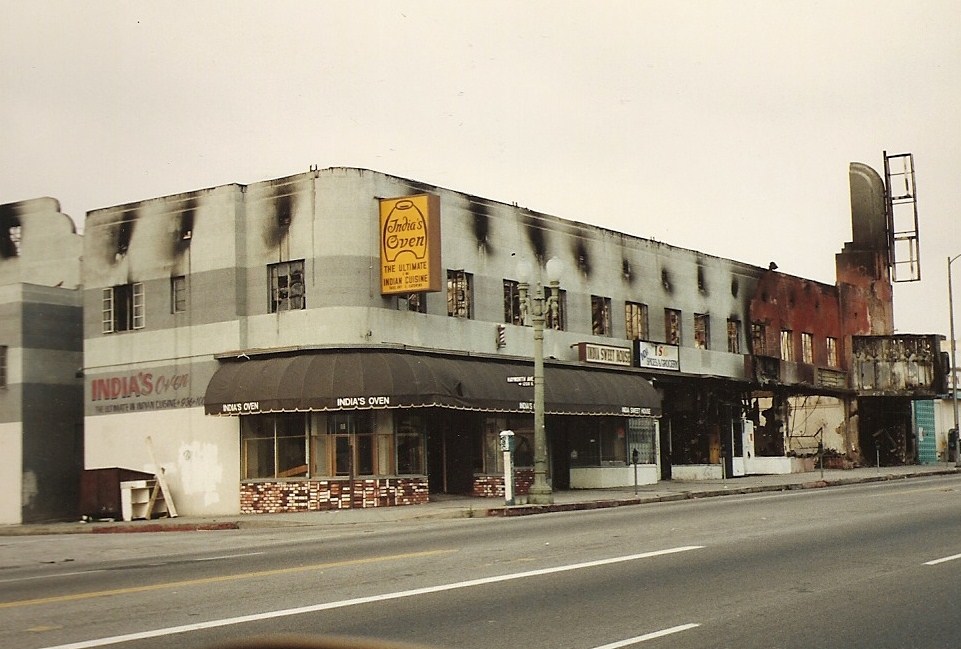 I didn’t set out to write a book about the 1992 L.A. riots. In fact, if anyone had told me I’d end up writing a novel featuring 17 different first-person narrators that spanned all six days of the riots—from April 29 to May 4—the scale would have terrified me, and I might have quit before I began.

It all started with Payasa. A gang-involved girl growing up in the city of Lynwood, just east of Watts, she was a figment so tenacious that I couldn’t get her out of my mind. In my experience, it’s not often that a fictional character insists on existing. When it happens, I know I need to follow wherever he or she leads.

Perhaps I should explain how this girl, this voice in my head, came to be.

In 2011, I’d been living in L.A. for three years and was working with the artists and muralists of UGLAR (Unified Group of L.A. Residents), doing an internship of sorts. It came at just the right time for me; I’d spent seven years writing a book that never got published, and I needed something else on which to focus. When I’d met the guys some months previously, we clicked immediately, and before long, they’d asked me, a non-visual artist, to be a part of their crew. I said yes in a heartbeat.

We all agreed it was an experiment, but before we saw how we might mesh together as artists with different disciplines, I had to learn what they did. So I carried paint for murals, photographed the progress of our walls, and cleaned up. The work took me to areas of the city I—a guy who’d grown up in Colorado—had never seen before, much less knew existed: Lincoln Heights, Highland Park, Lynwood, and others.

In these parts of L.A., I saw the city’s temperament and texture. I began to understand its disparate cultures and its people. I spoke to the homeless and the jobless, but the people I was most drawn to were former gang members, most of them Latino. They had a different take on their city than I’d heard before, and the way they talked lit up my brain.

I have an aural memory. When people speak, I visualize how what they say would be written. I map sentence structures in my head while listening. I visualize rhythms of speech, so I can make them live on the page. Brick by brick, our discussions about everything from tattoos to tacos built the foundation for Payasa. When I knew how they spoke, I knew how she would speak, and in this way, she gained form and style.

When I first told a number of former Latino gang members I’d been speaking to that I was contemplating writing a female character who lived that same life and would have grown up in their neighborhood, I met with strong resistance. I was told women were not involved in the gang life as I thought they were.

I tried to give up on Payasa then, for the sake of authenticity, but she wouldn’t let me. I’d be waiting for the 720 bus, and she’d spout lines about the sky or the person standing next to me, or what she wanted from life. This went on for days. When she wouldn’t go away, I knew I had to do something. I had to engineer a plot device that would give her the freedom not only to exist in the gang world of Los Angeles, but to craft her own destiny.

When this realization hit, I knew I had to write her story. It came chunks at a time: two, three, even four chapters a day. Her voice flew at me, and I did all I could to type as fast as I heard it. Within a week, her section was done, and it remains largely unchanged in the finished novel.

I ran Payasa by the folks I had been talking to, certain they’d think she couldn’t exist in their world of 23 years ago, and as I finished telling them about her and her story, I braced myself to be shut down. Instead, I heard, “I was into it!” and best of all, “Wow, man, I like her.”

This, I found with relief, not only made her real but also alleviated my deepest worry. I felt it necessary to prove to the people who spoke to me that I would write about their neighborhoods with respect and honor—that, no matter what, I would take the time to get it right, detail by detail. When I got their blessings, it meant that my Payasa fit within the world they’d once known.

It was a victory, but it opened the door to a much graver project: what was once just a single character’s story was now the story of an entire city during its most incendiary days. I remember standing in my kitchen at 13, watching what happened to Reginald Denny on the news, and I felt an immense responsibility to get that era right.

There was only one way to do it: research. I watched every documentary I could. I immersed myself in L.A. Times microfiche. I read books like Twilight: Los Angeles 1992 by Anna Deveare Smith and Fires & Furies by Maj. Gen. James Delk. As I worked my way through these, I learned something interesting: An awful lot has been written about the riots in many different mediums, but not in fiction. In fact, the last few chapters of The Tattooed Soldier by Héctor Tobar are the only fictional account I can name, though I’m sure there are more.

All the same, this emboldened me to tell a wider story. I watched and re-watched news reports and raw footage on YouTube from that time. Most importantly, I kept speaking to people who knew the city better than I did and who were there in ’92. They could tell me how it felt, what most scared them, and what they most hoped for back then. Through their generosity, I grew to understand not just the psychology of the time, but the psychology of survival.

And through it all, facts emerged. Facts so heavy they not only weighed on my heart, but inspired me to explore them through the eyes of new characters. I learned of the Lynwood Vikings—a then-secret group within the L.A. Sheriff’s Department that a federal judge proclaimed a “neo-Nazi white supremacist gang.” I learned of Navy SEAL medics doing combat internships with the L.A. Fire Department due to the sheer volume of trauma injuries at that time; I learned that murders that took place in non-riot-related areas were not considered riot-related even though a lack of police or emergency assistance may have made them possible; I learned of portable morgues—refrigerated semi-truck trailers used to temporarily house the dead; I learned of the over 3,000 guns stolen during the riots, most of which have not been recovered, even to this day.

Throughout this journey, my eyes have opened to the recent history of Los Angeles—its depth and its difficulties—and I think, in some small way, I uncovered a buried city hidden just beneath the one I knew. What I saw when I emerged from my research was a city that both explained the present and shaded it, adding tones of grayness where previously things had been more starkly black and white. Yet it never would have happened without Payasa’s insistence to exist on the page. Without her, there would be no novel.

She started it all.