2014 was not an especially good year for the Ports of Los Angeles and Long Beach.

Adjacent to each other on San Pedro Bay, the two ports are collectively the nation’s largest maritime gateway and indispensable economic engines for Southern California. Although they combined last year to handle more shipping containers than in any year since the Great Recession, they were beset with logistical and labor problems that led to costly delays in maritime trade.

But next year may be worse, especially if the ports do not use this year to get their houses in order.

Sometime in 2016, the Panama Canal Authority will open a huge new set of locks that will be able to accommodate vessels carrying up to three times the amount of cargo of ships that now traverse the century-old canal.

I gained a keen appreciation of the expansion project’s enormity during a visit arranged by the Panama Canal Authority last November. Some sense of the project’s scale can be seen in the photo below. Here, I’m standing next to one of the massive Italian-made gates being installed. Taking in the sight from the bottom of the new locks at the canal’s Pacific entrance, I was reminded of the gigantic sets of C.B. DeMille and D.W. Griffiths’ Biblical epics. 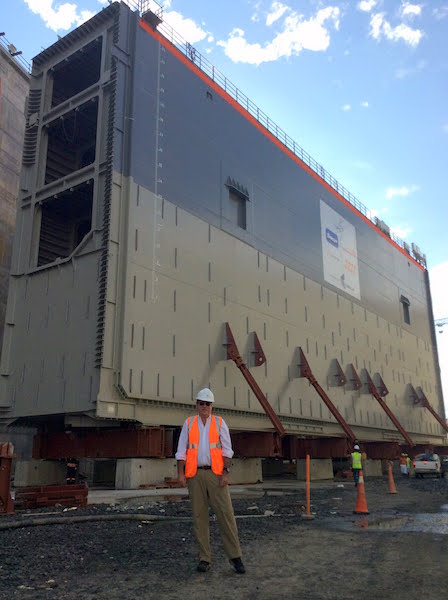 Since most Americans live east of the Rockies, the opening of a broad new all-water route to ports along the East and Gulf Coasts should – at least in theory — offer a more expeditious way for the nation’s most populous industrial centers to trade with China, Japan, South Korea, Taiwan and other East Asian economies.

Currently, ports along the West Coast dominate America’s transpacific maritime trade. In dollar terms, 54.1 percent of America’s containerized trade with the Far East passed through the San Pedro Bay ports in 2014. But it doesn’t have to be that way. Most of the inbound cargo at the two San Pedro ports is sent by rail or road to markets outside of Southern California. So these shipments are considered discretionary cargo, goods whose owners currently opt to use the Ports of Los Angeles and Long Beach over competing ports elsewhere in the country (and even in Canada and Mexico).

The intermodal system that connects the two San Pedro ports with customers around the country includes a vast complex of warehouses and distribution centers that sprawls out from the docks into the Inland Empire and even over the Tehachapis into the southern San Joaquin Valley. In this way, the movement of cargo through the ports supports hundreds of thousands of jobs in Southern California; 250,000 of those are in the transportation and warehousing sector.

So the prospect that shippers might route more cargo through the expanded Panama Canal represents a daunting challenge not only to the San Pedro ports, but to all of Southern California. And that was true even before last year’s congestion at the West Coast ports, and the resulting blow to the ports’ reputation.

The ports were badly congested for two reasons: the arrival of ships that were too big for them to handle, and snafus involving the availability of the chassis needed to move containers. Then, in late October, the dispute over a new longshore workers’ labor contract spilled onto the docks. By year’s end, near gridlock conditions gripped the ports, giving shippers a particularly sharp incentive to consider using other routes and other ports to serve their customers nationally.

As a historical matter, the new threat from the Panama Canal seems ironic. It was the opening of the Panama Canal a century ago that arguably set the then-fledgling ports of Los Angeles and Long Beach on their paths to West Coast maritime trade dominance.

Until the canal was built, the center of maritime commerce on the West Coast was San Francisco Bay. At the start of the 20th century, with a population of 343,000, San Francisco was the nation’s ninth largest city. Los Angeles, by comparison, ranked 36th, with just 102,000 residents. Even within Southern California, San Diego was thought to have been better suited for development as a commercial seaport.

Things soon changed, as railroads and weather and agriculture drew people here. By 1920, L.A.’s populace had grown to 577,000, eclipsing San Francisco’s residential count and creating a new consumer market that drove more traffic to the ports. Then the opening of the Panama Canal brought the San Pedro Bay ports more directly into global shipping lanes.

Geography favored L.A. over San Francisco once the canal began accepting ships. As UC San Diego’s Steven P. Erie observes in his classic 2004 study, Globalizing L.A., “San Pedro was positioned on the earth’s curvature just [70] miles off the great-circle route between the canal and Asia.” This location, he submits, made it the most convenient port of call on the West Coast for America’s expanding transpacific trade.

Still, the San Pedro Bay ports offered little for sea captains to sail away with. Local industry, while swiftly emerging in tandem with the region’s population explosion, was still not producing sufficient exports.

Until the discovery of oil.

The canal, which had initially opened in August 1914 but had effectively shut to commercial shipping by the First World War, re-opened again in 1921, just in time for the oil boom in Southern California. Oil wells in Los Angeles and Long Beach began spilling out more crude than the local market or refineries could handle.

Fortuitously, the canal offered a means of getting all that oil to refineries in the East. Between 1922 and 1924, every available ship was used to carry oil as the number of barrels of oil shipped out of the Port of Los Angeles alone increased from 21 million to 138 million.

Eventually, as America’s trade with the Far East steadily expanded, especially after China emerged as “the world’s factory,” the San Pedro ports became the nation’s premier gateway for maritime commerce. But, where the digging of a canal through the Isthmus of Panama a century ago initially was a boon to the Ports of Los Angeles and Long Beach, the construction of a bigger “ditch” through Panama now poses a new competitive threat to the San Pedro Bay ports and all those who depend on them for their jobs.