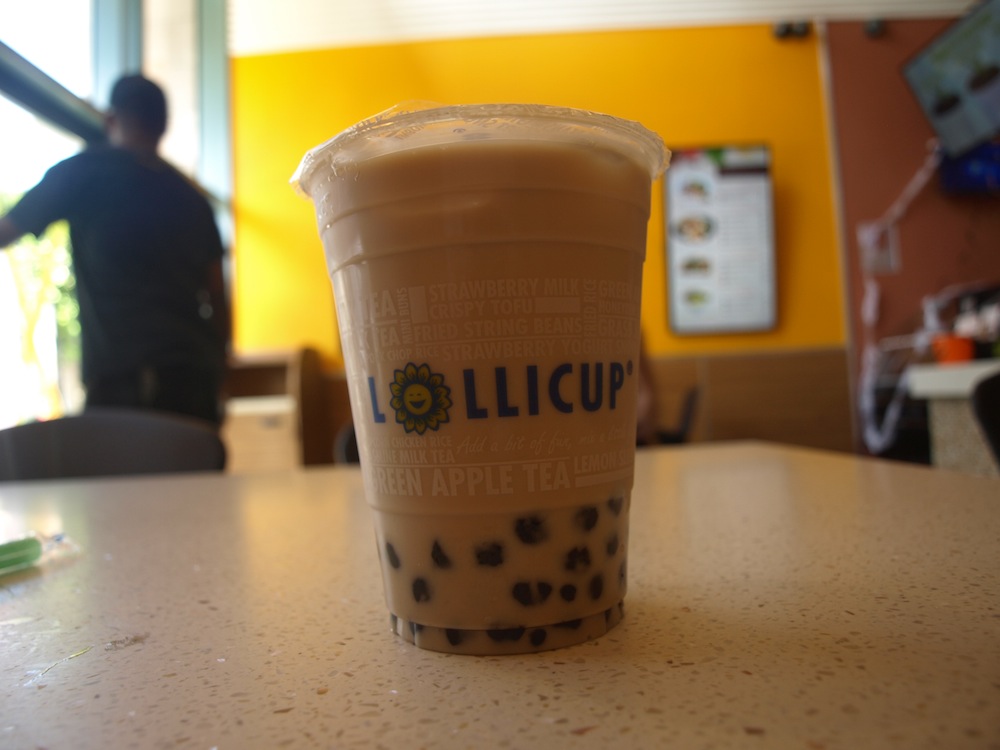 I have tried a lot of boba tea. And when I say “a lot,” I mean I’ve visited over 200 tea houses that sell these beverages—teas in a variety of flavors, typically served on ice and featuring chewy tapioca balls—in the last year.

You counted right: In a typical week, I visit two to four different L.A.-area boba tea houses. A few months back, for example, I heard about the special Hokkaido milk cream drink at TBay in San Gabriel—one of only two boba tea houses in L.A. that serve this thickly sweet tea topped with cream-flecked with sea salt. I had to try it, so I traveled over 90 minutes on two buses from my apartment in downtown L.A. to TBay, which is located in the heart of the San Gabriel Valley. These trips always feel like a coin toss, because I never know if it will be worth it. In this case, it was. The tea under the foam was rich in delicate green tea taste, and the top had an amazingly creamy texture with a butterscotch tinge. It was richer and the flavors were more layered than other buttery sea salt drinks I’ve tasted.

I have been hooked on boba since the fourth grade, when a friend’s mom brewed some kind of black Chinese tea, added a generous helping of milk, and spooned in dark, marble-sized spheres she had just finished boiling. It was the first time I realized that there was a way to chew on a drink. There was something addicting about biting down on squishy black tapioca balls and sipping milk tea at the same time.

Growing up in Fremont, in the San Francisco Bay area, I was surrounded by Chinese-Americans. Many of us ate foods like chicken feet, were interested in Chinese pop music, and had to help our parents with English. That all changed in middle school, when my family moved to Seattle. I quickly became known as “that one Chinese kid” in a predominantly white school. No one knew what dim sum was, and it seemed like everyone had some intergenerational Super Bowl tradition that felt foreign to me.

Then, on a trip to the Northgate Mall a few years later, I bought my first boba drink. I think it was a green apple smoothie, and my high school self just ordered it because it was colorful. The top was sealed with a film of plastic that I couldn’t figure out how to open until the tea house cashier told me to poke my extra-wide straw through. It was an embarrassing moment, but it also gave me a chance to finally engage with something Asian-American that I could hold with two hands.

While I can’t say that boba led me to major in Asian-American studies as an undergraduate at UC Berkeley, I was passionate about both boba and my major because they allowed me to express my identity to the world around me. Being Asian-American is no longer just a series of thoughts and memories that float inside my head, or relationships that I understand emotionally, but also something I can actually physically consume.

At a department dinner during my third year as an undergraduate student, I came to appreciate boba even more when a professor told me about how in 18th- and 19th-century China, colonialism and capitalism led to the erasure of many beliefs, relationships, and institutions—including those related to tea—and transformed what was in the present into relics of the past. Up until the 18th century, Chinese tea was primarily produced in brick form. After the British introduced tea bags, using bricks became mostly just a way of indulging in “traditional” Chinese culture. Tea bricks became artifacts, and artifacts—unlike items we use in the present—don’t change. Chinese tea culture, which had evolved over centuries, got stuck into one process: pouring tea into a cup, letting the flavor of the leaves escape, and drinking the beverage while hot. Eventually, tea itself became thought of as “traditional” rather than as a dynamic part of Chinese culture. In a way, boba milk tea helps members of the Asian diaspora to once again play a role in making Chinese culture something that evolves and grows.

Boba was invented in Taiwan, but it’s been made Asian-American in places like Southern California, where there are a panoply of different boba drinks available. Here, iced milk drinks—which are sweetened with honey—are common. There are also dirty horchata drinks that mix the milky Mexican cinnamon and rice beverage horchata with boba and shots of espresso, as well as mung bean milk teas that incorporate pandan (a tropical fruit from Southeast Asia), mung beans, and freshly brewed tea. And, Vietnamese and Thai restaurants around California add boba to Vietnamese iced coffee and Thai tea.

A few months after graduating from college, in December 2013, I brought up the idea of starting a boba blog with my cousins as we drank hot milk tea from a popular shop in Chicago. After taking a picture of that cup of tea, I realized I already had a vast collection of photos that brought to life the reach of boba around the nation. My blog, Bobaholic, was born in 2014, and today features images and reviews of drinks from more than 170 boba tea shops.

Most of these boba adventures involve one to two hour bus rides around Los Angeles and Orange counties. (I don’t have a car, but that’s not going to stop me from finding Southern California’s tastiest boba.) These tea houses range from being spacious and colorful shops full of sofas and comfortable chairs populated by local teenagers to grab-and-go places in shopping malls. They’re full of Asian-Americans from multiple ethnic backgrounds, such as Chinese-American, Vietnamese-American, Thai-American, Filipino-American, and so on. While I come across people from all kinds of backgrounds in my boba adventures, the fact that this is a phenomenon among young Asian-Americans is hard to dispute.

Some naysayers have called boba a fad that dissipated a few years ago. But the beauty of it is that boba drinks are always changing; someone is always coming up with a new flavor or style or dimension.

When my mom found out that 4,600 people were following my blog, she guffawed. She couldn’t understand why I just couldn’t be content with boiling some green tea every night like she does. I told her that green tea was green tea thousands of years ago, and there’s nothing to suggest that it won’t be green tea tomorrow. But with boba, people like sea salt green teas today, and tomorrow who knows what new flavor they’ll invent?

The next drink on my list is “potted milk tea.” Tea mixed with milk is topped with a layer of whipped cream, then a layer of Oreo crumbs, and finished off with a mint leaf or two—so it kind of looks like you’re drinking a “potted” plant. It’s nothing like what my mom drinks, or what my grandmother drinks—and I’m almost hopeful that one day it will even seem old-fashioned to my own kids, who can participate in a culture that is constantly evolving.