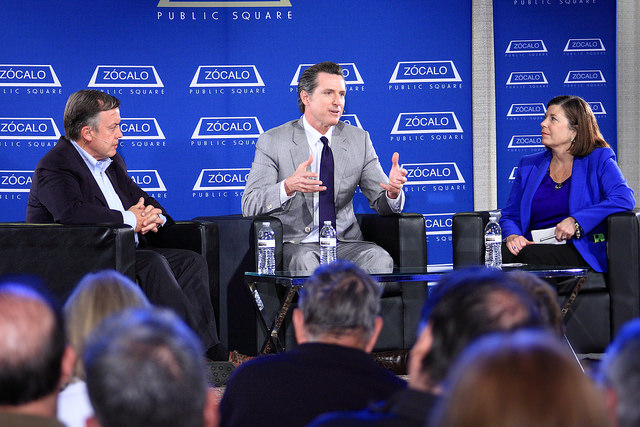 What if you could learn to sing like Maria Callas, theorize like Stephen Hawking, and, at the same time, become fluent in Russian and French? What if you could accomplish all that in just three years? Impossible, right?

Not if Arizona State University President Michael Crow has his way. At a Zócalo event moderated by Sacramento Bee publisher Cheryl Dell, Crow and California Lt. Gov. Gavin Newsom shared their ideas about higher education’s evolution into the future, and what it will take to keep up with an ever-shrinking world and ever-growing technological capabilities.

In front of the sizeable crowd at Sacramento’s Tsakopoulos Library Galleria Monday night, Crow and Newsom talked about the importance of instilling young people with a love of lifelong learning, and the responsibility to reach out to a greater variety and breadth of students from across income levels and backgrounds.

At the heart of the conversation was how to handle the much-talked-about higher education buzz term Massive Online Open Courses (MOOC), which are designed to bring lessons to wider groups of people online. Newsom and Crow pitched their voices into debunking the myth that a virtual or technologically driven method for creating and delivering course material is a threat to real-life faculty. They said that MOOCs weren’t some watered down version of “real” classes.

“I think people are imagining that you’re in your basement, and you’re looking at your screen and you mother’s yelling at you, ‘When are you going to pick up the yard?’” Crow said. “That’s not what’s happening. You’re talking about the intensification of education.”

It’s more intense because it allows teachers to ask students to solve practical problems that might occur in the “outside world,” enabling the lessons to stick. For instance, after a lesson on the web, students could work on creating a nutritional treatment plan for a relative who falls ill. And students can learn in a hands-on way in a manner that they couldn’t before—exploring concepts in physics, for example, in a way that is similar to how the video game Spore teaches economics without overtly stating what it’s doing.

To bolster his claim that a turn towards online classes is not about making it easier to slack off, Crow pointed out that some of the country’s most prestigious schools are actually leading the pack when it comes to MOOCs.

To launch the Global Freshman Academy, which offers a full accredited first-year curriculum, for instance, ASU is partnering with the education non-profit called edX that was created by MIT and Harvard, and is headed by MIT professor Anant Agarwal.

Newsom nodded in agreement about the potential for this kind of learning by experience and customization to reach students who would have been left out of traditional colleges. This was something he saw firsthand because he grew up with a debilitating learning disability (dyslexia). Of course, back then, he quipped, this kind of learning “was called alternative education.”

“We no longer have a monopoly on higher education. Something big is happening in this world, we either embrace it or we’re on that collision course with the future,” Newsom said.

The 59-year-old Crow acknowledged that this reframing of how one acquires knowledge, particularly for baby boomers, is “extremely difficult for us. People my age, they cannot conceptualize this. It’s beyond our ability.”

There was also some playful sparring onstage, as when Crow dropped that ASU is “producing more Native American graduates than the entire California system combined.” Newsom responded: “That’s what gets our backs up. Keep going.”

And persist he did. As the conversation drew to a close, Dell said, “One of the points I wanted to be sure we made is that 10 percent of students at ASU are from California”—to which Crow quickly replied that that number was higher.

Newsom acknowledged that the California system needs to be asking more questions about how exactly to rethink universities.

The current university system, Newsom said, is “no longer relevant to the world we live in. … We’re still paving over the old cow path here in California.” While California of the 1960s had a clearly defined, ambitious master plan for higher education, Newsom was not sure that the California of today had an “actual delivery system to meet the white waters around us.”

Affordability and access for students from all social strata were issues of concern for both men.

One particular initiative of ASU’s that has turned a lot of heads is the school’s “College Achievement Plan,” a partnership with Starbucks. In the plan, the coffee chain offers to foot full- and part-time employees’ full tuition so that they may earn a degree in more than 40 online degree programs.

It’s impossible to increase graduation rates across the board, and raise performance standards with the way that things are run now at universities, Crow said. “There’s no way to do that with existing models unless you … [are] only admitting geniuses.”

Dell threw out a question for the parents in the audience who are trying to weigh all the options for where their child should attend college. Knowing about the grades of the incoming class and whom the university counts as distinguished alumni doesn’t always tell parents how successful a student will be at a particular college or in life afterward, she said. “What should we be asking for our children to be getting out of universities?”

Crow’s answer: How to “best express individual learning identity.” In other words, he explained, graduating with a certain major is less important than triggering the sense of excitement around learning that will propel a young person toward trying to unlock solutions to problems for the rest of his or her life.

“Where will [your brain] be activated at a whole new scale?” Crow said. He thought that this would come through interdisciplinary programs that aren’t confined to one particular field or another.

Dell, Newsom, and Crow were even willing to challenge the sanctity of universities’ traditional timeframe.

“Stop calling them four-year colleges,” Crow said. “We want speed learning [and to] deepen, broaden, and individualize learning. We’re in the early stages of figuring out how to do that.” 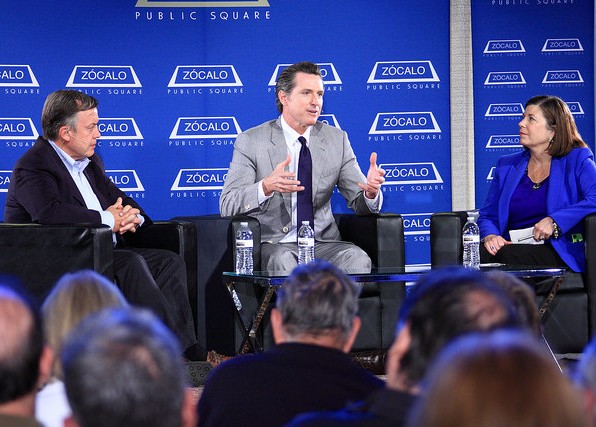 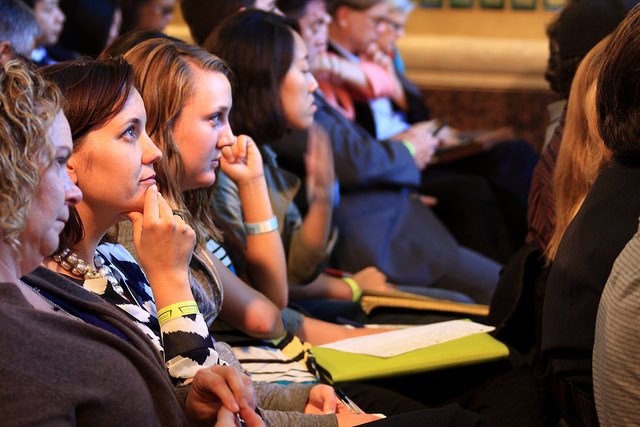 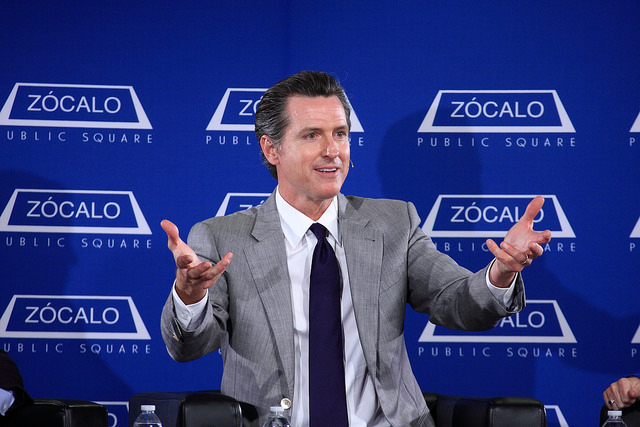 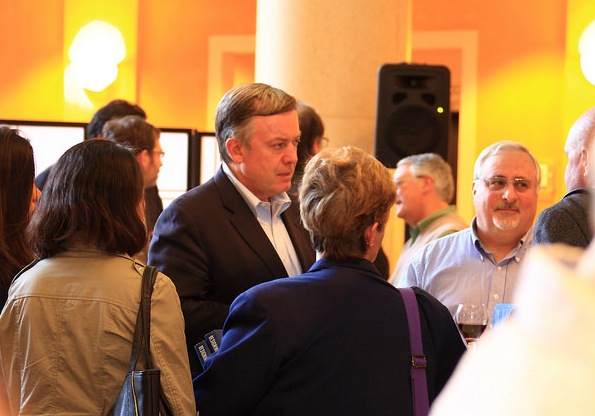 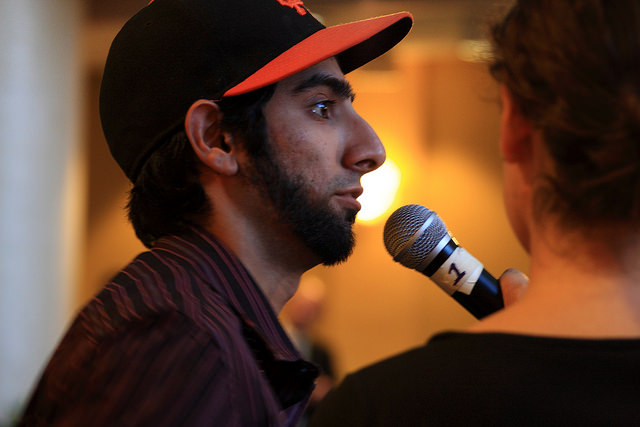 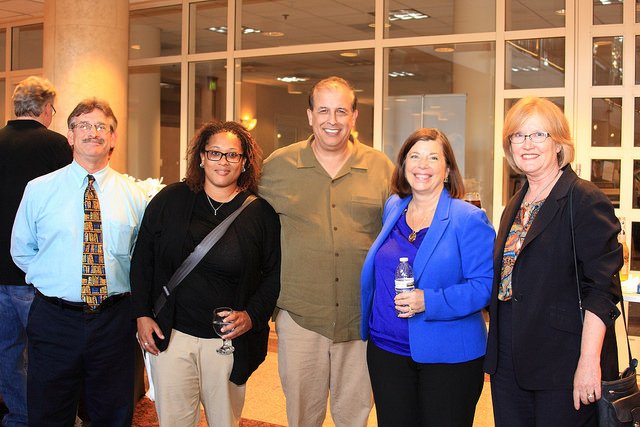 Guests with moderator and publisher of The Sacramento Bee Cheryl Dell, second to the right