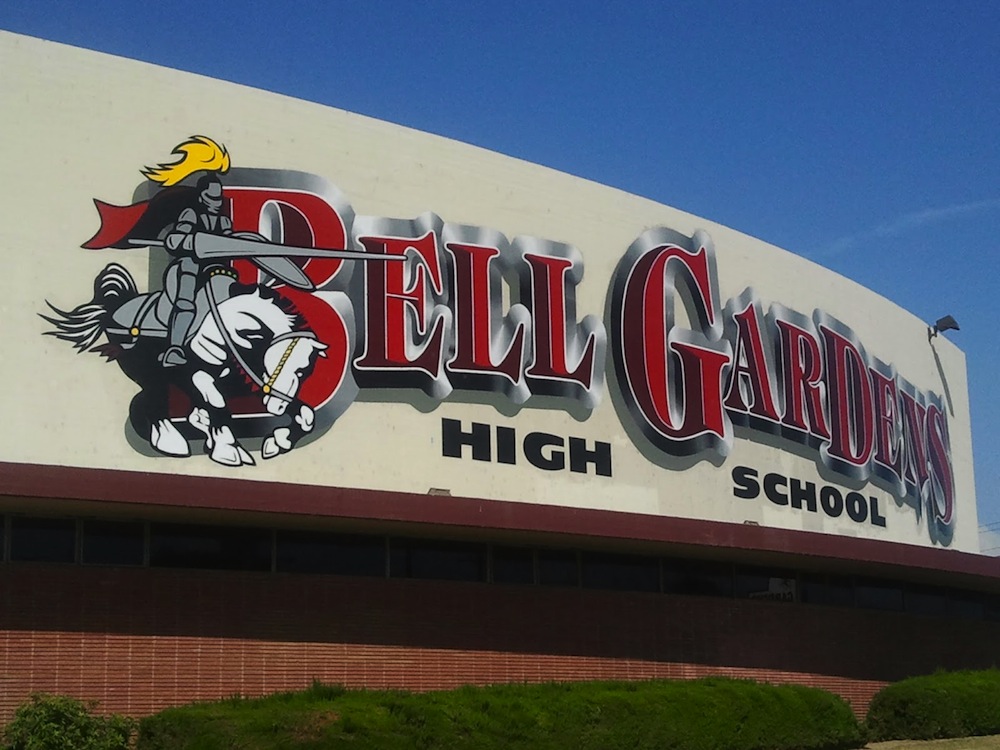 Bell Gardens High School in east Los Angeles County was a sorry mess when science teacher Liz Lowe arrived in 1989. It was overflowing with trailer classrooms and graffiti. More than 3,000 students crowded into school buildings surrounding a concrete quadrangle with patches of grass and some trees. Expectations were low. Not much learning was done.

“It hurt my soul that here were these wonderful students who were very, very capable, but they were expected to be the working poor,” Lowe recalled. They needed an opportunity to go to college, but that goal was elusive in a place that encapsulated what a certain president famously called “the soft bigotry of low expectations.”

Today, that community is still poor and ethnically isolated. Bell Gardens High, with a student body that is 99 percent Latino, is one of the least diverse schools in the country. According to the 2010 census, the education level of its students’ parents was the lowest of any community of similar size in the state: 55 percent had not graduated from high school, and just 17 percent had gone on to obtain at least some college credits. More than 92 percent of students were from families poor enough to qualify for federal lunch subsidies. The median household annual income was slightly more than $30,000.


The director of San Diego’s seminar program for gifted children tried to steal her students so he would no longer be criticized for having so few minorities.

Yet something unexpected has happened to the level of learning at the school. Bell Gardens High’s Academic Performance Index score, the 1,000-point scale that was used by California to measure test score success, has gone from 469 in 1999 to 704 in 2013 (the latest reported year), a 50 percent gain. Attendance is up to 95 percent. The school now offers 18 Advanced Placement course subjects and was ranked in the top 7 percent of all U.S. schools on the 2015 America’s Most Challenging High Schools list, a measure of college-level test participation I put out each year for The Washington Post.

Many changes in the school’s philosophy, faculty, and resources have helped it become such a vivid example of the potential of low-income Hispanic children. But Bell Gardens educators and parents agree that a program called AVID, short for Advancement Via Individual Determination, has much to do with the transformation.

Non-profit AVID (pronounced like the word that means “eager”) is the largest college readiness program in the country. Its success has much to do with unusually effective teacher training and a tutoring system that goes deeper than any I have ever seen.

AVID has 400,000 students in 5,000 schools in 44 states and several countries. It began in 1980 when Mary Catherine Swanson, the head of the English department at Clairemont High School in northern San Diego, decided to experiment with 32 low-income students coming to her suburban school as part of a busing program. Many teachers at her school said those Latino and black children should be put in remedial classes, but Swanson felt that if they were placed in a daily class that taught study skills and time management and provided tutoring, they could eventually handle even college-level Advanced Placement classes.

It worked, but not without much adversity. Some teachers were so disbelieving of the AVID students’ good work in their classes they accused Swanson of helping them cheat. Her first principal was supportive of the program, but the next one tried to kill it. The director of San Diego’s seminar program for gifted children tried to steal her students so he would no longer be criticized for having so few minorities.

In 1986 Swanson began to work with the San Diego County Education Department to spread AVID throughout the county and the state. State legislators were so taken with the results that they gave AVID its own line in the budget. School superintendents as far away as Virginia began to hear about AVID’s success, buttressed by data that Swanson insisted every school collect. They asked if they could have AVID, too.

As Bell Gardens learned, despite the positive headlines, the program was not easy. AVID classes demanded that students keep their work in order and, even more shocking to American teenagers, required that they learn how to take notes properly and do so in all of their courses. The tutoring was even more of a challenge.

Every Tuesday and Thursday, tutors, usually college students, would arrive to help students with homework questions that stumped them. The tutors did not follow the usual practice of telling tutees where they went wrong. Instead they trained the students, in tutorial groups of no more than seven, to ask questions of whomever was discussing a particular difficulty, to help think through the problem.

For example, in a recent 9th grade AVID class, a student had not recorded the steps she was taking on a math problem on the whiteboard she held up for the other students in the tutorial to inspect. AVID teacher Mirna Underwood, roaming the room, stopped her mid-class and asked her what was missing from her board. The student added the words: “Steps: 1. Write expression. 2. Factor numerator and denominator.”

The tutor who was there asked the group for more questions: “How can you help your classmate?”

“What is the difference between these equations, so what are you missing?” one said.

It takes weeks, sometimes months, to get the hang of it.

Lowe, now the AVID coordinator at Bell Gardens, in 1994 was the first teacher at the school to get the one-week AVID training course. But it took three years for Bell Gardens to start its program. Juan Herrera, now the school’s principal, was then the school’s state and federal project director. He was very taken with the AVID emphasis on recruiting average low-income students. His father had been a janitor, his mother a seamstress. Kids like him tended to be left out, he thought, even though they would have benefited from an extra push.

State and district backing for the program has been helpful. Bell Gardens has about $115,000 for tutors this year. Its AVID program grew from 29 ninth graders in 1997 to 566 students, about 16 percent of the total school enrollment this year. The school has 18 AVID classes. It became so successful maintaining standards that it achieved National Demonstration School status, a designation given to only two percent of AVID schools.

Mario Martin del Campo, a former Bell Garden AVID student who became an AVID tutor, said he noticed at California State University, Northridge, where he was an English major, that students without AVID experience often gave up. They’d just say, “I don’t get it.” By contrast, del Campo said, his reaction to a difficult college assignment would be “I don’t know how to do it but I’m going to try it and see how far I get.” Then, when he finally had to seek help from another student or the professor, he saved much time by being able to say “this is the point where I just don’t understand it.”

With the support she gets from the district, Lowe said, she can welcome to AVID even students whose grades appear too low or whose habits seem too erratic to do the work AVID requires. “Many times they will come to me and want to get out,” she said. “I say, ‘You know? You need to hang on a little bit longer.’”

The AVID classes become as much a club as a course. Students make friends. They help each other out. It makes Bell Gardens High School a very different place from what it was in 1989. Educators like Lowe and Herrera think more schools stuck in poverty could make the same transition, if they are willing to fight for the money and make it extremely difficult for their kids to give up on themselves.