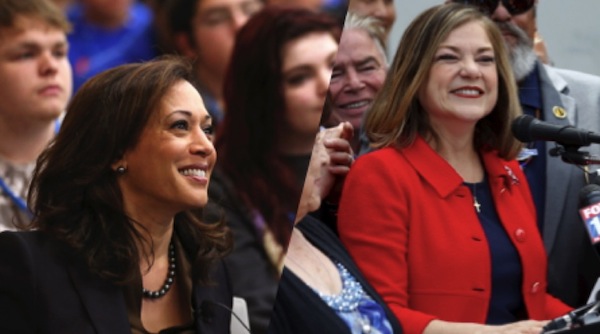 Are you a Kamala or a Loretta?

Attorney General Kamala Harris and Congresswoman Loretta Sanchez—the two leading candidates for the state’s open U.S. Senate seat next year—confront Californians with a choice. But it’s not a choice about competing policies or political visions. Californians don’t have political arguments about what we believe anymore. Harris and Sanchez are both Democrats, and we’re a one-party state (Republicans are dying faster than our fisheries), where most people agree on all the big issues. Our disputes these days are over just how many resources to devote to the causes we favor.

No, this is a choice about identity, personality, manners, and culture.

This is about who you are.

And where you live.

Today, we often talk about California as divided between the coast and the inland. But the contest between Harris—who grew up mostly in the Bay Area and has made her adult life there—and Sanchez—a Southern Californian to the core—shows how the differences between San Francisco and greater Los Angeles have both changed, and endured. And the early response to their race—they won’t face each other on the ballot until spring 2016—suggests that those differences could widen into a deeper divide.

While our race- and ethnicity-obsessed media prefer to emphasize that Harris is black and South Asian, and that Sanchez is Latina, the heart of the difference between the candidates, and the two regions, is class.


Sanchez’s signature moment may be when she upset her party’s establishment by seeking to host a Democratic fundraiser at the Playboy Mansion during the 2000 national convention.

Harris comes off as a 21st century aristocrat—poised, disciplined, and distant, even though she’s not really royalty. Her shorthand bio is: raised in the Bay Area by two academics (who also were immigrants), one a professor at Stanford. (The real story is complicated by divorce and a move to Montreal.) She then went on to Howard University—the so-called “Black Harvard”—and to the University of California Hastings for a law degree. In all this, she’s the perfect representative of the rising Bay Area, which has become an upper middle-class island of advanced education that feels more at a remove from the rest of the state. (Every single Bay Area County has a median income significantly higher than the state average.)

Sanchez, on the other hand, was born in Lynwood, a small and poor city in southern Los Angeles County; she graduated high school in working-class Anaheim. She’s one of seven children born to Mexican immigrants; her father was a machinist and her mother a secretary. (The underdog family story is complicated by the fact that her sister Linda is also a member of Congress.) Her bachelor’s degree was from Chapman, an underdog college that has more recently gained renown. In this, she represents a Los Angeles that has become more working-class, with education levels stagnant, median income falling, and fewer payroll jobs now than two decades ago.

In these two contrasting regions, people rise differently. Harris has climbed one of the Bay Area’s many established ladders—in the legal field. Her political rise has been supported by Northern California elites of all sorts—her book, Smart on Crime, even acknowledges the Reagan treasury secretary, George Shultz. Her connections are legion; her sister, Maya, just became Hillary Clinton’s top policy aide.
Sanchez, despite support from labor unions, is an upstart. She emerged out of nowhere to take on Orange County’s entrenched Republicans and knock Bob Dornan out of Congress in 1996. She’s occupied a seat ever since, without ever quite fitting in among D.C. elites.

Harris, with the security of someone who knows where she stands in the Bay Area’s clear pecking order (people there know who their politicians and billionaires are), is direct and decisive in the best San Francisco tradition. She entered the U.S. Senate race quickly and with a well-articulated plan. Sanchez, from a Southern California where the pecking order is far from clear and the powerful can be invisible (Quick: could you recognize billionaire Donald Bren, who built much of Orange County, if you saw him on the street?), played Hamlet for months before getting in the race.

Let’s be clear; you won’t find much difference between the liberal positions and voting records of Northern and Southern Californians. But Bay Area politicians are careful to look as progressive as possible, while Southern Californians prefer to sound less doctrinaire; Sanchez has been a member of the moderate Blue Dog coalition of Democrats.

The differences are in style, particularly in how we talk. Harris follows the Bay Area fashion by inventing jargon to obscure more than explain—her book talks endlessly about “rocking the crime pyramid,” whatever that means. This is very NorCal, a land of people who talk constantly about transparency while being quite opaque. And, like her neighbors in Silicon Valley, she uses the word “disrupt” as if it being disruptive were a good thing. “I believe we can disrupt the dysfunction in D.C.,” she told the state Democratic convention recently.

Sanchez is the SoCal opposite—earthy, bawdy. Her holiday cards have been criticized for being a bit too suggestive (she’s been pictured on a motorcycle in a tank top). Sanchez’s signature moment may be when she upset her party’s establishment by seeking to host a Democratic fundraiser at the Playboy Mansion during the 2000 national convention.

Southern Californians are pretty blasé about loose-talking political figures, and Sanchez has gotten away for years with saying impolitic things that touch on race and ethnicity. Now running statewide, she’ll need to dial back; she got into a heap of trouble for making a “war cry” gesture to describe Native Americans during a talk to Indian Americans.

The reaction to Sanchez’s candidacy has split along geographic lines. Northern pundits, a very politically correct species, have questioned whether someone so gravitas-deficient can be considered a serious candidate. But further south—where people know that politicians practically have to set themselves on fire to get on TV— pundits have responded with versions of, “What’s the big deal?”

Of course, not all of us are Kamalas and Lorettas. You might be a San Diegan Republican from the military (and thus a Rocky Chavez). I had a Kamala upbringing and education, but, as a bombastic Southern Californian with working-class roots, I’m a Loretta at heart.

For now, the Kamalas are ascendant. (So is Kamala Harris in the polls.) Northern California politicians, businesses and unions are in charge, and have set a Bay Area agenda—cleaner and greener—for the whole state. And that will be true as long as Northern Californians continue to vote in far greater numbers than we do in the South, a voter turnout wasteland.

But one day, working-class Los Angeles might awaken from its apathy, and assert itself at the polls. If that happens, California might be a messier place, but more freewheeling and more fun—more like Loretta.