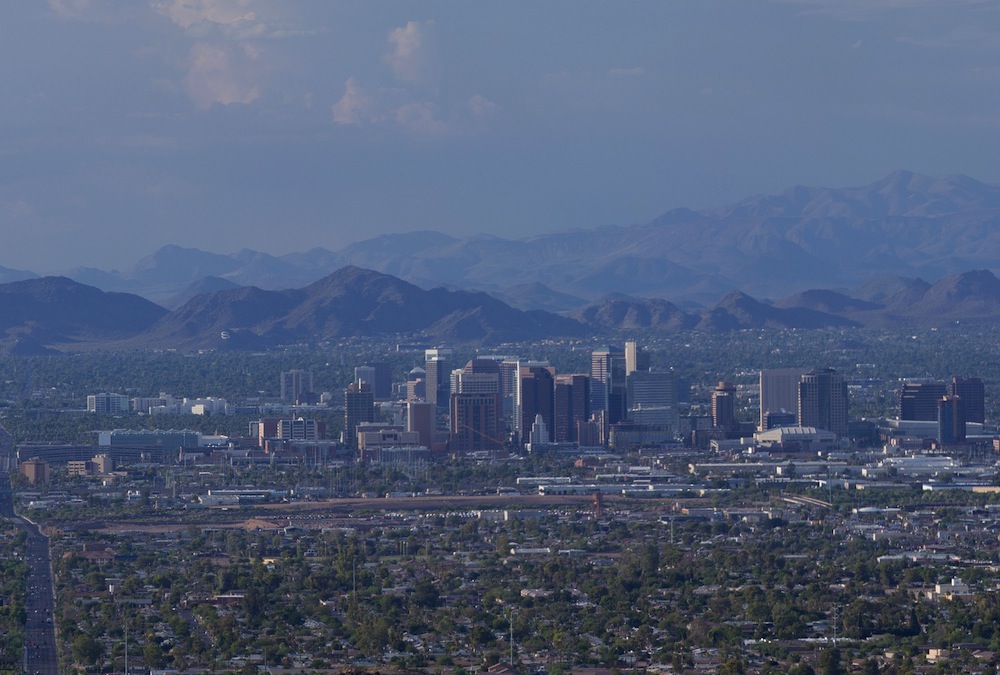 In places where the average temperature climbs to 105 degrees in July, it’s easy to understand the importance of air conditioning. Was it cooler and more comfortable living that drew people to the Southwest over the last 70 years? Or was it the cheap land? The friendly business climate? The growth is especially striking in cities like Phoenix, which more than doubled its population between 1940 and 1980. And it’s a trajectory that doesn’t appear to have slowed down: A list of the top 10 fastest growing states compiled from Census data last year includes five in the Southwest: Colorado, Utah, Texas, Nevada, and Arizona.

In advance of the Zócalo event, “Should Phoenix Exist?”, we asked a panel of experts: What is the single most important factor in the explosive growth of the Southwest over the last 70 years?

It would be easy to list the obvious reasons: weather, aqueducts, air conditioning. And all these things have played a role. But having grown up in the Northeast, I think the Southwest’s explosive growth is due in large part to something less obvious: clean government.

I used to joke as a kid that the small factory town where I grew up was run by the Mafia, the police department, and the Democratic Party—and there was really no difference between them. Even if they were not literally the same people, they were all cousins, and operated seamlessly to run the show. This system imposed a certain desirable order on the town, but it came at a cost. Things got done, but they weren’t always the right things; and it was hard to break in from the outside.

The Southwest has long been a land of weak mayors, strong city managers, and nonpartisan local elections. As a result, simply living life or running a business was a whole lot less complicated than in other places. You knew your city would be run pretty well no matter who was in charge, and if you owned a business, you knew the government wasn’t going to get in the way to try to shake you down. You didn’t need to know anybody’s uncle or nephew to get something done. The occasional corruption—as in the Los Angeles suburb of Bell—has generally been not a well-oiled system, but clumsy, one-off venality.

It’s changing now, of course. Even clean government can become sclerotic over time, Many cities in the Southwest can’t get things done anymore, and some folks even long for the days of graft, if only because it’s a system that produces results. I’m not sure I agree—but I do believe the clean government of the 20th century was the most important engine that powered the Southwest’s growth.

William Fulton is director of the Kinder Institute for Urban Research at Rice University in Houston. He was formerly mayor of Ventura, California, and planning director of San Diego. He is the author of The Reluctant Metropolis: The Politics of Urban Growth in Los Angeles.

Revisions to U.S. immigration policy, paired with the upsurge of a knowledge-based economy, have prompted rising immigration to the Southwest. Phoenix, in particular, has packaged itself as the “Silicon Desert” and created a growing demand for both highly skilled and low-wage workers. Enticed with economic opportunities not available in their home countries, immigrants have used either the popular channel of family reunification or employment-based preference visas to qualify for admission and legal permanent residence in the Southwest.

The groundbreaking 1965 Immigration and Nationality Act opened the door for the arrival of a diverse array of immigrants—particularly, India, China, and the Philippines. And the 1990 Immigration Act tripled the ceiling on employment-based permanent visas and created the H-1B visa program to admit temporary workers employed in “specialty occupations.” Given that many of the leading companies that employ H-1B workers have a major presence in Phoenix, it is no wonder that this metropolitan area has seen a dramatic growth in its immigrant population, especially since the 1990s.

Indeed, Phoenix has become a new gateway for incoming immigrants. While Los Angeles, New York City, Chicago, and Miami continue to be primary destinations for recent arrivals, Phoenix has become a key secondary destination. Just look at the numbers: while the foreign-born population only represented about 4 percent of the total metropolitan population in Phoenix in 1970, by 2010, the foreign-born population made up more than 15 percent.

While the record-breaking pace seen during the last two decades may not persist, Phoenix, and the Southwest more generally, will likely continue to attract high numbers of immigrants. This means tremendous changes to the social, political, and economic landscapes of this region, a topic worthy of a different discussion.

Emily Skop is founding director of the Global Intercultural Research Center and a professor of geography at the University of Colorado, Colorado Springs. She is the author of The Immigration and Settlement of Asian Indians in Phoenix, Arizona, 1965-2011: Ethnic Pride Vs. Racial Discrimination in the Suburbs.

This is an easy question that I can answer in two words: Roosevelt Dam. Before the dam, Phoenix suffered from an unreliable water supply and periodic flooding. After the dam, which was dedicated in 1911, the city was on a path to figuring out how to cope with a highly variable water supply in an arid environment. When he dedicated the dam, Teddy Roosevelt predicted great growth for the Salt River Valley: Someday, he said, 25,000 people will live here. He was only off by a couple powers of magnitude.

Roosevelt Dam led to the other dams on the Salt and Verde rivers, to the big dams on the Colorado, to our early agricultural economy, to the Central Arizona Project canal, and to the underground storage we have today. These watering systems made agriculture thrive. That grew an economy, and eventually subdivisions began to replace farming. Modern Phoenix was born.

This history is lost on most people from outside Phoenix, who see a place where it doesn’t rain as an improbable location for a city. In fact, it is a place to which you can easily deliver water—making it a probable and appropriate spot for a concentration of population.

Grady Gammage, Jr. is a part-time academic, a practicing lawyer, an author, a sometime real estate developer, and a former elected official.

Much of the growth of the Southwest occurred during the post-civil rights era from 1970 to the present, in the context of socioeconomic gains for minority populations, new laws to protect against housing discrimination, and greater racial tolerance. Consequently, neighborhoods in the Southwest are more racially integrated and equitable than those in other regions of the U.S.

For instance, compare the Phoenix region with the Philadelphia region. In 2010, about 75 percent of African-Americans and 60 percent of Latinos in Philadelphia would have to move to be completely integrated into the neighborhoods where whites live—and by completely integrated we mean having different racial and ethnic groups evenly distributed in an area. This is compared to only 40 percent and 50 percent of African-Americans and Latinos respectively in Phoenix. Other large Southwestern regions, like Riverside, California and Las Vegas, Nevada are similarly racially integrated.

Now, compare the city of Phoenix (74 percent built in the post-civil rights era) to the newer outlying suburbs (90 percent built in the post-civil rights era) that include Surprise, Glendale, Avondale, Chandler, Gilbert, Mesa, and Scottsdale. Neighborhoods in the outlying suburbs are more racially integrated (e.g. 60 percent of Latinos in the city of Phoenix would have to move to be integrated with whites compared to only 40 percent in the outlying suburbs). The newer outlying suburbs are also more racially equitable. The typical middle-income African-American and Latino household lives in a neighborhood with a poverty rate only one and four percentage points higher than the typical middle-income white household. In the city of Phoenix, their peers live in neighborhoods with poverty rates that are 7 and 11 percentage points higher than that of middle-income white households.

The fact that the Southwest’s rapid growth occurred after the civil rights era means that its neighborhoods better reflect its gains. Yet, they may need stronger community organization and social services to become places where people of color can thrive over time.

Deirdre Pfeiffer is an assistant professor in the School of Geographical Sciences and Urban Planning at Arizona State University.