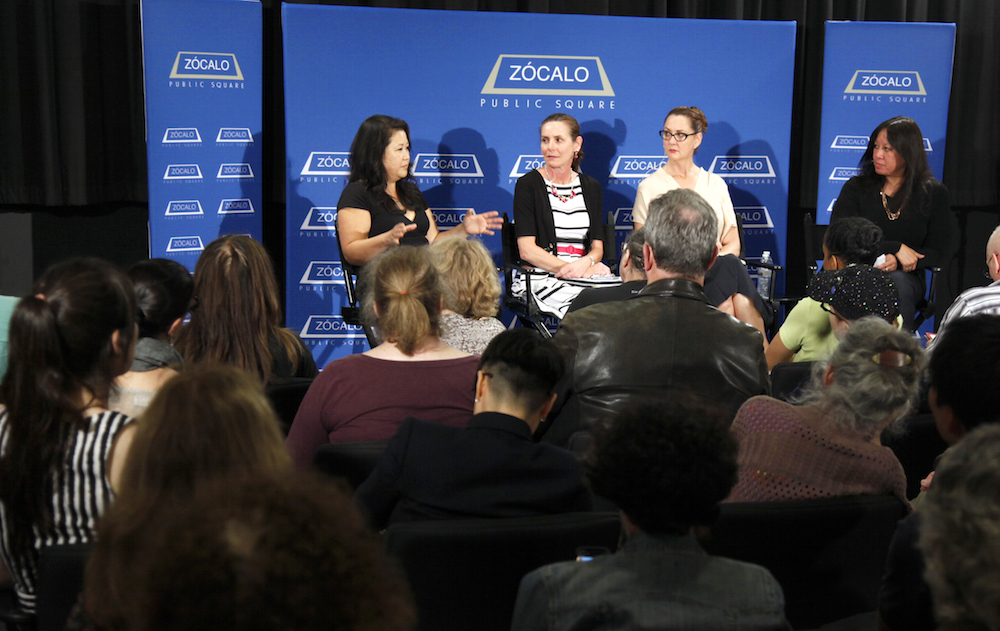 Los Angeles isn’t fantasizing when it calls itself America’s creative capital–the numbers back it up. Economist Kimberly Ritter-Martinez rattled them off at a panel sponsored by the City of Los Angeles Department of Cultural Affairs to discuss the business of creativity: 355,000 jobs are directly tied to the city’s creative industries, and 620,000 jobs are related in some way. More than 10 percent of Los Angeles county’s GDP comes from these careers.

But just because creativity is one of Los Angeles’ defining features doesn’t mean it doesn’t have to be defended. Ritter-Martinez, who was the principal contributor to a 2014 report on the city’s creative economy by Otis College of Art and Design, joined City of Los Angeles Department of Cultural affairs general manager Danielle Brazell and Maker City L.A. co-founder Sharon Ann Lee to discuss how to make the city a better place to make art in front of a full room at the Goethe Institut Los Angeles.

In the wake of the recession, Los Angeles, like cities around the country, has limited spending on the arts. And at the same time, increasingly, other cities are learning how to be creative and muscling in on L.A.’s turf: As the panel’s moderator, Los Angeles Times “Culture Monster” founding editor Lisa Fung, noted, only 22 out of 106 major studio films last year were actually filmed in L.A.

So, is Los Angeles losing its grip on innovation? How can it keep its reputation alive?

The grander challenge that the city faces, the panelists agreed, is a basic lack of understanding about how much value creativity can bring to communities. Part of the conversation focused on what has broadly come to be referred to as the “creative economy,” a catch-all phrase for professions that, Ritter-Martinez argued, encompasses all businesses and people that are involved in producing “creative content”—from visual and performing arts to furniture and toy manufacturers.

“Just because you’re not an artist doesn’t mean you can’t be creative in what you do,” she said. “Creativity permeates almost every aspect of our economy.” She cited the example of Wet, a maker of elaborate fountains that are conventionally classified as “fabricated metal products,” but are deeply artistic in design.

As a result, creativity can’t easily be dismissed as a non-essential part of a city’s economy—or general livelihood, the panelists agreed. The role creativity plays in ensuring a healthy, balanced life needs to be factored into any greater understanding of a city’s socio-economic function, Brazell added. “What type of life you have is not just dependent on your economic output,” she said.  “I would say [creativity] is part of our ROI,”or return on investment.

The big question for the panel, then, became what concrete steps the city could take to nurture creativity. As much as the panelists were willing to defend Los Angeles as the creative capital in the world, they also were very eager to address ways it could be better.

Lee co-founded Maker City LA with Ava Bromberg to provide low-cost workspaces and tools for artists, with the goal of giving creative-types what she considers one of the most essential things for creation: room for experimentation. “The physical environments that produce creativity have low levels of restrictions,” she explained. “If a creative environment tells you, ‘Don’t touch anything,’ we’re done here. You have to be free to punch a hole in the wall.”

She found that once the artists she knew left schools and tried to find space to create in the real world, they kept running into obstacles—they didn’t have studios of their own or the expensive equipment necessary to practice their crafts. That drove the creation of Maker City L.A..

Along with physical resources, their shared space encourages collaboration that is essential to inspiring new ideas, Lee said. “Creativity doesn’t really work in vertically integrated, specialized categories,” she argued. “What a lot of creative people need is community, where they can witness other creative people in their process.”

Brazell focused on funding, and the barriers to it. She admitted she was well aware of how difficult it was to apply for grants from her department. “It’s a 30-page application. You have to provide letters of recommendation. You have to be incredibly competent in English,” she said. “I have to tell you, it’s a flawed system.

She came with a long list of changes that could be made to improve the city’s built-in support for artists, including bolstering the community art programs for kids, expanding artist residency programs, and focusing on building grant programs for artists from nonprofits. “Nonprofits can do things that government can’t,” she said.

Even with these changes in place, though, Fung wondered what it would take to ensure creativity in Los Angeles not only is encouraged, but recognized. She asked the group, “How do you get the word out about what you do?”

Perhaps the most important—and frequently overlooked—factor is improving ways Los Angeles frames itself to the rest of the world as a leading creative city, Brazell said. “We have to think about new creative ways to market the city. We really need to think about how we collect, aggregate, and then distribute this important data and imagery,” she said.

She mentioned that festivals, specifically, could help. “We used to have a lot more festivals in the city,” she said. “This was a really inexpensive way for communities to apply for money and hold events that reflected their identity and diversity. There are great opportunities for these as the city rebuilds from the Great Recession.”

Ritter-Martinez, meanwhile, expanded on the importance of school programs and arts education for inspiring young people who wouldn’t otherwise be exposed to creative work. Bringing the arts to students, she argued, is essential for growing the next generation’s creative thinkers. “There’s so much emphasis right now on STEM [science, technology, engineering, and math education],” she said, “but not everybody’s mind goes in that direction. The arts are important in keeping students engaged who might otherwise drop out.”

She cited research that the arts keep kids in school longer, and keep them more civically engaged.

In the end, the panelists agreed, the city’s top priority needs to be keeping Los Angeles as Los Angeles as it can be.  “We have to try to dispel some of the things we’re telling ourselves” about disappearing creative jobs and funding and artists fleeing the city, she said. “Los Angeles is still a vibrant place.”

“Part of what makes Los Angeles a special environment is our historical and cultural support of any weird idea a person can think of,” Lee said. “That’s not nothing. That’s one of the most important qualities of this city. No matter how much money a city has, or people or buildings, you can’t just make that. That’s the magic in the air.” 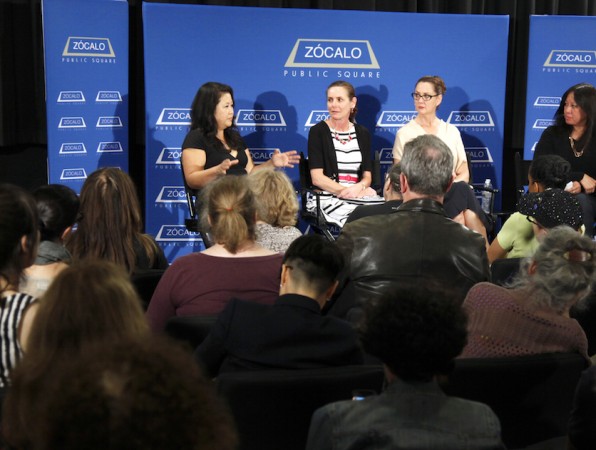 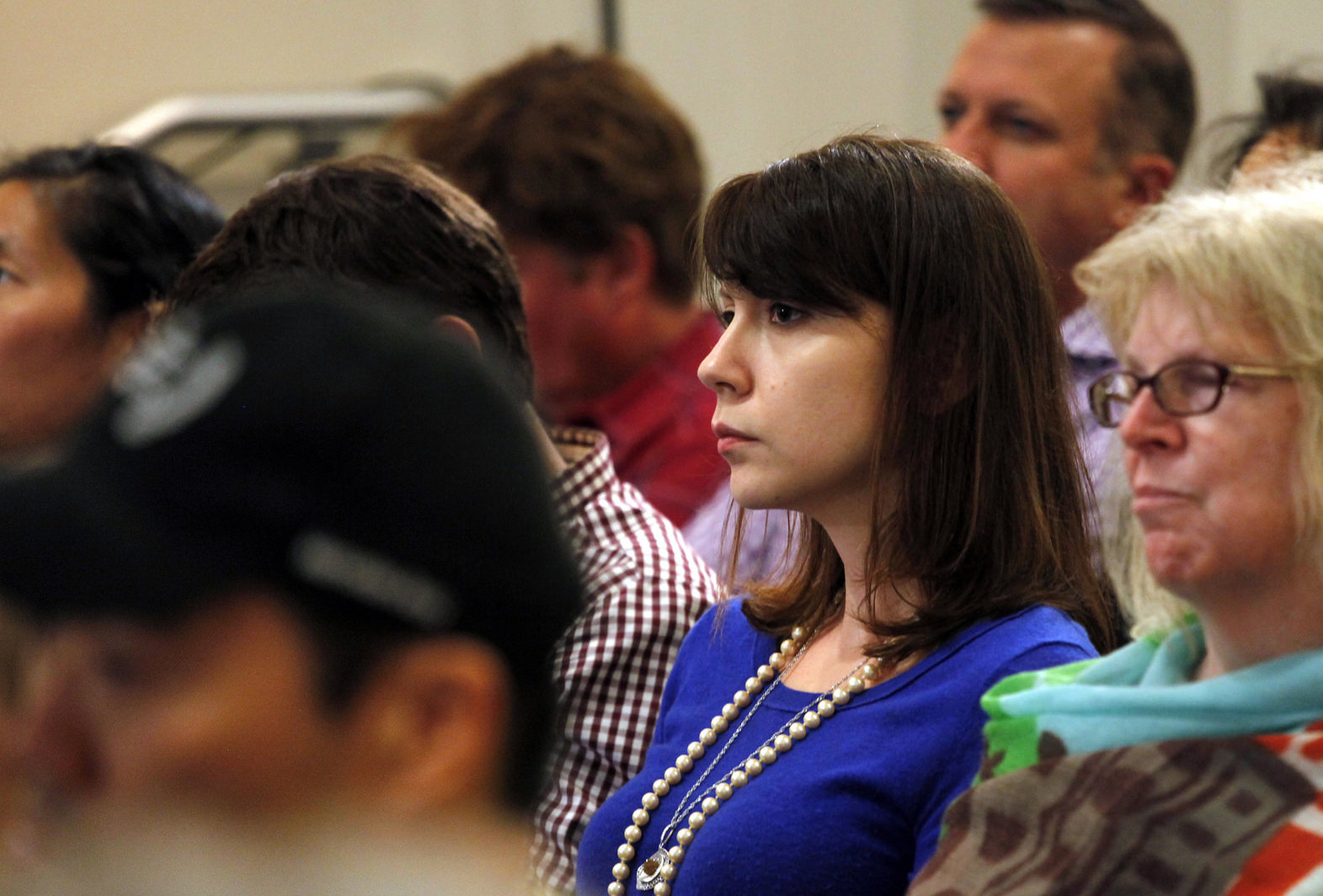 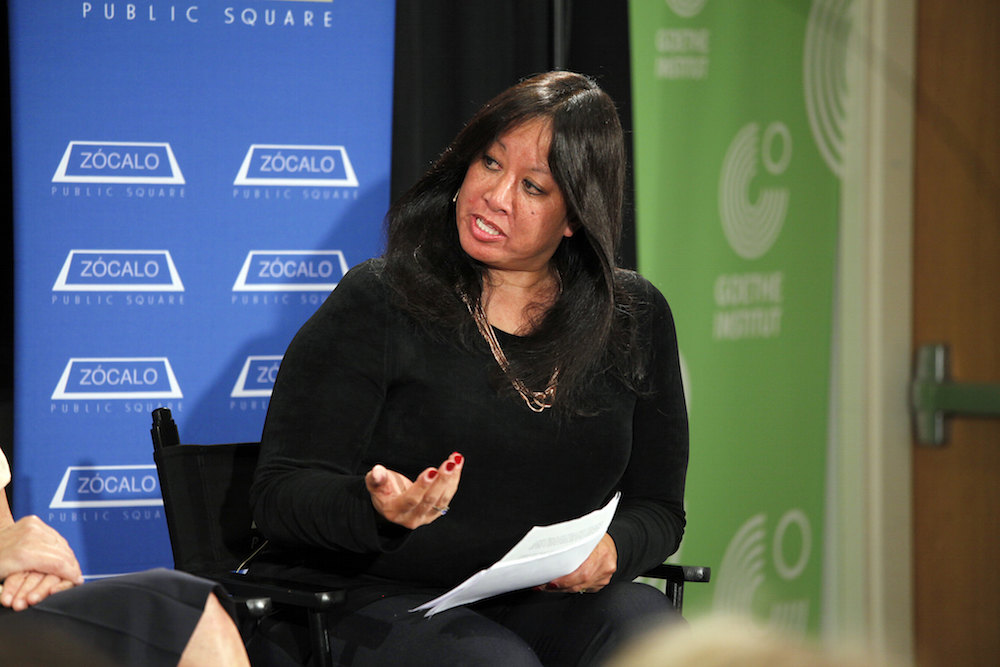 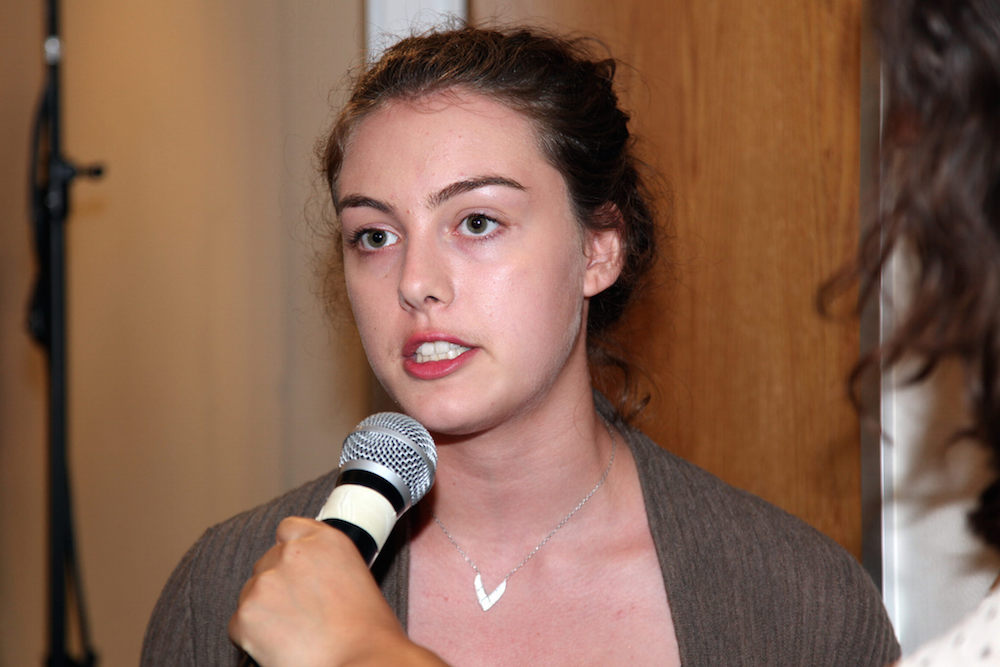 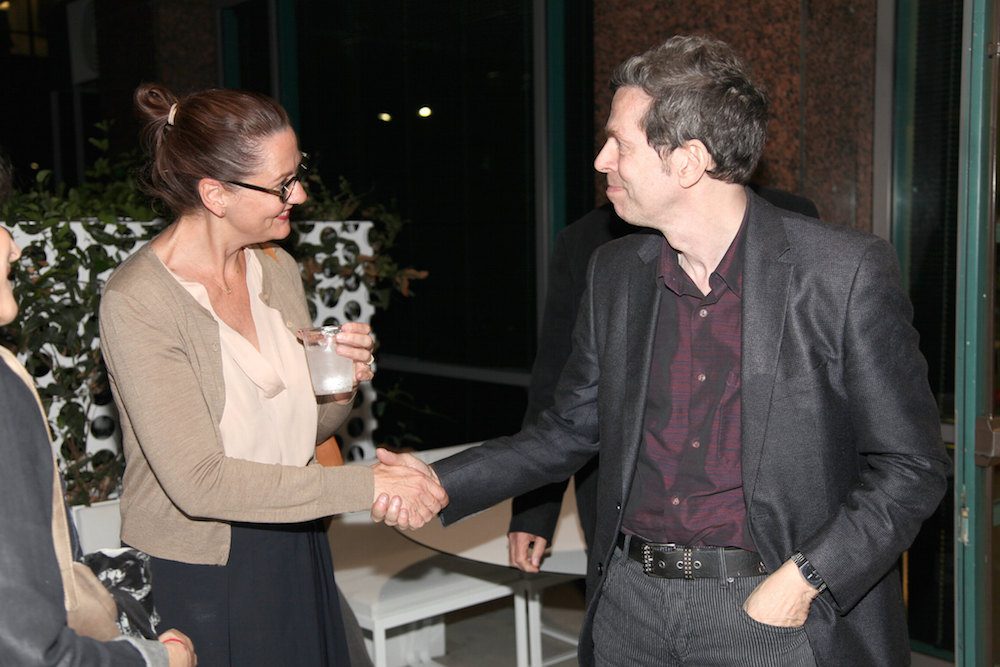 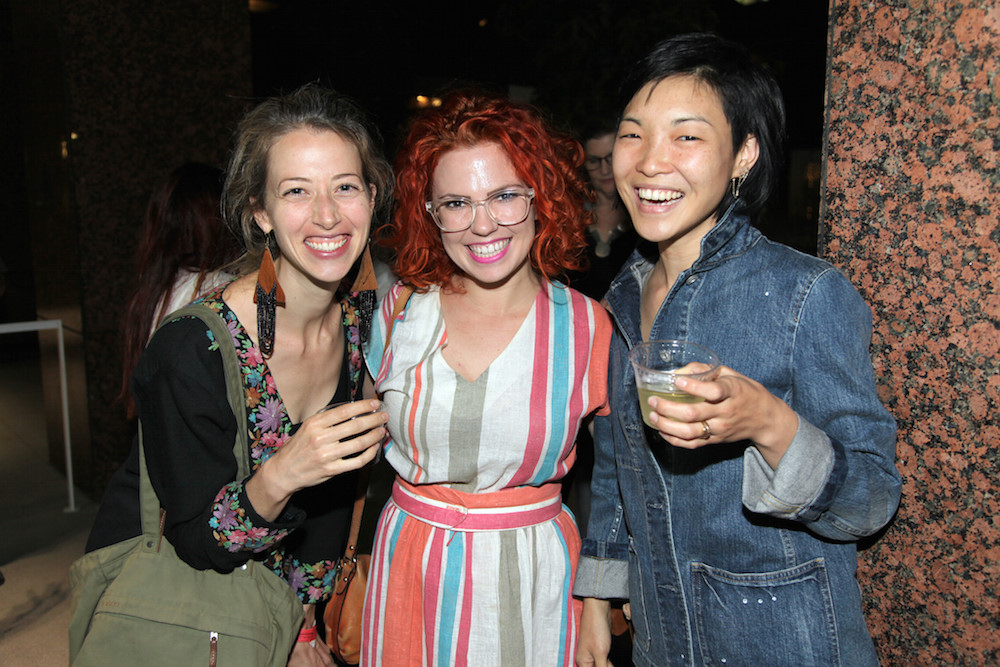