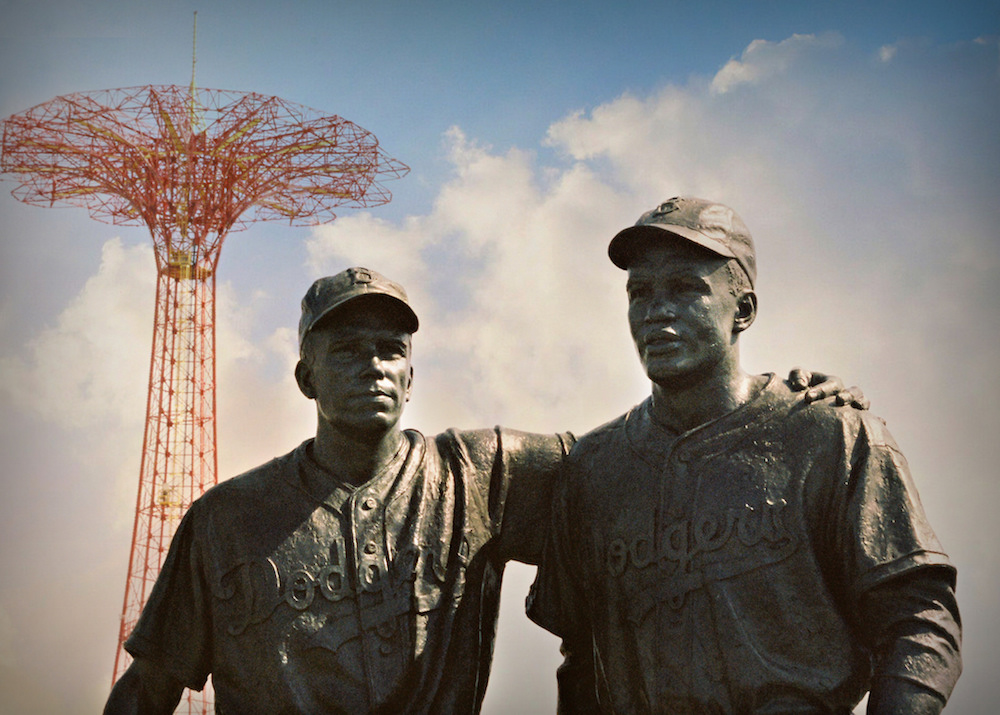 Jackie Robinson’s story brings together two American obsessions: sports and freedom. This is why we never tire of his tale. Yet in the way that the story has been handed down, it masks as much about our national identity as it illuminates.

The story of Robinson’s breakthrough often comes in the language and rhythms of baseball—the stuff of hits and runs, stolen bases and brushback pitches. He wrought havoc on the basepaths, demolished a racial barrier, and opened up our society.

The popular tale emphasizes Robinson’s moral courage, and rightly so. It has shaped him into a folk hero who belongs to the ages. But Robinson’s story becomes most instructive when we bring it down from the realm of the timeless epic, and connect it to the time and place in which it occurred.

The larger history—of racial struggle in Brooklyn and America after World War II—is often ugly and painful. When Robinson’s saga is placed in this context, it does not represent just a feel-good triumph for racial equality. It also reveals how the quest for freedom and democracy has coexisted with our country’s commitment to segregation and racism.

To be American is to know that we strive for freedom and at the same time we practice its opposite. We are capable of great leaps forward in terms of racial progress, including the election and re-election of the nation’s first black president. Yet our streets are not yet safe enough for unarmed black men to walk in peace. This remains our unresolved conflict: high-achieving African-Americans have been welcomed into specific realms of American life, yet such individual accomplishments have done nothing to alter the deeper patterns of black poverty, police brutality, and spatial segregation. The conflict between racial progress and racial inequality was as clear in Jackie Robinson’s day as in our own.

For many Brooklynites, an afternoon at Ebbets Field was the definition of bliss.

The aroma hit them first. The smell of bread rising from the Taystee factory, and cakes baking at the Ebingers plant, greeted the fans when they stepped out of the train station. As the throng pressed closer to the stadium, that scent mixed with roasted peanuts and hot dogs, sweat, and grass. Then came the sounds: the excited yells of children, the vendors hawking scorecards or newspapers. Many Brooklyn natives, like Joel Berger, recalled Ebbets Field as “a total sensory experience.” Nighttime made the stadium a palace, transfixing the eyes. Joe Flaherty remembered the decadent feel “of walking through Prospect Park to see a rare night game.” On a balmy evening in mid-summer, “all of a sudden the sky would be lit up,” transforming Flatbush into “the Emerald City, and as you got closer, you’d pick up your pace, and you’d give your tickets and go charging inside.” A Dodger game was the quintessential Brooklyn experience. In the age of Jackie Robinson, it became more than that. Ebbets Field was not only the borough’s cultural heart but the very seat of American democracy.

Robinson broke baseball’s color barrier in 1947, almost nine years before anyone had heard of Martin Luther King, Jr., or Rosa Parks. His achievement armed postwar Brooklynites with a distinctive claim to progress. Dodger fans had long detected something special in their baseball team and their borough; Robinson deepened that sense. He “added another dimension to being a Dodger fan,” reflected journalist and Brooklyn native Pete Hamill. “It was about right and wrong … we became the most American place in the country.” A moral element at once mingled with the magnificent smells and sounds and sights.

If white fans looked further down the street, they would have come to entirely different conclusions about the extent of racial progress. On the same Bedford Avenue that housed Ebbets Field, they would have witnessed the grim reality of housing segregation. Discriminatory federal policies had combined with block-busting realtors and fearful white homeowners to create racially homogeneous neighborhoods. Brooklyn’s African-Americans were corralled into a few select areas. Poor blacks had little choice but to pay high rents for dilapidated apartments. In neighborhoods like Crown Heights, Brownsville, and particularly Bedford-Stuyvesant, residents found basic services sorely lacking. Their garbage was collected only sporadically in Bedford-Stuyvesant, and in such areas, the city built few recreation centers, parks, or pools. In the very same years when Robinson played for the Dodgers—1947 to 1957—black ghettoes solidified.

This is what the rhetoric about Robinson and interracial democracy so brazenly missed. Even if Robinson’s heroics in the stadium pushed baseball fans to rethink their racial attitudes, even if Ebbets Field became a crucible of integration, very little of that feeling spilled over into the city—or country—at large.

Robinson’s own family experienced the inequities first-hand. Jackie Robinson learned that it was one thing to integrate the national pastime, and quite another to desegregate white towns and neighborhoods. The Robinsons ended up enjoying polyglot Brooklyn. But white homeowners had tried to prevent African-Americans from buying property in Flatbush. The Robinsons’ black landlord had endured such discrimination. Moreover, after the Dodgers integrated, some white fans had renounced their allegiance to the team. The borough was no interracial oasis, and even for the Robinsons it was not always welcoming.

In 1953, Jackie and Rachel Robinson began to search for a house in the suburbs of Fairfield County, Connecticut, and Westchester County, New York. It was a humiliating experience.

The Robinsons attempted to buy land in New Canaan but were rebuffed. Rachel called about one house in Greenwich and, after giving her name, the owners refused to show it. The couple settled for a property just across the state line in New York. Jackie recalled that in autumn 1953, “we finally found a piece of land in New York’s Westchester County that was just what we wanted.” The Robinsons offered the asking price, waited for weeks, and were told that the price would be raised by $5,000. This was standard practice in housing discrimination, a sure-fire way for whites in exclusive towns to claim that they had nothing against African Americans—it was just that blacks could not meet the asking price. This was purely the market at work, they would say, not racism. So the Robinsons promptly kicked in the extra $5,000. “There was another period of confused silence,” Jackie recalled. “At last, we were told that the land had been sold to somebody else. It was this way everywhere we went.” Suburban whites did not want an African-American for a neighbor, even if it was Jackie Robinson.

After the Bridgeport Herald printed an article about the Robinsons’ experience, the citizens of North Stamford, Connecticut, were moved to action. Ministers circulated non-discrimination petitions. The Robinsons finally bought a home on Cascade Road. Rachel Robinson recalled that moment: “I don’t know that I ever have felt closer to being a real American, closer to having lifted from my shoulders the nagging doubts and insecurities that are the heritage of the American Negro.” For her, the ability to buy a home was the true test of American freedom.

Their story serves as a sobering reminder about the meaning of racial progress in America. That progress isn’t really about whether we embrace famous black athletes or cultural icons, or even whether we elect an African-American as president. The true test of our progress is whether we can enact policies that combat racial inequality—to stop the rising tide of mass incarceration and police brutality—and whether we can eradicate racial inequality from our private realms, much closer to home, as well. Only then can we begin to build a country in which African-Americans are truly welcome in every neighborhood, every school, and on every street.