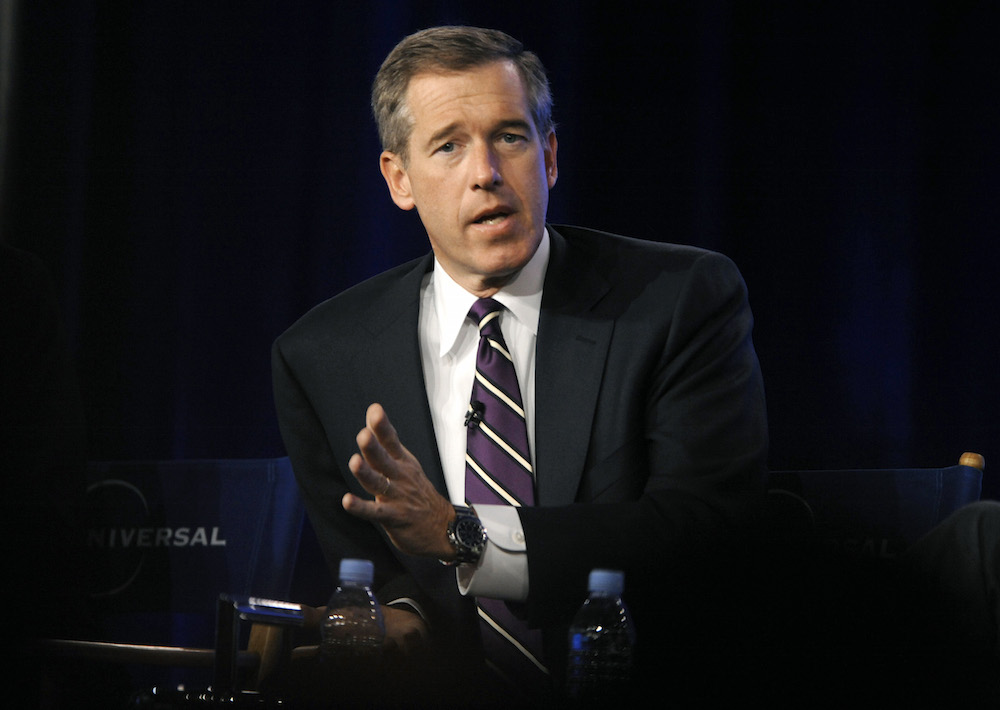 Critics and social media commentators have picked apart Matt Lauer’s nine-minute Today Show interview with disgraced news anchor Brian Williams, making much of its “mistakes were made,” less-than-apologetic tone. What has not gotten much attention, though, is what the interview—and NBC’s attempt to salvage a lesser career for Williams at NBC after he lied about being on a helicopter damaged by an rocket-propelled grenade and possibly several other stories—tell us about a double standard in broadcast news: Would they accept this standard of ethics and behavior when covering other businesses and government agencies?

To appreciate where TV news is today, we need to look back to where it was just a decade ago. In 2004, Dan Rather was the anchor of the CBS Evening News, at the time the second highest-rated national newscast, and a correspondent for 60 Minutes and its offshoot, 60 Minutes 2. On 60 Minutes 2, Rather reported a story that then-President George W. Bush, back in 1972, shirked his Air National Guard obligations. Documents used to prove the claim were suspect and CBS News convened an outside investigation led by Louis D. Boccardi, the retired president of the Associated Press, and Dick Thornburgh, former U.S. attorney general and Pennsylvania governor. The scathing report of the panel’s in-depth probe was made public and led to the dismissal of Rather’s 60 Minutes producer and Rather’s resignation from the network.

Fast forward to 2013, where the same CBS program aired a seriously flawed report on another important matter—the Benghazi incident. Correspondent Lara Logan relied largely on a self-aggrandizing, fictionalized account by security contractor Dylan Davies, whose book was about to be released by a CBS-owned publishing firm. In place of an outside investigation of the reporting, CBS News assigned the investigation to Al Ortiz, the division’s director of standards and practices. Ortiz’s inquiry led to a public report and a short suspension for Logan and her producer. The Davies book was scrapped. There were penalties, but they were less than those imposed on Rather and his colleagues. Additionally, the in-house probe lacked the credibility of the outside panel headed by the likes of a former U.S. attorney general and a top-flight journalism executive.

Both Rathergate—as it inevitably came to be called—and Logan’s Benghazi report were the result of slipshod journalism. One involved a sitting president and ran shortly before the election—so a sinister political motive might have been attached to the piece. The other involved a highly politicized tragedy and buttressed one side’s preferred scenario of the event. Williams’ offense is dissimilar in that it did not involve shoddy journalism and failure to vet sources; it was all about self-aggrandizement.

Williams, anchor and managing editor of the NBC Nightly News, delivered at least one and perhaps several fabulist reports on that program. And in his role as NBC’s ambassador to late-night talk shows, he seriously exaggerated his role in several major news stories. Williams was suspended for six months and, of course, an internal investigation was launched.

Last week, NBC News announced Williams had “made a number of inaccurate statements about his own role and experiences covering events in the field” and that Williams would be demoted to a created-for-him anchor job at MSNBC. The network did not release the internal report, as CBS had done in the Logan incident. The next day NBC aired a nine-minute interview with Williams on Today. Even though Today is best known for live interviews, this one was recorded over two days and edited, giving NBC News maximum control over what the audience saw. Looking at the finished piece, I spotted three obvious edits and two possible edits. There may be additional edits that were more skillfully executed.

I appreciate that Lauer did ask some probing questions, but it seemed obvious to me that there was a prohibition on the words “lie,” “lied,” and “liar,” since they never passed the lips of either Lauer or Williams in the nine minutes that aired. And to a question that begged an answer starting with the word “yes” or “no”—Did you know your on-air tall tale about being on a helicopter that took enemy fire in Iraq was not true?—Williams’ reply echoed John Kerry’s fateful response about his changing votes on support of the Iraq War: “I told the story correctly for years before I told it incorrectly.” If Lauer followed up and tried to hold Williams’ feet to the fire, that exchange was edited out.

The whole package—an internal investigation with findings that were not made public, a controlled-environment “apology,” and a punishment that appears to be preparation for a career do-over—was an exercise in hypocrisy. It was the sort of whitewash journalists rail against when done by government agencies (police conducting internal investigations of officer misconduct) or corporations (General Motors’ legal department seeking out those responsible for the decades-long cover-up of a fatal ignition switch defect).

But at least NBC did something. In February, after Mother Jones and others showed the extent to which Bill O’Reilly lied about his adventures covering the Falklands War in 1982, his current employer, Fox News, did nada. Since I happened to be at CBS News at the time O’Reilly was reporting for that network on the Falklands, I know he was not in a “war zone”—none of our correspondents ever got on the islands. And he was not at a supposedly deadly riot in Buenos Aires—my friend, retired CBS News correspondent Eric Jon Engberg, who was in Buenos Aires at the time, would know.

Fox News didn’t even do an internal investigation. Apparently, the fact that O’Reilly’s fictions weren’t broadcast on their airwaves was enough reason to ignore them.

Maybe network TV managers calculated that the public’s attention span and memory are short these days, and people are so accustomed to exaggeration, misrepresentation, and outright falsehood that they will forgive Williams and O’Reilly.

Has the system gotten overly forgiving of its stars? Certainly, O’Reilly is a huge contributor to Fox News’ bottom line. And, since he is more opinionator than he is reporter, the calculus may be that decades old facts don’t matter as much as current bloviations. He is Fox News’ Bank of America—too big to fail.

F. Scott Fitzgerald was completely wrong when he wrote: “There are no second acts in American lives.” Williams was a star and could once again be one. Fortunately for him, NBC News had a venue where he can ply his trade and prove his worthiness. Not coincidentally, he may also be able to increase MSNBC’s dismal ratings.

Williams may, in fact, be the vanguard of a programming change at the cable channel. Having lost the opinion-mongering war to Fox, maybe NBC is readying MSNBC to become more of a hard news reporting channel. For that to work, Williams will have to overcome public skepticism of big institutions: big government, big business, big media. Thus far, NBC’s handling of the Williams case justifies and nourishes that skepticism. But maybe Brian Williams can rise to the occasion and dampen that skepticism a little. Let’s hope that his performance contains more genuine repentance than his Today interview.