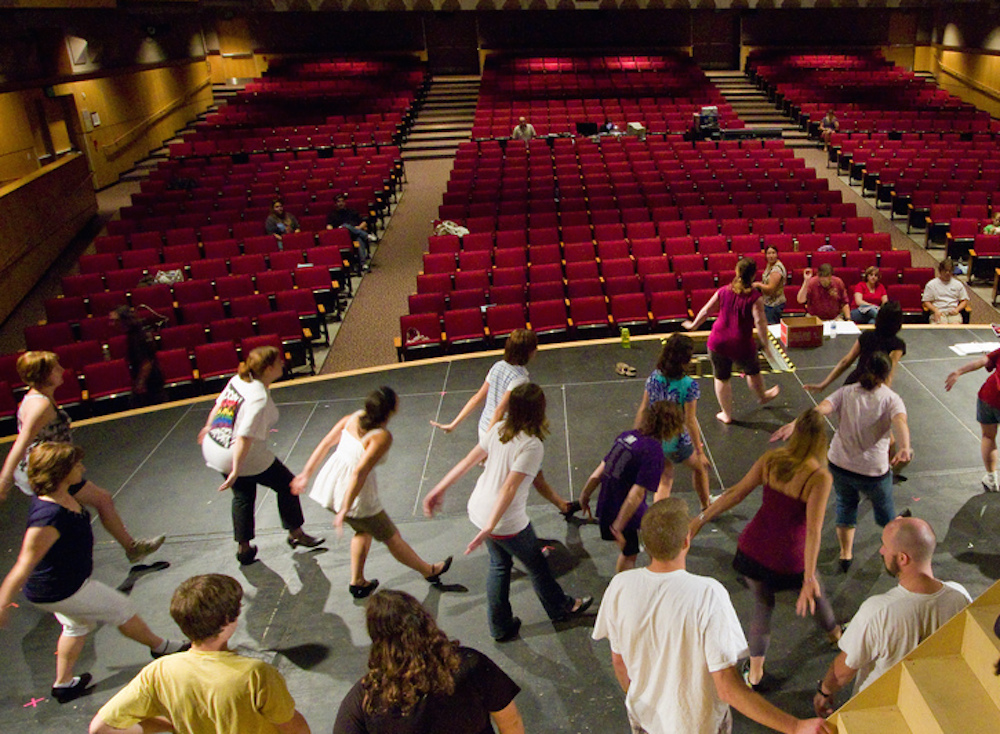 Be open to change

Understand why people attend live performances in the first place

The way Americans engage with the performing arts is rapidly changing. We have instant access to millions of songs on the phones we carry with us everywhere. We can stream theater and dance shows whenever we want from the comfort of our living rooms.

The upshot of this constant access is that more people than ever can experience great performances; it requires just a click, not an expensive ticket. But the downside is that live shows are losing their audiences. For small-scale, community-based performers, this is especially problematic. Often short on resources and lacking broad exposure, local artists and venues depend on people filling up seats to stay afloat.

Technology can either connect us to or disconnect us from the present, depending on the relationship we have with the devices we hold in our hands. As we post, tweet, and yelp for those who can’t be present, are we missing the moment we’re in by viewing it through our phones?

Prior to film and digital technology, we exclusively witnessed performance in real time. There were no recordings, no broadcasts—but now, we can watch the Metropolitan Opera “Live in HD” anywhere in the country. A definite upside of technology is this ability to obliterate geographic and socioeconomic boundaries, making performance accessible to unprecedented numbers of people. The downside is that when you strip away the audience from the work of art, the art’s “aura” is lost.

German cultural critic Walter Benjamin defined this aura in his 1936 essay “The Work of Art in the Age of Mechanical Reproduction” as having a unique presence in time and space, and a certain authenticity, which is lost with technological reproduction. The reproduction enables a democratization of the art form and allows its foray into the political sphere. He also spoke presciently of contemplation versus distraction—a common concern about the effects of technology, both then and now.

There is no denying that the digital age has shaped our interactions into a collective experience made up of multiple points of view. But, as a 40-something,who has managed to navigate the digital divide without too much trepidation, I feel that we still need to find a way to engage audiences and their devices on a deeper level, or we risk diluting the experience that performance provides, which, while ephemeral, leaves a lasting impression.

Danielle Giudici Wallis is the program coordinator for Arts Connection, the Arts Council of San Bernardino County. She is also a visual artist, with work currently on view at the Riverside Art Museum through October 2, 2015.

At the D.C. Commission on the Arts and Humanities, a key component of our mission is to provide programs and activities that encourage diverse artistic expression, so that all of our residents and visitors can experience the rich culture of our city. Community-based performing arts are a way to accomplish that mission.

The performing arts can create an immediate and communal experience that’s quite different than digital media alone. We live in an age where it is common to stream our entertainment on our computers, and our social interactions take the form of words typed on a tiny screen. To ensure the future of audiences for live performances, it is vital that we expose our young people to the arts early. Community-based performing arts are an important vehicle for this exposure.

Washington, D.C., hosts an impressive array of festivals throughout the year that include the performing arts. Programs such as the D.C. Jazz Festival, the National Cherry Blossom Festival, and several theater festivals all offer free or low-cost admission and are held in a variety of locations around the city.

Families’ attendance at such festivals exposes young people to live performers creating art just a few feet away from them, not on a screen. They experience communality at its finest—an experience that makes the performing arts one of the highest forms of human interaction. These opportunities will hopefully help to ensure audiences in the future.

Community-based performing arts can provide a much-needed outlet of engagement for people in the digital age, and can be a great way to capture and express the culture and vitality of our cities and our nation.

Lisa Richards Toney is the interim executive director of Washington, D.C.’s Commission on the Arts and Humanities.

Well, I was a young man back in the 1960s
But hey, you young people
Well, I just do not know
And I can’t even understand you
When you try to talk slow

Those prescient lyrics from the song “Way Back in the 1960s,” recorded in 1967 by The Incredible String Band, reminds me of that popular ’60s word: relevance.

The word definitely had a special meaning back then. Anything worth caring about was related to the issues of foremost concern to my generation at the time—peace, racial equality, the environment, and freedom of expression.

Somehow, in the intervening years, use of the word became scarce. And somehow, over the same time period, much of the art that was created also seemed less relevant. I’m not saying this art wasn’t good, or that it didn’t break new ground, or even that it wasn’t important—only that it consciously distanced itself from what many found relevant.

Recently, I’ve heard the word “relevant” start to come up again in conversation, and I’ve seen it more in print. I’m also seeing artists and those who present art place a renewed emphasis on being relevant. Not everyone defines “relevant” identically, but if one of the main purposes of art is to cast meaning upon our existence, it sure makes a greater impact when it connects to the concerns and interests of the community.

And since that is an ever-moving target, it makes staying relevant more than just an opportunity. For community-based performing arts, it’s a matter of survival.

Richard Stein is executive director of Arts Orange County, the arts council for Orange County, California, and is a longtime theater producer and director.

Be open to change

Community-based performing art, particularly theater, is alive in communities all over the world. An estimated 7,000 community theaters serve, and are sustained by, Americans across the country and by members of our Armed Services overseas. Humans have a need to express themselves, and to come together to share experiences and a sense of community. When there is no theater, we create it.

As a result, theater and other performing arts have not been replaced by radio, TV, movies, the Internet, or streaming entertainment in the digital age. What is vital about community-based performing arts is that it is live, it is shared, and it is in the moment. Performers can feel the pulse and adapt to meet the needs of their audience.

In many cases, new technologies enhance performances, rather than ruin them. Live theater, for instance, embraces digital technology to enrich production values and add a new dimension of creativity and wonder to arts experiences. Performing arts groups use digital communications (and commerce) to reach more people, with less expense, than ever before. And audiences become more involved as they text, tweet, and post about their arts adventures.

Not all groups will be successful in changing alongside their community, but that is not a digital phenomenon. Change is not a creation of the digital age. Change is forever with us. Those who can change with the digital age will remain vital now and in the future.

Julie Crawford is executive director of the American Association of Community Theatre, a nonprofit association for community-based theaters, theater artists, and supporters.

Understand why people attend live performances in the first place

It is a daunting task for community arts to remain vital in the digital age. Digital tools offer audiences an almost infinite supply of art in a huge variety of forums, easily obtained from the comfort of home at the viewer’s convenience. Understanding why people come to live arts events in the current digital age is important.

In a 2012 National Endowment for the Arts “participation in the arts” study, surveyed respondents indicated that socializing, learning new things, experiencing high-quality art, and supporting the community were the top four reasons for attending live performances. Equally important is what prevented people from attending these events: Time, cost, and access to venues were mentioned as top reasons, but not digital migration. The survey demonstrated that live arts participation is indeed down.

To compensate, community arts agencies must embrace new strategies to meet the needs and wishes of their potential audiences while holding onto their current participants. I believe community engagement—reaching out to people, getting them involved, and actively participating in their communities—is the most important strategy for the arts to focus on. Engagement programs can address critical local issues, meet the needs of underserved audiences, and even focus on creating economic vitality for the locality in which they operate.

Focusing on community engagement means the artistic offerings that result might be different from what has been presented before, but the risk is worth the reward of emerging as a revitalized and locally relevant organization. The role of community arts in society is as important now as it has ever been, even more so in the digital age. Those working in the arts have the tools and ingenuity to ensure that community arts remain vibrant and vital, while serving the needs of 21st-century audiences.

Stephen Butler is the executive director of CNY Arts, Inc., a regional arts council based in Syracuse, New York. He also is an adjunct professor at Le Moyne College’s Graduate Arts Administration program.

The digital age provides performing arts organizations with exciting ways to reach audiences and to support the visual artists, musicians, curators, arts educators, and students who share their talents with us.

My organization, Center for the Arts Eagle Rock, uses digital media to showcase the stories of our eclectic Northeast Los Angeles arts community and to generate excitement for our live events, workshops, and education programs. As the novelist Grace Paley once observed, “The personal is the universal.” The digital age gives us the opportunity to virtually invite the public into our space. It helps us expand the boundaries of what it means to be a community arts organization, and allows us to reach more people with meaningful arts programming.

There is strength when we combine our social media network with the networks of the artists and performers we support, too. To generate excitement for the Eagle Rock Music Festival, we share our creative resources and work collaboratively with our musical performers to reach new audiences. And it’s fun.

There are so many ways to connect directly with your audience. Create video sneak peeks, document and share your idiosyncratic stories, post rehearsal snippets, share behind-the-scenes, tease a song from an upcoming band, interview an audience member, share the work of an emerging artist.

When you make the digital connection with your audience, the arts community flourishes. Dream it. Shoot it. Share it. Repeat.

Melinda Ann Farrell is the executive director of Center for the Arts Eagle Rock (CFAER), which provides multidisciplinary arts programming and free afterschool arts enrichment classes to the communities of Northeast Los Angeles and beyond.