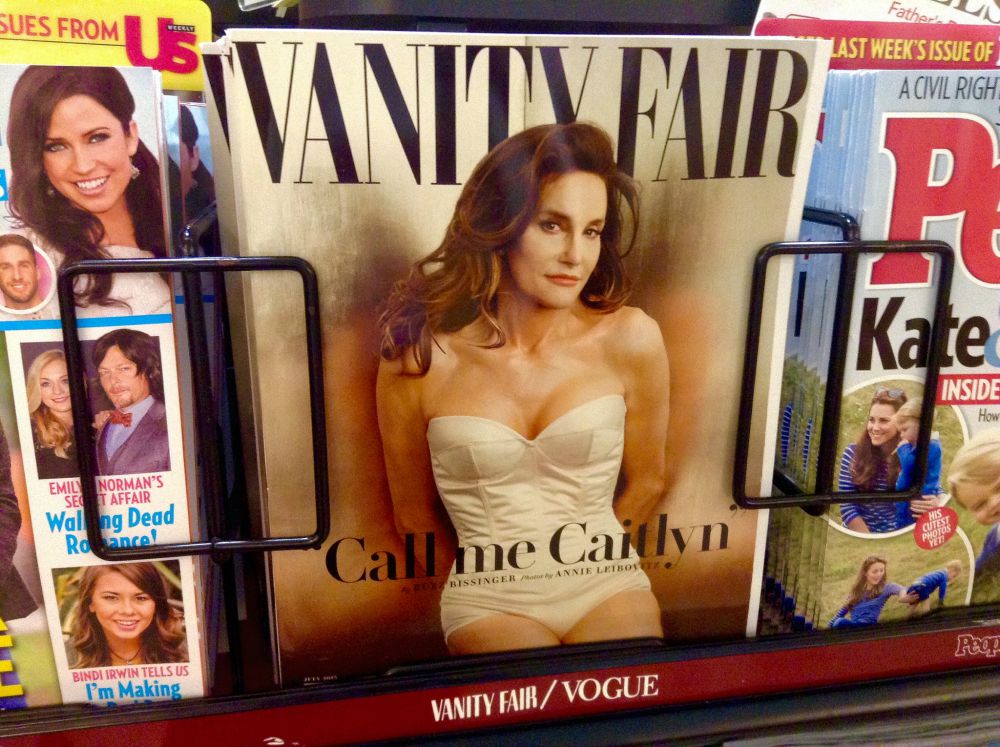 Four years ago, when I first started presenting to the world as a woman, I met my friend Jamie for lunch in West L.A. As soon as we sat down, some children sitting at the table next to ours said they spotted two men who were “dressed weird.”

I knew they didn’t mean any harm, but my heart sank, since I was a newly out transgender woman who was trying her best to blend into society. Jamie noticed my discomfort and saw how I tightened up. She knew that I was wondering what else I could do to look better. “What had I done wrong?” I thought to myself. “Did I not wear enough makeup? Was my voice the tell? What did they pick up that gave me away?”

“Don’t worry, Natalie, so many transgender women get read in front of children,” she said. “They just have the knack to read us out and spot us. It must be their purity or innocence or something.” She was trying to console me.

There was a huge flurry of discussion and applause when Caitlyn Jenner announced her new name and the start of a new life with a glamorous spread on the cover of Vanity Fair. But not all of us get a spread in Vanity Fair and a prize-winning journalist to explain who we are. For most of us, it is hard to explain ourselves. The daily awkward moments are difficult to deal with, if only because they keep coming even after the “big reveal.” The most important change a transgender woman can make is to drop the protective armor she has been carrying around her whole life.

The first thing we are taught about gender is what we can’t be. Often, while I was growing up, I heard, “No, boys don’t wear dresses. No, boys can’t wear makeup. No, boys play with different toys than girls.” I knew my heart was feminine at the age of four, but society repeatedly told me that I couldn’t show the world the person I felt myself to be. If I did, I was going to get beat up—even though I was growing up in liberal Southern California. But after 30 years of modulating myself for those around me, I needed to start the transition to the person I’d always felt was inside, or walk through the rest of my life feeling dead.

To be transgender is to know deeply that the traditional gender roles assigned by the body parts you’re born with don’t fit, and that you have to move beyond what society typically thinks of as a “man” or a “woman.” To transition to the gender that we feel is inside of us, many transgender people choose to get surgery or take hormones, but many others do not. It’s more about living in the world as a particular gender. Medical history is irrelevant—and a private matter, as it is for all Americans.

The most important change a transgender woman can make is to drop the protective armor she has been carrying around her whole life.

For me, transitioning meant I had to peel off the years of socialization as a man, no longer hiding in transgender and gay bars, and inviting all 30 family members from both sides over for a meeting, where my parents went through the trouble of translating what I said into Chinese for those family members that didn’t comprehend English.

It meant walking into the living room for everyone to see me, and answering questions for four hours from people who were genuinely concerned about me and the struggles I had faced in solitude for three decades. It meant feeling like my old skin was ripped off as I walked in the world raw and tender, even though I had ample support from those who loved me the most. It meant accepting that, at any given moment, people could express disdain towards me—the very same disdain that I had feared so much when I was younger and prompted me to hide my trans nature for so long. It made changing wardrobes and applying makeup seem so easy.

Shortly after I began transitioning, a transgender friend and I were trying on outfits—she a cute halter-top, and I a strapless dress with a floral print—in the fitting room of Forever 21. We overheard an employee say, “Oh my God! Did you see those two? What are they trying to be? Did you see how ridiculous they looked?” He was giggling hysterically with another coworker.

For the majority of transgender women I know, no matter how attractive and passable she is, her trans-identity will reveal itself at some point. But it’s not even having our history out there that is the scariest thing. I recognize that some people, no matter what, are going to want to make me feel uncomfortable because I’m different from them. But the scary parts for me are the moments I am labeled merely as a “man in a dress,” treated as less than human, or erased as a freak.

Two years after that unpleasant rendezvous with Jamie, I was ecstatic to start my first job while presenting as a woman. Everyone at work—I’m an engineer—would meet the me that I had hidden for over three decades.

But accompanying my excitement came the fear that I would be read out as a transgender woman. So I did what most inexperienced transgender women do in their first few years of transition: I stiffened my spine and kept a heavy curtain up to conceal my past. I wanted desperately to box up my history and leave it in the dumpster.

So even though I identified as more of a “girl next door” and felt most comfortable wearing jeans and a simple top, I constantly tried to keep myself polished and camera-ready with Marciano dresses and Michael Kors heels. Not only was I exhausted by trying to hold up this 50-ton shield of defensive armor, I was also distant.

I quickly realized my armor came with a huge cost. My friendships lacked emotional weight. To hide that I was a transgender woman, I felt I had to edit out snippets of my life, such as the fact that my ex-fiancé was a beautiful Russian woman, or my last boyfriend was an aspiring professional dancer turned electrical engineer. I couldn’t go into details about my high school days or describe the queer activist rally I had attended over the weekend. And when asked by a coworker about the name of my former rock band in San Francisco, I lied because I was fearful he would discover through Google that it was a transgender band.

I had spent so much energy to come out as Natalie—only to find myself choosing to convince everyone that I was born female at birth with the childhood of a girl rather than owning my transgender identity. So I asked myself, “What is more important, a seamless concealment of my past, or more depth in my relationships with those women whom I see as friends? Did I really make this transition to merely walk into another closet?”

Then came an opportunity to change all that. I went shopping one Friday with one of the gals with whom I was closest to at work. After terrorizing our bank accounts for over four hours and swapping fashion tips, we went to an Indian restaurant for dinner. It was there that I told her about my transgender history and my journey into embracing my womanhood. When I finished, I was so nervous, I couldn’t look at her.

Then I felt my hands being taken into hers. As I turned my head upwards to make eye contact, she thanked me for telling her, and told me she was grateful for the opportunity to deepen our friendship.

It’s now been four years since I transitioned and I am so much more comfortable with my transgender history that I can approach it as a “So what?” when I’m interacting with other people in public. It is the prose of my everyday life—not the poetry—that has made the difference.

All the work I put in to drop my defensiveness was affirmed recently. During a friendly gathering for lunch between two families, a 3-year-old named Stella observed me with curiosity as I played with my 4-year-old niece, Sasha. When Sasha felt shy about being around new people, she buried her head into my dress.

Stella blurted out, “Are you Sasha’s mom?” All the adults laughed at Stella’s innocent inquiry, but I felt as if Natalie had finally arrived. It wasn’t about putting on an outfit and makeup or getting my genitals reconfigured, but about the work I put in to stop being self-conscious and play with these kids in the way that let my feminine heart shine.