Standing under the multi-colored glass ceiling in the former Mexicoach bus terminal, Tijuana native Miguel Buenrostro asked a small group of visitors, “What does it feel like to destroy something beautiful?” A chilling question. One that will be answered for him July 31.

I was visiting Tijuana on a tour organized by the architecture firm Gensler. As the owner of an agency, I was interested to see how creatives—architects and designers—were shaping their city after a long difficult period. Buenrostro greeted us at our third stop that day.

He, along with co-founders Marco Soto and Miguel Marshall, created Tijuana’s first co-working office, HUBSTN (Hubstation), in this bus terminal a little over a year ago. Like many businesses on Avenida Revolución, the Mexicoach terminal had fallen into disrepair when the tourists stopped coming after September 11; it was totally abandoned during the drug war. The terminal was slated for demolition when the co-founders approached the owner of the property with an idea: turn the architecturally and culturally iconic building into a new symbol of Tijuana’s progress—a collaborative work space for entrepreneurs, artists, and businesses.

For Miguel, this was a perfect location for the idea. The iconic sign—the Mexicoach logo in red, with all caps—could be seen high above the street. At ground level, a multi-color, glass-covered elevator greeted visitors. The terminal rose three stories, joining a curved ceiling made from the same glass. It felt like a Wes Anderson set—kitschy, hand-built, and exuberant. It was full of attitude and history. 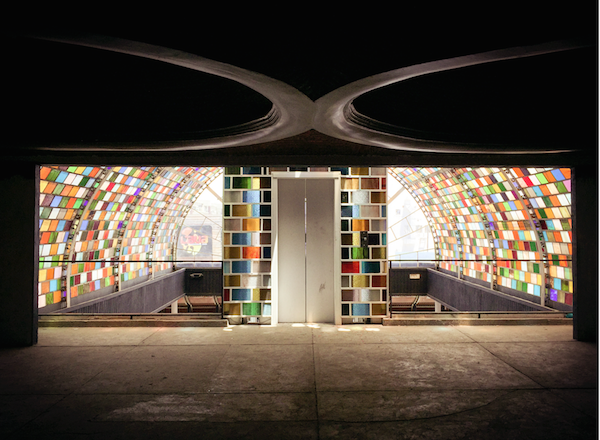 The top floor of HUBSTN looking out over Avenida Revolución

The building dates from the 1930s. It was originally a shopping arcade called Pasaje Contreras. In 1983, it was remodeled into a terminal, and Mexicoach set up shop there. From the 70s into the 2000s, Mexicoaches traveled to and from the U.S. on the hour. Just outside the terminal doors, shuttles picked up arriving passengers to take them to doctors and dentists who charged less than their counterparts in the States. Tourists returning to the States gathered here after they’d received whatever medicine they’d come for.

When the tourists stopped coming, the government didn’t step in. So Buenrostro and his two partners decided they’d take it back for the betterment of the city of Tijuana itself. They would create their own value there.

The architect Alphonso Medina from T38studio got involved. He came up with a plan for the space. Furniture was designed to be modular and flexible. Color cues from the glass, vibrant greens and hints of red, were incorporated into the decor. Stair railings were topped with fluffy green astroturf. It had the air of a Silicon Valley or Silicon Beach start-up.

Before long, companies began to move into the space: a web design agency, a small venture capital firm, a human resources agency. The terminal became home to Groupon’s office in Tijuana. Teams of entrepreneurs, who would have typically been working from their homes or cafes across the city, came to the HUBSTN to collaborate, network, and grow. Uber held meetings there. CNN reported on the place. The New York Times mentioned it when it wrote about the “Rebirth of Tijuana.”

HUBSTN became a model for how a project can change the perception of a place. Indeed, the partners’ plan to create new value from the old building worked too well. Just one year into what was supposed to be a five-year plan, the owner of the terminal building received an offer—and it was sold.

This brings the story to July 31, when the HUBSTN startup space in Tijuana is slated to be demolished. The new owners of the terminal, who also own Las Pulgas Bar (famous for five-peso beer), have no need for the old structure. Speculation is that a mega bar will be built on the site, and there’s no doubt it will create value for the family who owns it. 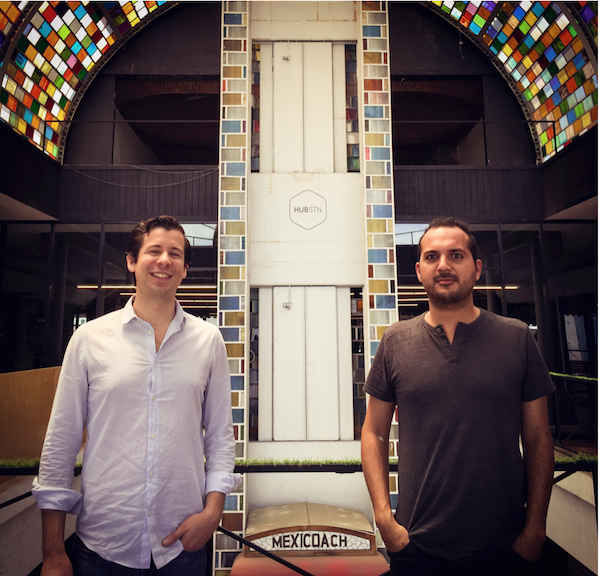 As Marco and Miguel talked to the small group of architects taking a last look at the building, it was clear they held conflicting emotions about the end of HUBSTN. Their idealism had been dealt a serious blow. Money won. Business won. Progress won. The building, the history, and the dream didn’t.

But the lessons from the HUBSTN experiment had value that could be transferred to other places, and other revitalization projects. Being from Los Angeles, I’ve had a front row seat for the rip-and-replace method of development. And I couldn’t help but think of our own neglected spaces—The Piggyback Yards, or the L.A. River—and how important the revitalization efforts are. Once they are gone, they don’t come back. “We were idealistic. We didn’t think about the business aspect of the project as much. But we’ve learned a lot, and we’ve been approached to do what we did here to help revitalize other spaces in other cities,” Buenrostro said. Since he’s a filmmaker, he is also planning on documenting the destruction of the space. His film will represent the answer to his opening question: What does it feel like to destroy something beautiful?

They’ll take something else with them from this experience—the glass ceiling tiles. They’ll begin dismantling the structure by hand next week. So that even after the Mexicoach terminal is a memory, the tiles will be a reminder that, once a glass ceiling falls, nothing is ever the same again.