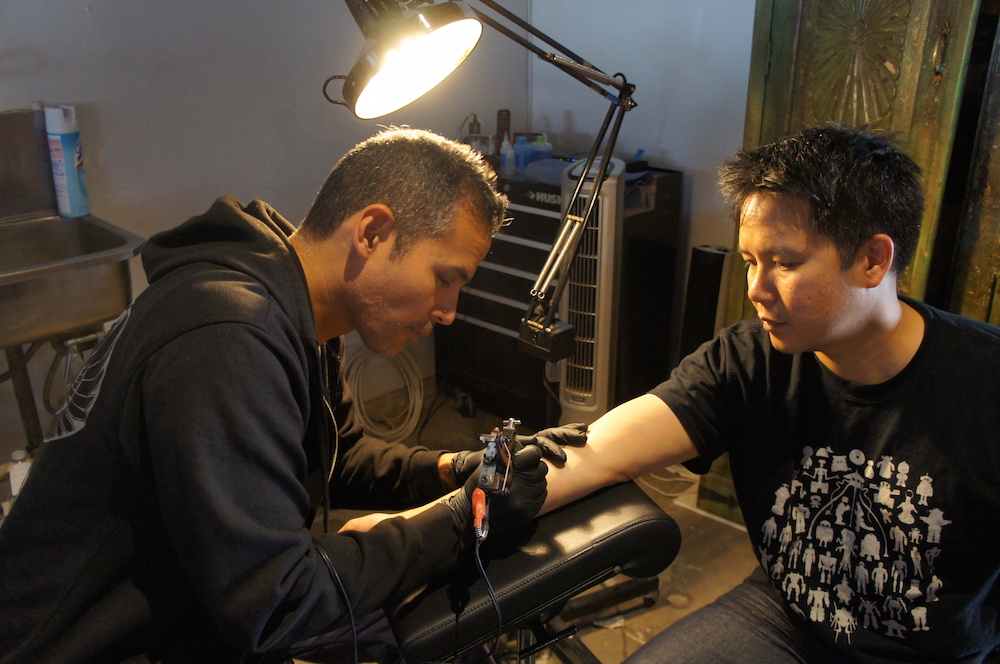 "Civic pride tattoos are not rare, but in Long Beach, like most everything else here, they have a rich past," writes Tran, pictured above getting a tattoo. Photo courtesy of Ky-Phong Tran.

Pressed up against the Pacific Ocean and the county line, my hometown of Long Beach is the last city in Los Angeles.

Since its founding in 1897, Long Beach has long been a sanctuary city for dreamers and cast-offs: young Iowans seeking warmth; oilmen drilling for wealth; navy sailors heading out for adventures; blacks escaping Southern racism; gays and lesbians building a safe haven; and refugees fleeing war in Latin America and Southeast Asia.

Unlike other Los Angeles cities that consume their history in an ouroboros-like cycle of drywall redevelopment and garish Mediterranean villas, Long Beach doesn’t just remember its past—it survives because of it.

We remember through traditional means, like our 50-year old Long Beach Historical Society and the iconic Acres of Books, once the largest used bookstore in California. We also remember through our architecture (the downtown Pike rollercoaster bridge), our murals (dozens bombed across town), and of course, our music (Snoop Dogg and Sublime).

However, we also remember in a more corporeal way. The walls of the Long Beach Clothing Company store in the Bixby Knolls neighborhood are lined with hundreds of photographs of people tattooed with “Long Beach” or “LB” on their bodies. I particularly love the ones of local iron tattooed onto local flesh: the underappreciated Vincent Thomas Bridge spanning a man’s chest and the British ocean liner Queen Mary moored to a torso.

Civic pride tattoos are not rare, but in Long Beach, like most everything else here, they have a rich past. A few blocks away from the bustling Aquarium of the Pacific and surrounded by modern apartment buildings is a small corner shop located at 22 Chestnut Place: Outer Limits Tattoo. Before that, it was Bert Grimm’s World Famous Tattoo where, since 1927, thousands of sailors from the now-shuttered Long Beach Naval Shipyard were tattooed. Black-and-white photographs of tattooed sailors, restored original artwork, and a backroom museum of tattoo guns and needles make it obvious that renowned tattoo artist and current owner Kari Barba deeply respects the locale’s history. Together, the shops are the longest-running tattoo parlor in the United States.

“Tattoos are proof of our existence,” said Shay Bredimus, a gallery-represented visual artist and painter who also has tattooed at Outer Limits for six years. As we spoke, he worked on a gothic tattoo of the skull-like hill Golgotha, the site of Christ’s crucifixion, on a man’s inner arm. “In the modern age, they are one of our last rites of passage, an agreed-upon blood ritual.”

Unknown to most, Long Beach sits atop the United States’ third largest domestic oil field. And it is sinking. Every day, thousands of gallons of oil are pumped from beneath the city. To replace those gaps in the ground, engineers pump water back into the ground, preventing the city from collapsing onto itself.

Amidst so much turmoil and impermanence, I understand that we have to store our memories on the most intimate place of all: our bodies.

My city hasn’t always been so lucky. More often, it has collapsed, sometimes to be rebuilt again, sometimes not. During the riots in 1992, army trucks rumbled down the streets and my neighborhood burned. In the “hot summer” of 1998, 11 were killed in a vicious interracial gang war. But sometimes the change is good and peaceable. In 2014, the city elected its first Latino and openly gay mayor.

Amidst so much turmoil and impermanence, I understand that we have to store our memories on the most intimate of place of all: our bodies. We remember with our tattoos, our history inked permanently into our skin. As my tattoo artist Aleks Figueroa of Dream Jungle Tattoo said, “Tattoos make the world less impermanent.”

A few hours after my visit to Outer Limits, as I wandered around Signal Hill, which has one of the best views in Southern California, I crossed paths with three Cambodian-American young men. They had a mix of street art and Khmer iconography tattooed on their arms, stomachs, backs, necks, and even their heads. I could not take my eyes off them. One had an image of a stone Buddha head etched into his neck. Another’s entire left arm was a tribute to Kobe Bryant.

I introduced myself with the universal city greeting, an upward head nod. The leader of the group, it turned out, was Chanthy Sok, a.k.a. CS, a local rapper who is leading a Long Beach rap renaissance called the Cambo Movement. He invited me to his North Hollywood recording studio and then later said this about his tattoos, the temples of Angkor Wat and “Made in Cambodia” inked across his stomach.

“Growing up in Long Beach, we used to be despised for being Cambodian. I used to ask myself, ‘Why can’t I be something else?’” he told me. But while serving almost 10 years in prison, “I studied up about my people. We weren’t just the victims of genocide and the Killing Fields. We weren’t barbarians and jungle people. It took a strong civilization to build Angkor Wat. My tattoo is about redemption. After all those years of hating myself, I owed it to myself.”

CS’s new tattoo also covers up a tattoo of his old gang affiliation; it’s both facade and symbol of rebirth.

My family moved to North Long Beach in 1979. We were refugees from the Vietnam War. In addition to the traditional trials and tribulations of having immigrant-refugee parents (poverty, cultural differences, language difficulties), my family faced additional trying circumstances. For most of my life, both my parents had been disabled by strokes, my dad when I was just a teen and my mom in 2005, a month before I turned 30. In some way or another, I had been responsible for their care for almost three decades. My mom passed away in 2009 and my dad followed four years later. They are both buried in Long Beach, a few blocks from where we replanted our roots.

My two tattoos memorialize both of them. My mom’s signature is inked onto the inside of my left forearm in a graceful calligraphy that resembles Arabic writing. It’s to honor my life as a writer and all the times my mom read to me—in English—after an exhausting day of work. My dad’s paratrooper wings from his service in the South Vietnamese military adorn my right inner forearm. His body was broken for so many years that I wanted to remember him young and strong, jumping ably from helicopters and airplanes.

When we fled Vietnam, my mom was already six months pregnant, physically lugging me across time zones and borders. In his new American life my dad, a former schoolteacher, sold furniture and worked at a construction company. My mom toiled as an office clerk and manicurist. It was not glamorous work, but they did what they had to provide food and shelter. As they carried me, I now carry them.

My tattoos also link my parents to their kin. When my first son was born, I brought him into the world with my mom’s name there by his side. In a few weeks my second son will be born, and I will welcome him into the world with arms bearing both his grandparents’ memories. When I teach my sons how to shoot a basketball or read a book to them, they will see those same tattoos and ask them about them. Then I will tell them about their grandparents.