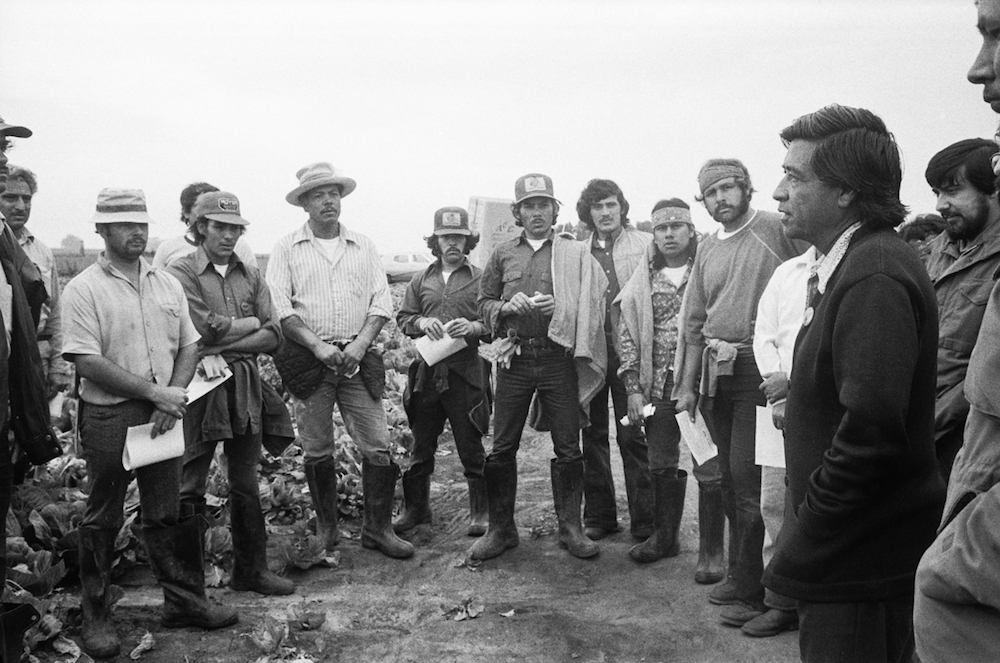 In the new hit musical Hamilton, a frustrated Aaron Burr sings an anthem for all those who are shut out, denied a chance to shape their own destiny: “I want to be in the room where it happens.”

For a brief time decades ago in the Salinas Valley, farmworkers were in the room where it happened. For those workers, just as for the “young, scrappy, and hungry” Founding Fathers who sing their story in the Broadway musical, being in the room was the path to power.

The sledgehammer that broke down the door for the overwhelmingly Mexican and Mexican-American farmworkers in Salinas was the United Farm Workers. Cesar Chavez and the union he founded sparked a movement that spread fast and far beyond the fields. That spark, the chispa, threatened to upend not only the economic equilibrium, but the social structure and fabric of the valley.

In 1970, roughly one-third of Salinas’s 60,000 residents were Hispanic; in the smaller agricultural cities farther south in the valley, the percentage was as high as 75. A Spanish surname meant you were half as likely to have graduated from high school and far more likely to live in poverty. Overt racism in housing, jobs, and education was pervasive.

The laborers who tended and harvested vegetables in the Salad Bowl of the World were accustomed to work in teams and more militant than their counterparts in other agricultural areas of California. But until the UFW came along, their only recourse to protest unjust treatment was to withhold labor—and lose their jobs. No health, safety, or labor laws protected farmworkers. They could be fired at will. Then in the summer of 1970, the growers outsmarted themselves. They signed secret sweetheart contracts with the Teamsters Union to preempt Chavez. In response, 5,000 farmworkers joined Chavez’s union and walked out of the fields, shutting down the lettuce industry in the biggest strike of its kind.

That huelga was just the start. The strike and the threat of a boycott forced several large growers to sign contracts with the UFW, and a dozen more followed suit a few years later. Farmworkers experienced the power of collective action. Veteran organizers taught basic tactics, and fledgling worker-leaders improvised new ones. When a supervisor at a union ranch clung to the old ways and tried to exercise power unilaterally, the tortuga (turtle) showed up: Workers harvested so slowly that production dropped by 80 percent. Lettuce wilted in the fields, until the workers’ demands were met. Chavez loved it. He called them “liberated ranches.”

The rise of the UFW in the Salinas Valley ushered in an exhilarating and frightening time, depending on your point of view. In my research on the union, there is one tape I have played over and over to help me viscerally absorb the drama of the high-stakes clash. On the evening of Dec. 6, 1970, Ethel Kennedy went to visit Chavez in the Salinas jail, where he was being held in contempt of court for refusing to call off a lettuce boycott. Robert Kennedy’s widow prayed at a makeshift shrine on the back of a pickup truck, then navigated a tense gauntlet on her short walk to the jail. On one side of the street, leading citizens of Salinas waved signs and chanted “Reds go home” and “Ethel go home.” On the other side, thousands of farmworkers prayed and sang, emboldened and inspired.

I have listened to veterans of the Salinas fields recount the conditions they endured before the union came along—the back-breaking work, the drugs many took just to keep going, the rage at their inability to control the most basic aspects of their work life, the utter loss of dignity.

And then, they were in the room where it happened. Farmworkers sat across the table from their bosses, negotiating a contract. By 1979, the union had negotiated a basic hourly wage of $5.25, and the fastest lettuce cutters could earn $20 an hour. Contracts included a provision that a farmworker at each ranch served as a full-time paid union representative. 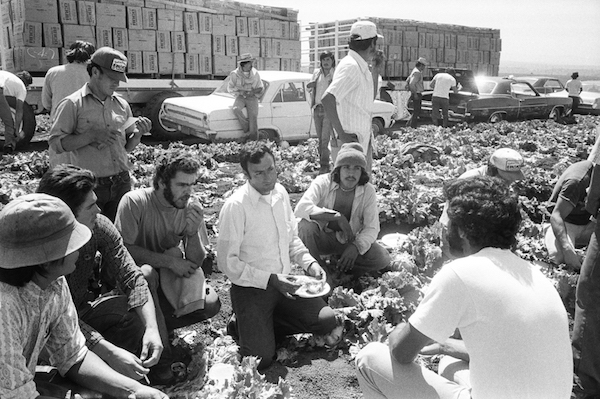 One Salinas grower recalled how the workers’ elected ranch committee would find reasons to call meetings with management almost every day. After a full day in the fields, workers rushed home, showered and changed, and returned to the office to negotiate. The grower shook his head, grimacing at the memory. Every night, they wanted to talk, he told me in amazement. For hours!

They wanted to talk every night because they had been waiting a long time, and now they were finally in the room where it happened. Chava Bustamante was a teenager when he left Mexico in 1967 and went to work in the lettuce fields, hating every minute. He joined the union in the 1970 strike. A few years later, he sat at the negotiating table and watched the brilliant, brash UFW attorney outsmart the once-invincible grower. Chava wrote a poem dedicated to the lawyer. It ended with this verse:

Poor fools! Those who think that power comes from money
Without contemplating
That real power
That which is real and lasting
That is the one which is given through justice

The power through justice spread, perhaps most significantly into the schools. Schools that farmworkers saw as the hope for their children. Schools that still too often treated Mexican kids as if they didn’t really need an education because they were just going to work in the fields anyway.

Juanita Miranda understood those issues in 1973 when she arrived in Salinas to teach at Sherwood Elementary School, where 80 percent of the more than 800 students were Mexican-American. She was a farmworker kid, too; one of 11 in her family, the first to go to college. At Sherwood, she found no curriculum, scant materials, and only a handful of teachers who spoke Spanish.

Chava’s older brother Mario was head of the parents committee at Sherwood. He learned that the district lost money if students were absent, and that was all Mario needed to know. Parents staged a huelga, pulling their kids out of school for a week and marching in picket lines outside the building. The district hired more bilingual teachers. “We had no one to support us except the parents,” Miranda recalled. “They were the ones who did it. They were our stronghold.”

But after little more than a decade, all that power dissipated. By the mid-1980s, the UFW had lost its strength in the Salinas Valley, largely from self-inflicted wounds. Each year brought new and younger workers, and the lessons of the 1970s faded further away. In 2013, farmworkers picketed the UFW’s Salinas office to protest the firing of a popular union organizer. The UFW called the police and tried to get a court injunction to bar the pickets. Just as the growers used to do. 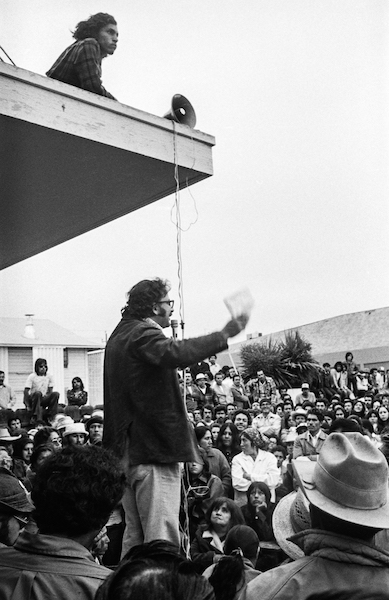 UFW organizer Marshall Ganz addresses farmworkers at a meeting in the yard of the Salinas union office, 1975

Juanita Miranda taught at several schools and ended her career back at Sherwood. When she returned in 2000, she said, things were worse than when she had first arrived. She found low expectations, ineffective remedial programs, high dropout rates, and an absence of hope. Parents wanted to help their children succeed just as badly as they had decades earlier, but they didn’t know how.

Today, the generation of farmworkers that grew up with a sense of its own power has passed into retirement. In Salinas, the average age is 29. Homicide is the second-leading cause of death in East Salinas, the most dense and dangerous area of the city. Last year, more than half the students in the Salinas elementary school district were English learners, 80 percent qualified for free lunch, and one-third reported being homeless at some point in the past year.

No organization or individual has come along to instill in young people, on a broad scale, a sense of their own power or teach them the resilience to make ¡Sí se puede! more than just a slogan. The jail where Chavez stayed 45 years ago is on the National Register of Historic Places and there are proposals to turn it into a museum; for now the shuttered building stands as a fading testament to another time.

Sooner or later, a new spark will come along. As Aaron Burr counsels Alexander Hamilton in the Lin-Manuel Miranda musical: “Wait for it. Wait for it.”