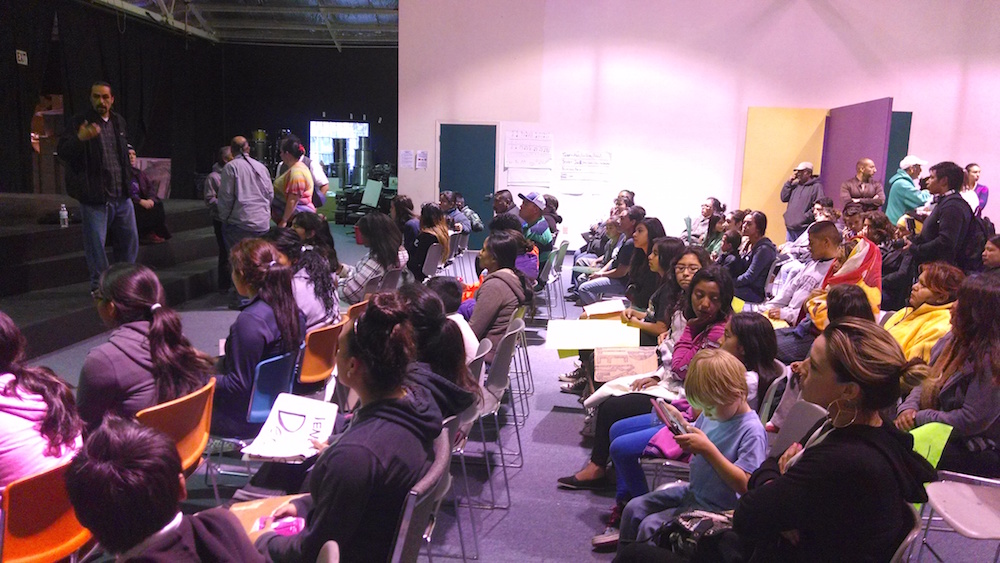 On May 20, 2014, two Salinas police officers shot and killed 44-year-old Carlos Mejia on Del Monte Avenue in the city’s east side. Within hours, a cell phone video was posted to YouTube that shows Mejia walking down the sidewalk and turning toward the police. You hear the sound of the bullet, the screams of the crowd, and see Mejia fall.

Mejia was the third person shot by police in three months in 2014—after Angel Ruiz (March 20) and Osman Hernandez (May 9).

The night after Mejia was shot, a candlelight vigil grew into a protest with more than 100 young people filling the busy intersection where Mejia was shot. Someone had parked a white SUV in the intersection and people were standing on top of it launching bottle rockets while others stood nearby carrying signs and shouting “¡Queremos justicia!” (We want justice!).

I was there with a few other people who had just left a community meeting a few blocks away. The mood was very tense, and the video of the shooting, viewed over and over, had given residents a focus for anger and frustration that had been growing for years. As organizers trying to keep the peace, our deepest question was: Are we co-opting a legitimate protest and making the protestors’ anger illegitimate? Are we, in a sense, selling out?

Violent protests, no matter how righteous their motivation, won’t create the concrete change East Salinas needs. If we continued on the path towards confrontation, we’d simply reinforce the fact that the police had all the power and the citizens had none.

And it was exactly this feeling of being disempowered that had led the youth to occupy the intersection. For us, the main question was how could we do something that had never been done before—reach out to the police and community to create a true, working relationship to build some lasting change?

It’s hard to organize anywhere, but particularly in East Salinas. Salinas became a city in 1874, but the East Side remained unincorporated until 1963, and its representation, its infrastructure, and its opportunities still lag far behind. The 101 divides the city, and if you drive from one side to the other you can easily see the poor roads and crowded housing of East Salinas, but what you can’t see is even more significant. Power—who has it, and who doesn’t—hangs over everything here. It’s not just the elephant in the room; it’s the elephant in our heads. If we could work with the community to feel empowered and to hold the police accountable in a conversation, THAT would be revolutionary.

In late May, I was part of a group of organizers that held meetings every other week to create a space for community members to talk about their feelings about the officer-involved shootings. One of these meetings, organized by Motivating Individual Leadership for Public Advancement, the United Farm Workers Foundation, and East Salinas Building Healthy Communities, brought in more than 100 people. People told us they didn’t trust the police. They said they wanted a voice, and told us how they wanted to organize—sin violencia, y con respeto (without violence and with respect).

One night, a reporter from the local TV news attended a meeting. At the time, I was an outreach coordinator for the United Farm Workers Foundation, so the reporter asked me for an interview—and if I was “for” or “against” the police. In that moment, I realized that the “us vs. them” narrative is part of the problem. It’s one thing to work on changing that narrative through community organizing, but another thing to explain it in a news five-second clip. On-camera, I said something about how it was easy for the media to perpetuate the “us vs. them” narrative because it’s filled with the drama and conflict that sells news.

I understand where the narrative comes from. I moved to Salinas four years ago for a job with the United Farm Workers, and the city immediately reminded me of the community where I grew up. Like Salinas, cities in the East Coachella Valley are full of people who have a bad relationship with law enforcement. One of my most vivid childhood memories from growing up in East Coachella Valley in the early 1990s is of the Border Patrol taking my aunts and uncles away to be deported; we didn’t know that we could deny them entry to our house, so inside they went. My family members were hiding, scared, my baby brother was crying. I did not understand why they were taking our family away. Experiences like that leave people with a deep fear and distrust of authorities that is hard to change.

As awful as they were, the officer-involved shootings in East Salinas provided an opportunity for us to pressure the city to listen and for the community to voice their concerns and fears. We began working to prepare for a meeting between community members and staff members from the city, including the police department.

It was very important to us, as organizers, that the community didn’t come in unprepared. We did not want a situation where people were yelling at the police, shutting conversations down, and leaving the community angrier.

I come from a traditional organizing background and worked with organizers with backgrounds in theater and traditional healing. On the evening before the big meeting in November, Motivating Individual Leadership for Public Advancement, which uses teachings from across indigenous Mexico to promote a sense of culture and belonging, organized a healing circle. Community members were asked to name what makes them feel most oppressed. Some people said that, until talking with the police, they thought the police would never respect them. At first I was skeptical about the healing, but as people went around the circle articulating their feelings I saw a shift as they began to realize the power of their own humanity. This healing was necessary—it made the difference for community members that could not be in front of an officer without a rage building inside of them so strong that the only thing they could do was shut down.

The next day, the big meeting began—structured as a weeklong training. For the first two days, about 50 community members, mostly from nonprofits and community-based groups, met to talk about how to discuss racism in a constructive way without attempting to “identify the racist in the room.” Then about 50 members of the city staff—including the city manager—met separately for two days to look at how the city government’s policies might be informed, intentionally or unintentionally, by bias. On the last day, the two groups got together and made a plan to continue the discussion.

After all that talking, we’ve seen results. While there was a fourth officer-involved shooting in 2014, there have been none in 2015. In June, Police Chief Kelly McMillan dismantled the Monterey County Joint Gang Task Force, and transferred officers back to patrol and investigation bureaus. We hope this means the department is moving toward a strategy of prevention and early intervention. And that police officers will work to create relationships with community members so it doesn’t seem like they only show up to arrest people.

Other positive changes have occurred. Last year, Salinas voters approved an annual sales tax increase that could generate $20 million, which means more funding for public safety, as well as repairs to streets and public parks.

In June, the California State Assembly’s Select Committee on the Status of Boys and Men of Color held a formal hearing in Salinas—with organizers, city staff, and the chief of police—to hear about the issues impacting our community.

The reality is that we do not know how this work on community-police relations will succeed in the long-term, but as we expand our efforts, we must also take a critical look at the deeper roots of the broken relationships between law enforcement and the people they are supposed to serve and protect. In Monterey County, 1 in 3 residents fall below the poverty line, and child poverty is especially high. Mending relationships with the police is just one part of the work we have to do in Salinas. And residents of the community must be the ones driving that change.