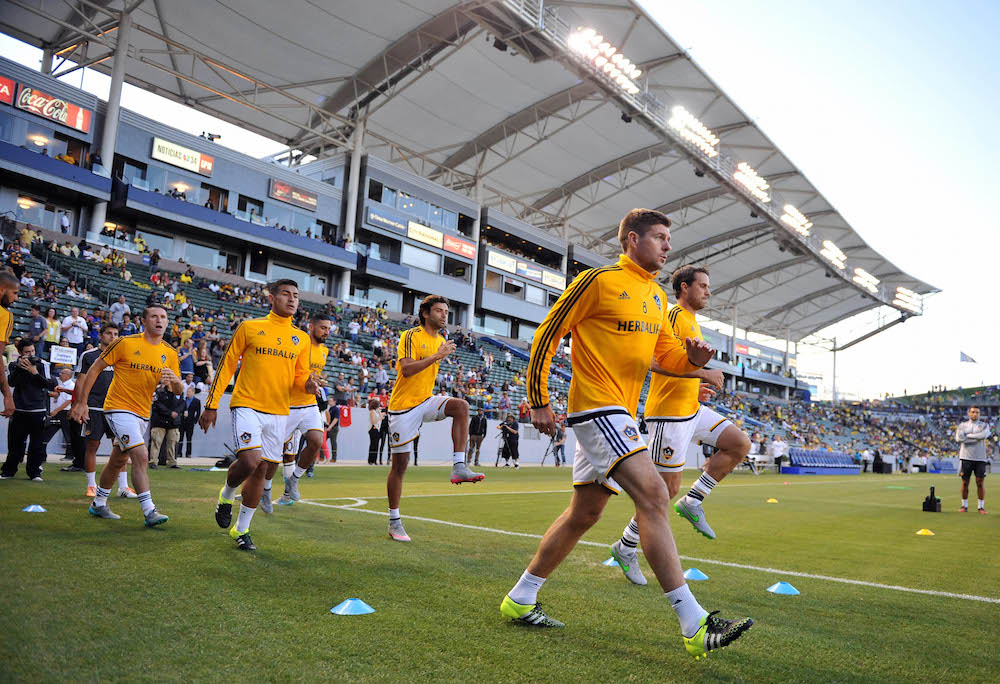 Gio scored in his opening match, and the sold-out crowd went wild. The L.A. Galaxy’s new Mexican superstar, Giovani Dos Santos, had scored earlier with fans, too, for his performance in an introductory video shown on a big screen at the StubHub Center when he cheekily answered “Minions” or “Minion” to three consecutive questions (favorite movie, superhero you’d like to be, and what you’d like to be if you didn’t play soccer). Clearly, the talented and charismatic Dos Santos, whose $34 million contract makes him the club’s priciest signing ever, is fit to be a proper L.A. celebrity. He even threw out the opening pitch at a Dodgers game the week after his debut.

Having attended Gio’s first Major League Soccer match, I was struck by how wrong it is that we usually talk about the power of sports to bring people together in the past tense, as a social-cohesion stimulant no longer needed in our supposedly more inclusive, enlightened age. Sadly, we still need sports to play this role in society. Sports still attract a far more diverse crowd than you normally see in public spaces. And this isn’t just a case of people from different walks of life coming together for a time in the same space but minding their own business. This crowd at the StubHub Center in Carson, just south of L.A., was truly diverse and united behind the same team, wearing the same jersey—identifying with each other.

In a Balkanized metropolis like Los Angeles, where so much of daily life revolves around people sorting themselves into similarly situated siloes, this is no small feat. But it is a familiar role for a sports franchise, and in this sense the Galaxy is doing for a younger generation and for many Latino immigrants what the Dodgers and Lakers have done in the past, transcending segregated cultures to forge a shared civic identity.

Soccer provides an especially intriguing case, as the sport has long struggled to reconcile its suspect foreign origins with its undeniable domestic appeal. And from its birth in 1996, the promise of the MLS has been predicated on catering to America’s two starkly distinct soccer constituencies: suburban, predominantly white, youth-soccer families, and Latino immigrants.

The Galaxy, the most successful club in MLS history, does a remarkable job of appealing to both of these constituencies, offering a model for other businesses and institutions to emulate. Mostly it does so by not trying too hard to cater to one group to the exclusion of others, adhering to a belief that the game and the “L.A.” identification alone will suffice—a charmingly old-school notion in an age of hyper polarization and ethnic differentiation.

I was moved to see at the Galaxy game (they beat the Seattle Sounders 3-1, for those keeping score) a Latino father and son enjoying the game together in their Galaxy jerseys. The dad wore a “Giovani” (number 10) jersey and the boy wore a “Gerrard” (number 8) jersey. Steven Gerrard, the Galaxy’s other blockbuster signing this year, is a legend of the game, the longtime captain of Liverpool and the English national team. He is more Anglo than any Anglo in Los Angeles will ever be, and like David Beckham before him, a huge draw for worldly MLS fans who pride themselves on waking up early to catch European soccer matches.

The coming together of Gio and Gerrard shows how the Galaxy has managed over time to blend the twin fan constituencies the MLS has always been eager to pursue into one shared identity. Latino kids will wear the Gerrard jerseys, and Anglo kids will wear those of Minion-adoring Giovani.

A decade ago, there was a danger that L.A.’s soccer scene would evolve, or devolve, in a more segregated fashion, like other parts of society. Back then, a second MLS franchise, Chivas USA, a subsidiary of one of Mexico’s fabled club teams based in Guadalajara, was established and quickly went about seeking to create an “us vs. them,” “Latino vs. gringo” rivalry. The Chivas never matched the Galaxy’s appeal, and the franchise died. The Galaxy will soon face what is likely to be a more formidable crosstown rival as the growing league will again feature a second L.A. team in 2018. The as-yet unnamed team will play in its own new stadium to be built next to the Memorial Coliseum in South L.A., and counts among its owners a veritable Who’s Who of entertainment and sports celebrities, such as Hollywood producer Peter Guber, the author Tony Robbins, and former star athletes Mia Hamm, Magic Johnson, and Nomar Garciaparra. Soccer is the sports equivalent of the cool, promising start-up everyone wants in on.

The Galaxy promotes itself as a team that is “handcrafted” in Los Angeles, and when I spoke to team president Chris Klein a few days after the game, he said the team wants to “embody the culture of our city.”

The Galaxy promotes itself as a team that is “handcrafted” in Los Angeles, and when I spoke to team president Chris Klein a few days after the game, he said the team wants to “embody the culture of our city.” Klein, a former Galaxy player, says that means everything from playing in an entertaining, offensive style, to fielding a multicultural squad that features European and Latin American stars alongside homegrown talent from communities like Inglewood and Hawthorne. It also means paying homage to sports franchises that established themselves on the L.A. sports scene well before the Galaxy, like the Dodgers, Lakers, and Kings, all celebrated in a video played before each match. This montage feels like a reach to establish a sense of rootedness, to reinforce the ideal of a shared identity.

Klein said that when the MLS was created in 1996, “we had no identity and didn’t know what we were doing.” The somewhat fuzzy vision was to translate the international game to an American audience, which meant fretting about how fans might react to low-scoring matches and ties. And so, as Klein recalls, the MLS fiddled with the rules of the game, introducing its own tie-breaking gimmicks. Such tweaks have since been abandoned, in recognition that what fans want is the real deal, as it is played everywhere, by everyone.

Klein calculates that there are 90 million soccer fans in America, and says the Galaxy’s goal now is to build the best club in North America, to close the gap with the better clubs in Mexico. The idea is to deepen the allegiance among fans who might still be on the fence, torn between being all in with their MLS team or devoting their energies to following a team back in Mexico or in the English Premier League (both leagues are readily accessible on American TV).

At a recent friendly match against Mexico City powerhouse Club America, Klein saw familiar Galaxy fans in the stands wearing Club America jerseys, and was reminded how far his franchise still has to go. U.S. soccer fans are a cosmopolitan lot, able to follow more established leagues elsewhere, while keeping an eye on the development of their home teams, flirting with the idea of settling down.

Bringing in Gio, winning at home, and taking on clubs from those other leagues all help the Galaxy strengthen their hold on their fans. And judging from what I saw recently at their home stadium, fans from all walks of life do yearn to become integrated and grounded in a shared L.A. identity.