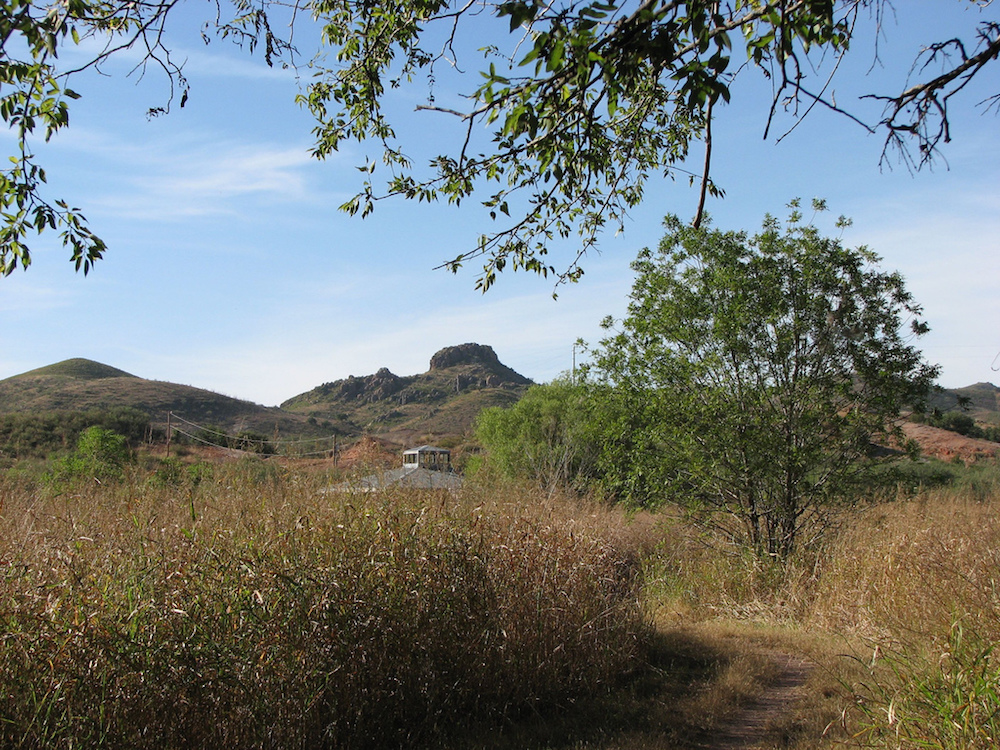 The Riparian Preserve at Water Ranch in the Phoenix suburb of Gilbert, Arizona, where I grew up, is a water recycling facility disguised as an ecological habitat. It is a diverse biome where water meets land. The city treats wastewater and funnels it into the preserve’s ponds, where it slowly filters back into the aquifer. Almost 300 species of birds, cottontail rabbits, snakes, red-eared slider turtles, and butterflies also live in the 110-acre park, as well as around its ponds and adjoining lake of reclaimed-water.

The regional library, where I first discovered Harry Potter and David Sedaris at age 11, overlooks the park’s urban fishing lake. Cormorants, great blue herons and egrets feed in the shallow ponds and reeds. It is the wild in the middle of suburbia. It is endearingly messy, and also breathtaking.

But I was not taken with the preserve when I was kid. My family hiked it on a sunny winter day in 1999. I trudged behind everyone, squinting. I wanted to go back home, read Harry Potter and imagine I was in the rainy English countryside.

I learned that just because you can drink like Bukowski doesn’t mean you can write like him.

The preserve had its troubles too. Shortly after opening in 1999, the park became a dumping site for unwanted house cats. Soon the population exploded into what the newspapers referred to a “feral cat colony,” and the local birds suffered, especially the pocket-sized burrowing owls. Authorities tried to reduce the population with traps, sterilization and relocation efforts.

I hated growing up in Gilbert, a conservative town where church steeples and preschools dominate the neighborhoods, and blonde moms in jeggings rule the grocery stores and strip malls. I hated the desert, and the stupid-hot Arizona sun, and the landscapes speckled with Saguaro cacti and dusty Palo Verde trees. I didn’t want sunny Christmases. I wanted the woods, snow, rain, and rivers. I wanted to be a writer, and writers always wrote about road trips, snowstorms, and sticky hot summers. They didn’t wax poetic on megamalls and droughts. In my mind, Barbara Kingsolver was the exception, not the rule.

I struggled through my junior year in college and worked a dead-end waitressing job. I wanted to be a novelist, but the only writing I did was term papers and maudlin diary entries. I dropped out of school and needed to get away from that feeling of failure. So after 20 years in Gilbert, I drove my rickety red Escort out East.

The car shuddered and died after a particularly wicked winter in Iowa, but I remained away from the Arizona desert. I moved around, from Iowa to Nebraska to Colorado. Every destination was picked with the same thoughtfulness of closing your eyes and swirling your finger over a map. My tattoo artist boyfriend (now my husband) inked a new section on my arm every couple months: The first pieces were an anchor on my foot, a 1940s Sailor Jerry pin-up girl on my arm, and a closed book on my forearm. I got a cowboy after we drove through New Mexico and Texas, an arrowhead while in a small town in South Dakota, and a cross on the arch of my foot after a particularly wild night at a bar in Omaha.

I started several novels but finished none. I learned that just because you can drink like Bukowski doesn’t mean you can write like him. I stopped drinking, we adopted two dogs and started hiking with them.

I found I loved the blooming cherry trees in downtown Denver, the fireflies flickering in an Iowan field, and hopping rock to rock in the Colorado River with my wiener dog, Zdzislaw.

Arizona stole me back in 2012. I visited in January, in the midst of a snowy Colorado winter. I ran everyday until my legs were sore and ate grapefruit fresh from parents’ backyard. Everything was just as I’d left it, but it felt like a fresh start. I went back to Colorado and gave the coffee shop where I was a barista my one month’s notice.

Soon, I was back in the Valley, living a few miles from my childhood home. I found work in a medical office and re-enrolled in college.

Even with my tattoos hidden under a cardigan, I stick out—and feel like an outsider in my newly reclaimed home. It seems like everyone in my town is tan, outgoing, and blonde. I am pale and quiet with a tangled mess of black hair. They drive everywhere and live at the gym. I prefer walking and taking the bus.

But, this second time in the desert, I love it. I no longer see it as a barren wasteland. I noticed bits of life tucked away in the sprawling city. I love the miles of walking paths and historic downtown. I love how Phoenix is surrounded by big hills, with the Superstition and San Tan Mountains looming nearest.

And I love that I’ve found a favorite place to go in my once-and-present home: The Riparian Preserve.

Over two years, I had grown into a hiker, runner, and birdwatcher. The preserve, I realized, is perfect for all three.

After moving back, I started volunteering at a wildlife rehabilitation center with a friend from high school and slowly learned the names of the birds, from the tiny American kestrels that dive-bombed the dry lake beds for mice to the turkey vultures hunched over carrion by the canals.

This second time in the desert, I love it. I no longer see it as a barren wasteland. I noticed bits of life tucked away in the sprawling city.

I now understood the importance of the preserve. Birdwatchers travel from across the country to see the flocks at the park. Suburban kids visit and get excited every time a rabbit hops by or a cooper’s hawk swoops overhead. The preserve has been the backdrop for some of my best memories.

Near Christmas two years ago, my rehabilitation team released a great horned owl near one of the preserve’s habitat islands at dusk. The group consisted of my husband, my friend from high school, an older couple and college-aged kids from the rehabilitation center, and my parents. We drank hot chocolate and passed around binoculars. By the time the owl disappeared into the thicket, the park had closed, and we were locked in. We jumped a fence to avoid an impromptu camping trip. It was such a mishmash of people I had come to care about on a random adventure.

Now, when I run the trails the same trails I once moped around with my family, I start at the lake. People dot the shore year round and fish for catfish, bass and rainbow trout. Cat fishermen recline in camping chairs and surreptitiously sip beer (Gilbert’s parks are “dry” and alcohol is banned). Kids fish with miniature poles next to their parents.

After the lake, I weave through the patches of deer grass and wildflowers, where amateur photographers snap pictures of newly engaged couples. When the weather is good, the trails are thick with families in coordinated outfits.

I pass the observatory and the gazebo where my husband and I got married two Octobers ago. I fretted for months about where to have the wedding. Country clubs and churches just seemed like a poor, expensive choice. I finally thought of the preserve, and realized it was the perfect fit.

The trail leading up to the gazebo parallels a creek thick with marsh grass. Every time I walk by the trail, I remember the pre-wedding jitters and saying our vows before the same mismatched crowd, our conservative families and tattooed friends.

The further I run into the preserve, the quieter it gets. The cottonwoods muffle traffic and form a shady tunnel over the trail.

I think of that one Sunday afternoon in 2014 when I finally came face-to-face with the now-dwindling cat colonies. It happened while walking my dogs. An ambulance blared down a nearby road and was followed by howls. My husband tilted his head and said that they were coyote howls. I argued and insisted they came from dogs. Our debate ended after we turned on the trail and surprised a coyote drinking from the creek. I jumped back, but the coyote just looked up and trotted away.

Later, I went looking for the coyotes with my binoculars. A park ranger spotted me on the dry lakebed. Instead of yelling at me for going off the trail, he pointed to a hill in the middle of the basin. A coyote pounced on unseen prey in the grass. Another jogged along the perimeter of the basin.

So much of suburban life in our desert is sealed off, which is part of why I once had to leave. I came back once I started seeing the cracks of imperfection. Gated communities keep strangers out. Homeowners associations maintain a sense of peaceful sameness. People spray chemicals to keep the weeds and scorpions at bay.

But the preserve remains. It is endearingly messy, a true home in the midst of the tidy suburban bubble of homes.