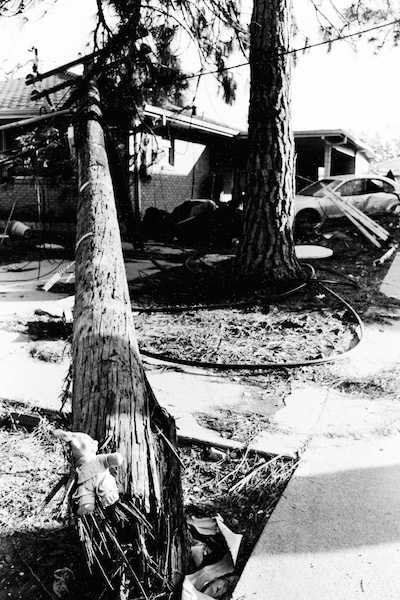 I’d just woken up in my mother’s home outside Bay St. Louis, on the Mississippi Gulf Coast. It was late February, Mardi Gras season. It was chilly, and as my mother made some coffee for me, I told her I wanted to drive into New Orleans to check it out, see what was there.

An aunt, uncle, and cousins were all flooded out from the city after Hurricane Katrina devastated New Orleans and the Gulf Coast 10 years ago. My parents were affected, too, though they had retired to Mississippi from the New Orleans area in the mid-1990s. Katrina followed them like some dog on a scent. They were among the hundreds of thousands of people across the Gulf Coast forced to leave their homes and seek refuge in other parts of the state and the country.

My parents’ home survived even though it was directly in path of the storm. “God sat on my house,” my mother told us later. But all my other family members still in the city lost everything. I hadn’t been to the city where I was born in years since I had no family left there. I fled the city decades ago for other reasons, so I was a refugee, too—and curious about what was the same, what had changed.

I grew up in Metairie, a large suburb in a neighboring parish. I couldn’t wait to leave when I was a kid. Growing up gay in the Deep South, even in the “Laissez les bon temps rouler” and carnival-loving city that care forgot, was no parade. I was bullied in the ’70s and early ’80s. I was constantly called demeaning gay slurs; I heard that some teachers in high school even called me the “class queer.” To be sure, some teachers were extraordinarily kind to me, reading my adolescent poems and encouraging my writing. But children can be brutal to one another—constant verbal assaults, rough shoulders in the hallways, the contempt of exclusion. One kid tried to take a small razor blade to me, saying he wanted to carve one of those slurs on my skin. I couldn’t always find protection from my peers, and as soon as I finished my education, I left, under cover of a marriage with a young woman I loved; we were fortunate to love each other enough to divorce a couple of years later, knowing we’d helped each other escape an abusive place.

So my relationship to the city was complicated, and maybe it was the complications that both kept me away and now, post-Katrina, drew me back. I knew that I was from a unique—even exotic—place, but homophobia had driven me from it. I wanted to know how, and even if I could, reclaim my former home.

Mother was skeptical, though. It’s dangerous, she said. There were more people that didn’t look like us, a marker of change for her. Houses looked different, many now built 8 to 10 feet in the air. Old familiar stores were gone. There was more traffic, even crime in suburban areas spared flooding, as people moved and rebuilt in other parts of the city. She couldn’t understand why I’d want to go back.

“You’re from there, but not in the blood,” she told me.

I’d heard this line before. The message was simple: You may have been born there, but you’re not like those people whose families go way back in the Crescent City—the Irish and Italian immigrants, the Creoles. We were from somewhere else, really, even if my sisters and I were born in the city.

Both of my parents were born in the country, my father in southern Mississippi, my mother in rural west Louisiana, Cajun country. My mother and her brother, Glen, had left the bayous of southwest Louisiana, to start their adult lives in the big city. She was something of a tomboy, a basketball player in high school. Glen was gay. Mother says their dad, an alcoholic, was unkind to him. New Orleans must have seemed like a city of lights on the bayou—a refuge, a safe haven, a port from which to launch their dreams. My father’s young adulthood is more of a mystery. He was 30 before he married, and I know little of his early life after he was discharged from the Korean War. He was, to me, a distant and even cold figure. He didn’t know how to be a father to me, though he was the first in my family to ask me if I was a homosexual.

As my mother tracked reports of the storm worsening in the waters of the Gulf, escalating to a category 5 hurricane, she packed my father into the car along with some clothes, and they went to stay with my mother’s sister, nieces, and nephew outside of Lake Charles, in far western Louisiana. They arrived to safety, after a grueling many-hour drive, just as Katrina hit land, its storm surge devastating the Mississippi Gulf Coast.

My father’s body suffered under the strain of the evacuation. He had been dealing with Parkinson’s disease a decade of his life, spending the last year with little control over his bodily functions, cursing my mother, running naked out doors in the middle of the night.

I caught a plane into Houston from Ohio, where I lived at the time, and then took a puddle-jumper to Lake Charles. I made it to the hospital eight hours before my father silently died at age 73, a few days after Katrina hit. His features softened. I snuck into the bathroom and sobbed. Mostly what I thought during his death, my arms wrapped around him, was this: although you didn’t know how to love me, I can still hold you and whisper in your ear encouragements while you pass through the bardo of death. In many ways, his death relieved us.

As we sat in my aunt’s trailer, my father just having passed, we listened with held breaths to news reports coming in about the catastrophic flooding engulfing the city, drowning its old charms, its histories, its complex cultural gumbo. The storm had already dissipated by this point, and a hazy sweltering heat had descended on everything.

While I never regretted leaving New Orleans, I began in those moments to feel a strange kind of protectiveness about the city. Here was a place deluged, not just with floodwaters, but with criminal inattention, with an unwillingness to improve a levee system that could’ve provided better safety for its people.

Maybe it had been cruel to me. Maybe I wasn’t from there in the blood, but the waters after Katrina spoke to me of relations thicker than blood, of the need to find and protect a sense of home in the world.

The city remained the epicenter, the ground zero of our family’s dramas, the focal point around which our lives have picked their paths.

And I was returning, again, on that February morning. I drove out on I-10, over the Pearl River into Louisiana, a sign welcoming me in French: Bienvenue en Louisiane. I imagined my mother and uncle on the same highway in another part of the state, driving toward the city, wanting a better life. I thought of the taunts and damage of my own childhood. We were all driven from our homes in one way or another.

I passed through East Orleans, so many homes still abandoned. I saw the new houses on stilts. I crested the bridge over the Industrial Canal, saw the downtown skyline, the curve of the Superdome, where so many people found insufficient shelter, and a city, state, and country that couldn’t protect them well enough. This hadn’t been my home in decades, but I felt my pulse quickening, a little throbbing in the temple, as I thought, with pity and anger, about the people who died here, about those who lost everything, about those who suffered.

The waters recede, and we rebuild, in the world, in our souls. The currents of blood and water swirl around us—and we have to take refuge with one another, and make homes as we can.