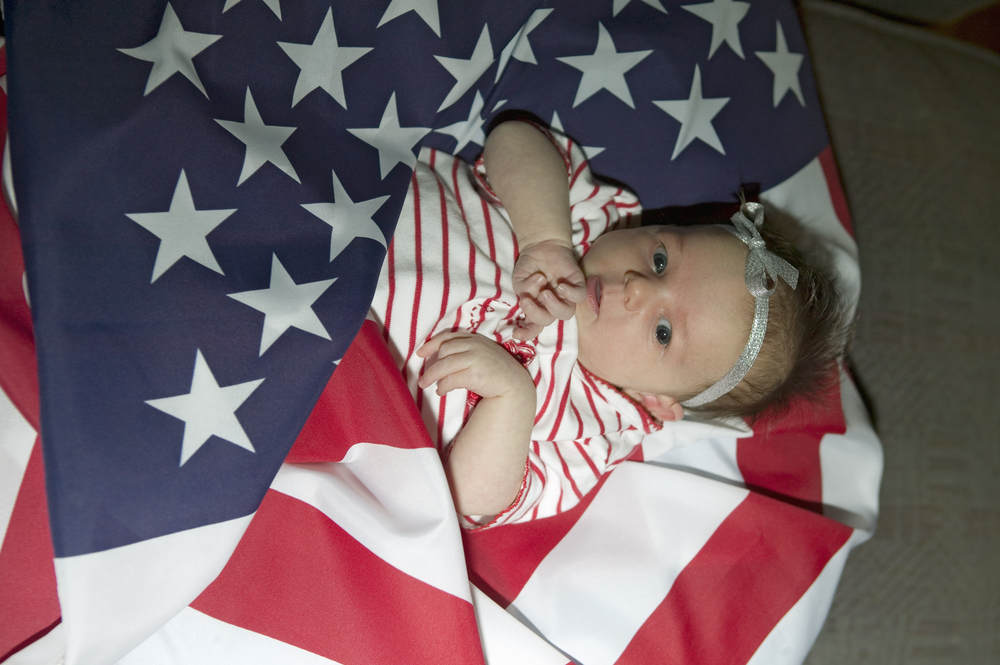 You better anchor me, baby.

Because I find it impossible to write with restraint when politicians start using babies—babies using babies!—to prey on prejudice and misinform the public in the service of winning votes.

That’s exactly what’s happening in the Republican presidential contest, as Donald Trump and his opponents make xenophobic nonsense about “anchor babies” the number one issue in the race. I won’t rehash here all the ways that people who actually know something about immigration have debunked this fantastical idea that hordes of pregnant immigrants are coming here to have babies (permit me just one statistic: 91 percent of undocumented immigrant parents had been in this country at least two years when they gave birth). Let’s just stipulate that race-baiting bunk is a staple America’s shameless presidential politics, and nothing I write will change that.

If you think you have too many babies in your community, please buy tickets to California for them and their parents. We sure could use them.

But when it comes to the babies part of this anchor babies business, I—as a Californian, as an American, as a human—can’t stay silent. I am stridently, unapologetically 100-percent pro-baby. And I’m old enough to remember when politicians were, too, kissing and cooing at any baby within sight, instead of scapegoating the diaper set for the problems of the republic.

Unfortunately, mainstream media outlets are helping to spread the ignorance by portraying anchor babies as a “problem,” or a two-sided “controversy,” or a “complex issue” (as the Los Angeles Times called it in a front page headline) when it is no such thing.

Indeed, when it comes to babies—anchor or any other kind—the only problem we face is that we don’t have enough of them.

Here’s an invitation to the rest of America: If you think you have too many babies in your community, please buy tickets to California for them and their parents. We sure could use them.

Our state is facing a historic decline in its number of young children. According to USC, California had nearly 200,000 fewer children under age 10 in 2010 as it had in 2000, and another loss in the child population of more than 100,00 is projected by the end of this decade. The losses have been particularly heavy in Los Angeles and Orange Counties. Why? The birth rate here has fallen among every ethnic group, and now is below the replacement level to maintain a population.

And guess what, America? The country’s birth rate dropped below replacement in 2007 and hasn’t recovered, according to CDC figures; by one calculation, the recession has left us with a baby deficit of 2.3 million. Which makes immigrants and their babies a solution to our baby bust, not a problem. Indeed, serious presidential candidates should probably be offering plans to incentivize the arrival of more babies–and make them more successful grownups. The biggest domestic challenge for this country is how a dwindling number of working-age people is going to support our growing population of retirees. Who will pay the taxes to support you in your old age, or buy your home when you die or go into the nursing home, if there aren’t enough younger, productive people?

Yes, I know that Jeb Bush—whose birth into one of America’s most successful families anchored him in politics—is offering a different argument: That the real “anchor baby” problem involves so-called “birth tourism” by Chinese families who come here to have babies and pick up a U.S. passport for them on their way back to their home countries. Media outlets have covered this as an “issue” for years in California regions with large populations of Chinese descent, especially the San Gabriel Valley, where I live. Isn’t so-called birth tourism a trivialization of citizenship or a terrible incursion into our communities, as Bush suggests?

Getting citizenship has always required money in some form, even if it’s just to get here and make a life. This country is full of malls and housing financed by foreigners here on a popular investor visa program. In California, the Inland Empire city of Murrieta, site of many anti-anchor baby protests, has relied heavily on such investors.

And what American in her right mind would be against tourism? In a terrific Rolling Stone story on birth tourism, one Chinese couple that came to my part of Los Angeles to give birth is shown seeing a Laker game (haters now can blame Kobe Bryant for anchor babies, too, I suppose), visiting Venice Beach, eating at our local restaurants, and doing a ton of shopping at our outlet malls. We need as much of this sort of thing as possible.

The only problems with Chinese birth tourists are that there aren’t enough of them (the highest estimates are in the tens of thousands) and that they head back to China instead of making their lives here. U.S. citizenship is seen as a form of insurance against instability back home by wealthy foreigners, and many of the U.S.-born Chinese babies won’t retain their insurance past the age of 18, since China doesn’t permit dual citizenship into adulthood. Here’s hoping that at that age, a good number of those babies will choose to remain Americans, opt to study here, and become productive citizens whose taxes pay for my Social Security.

To be fair, presidential candidates aren’t the only ones unnecessarily raising alarms about birth tourism. Even though birth tourism isn’t illegal, federal law enforcement challenges pregnant mothers flying into the country about their intentions. There’s even a federal investigation of birth tourism in Southern California, which included recent raids of maternity hotels for birth tourists.

But as of this writing, no charges have been filed against the operators. News reports suggest that some maternity tourism businesses have committed financial crimes, but it’s fair to wonder if the feds are wasting money and time that they might otherwise spend on their usual pursuits, like prosecuting marijuana activity or collecting Americans’ meta data.

Strip away the rhetoric and rationalizations, and what you have is not a “problem” or an “issue,” but an unreasonable and unreasoning fear of babies. After all, babies and their immigrant parents represent everything we want and need as a country—a willingness to invest in the future, a commitment to risk-taking, striving for a better life.