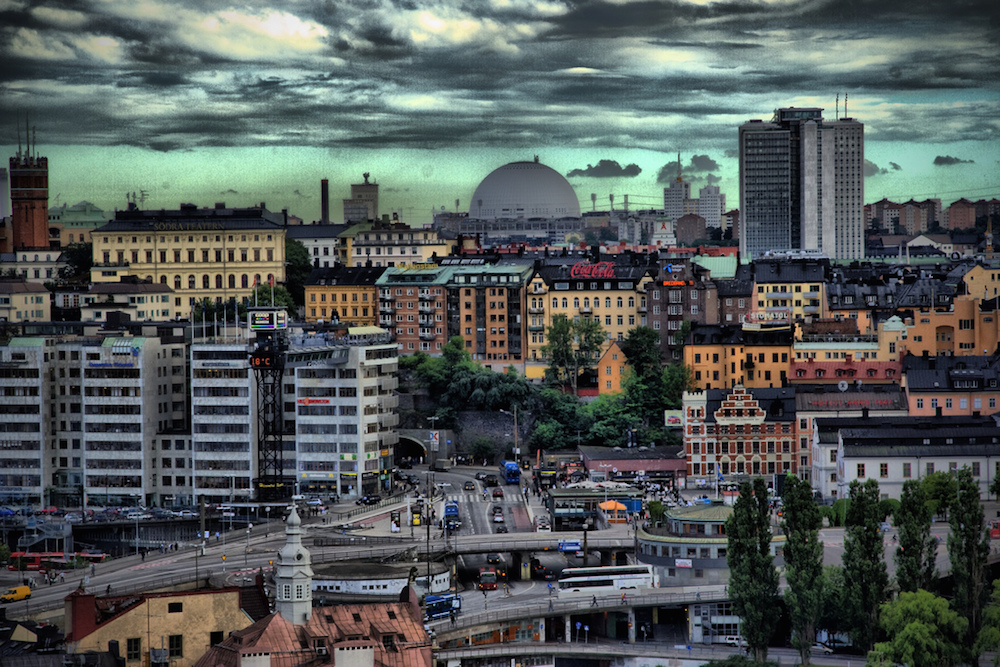 We are standing in front of a magnificent building at Fiskargatan 9 in Södermalm, Stockholm’s bohemian southern island. The penthouse once belonged to a controversial businessman, Percy Barnevik, the former CEO of the Swiss-Swedish energy giant ABB, but he’s not its most famous resident.

“On the top floor, Lisbeth Salander rented an apartment with 21 rooms,” says Ylva, my friendly and enthusiastic guide. For just 130 Swedish krona ($15) you, too, can join Ylva on a walking tour across Södermalm, the home base of late crime journalist Stieg Larsson’s Millennium series and the setting of many of the events in his novels.

Lisbeth, of course, is known to the world as “the girl with the dragon tattoo,” thanks to Larsson’s bestselling trilogy. And while the man who created her died in 2004 before she reached the height of her fame, she lives on in a newly published book in the series. In the new installment of the series, The Girl in the Spider’s Web, Lisbeth is still at home at Fiskargatan 9.


Seeing Sweden become a more diverse society has been a good thing. But the changes happening in Sweden also have an ugly side.

While the townhouse at Fiskargatan 9 looks as it always has, the surroundings have changed profoundly since Lisbeth first took up residence there a decade ago, from a Swedish working-class area to a melting pot of many cultures, with restaurants nearby boasting food from Eritrea, Burma, and Ghana. Seeing Sweden become a more diverse society has been a good thing. But the changes happening in Sweden also have an ugly side. When the Millennium books first came out, the violence and corruption she and her fellow investigator Mikael Blomkvist uncovered shocked readers, including Queen Silvia of Sweden, who told the media she could “not recognize my beloved country in these stories.”

Yet the trilogy predicted many of the worrying developments that changed this Nordic welfare state in recent years—in particular, the dramatic rise of xenophobic political parties and a growing surveillance state.

When Larsson wrote his books, the far-right Swedish Democrats championed Nazi ideals and scored less than 1 percent in opinion polls. Now they claim to have shed their Nazi leanings and, thanks to an anti-immigrant platform, have the third highest number of members in the national Parliament. They actually are the leading party in many polls.

And while 10 years ago a proposed surveillance law on the National Defense Radio Establishment earned a lot of opposition and the term hacktivist was basically unknown, the Swedish government today, like many European governments, requires mobile phone operators to track their customers on a permanent basis—and store this information for at least six months. This makes the kind of surveillance overreach conducted by the renegade “Section” in the Swedish Security Service in The Girl Who Kicked the Hornet’s Nest seem limited by comparison. And Larsson’s descriptions of Salander’s hacking abilities in the first three books seem almost like kidstuff compared to the constant doxing we see today—consider the recent Ashley Madison exposure, which was apparently motivated by a Salander-esque quest for justice.

What would Larsson—whose fictional villains were fascists and Nazis, and whose hacker heroine could find her way into even the most secret hard disks of the Swedish Security Service—have made of all this? The man behind the Millennium series was a committed communist whom I met several times during the 1990s while working for Swedish radio’s international service. He wasn’t the kind of communist who sympathized with the regimes of Soviet Union or China, but someone who believed in radical equality. As a citizen of a small, neutral state, his focus was the fight against racism and colonialism. 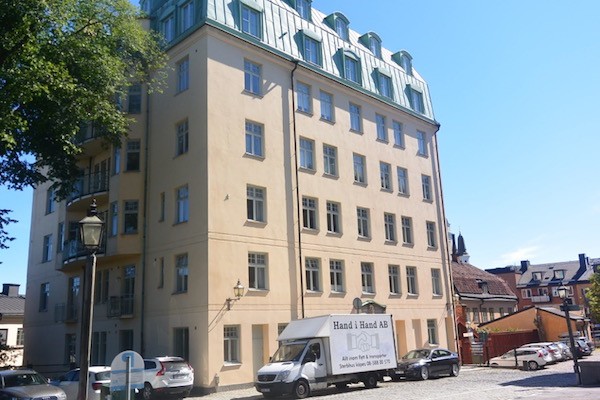 Fiskargatan 9 in Södermalm, Stockholm, where the character Lisbeth Salander lives.

This made sense since he was raised in a working-class family with leftist sympathies in the far north. And he used his prodigious intellect in the service of very strong opinions. He cared very deeply about Sweden’s responsibilities to the people within its borders and to its neighbors. While working a poorly paid job as editor for the Swedish national news agency and writing novels at night, he was building up the magazine Expo, whose investigative journalism aimed to expose racist and far-right organizations.

Larsson and I were in similar circles because we were both journalists and involved in Sweden’s peace movement. I remember once, at the national press club in Stockholm, having a spirited discussion with him about the pros and cons of a Swedish membership in the European Union (which Larsson opposed to strongly). And when I was deeply involved in reporting on and developing new concepts of citizenship that weren’t limited to national boundaries, I had a late morning meeting at Larsson’s home to discuss European migration policies. (I had to ring the bell for a long time before the bleary-eyed writer opened the door!) I remember Larsson’s dark world view from that meeting—it seemed to me that he couldn’t sign up for the idea of transnational citizenship because he saw too many enemies all around.

It was only later that I heard about other traumatic, violent moments early in his life that must have influenced this view. One friend of Larsson’s wrote about how Larsson, at 15, observed a brutal gang rape of a young girl in his hometown of Umeå. Another friend, who wrote a chapter in a book included with a boxed collection of Larsson’s work, told a story about how Larsson joined the anti-colonial war in Eritrea in his 20s, teaching a squad of female guerrillas to launch grenades.

The early traumas and Larsson’s political beliefs are evident throughout the three novels he wrote. The Lisbeth of the first three books is shaped by a relentless lust for vengeance toward her father and the guardians who abused her, sexually, physically, and emotionally. Figures of authority could not be trusted. The only one she could trust was Blomkvist, the journalist (and sometime lover) who dedicated his life to uncovering the wrongs of bankers and businessmen.

David Lagercrantz, the Swedish crime-journalist-turned novelist who is the author of the new book in the series, is another long-time colleague of mine. Like Larsson, Lagercrantz stayed up daily until 4 a.m. to research, reflect, and write the novel. Having read the new volume and assessed the first published reviews, I can say Lagercrantz has done a capable job of bringing our superhero Lisbeth back on line.

But when I interviewed Lagercrantz last week, the distinctions between him and his predecessor were very clear. Lagercrantz is a 53-year-old descendant of a noble family who had already had a successful career as a ghostwriter. He brings a different political energy to the story. There is much less explicit violence, for one. And the first comment Stieg Larsson’s father made on the new plot was, “What happened to all the sex?”

This is the inevitable result of a skilled, friendly, soft-core leftist taking the world over from an in-the-trenches communist who might have been shy, but was completely hardcore. “I call myself a champagne socialist,” Lagercrantz told me, underlining the fundamental differences in time and authorship. While Lagercrantz’s aristocratic background is part of the explanation, the shift towards a reality that resembles many of Larsson’s violent predictions has further changed the context. Real-life occurrences—like the attack on a socialist youth camp in Norway by a right-wing extremist—have undermined the original fictional approach of the Millennium books. To keep the books feeling ahead of the curve, Lagercrantz needed to change and add to the plot, by widening the conspiracies, for instance. He didn’t feel it necessary to identify more Swedish enemies; it was easier to introduce that well-known bogeyman, the U.S. National Security Agency.

And Lagercrantz knows he lives in a post-Lisbeth Sweden: He told me that he wrote The Girl in the Spider’s Web in total secrecy on a unconnected computer “to avoid Lisbeth Salander-alikes”—hackers.

Lagercrantz had little more ambition than to write a great story, earn some money, and have fun. There’s nothing wrong with that approach in literature, of course, but what I miss, as someone who continues to work on issues of democracy, is another voice committed to defending egalitarian values. The impression that prevails after a few days in Södermalm is that Larsson’s stubborn radicalness is gone from Swedish public debate, though Sweden could use that kind of critical eye more than ever as the country loses its progressive edge. Instead, Sweden has become a nation with a powerful xenophobic party, a political debate dominated more and more by speech that targets refugees, foreigners, women, homosexuals, and political activists—and a media industry focused on money and entertainment. With a reality like this, what kind of fiction can we produce?