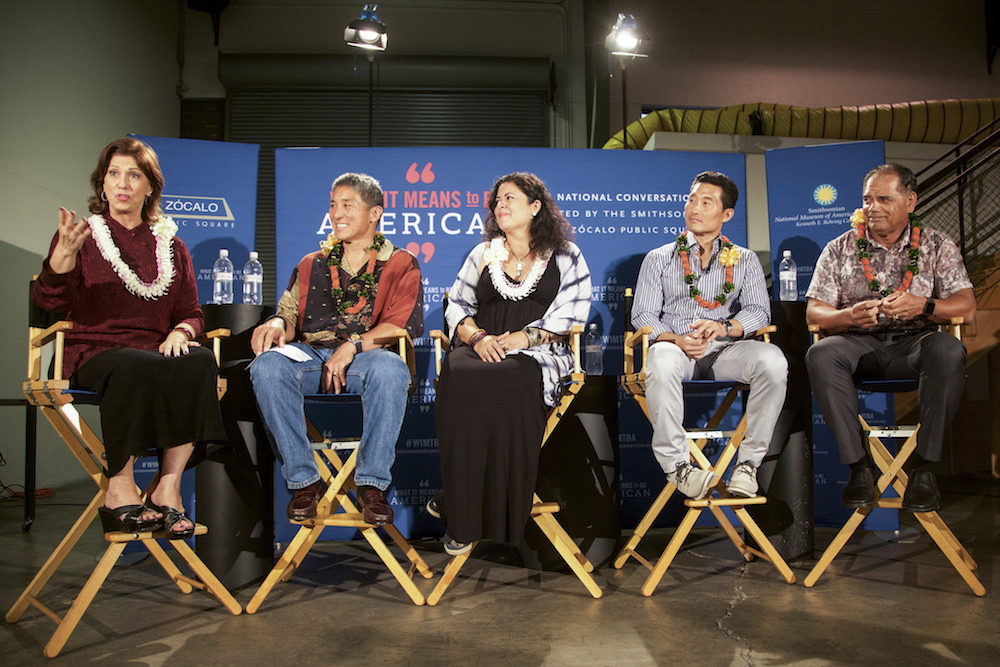 Hawaii is such an assortment of races, ethnicities, and cultures that it’s hard to pick just one way to describe its unique mix. So what can it teach the rest of America about how different people can all live together?

In front of a lively full house at the Kaka‘ako Agora in Honolulu, a panel moderated by Leslie Wilcox of PBS Hawaii took on this question at a Zócalo/Smithsonian “What It Means to Be American” event in partnership with the Daniel K. Inouye Institute.

Maya Soetoro-Ng, who is the director of community outreach and global learning for the Matsunaga Institute for Peace and Conflict Resolution at the University of Hawaii at Manoa, said that Hawaii, of course, is not perfect, but she is glad her daughter is growing up here. She relayed a story about her husband Konrad Ng, who directs the Smithsonian Asian Pacific American Program and didn’t grow up in Hawaii. As a kid, some bullies pushed him off his bike and made jokes about his Chinese heritage.

“That’s something our daughter will never face” since she’s growing up in here, Soetoro-Ng said. “They are in a place where they have access to people who will embrace them. Not simply because there are a lot of mixed-race people, but because there is a strong sense of community. One of the positive things is also that we have a strong connection to tradition.”

She cited a festival celebrating Okinawan heritage, the practice of taro farming, and indigenous reforestation projects as examples of the state’s residents celebrating where they’ve come from.

“One of most refreshing things about living here is there is an awareness about race, but not a judgment about race,” said Daniel Dae Kim, the actor best known for his roles on Lost and Hawaii Five-O. He shared a similar story to Soetoro-Ng’s that showed the contrast between his own upbringing in Bethlehem, Pennsylvania, and his son’s experience in Hawaii.

When Kim was growing up, his family, which had emigrated from South Korea, was the only Asian family in town, and he was regularly singled out. “The word ‘chink’ for me was something I heard as much as I heard love or hate,” he said.

But Kim’s son didn’t hear the epithet until he was 13. When he asked Kim what the word meant, Kim asked who called him that. “Nobody,” the son said. “I read it in a book.”

“That summarizes Hawaii for me,” Kim said. It’s “the most racially harmonious place you can live and still speak English.”

What makes Hawaii unique is that “there’s a great mixture and you grew up around it,” explained Corbett Kalama, vice president of real estate investments and community affairs with the Harry and Jeanette Weinberg Foundation. He talked about growing up with a heritage that included Native Hawaiian, Chinese, Portuguese, and Danish roots. “I’m local,” he said, to laughs from the audience.

Aloha—which is a greeting for goodbye and hello, and also has been variously explained as meaning affection, peace, and compassion—is truly part of the island’s spirit, he said. It means that there is “the willingness to include people, to be caring, to be kind, to humble oneself to serve.”

Yet Wilcox asked the panelists to acknowledge that Hawaii isn’t a total racial paradise. “We might be able to teach [the rest of America] by examples that are not flattering as well,” she said.

Kalama agreed. He talked about when he and his wife, who is blonde and blue-eyed, check out at supermarkets, clerks don’t assume they are together.

“My initial reaction was burning on inside,” he said. But he learned to chuckle and say that they are indeed married and point out how lucky he is.

“Growing up in Hawaii, we learn to be patient,” he said. “We have to continue to educate.”

Marketing executive Guy Kawasaki added that he didn’t think “the mainland is so heinous.” He said he has never felt as if his Japanese heritage has held him back. He attributes that to his upbringing in Hawaii.

“One of the real action points is to get people to physically get to know each other, to be in close proximity so that can break stereotypes,” he said. Then, it’s easy to see how everyone has so much in common; they all just want a better life for their kids, he explained. “If you’re separate, if you’re in your own little pipe, you ascribe characteristics to people because you don’t know them.”

But Soetoro-Ng cautioned that such familiarity also can breed complacency. “We are also a little bit afraid of confrontation and discomfort here in Hawaii,” she said. “I get it. Everyone is my aunty. … We can do it with love and positive energy and optimism, but we have to uncover some of the inequalities.”

And while the panelists couldn’t agree on which metaphor was most appropriate for Hawaii’s mixing of races, cultures, and ethnicities, Kim did offer a riff on how he liked to think of Hawaii.

In the question-and-answer session, the panelists’ belief in the importance of empathy—toward Native Hawaiians, Micronesians, and others—became apparent.

Soetoro-Ng shared a lesson she learned via social media.

“My brother has some detractors,” she said, referring to President Barack Obama.

After the laughter died down, she talked about how one of these detractors found her on Facebook and said some terrible things about her family. So she looked at this woman’s Facebook page. Sure, she saw things that showed their differences—this woman was a supporter of the Tea Party and posted a picture of a woman wrapped in an American flag toting a rifle. But when she looked a little deeper, she saw some pictures of her kissing kittens and pictures with her beautiful children.

“It became impossible for me to completely demonize her,” Soetoro-Ng said. “Do I want her over for tea? No. But there was a moment I recognized she is doing the best she knows how with her family.”

To close out the night, Kalama led the crowd in a rendition of the revered anthem of “Hawaii Aloha.” Everyone in the crowd began holding hands without prompting. The harmonies filled the room. 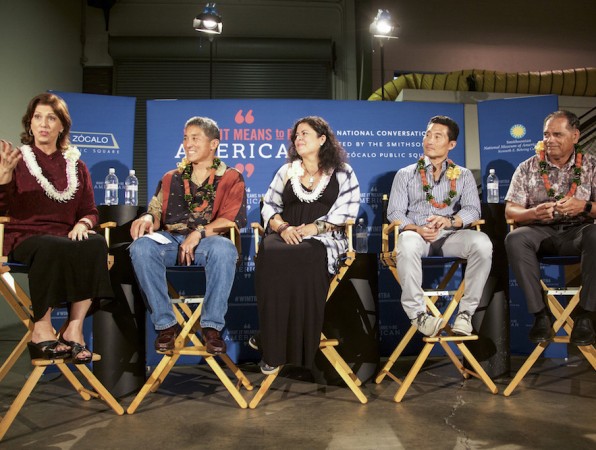 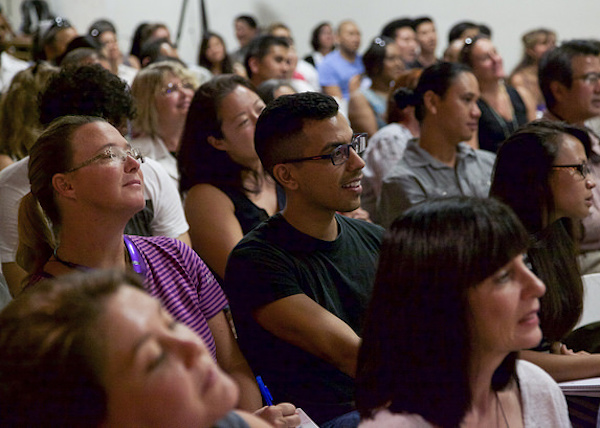 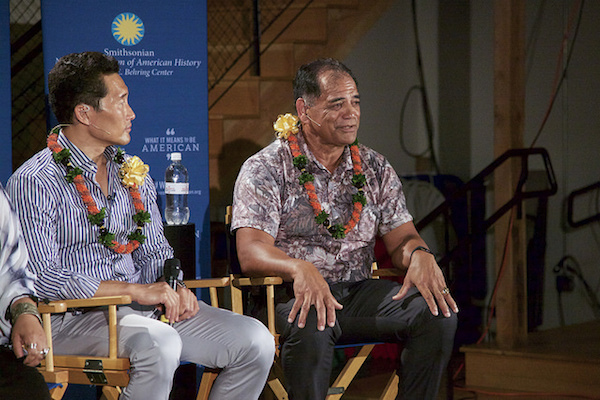 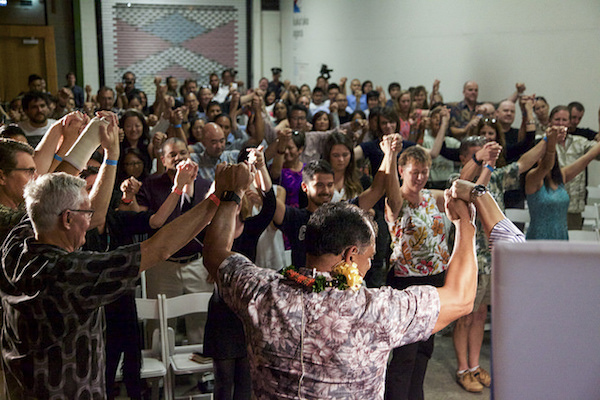 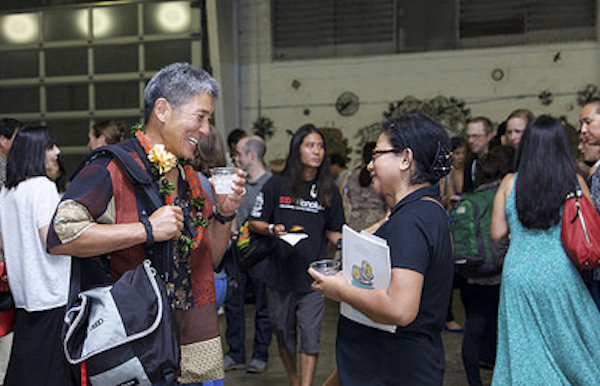 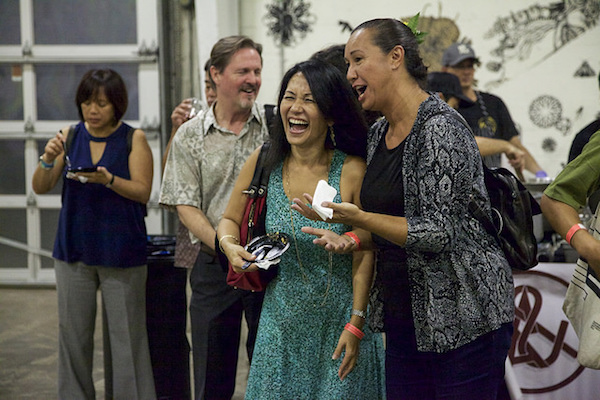