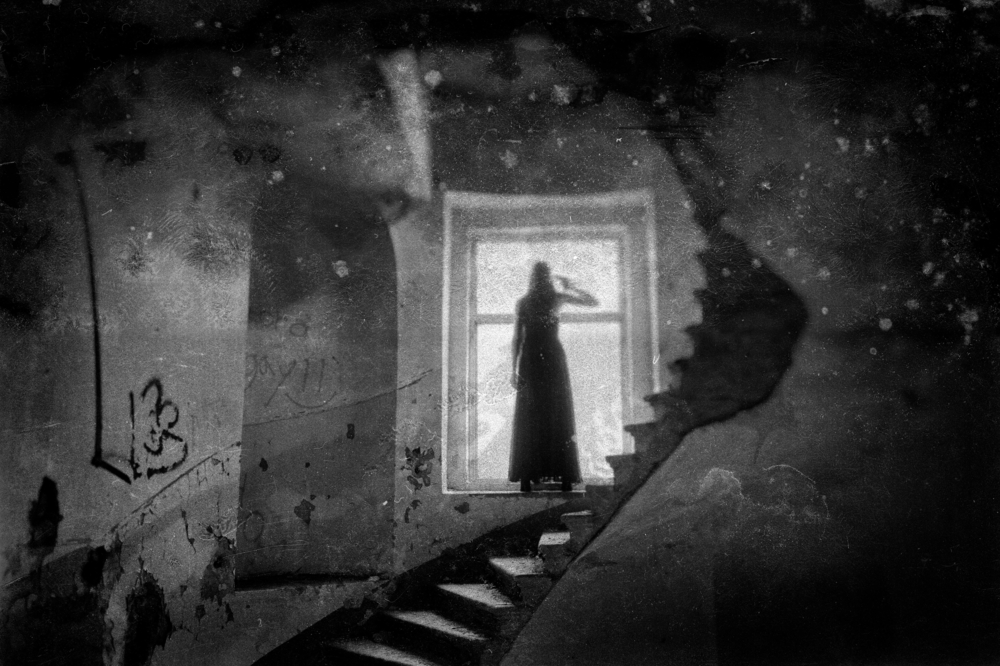 The story comes unbidden. Unbidden? I mean to say that I never set out to tell it. Still, I’ve told it many times. There’s usually drinking involved, low lighting; it’s always toward the end of an evening. And so, the story unfurls. Not always, because I’ve seen its effect. I’ve lived with the story for so long—37 years, give or take a year—that I know what it can do to a listener upon hearing it, even though I feel nothing when relating it. I could just as easily be telling the plot of an old Twilight Zone episode. But the story chills people. The guests go quiet. Things get still.

The story isn’t mine. It belongs to my late mother. She was a teenager, living with her family in La Puente, when one night she heard a gentle rapping on her bedroom door. The door opened and her aunt, who was living with them, let her know in a whisper that she was getting up to make breakfast and what would she like to eat? Then she left the room. My mother went rigid with fright, because her aunt had only days before left for a trip to Yucatán. She was trying to make sense of what she had seen when she heard sobbing. It was her older sister, who shared the bedroom with her, crying in the twin bed next to hers. One of them asked the other (my mother couldn’t be sure who spoke), Did you see that?, and the answer was a crashing wave of grief, wailing that woke up my grandfather, who ran to their bedroom to find his daughters repeating over and over, She’s dead, she’s dead. Mi tía está muerta!

There’s more to the story. After my grandfather chides his daughters for being ridiculous, for believing in what they think they saw, just a short time later there’s a phone call, well before the sun has come up. Cut to my grandfather, hurriedly getting ready to leave the house, dragooning my mother—who, at 16, had just earned her California driver’s license—to take him from La Puente to LAX, amid early morning traffic, so he could fly to Yucatán where his sister had been killed in a grisly car accident. Not till many years later did it occur to me that for my mother, an inexperienced driver, having to trek all the way to LAX may have been as terrifying as what she’d seen that night. But when your mother is first telling you her ghost story in your for-whatever-reason darkened apartment, at night, and you couldn’t have been older than eight, that sort of detail can escape you.

There’s more. Soon, the home in La Puente is haunted, or at least the hallway leading to the bedrooms is. First they hear pacing, a padding of “feet” in that hallway behind them as they sit in the living room trying to watch My Three Sons. Then it’s the hallway saturated in perfume, the aunt’s perfume, an unbearable reek. Finally, their priest is consulted and he believes what they tell him, and he agrees to perform an exorcism. He sprinkles the holy water, he recites from the Bible, and he tells the ghost, You don’t belong here anymore. You’re dead. You need to leave. There’s no longer any need for you here. And she goes. No more haunting. The end.

After the sighing, after the blinking, an occasional head shake, someone will ask, When did your mother tell you that story? Of course, when I told this story as a boy, and then as a teen, nobody (or at least no one that I can remember) ever asked that, but I would volunteer that I had heard it when I was a kid, as a way of saying, If you think you’re freaked out, imagine how freaked out I was when I first heard it! It was bragging, like saying I’d ridden on this coaster a bunch of times, so no big deal. But then I’d tell this story in my 20s, 30s, and now 40s. And when revealing the age I first heard it, there’s no comment but certainly an unspoken question: Why would your mother tell you this? Why would she bequeath me her haunting?

I don’t know, and I’ll never know. Over the years, though, I’ve tried to guess. If my memory isn’t completely betraying me, my mother seemed pensive that night. I dare say she seemed sad. I don’t remember my father being in our apartment, though he may well have been shut away in their bedroom. But he certainly wasn’t in that dark living room, the only light coming from our porch light when, sitting on one end of our sofa, she told us about what had once happened to her. I think she forgot we were there, me and my younger brother and baby sister. Maybe she was telling, aloud to herself, this incredible thing from her life, as if to reassure herself her existence wasn’t what it seemed. She had seen a ghost at 16, was married at 19, and had three children by the time she was 26. Her life was circumscribed by taking care of us, taking care of the house, and working a job. But this amazing thing had happened.

Then sometimes I think she knew we were listening, but didn’t mean to terrify us. She just wanted us to know our mother had seen things. That she had been a girl who once drove her bereft father on a busy freeway because her mother and older sister didn’t drive, drove him all the way out to LAX, where she’d never driven to before, palms sweating on the steering wheel, then drove all the way back to La Puente by herself, with probably not so much as a Thomas Brothers in the car to help her if she got lost, and did this and more—had lived with a ghost. That this is the story she meant to tell but couldn’t articulate. That she was brave. That she confronted mystery. This is what she couldn’t say—didn’t know how to say—but only that she had seen the newly dead at her bedroom door, and what does it mean, children? what does it mean?

*An earlier version incorrectly referred to Villalon’s mother as having three children by the age of 24. She was 26 at that time.