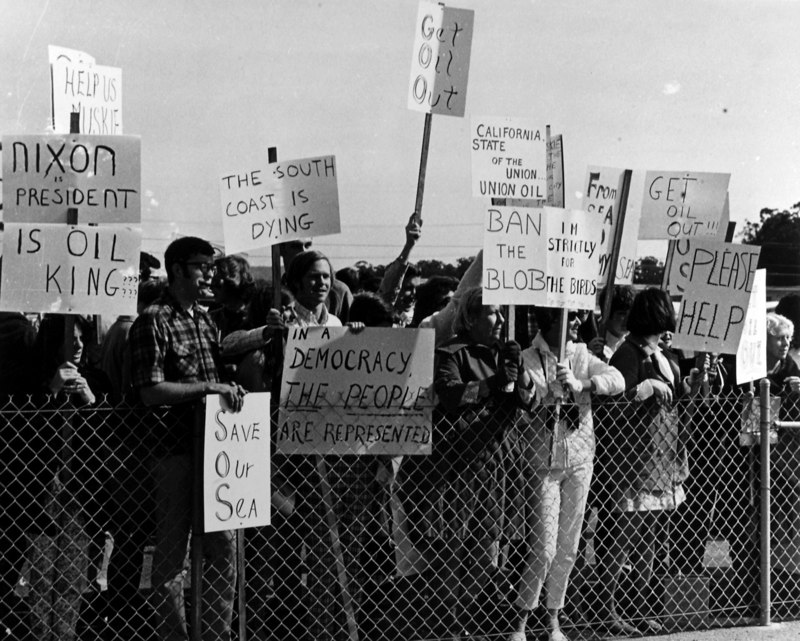 On the morning of May 31, Robert Hubina hurt his foot, so he skipped surfing to walk on the beach in Ventura, where he saw a dolphin with black tar in its mouth, lying dead amongst the rocks. He quickly realized it came from the 100,000 gallon Goleta oil pipeline spill north of Santa Barbara and took a photo with his phone. Then he saw another dolphin and photographed that, too. The two photos were shared more than 2,300 times on Facebook, with people adding anti-oil hashtags, including #leaveoilinthesoil.

The history and idea of California are so tied up with oil—from the oil fields of Bakersfield and Signal Hill to millionaires like J. Paul Getty and Armand Hammer to the state’s famous car-and-freeway culture—that it is hard to imagine the state without oil. But that is exactly what many Californians are imagining.

For decades, any discussion of limiting oil was quickly overwhelmed by fears about job losses or high gas prices, and as suburbs and cars expanded, oil consumption rose. Today, with the drought making the idea of global warming more real, there’s a different kind of discussion.

Technologies as diverse as Facebook, compost bins, and electric vehicles have made many Californians see themselves as participants in building an oil-free future, without much fear of the potential downsides. And the participants are hardly ideologues. When I found Hubina early one morning in June, he’d just come back from surfing. He recoiled when I asked if he considered himself an environmentalist. “No! I love nature. Everyone loves dolphins.”

To better understand this change, I recently drove north along the coast to Santa Barbara. It was in this wealthy jewel-box community that the modern environmental movement was born in 1969, with a 4-million-gallon oil spill. Photographs of thousands of pitiful oil-soaked birds sparked the creation of Earth Day and the EPA, among other environmental institutions.

“The oil hit the shores and it energized us,” said Paul Relis, who was one of the original members of Get Oil Out, or GOO, a grassroots activist group that expanded its mission from cleaning up the oil spill to a radical opposition to oil use itself. Relis, like many transformed by the spill, went on to a lifetime of environmentalism, working at California’s own environmental protection agency and then as entrepreneur with a company that converts waste from 40 Southern California cities into renewable natural gas. “We developed a blueprint for getting off oil,” he says of his fellow activists. “But, unlike 45 years ago, now we have the technology to do it. California is kicking ass.”

In June of 1969, Marc McGinnes was a young lawyer with a new baby when Republican Congressman Pete McCloskey encouraged him to move to Santa Barbara to start the new field of environmental law. McGinnis taught environmental law for 33 years at UC Santa Barbara. Looking back, he has regrets. The environmental movement deflected energy from the civil rights struggle, he says. What’s more, the movement morphed from a citizen’s initiative that was concerned with community into a consumerist one. Consumers saw environmentalism as self-interest, used purchasing and boycotts to vote with their pocketbooks, and when it came to oil they were torn between their cars and their environmental aspirations.

For decades, Californians voted like conflicted consumers, too: When oil prices were low, they voted against oil drilling offshore. But when oil prices were high, they’d reverse their opinion on the sanctity of national parks and pristine beaches to vote in favor of drilling, according to work done by UC Santa Barbara professor Eric R.A.N. Smith.

Santa Barbara became a demonstration project, with wealthy locals offering both money and volunteer time to back a citizen’s campaign against oil that didn’t have support elsewhere. They supported the Environmental Defense Center, a public interest law firm that has worked on behalf of cleaner oceans, air, and endangered species while taking on dozens of cases against oil exploration, extraction, and processing, not to mention a golf course owned by the oil company ARCO, since 1977. Starting in 1971, the Community Environmental Council worked to solve local problems in sustainable ways. When local landfills filled, they pioneered city recycling, and then exported their model statewide; in 2004, they decided to try to move the region off of fossil fuels within this generation, focusing on reducing oil demand, rooftop solar and electric vehicles.

The rest of California is now starting to think a lot like the utopians of Santa Barbara. Recently, the state legislature prepared Senate Bill 350 to reduce the state’s oil consumption by half by 2030. In a July poll by the Public Policy Institute of California, the bill was supported by 73 percent of Californians. Rather than being afraid, a surprising number saw an economic upside in getting oil out: In polls, 43 percent of Californians said that cutting gasoline use would create jobs, while only 13 percent said it would kill them.

SB 350’s radical prescription on oil use was defeated politically, without a vote, in part by the Western States Petroleum Association, which had funded 14 “grassroots” groups with goofy names like “Fed Up At the Pump,” and “Tank the Tax.” (Moderate Democrats, who must depend heavily on corporations for campaign contributions in California’s new election primary system, blocked the oil provision.) But outside of Sacramento, Californians just aren’t that into oil anymore: Between 2008 and 2014, the country’s highest gas prices led drivers to decrease their gas consumption by a billion gallons a year

No place in California has been more beholden to oil and more bedeviled by it than the East Bay city of Richmond. There, the grid of modest houses ends at the train tracks and the refinery picks up with streets named Xylene and Petrolite. Richmond is about as far from a jewel-box of billionaires as you can get: The Chevron refinery is so much a part of the town’s identity that Richmond High’s mascot is an oil can. Still, Richmond has become a leader in the push to eject oil from California. After a disastrous refinery fire in August 2012 that sent 15,000 people to the hospital, the city elected only anti-Chevron candidates in 2014 even though the company spent $72 per voter.

The history and idea of California are so tied up with oil … that it is hard to imagine the state without oil. But that is exactly what many Californians are imagining.

I caught up with Andrés Soto, musician and organizer for Communities for a Better Environment, in the organization’s big downtown space decorated with pictures of radical abolitionist John Brown, labor activist Joe Hill, and NSA whistleblower Edward Snowden. Soto’s story is as much about 30 years of successful neighborhood organizing as it is about Chevron—and how the fire, the company’s failure to support the local hospital, and demands for tax breaks have eroded its social license to operate. Eventually, Richmond voters saw no upside in accommodating the company. Soto is convinced that Chevron is not part of the city’s long-term future. As oil demand falls, Chevron will hang on while smaller refineries close, but eventually it will close too. Anyway, rising sea levels will begin to encroach on the refinery’s cooling towers, which were built on reclaimed land. Soto wants the city to make plans to use the refinery’s site for cleaner energy production: solar, wind, or tidal.

At AdamsCrest Farm in the Richmond hills, the local non-profit Urban Tilth is tending gardens at an unused school where they grow more than 5,000 pounds of produce a year. The refinery is the biggest thing on the horizon, but it’s not part of the future imagined by Jessie Alberto, who coordinates volunteer farmers and interns. Alberto is studying geology not to work for oil companies—which have employed generations of geologists—but with the aim of being an urban planner. There are more jobs—and more hope—in the crazy eruptions of squash vines and piles of compost behind him than in the refinery. But he recognizes that Chevron has kept property values low in Richmond, making it one of the few affordable areas in the Bay Area. He’s wary of making the farm too neat or artsy enough to attract gentrifiers. “It’s good to have some chaos,” he says.

When Gov. Brown took SB350 out of the running, he said that Big Oil had won a skirmish, but would lose the war. The losing of that war will take some time: The state uses 629 million barrels of oil yearly, is the third largest producer and third largest refiner in the U.S.

But one reason the war will be lost is that Californians are no longer acting like conflicted consumers. They have now purchased more than 123,000 electric and plug-in electric vehicles. As of fall 2014, 10 percent of new vehicle sales in the state were either electric, plug-in hybrids, or hybrids like Priuses. This is not enough to change the state’s energy balance, but seems to be enough to change the psychology.

From Richmond, I drove over to Albany where some old friends wanted to show me the new blue Nissan Leaf that they’ve named “The Toad.” Their daughter, 15, sees signs of climate change everywhere from the neighborhood’s dead lawns to the snowless Sierras. She championed the little electric Leaf when one of the family’s two cars needed replacing. Leasing a Leaf—with state and federal incentives—fit the family budget, and the parents liked the idea of skipping the cost and hassle of buying gas.

They even installed solar panels that feed the Leaf, making them participants in generously funded state programs—and in a very different future. As we whizzed noiselessly over the brown East Bay hills past the Phillips 66 refinery in Rodeo, my friends and their kids talked about battery range as avidly as they had talked about Fruit Ninjas video games a few years ago. Not being gasoline consumers has become part of their identity. They aren’t afraid. And it is very easy to imagine the refinery gone.