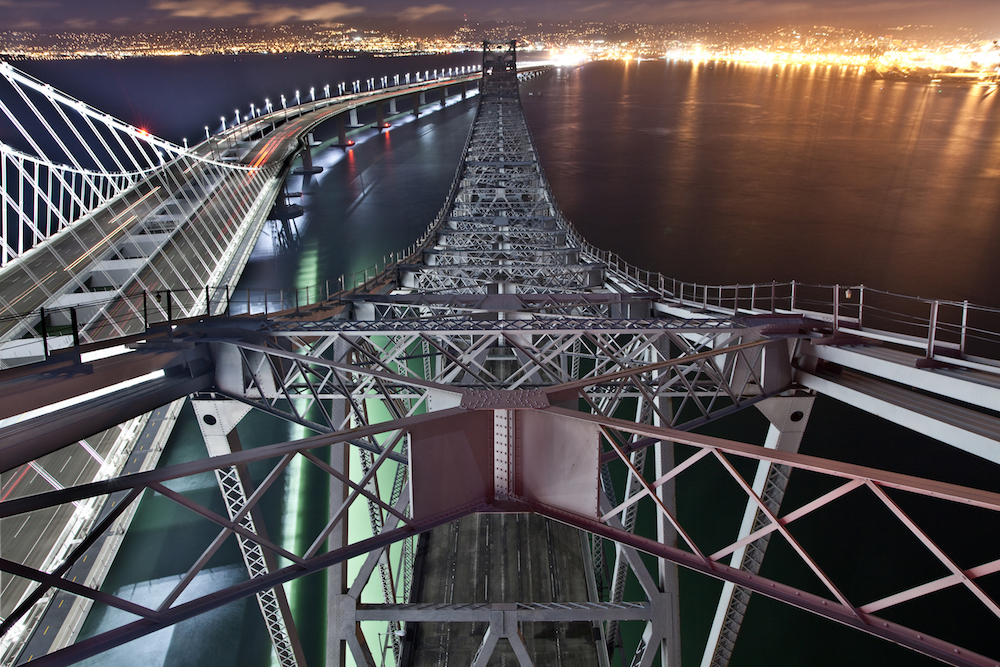 On November 14, if all goes as scheduled, a monumental piece of engineering will unceremoniously sink beneath the San Francisco Bay. Known as “E3,” it is the largest load-bearing pier of the cantilever portion of the historic Oakland-San Francisco Bay Bridge—a structure taller than the Great Pyramid. The Bay Bridge is not our most famous bridge—that’s the Golden Gate—but it is our most innovative one. It did its work invisible to the million commuters who drove across it every workweek.

On Saturday, E3 will be cordoned off by layers of security before undergoing a controlled demolition. The monumental caisson (engineering parlance for an underwater concrete sarcophagus) will be encircled by a curtain of bubbles to dampen the destructive shockwave caused by 600 demolition charges. This will happen in the midst of extreme scrutiny from environmental watchdogs, while convoys of boats measure water quality, marine mammal movements, and underwater acoustics. When the six-second explosion is complete, the last great reminder of the “greatest engineering feat of modern times” will disappear under 50 feet of Bay brine.

We mourn the loss of great works of architecture like Penn Station and decry the wanton destruction by Islamic fundamentalists of Palmyra or the Buddhas of Bamiyan; we know that something beautiful and great has been lost forever. When a bridge is taken down, it rarely makes the papers. Bridges, as some engineers will tell you, have one function: To get you from Point A to Point B, safely and efficiently. Form following function, sometimes without the form.

We should take a minute to mourn the passing of “Old East.” It was a true workingman’s bridge: “It’s rivets, it’s steel. It’s dirty at times. It’s a means to an end, to get by. You’re working and you’ve got to cross this thing, but it’s still looking out for you. It’s taking care of you. … It’s a blue-collar bridge,” said Richard Mooradian, a structural steel welder on the former eastern span for Caltrans, who was interviewed by UC Berkeley historians for the Bay Bridge Oral History Project. In fact, it is—was—comprised of 650,000 pounds of rivets. The 22 million pounds of steel was, at the time, the largest steel order ever placed in the U.S. By the mid-20th century, the rivets and I-beams of the cantilevered Old East were supplanted by high-tension bolts and pre-stressed concrete. 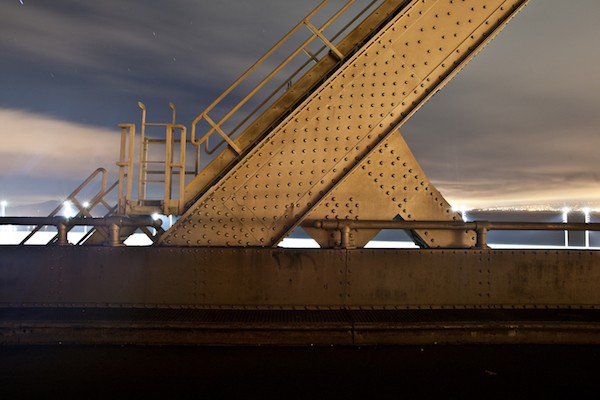 In 2013, just prior to the dismantling of the cantilever structure above Pier E3, I made a night-time journey to photograph the beauty and art in the old eastern span. I crawled up into the girders to photograph a bridge that is far from a quotidian means to an end, but something more transcendent: poetry, a spiritual relic, even somewhat alive. I’ve been exploring the deepest, tallest, and largest manmade structures in the U.S.—from Cold War missile sites, to the highest cranes in San Francisco, to manufacturing facilities for everything from paper to concrete for the past fifteen years. In the rivets of Old East I saw an inherent beauty; combined with the gusset plates, girders, and I-beams, now long gone, they were a vocabulary that many engineers could read like a verse of Shakespeare or passage of E.M. Forster.

And if we imagine engineers as poets, then cantilever bridges like the Eastern Span are the iambic pentameter of civil engineering—common and underappreciated, meant to have a lifespan in the centuries and withstand the heaviest weight loads and winds in the world. Though often denigrated for their erector-set appearance, cantilever spans have survived intact since the 1880s for a reason: None have collapsed due to natural causes.

In February of 1968, a military plane crashed into the cantilever section of the Bay Bridge’s eastern span in heavy fog, leaving only a few blackened and bent pieces of I-beam. Even the 1989 Loma Prieta Earthquake did not really provoke a “partial bridge collapse.” A deck at Pier E9 succumbed to the 7.1 temblor at an awkward connection between two truss decks—but the cantilever structure itself held strong.

Until its demolition, the Bay Bridge was the world’s most diverse, concentrated collection of bridge types. And it held the title as longest bridge in the world for decades. When the San Francisco Chronicle interviewed steelworker Al Zampa about his favorite bridge in 1986, he replied, “Bay Bridge. Jesus, look at her. Two suspensions end-to-end, six different kinds of bridges, 8 ¼ miles long, deepest piers in the world. We lost 24 men; we dangled up there like monkeys driving shot iron. No net. You fell, that was it. They thought we was all crazy.”

When it was complete, Old East had a spirit and life of its own, sometimes expanding and contracting up to 12 inches due to differences in temperature and load. “Have you ever been on the bridge?” Mooradian rhetorically asked the Berkeley historian. “It has a heartbeat. They all have a heartbeat. They’re all different. They all bounce and move in a different way, and that’s the heartbeat.”

The Bay Bridge was also the site of an improbably spiritual awakening that became part of the area’s intellectual history. In 1974, Gary Warne was climbing on the bridge when he had a revelation. “Once I was on the bridge I was greeted by moonlight on still waters and the skyline of the city diminutively reduced to scale on a plywood board, ready for display,” he wrote in his seminal essay “Carnival Cosmology.” “The bridge was obviously a jungle gym made to climb rather than drive over: The cars just using it for the in-between times. … It was then that I was first struck with the feeling that we were here to play, if nothing else, here to play with the world and other people.” That distinctly local exaltation of conscious play became the basis for Warne’s Suicide Club, which was an inspiration for the Cacophony Society and Burning Man, even though Warne himself died in 1983.

In fact, the bridge has been seen in spiritual terms since its opening on November 12, 1936. It was hoped that the bridge would not just join two great cities, East and West, but also unify “the hearts and goodwill of men.” The opening events lasted five full days, and they included 200 planes flying in perfect mass formation; fireworks releasing parachutes with American flags; President Roosevelt activating a switch to signal the procession; the release of a thousand pigeons. The governor of California cut a golden chain with an acetylene torch.

When the final scraps of steel exit the Bay, there will remain just a few pylons of the old causeway at a soon-to-be-created Gateway Park in Oakland. Parts of it—about 1 percent—will be reincarnated as park benches, lamp posts, bus shelters, gazebos, and other public art projects under an agreement with arts organizations in Oakland.

No doubt someday I’ll have feelings for the new bridge, but now it lacks the imprint of time and the memories and ownership that can only come through the rituals of working, reflecting, remembering, and playing. Mooradian knew how he would respond when asked about the new Eastern Span, “I don’t pay attention to it. I just don’t. It’s not mine. I have no thing with it yet.”