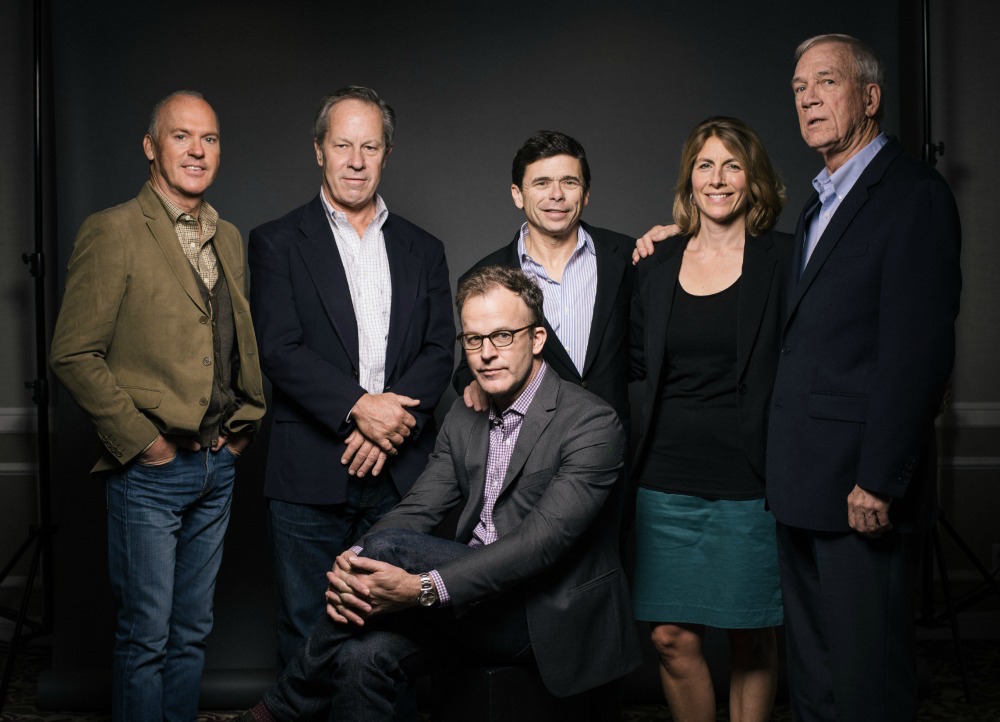 If your son is a priest and your daughter a journalist, Spotlight is a jarring movie.

There are journalists and lawyers aplenty in this recently released movie about The Boston Globe’s investigation of sexual abuse in the Catholic Church, but hardly any priests. I can recall just one, and he’s hard to forget.

He comes to the door when a reporter knocks, an old man with clear blue eyes and a mild, slightly befuddled face. He looks like the kind of guy who could wander into the middle of a busy street and never get hurt because someone would surely rush to his rescue, returning him to the curb with a gentle admonishment to be more careful in the future. He looks, in short, like someone to whom nothing bad could ever happen.

The reporter asks him about allegations that he molested children. “Sure, I fooled around,” he says in the friendliest of voices. “But I never felt gratified myself.”

I went to see Spotlight to cheer for the journalists. I’m a long-time journalist and journalism professor who raised a daughter who is an investigative reporter. Each summer, we attend the Investigative Reporters and Editors conference together, a rare mother-daughter team among throngs of hard-core and hard-drinking investigators. And each fall, I teach Arizona State University journalism majors about Ida Tarbell, Bob Woodward, Don Bolles, Seymour Hersh, and other scions of investigative reporting. I tell them there is nothing more noble or more important than exposing the wrongdoing of those in power.

But I’m also the mother of a Catholic priest. And that made Spotlight very difficult to watch indeed.

My son Patrick joined the Jesuit order of Catholic priests nearly 12 years ago, a decision that startled us then and still has the power to unsettle us now.

Both my husband and I were raised Catholic. We were married in the church and had our three children baptized Catholic, but when Patrick was 7, we left, as so many others have, unable to reconcile our personal beliefs with church teachings on everything from birth control to the role of women. We joined the Episcopal Church, whose rituals were reassuringly familiar but whose views seemed much more enlightened.

That might have been the end of it but for the Jesuits. When Patrick started his studies at Jesuit-run Creighton University in Omaha, he had never heard of the Jesuits, and at first he didn’t know what to think of them. Who were these men who seemed so worldly and so otherworldly at the same time? They could probe philosophy one minute and dissect basketball scores the next. They were deeply religious, but not in an in-your-face kind of way. And perhaps best of all for an idealistic young man, they were rebels and reformers: They wanted to change the world.

The risk, the radicalism of it all, appealed to Patrick. These were not men who settled for comfortable lives in suburbia. They lived zealously, with conviction and purpose. It made Patrick think of the Paul Simon song “Obvious Child” about a man who has chosen a conventional life filled with fun and money and even love, but finds no meaning in it.

“Who wants to be like everyone else?” he asked.

Since joining the Jesuits right after college, my son has been stretched in just about every way imaginable. For three years, he lived and worked on the Pine Ridge Indian Reservation, one of the poorest communities in the United States. He has been sent into one of the nation’s worst public housing projects, to a remote parish on the edge of a jungle in India, and to a women’s prison in San Francisco. In such places, he has tested the limits of what he can—and cannot—do.

I’m proud of my son and the work he does, but I’m cautious about telling people that he’s a priest. I’m afraid of the question I see in their eyes. “No, he’s not a child molester,” I want to tell them.

Still, I can’t really blame them for wondering. It is estimated that there were more than 10,000 victims of sexual abuse at the hands of Catholic priests around the world from 1950 to 2002. Thousands of broken promises; thousands of lives irrevocably damaged.

When I point out to Patrick the all-too-obvious flaws in the church, he agrees with me. The church is sinful, he says. It’s a human institution—so how could it not be? The church needs to change, he says, and if people like me abandon it, how will it ever change?

But why bother? I press. Why not start over with something else? Why not just do the best you can on your own?

But Patrick is offended by the notion of taking the easy way out, of not staying to fight for something better. He believes the Catholic Church, with all its failings, still offers the best option: a moral code built on emulating the way Jesus lived and seeking meaning beyond comfort and self-affirmation. Moreover, the church provides both the structure and a community to help us get there.

“People want a destiny,” Patrick insists. “They want to be called to something. Are we just going to do whatever we want as individuals? The answer has to be ‘No.’”

Whenever I get into these discussions with my son, I realize almost immediately that I’m in over my head. Does he just think about this stuff all day? I once asked him. “Actually, yes, I do,” he replied.

Pope Francis, the first Jesuit to lead the church, has made it somewhat easier for us tenuous Catholics to realign ourselves with the church. Opinion polls show the pope may be the most highly regarded public figure in the world. Even atheists say they like him. Suddenly, being Catholic doesn’t seem quite so shameful—or quite so hard to explain.

But not even Pope Francis can alter the past, something I kept thinking about as Spotlight came to a close. There’s an awful moment when the names of hundreds of cities scroll across the screen, every one of them places where priests have been found to have abused children. My husband and I sat slumped in our seats for long minutes after that stark and damning list had faded away.

Later, in the car, my husband and I agreed that Spotlight is a great movie—probably, as so many others have said, the best Hollywood depiction of journalism since All the President’s Men. It doesn’t glamorize journalism and it doesn’t go out of its way to demonize individual priests or exploit the stories of those who have been abused. That makes it, I think, even more devastating, especially for Catholics and those like me who have been feeling more hopeful about the church.

A few days before seeing the movie, my son called to talk about plans for Christmas vacation. He’ll be home for a week, and he wants to see a movie or two, something he doesn’t often get to do in his line of work. I told him we should go see Spotlight together, but now I’m hoping he has forgotten the suggestion. If it was hard for my husband and me to watch the movie, how much more so would it be for him?

I think we’ll all go to Star Wars instead.