My hometown of Leicester, like many English cities that aren’t named London, Liverpool, or Manchester, doesn’t get a lot of respect—or, to put it more bluntly, notice. As only the 11th largest city in England, it usually elicits a blank look, or shrug, from foreigners when mentioned.

Last year, we did have a moment of fame when the skeletal remains of Richard III, the last king of the House of York, whose defeat at Bosworth heralded the end of the Plantagenet dynasty and the dawn of the Tudors, were found in our own very city center. He was portrayed as a tyrant by Shakespeare, sure, and the remains were beneath a car park, but we’ll still take any royal association we can get. Also, did you know that Joseph “John” Merrick, aka “The Elephant Man,” was born and raised in Leicester?

But nothing has shattered the relative anonymity of my city like the improbable recent success of our Foxes, as the English Premier League’s Leicester City Football Club are known. We’re only midway through the season, but the fact that Leicester is a serious contender for the league championship is a story that has captured the imagination of sports fans around the world. If Leicester (currently in second place, after being at the top of the Premier League on Christmas) were to go on to win the title, it would arguably be the greatest David versus Goliath story since David actually slayed Goliath.

Surprises of this magnitude are not supposed to happen in English football, as stratified a society as you’ll ever know. Five or so big, rich clubs vie for all the trophies, and the rest of us merely strive to survive in the Premier League, the sport’s top league, and not be relegated to lower divisions. Seven years ago, Leicester was in the third division of English football, two rungs below the Premier League, and the club was almost dissolved due to its financial woes. Then it was rescued by new owners (the current owner is a billionaire Thai businessman). Meanwhile, four big clubs that spend more money on some of their individual stars than Leicester spends on its total roster—Manchester United, Chelsea, Manchester City, and Arsenal—have won the Premier League title every year but one since 1992, when the league was organized in its current form.

Our Foxes were only promoted to the Premier League, the world’s most followed domestic sports competition, 18 months ago, and were favored among many experts this year to return to the lower league at the end of this season (which is the fate that awaits the bottom three teams). 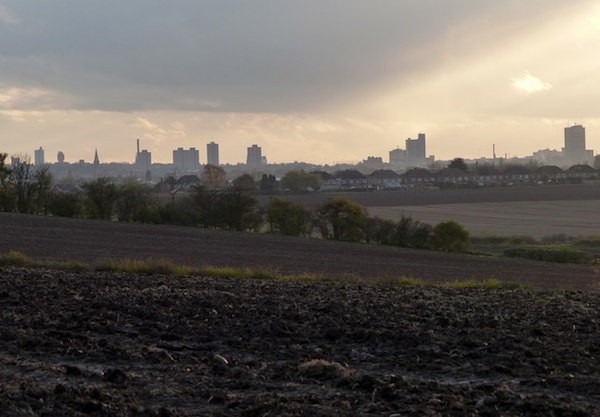 The Leicester skyline, a hundred miles from London.

Instead, as a result of the genius of our enigmatic Italian coach, Claudio Ranieri, and the goal-scoring marriage of strikers James Vardy and Riyad Mahrez, I find myself spending a lot of time being interviewed by fellow journalists and film crews from Japan, New Zealand, Australia, Germany, Austria, Switzerland, Turkey, Denmark, and the United States, all of whom suddenly want to know what the heck is Leicester City. Sometimes I even slip in the Elephant Man.

I can understand why the entire world seems to be rooting on our foxes, because if Leicester City can win the Premier League, anything is possible. But I should also make clear that we Leicestrians have loved this team long before their success, and will continue to do so long after the inexorable brutality of market forces reassert themselves and put us back in our place.

You can’t walk the streets in our city center without seeing at least one fan sporting the club’s blue jersey, but that was true even in losing seasons. Likewise, the Louis Armstrong tune “When You’re Smiling” was already the club’s anthem, belted out by the “Blue Army” of fans during games, long before we actually had much to smile about. There’s a long-running local joke that went like this: Police are appealing for witnesses after burglars broke into Filbert Street’s (the club’s former home) trophy room and emptied it of its entire contents. They are looking for two men who carried away the royal blue carpet.

There hasn’t been a dull moment since I started covering Leicester for the Mercury newspaper eight years ago. I have seen grown men weeping like babies when the team failed in previous years to ascend into the Premier League, and I still cherish the sight of thousands of fans gathering outside the town hall, waving a sea of blue flags, as the players celebrated promotion to the Premier League. Nothing brings a community together in England quite like a football club. 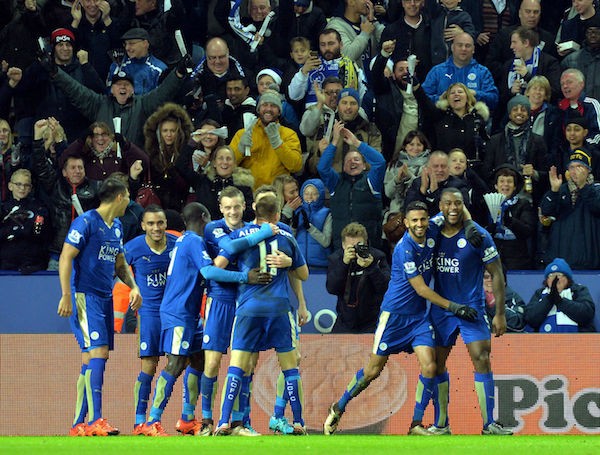 One of this season’s most enchanting subplots for us football romantics is the tale of the striker Vardy, a 29-year-old who smashed through the record of scoring a goal in consecutive games last fall. Leicester picked him up three years ago from Fleetwood Town, paying a record £1 million for a striker from non-league. He gave up football for three years after being released as a teenager by his home-city club Sheffield Wednesday. Friends talked him into playing pub football as a means of getting him back into the game, and he slowly worked his way through the non-league divisions. Vardy worked in a factory making prosthetics while playing part time. For a season, he even had to be substituted early in games so he would not break a court-ordered curfew after being convicted of assault when he stood up for a deaf friend who was being picked upon in a pub. There would literally be a car waiting, engine running, by the side of the pitch so he could leap across the barrier and make his getaway before the game was over.

Vardy is now the joint leading goalscorer in the Premier League, and a new member of England’s national team.

Then there is Mahrez, a young Frenchman of Algerian descent whom City signed for just £400,000 two years ago—peanuts in the modern game. Now, he’s one of the most sought-after players in Europe, with an estimated value of £30 million.

In fact, when you look at the City squad, they are all players with a back story, players who have been told at one time or another they weren’t good enough, big enough, fast enough, and who are all now driven to succeed, to prove people wrong.

Theirs is the hunger of the underdog who seeks respect, or at least some notice.