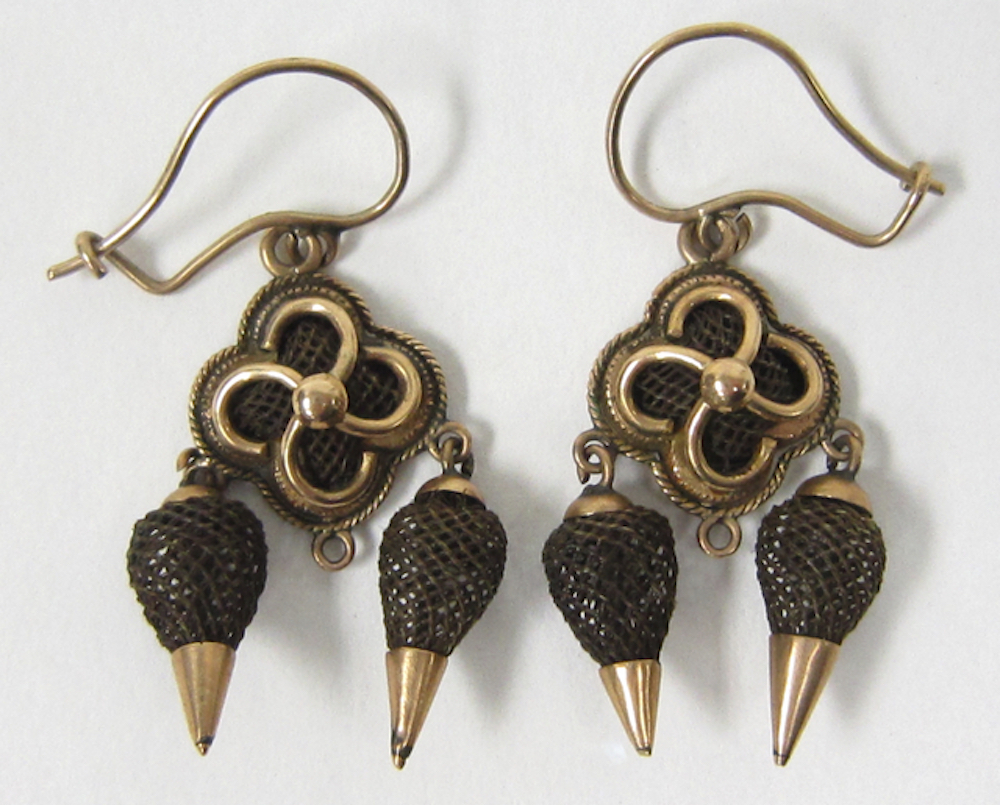 In 2016, Americans will spend more than $18 billion on Valentine’s Day, according to the National Retail Federation. We’ll show our love and affection by buying heart-shaped chocolate boxes, sparkling wine, flowers, cards, and jewelry. Nowhere on the list is hair.

Imagine getting a keepsake made of hair from someone’s head! It would seem morbid. But through the 1800s, Americans showed their feelings with hair. At home, hair was sewn into notebooks, put under glass in lockets, and sent through the mail to loved ones. A large industry for hair products produced earrings, bracelets, necklaces, and wall decorations. While the Valentine’s industry seems recent, Americans have always mixed retail and sincerity; shopping and emotional relationships.

I saw my first piece of hairwork when I was 16 at an antiques show at the Crossroads Mall in Omaha, Nebraska. Amongst the postcards and other junk, I found a large button with a woven front of brownish fabric. Though the vendor assured me that the “fabric” wasn’t hair, I bought it for 25 cents and later decided it had to be hair. It was creepy and yet I kept thinking about the loving gesture of the hair enclosed by the metal frame of the button’s edge. When I was getting my doctorate in history, my thoughts returned to that oddly compelling button as I tried to understand how 19th-century Americans used both handmade and commercial objects to define themselves, their memories and relationships, and even death and life. And so I began to study hair art.

These days if you want to feel close to a loved one who’s far away you’re likely to look at a photograph, or even to browse their Facebook or Instagram account. But in earlier times, you might have looked at hair. In 1828, a few days after Valentine’s Day, Walter Mason Oddie, a landscape painter, was at his desk musing about the love of his life, his wife Julia. He unfolded a small scrap of paper to gaze upon a lock of her hair. Three years earlier he had married his Julia, Walter wrote in his diary book, and she was “the constant object of my thoughts [who] has remained an inmate of my bosom – Time has no effect upon my affection.” After that reflection, Walter carefully folded the piece of paper and slid it back into a symbolic bed—an envelope marked “Julia’s March 1824.” It was a home for the hair and a memory for his heart. Possessing someone’s hair was a deeply sentimental way to possess that person.

Hair could soften even the hardest of hearts in the most hard-bitten of men. In 1870, Adelbert Ames, a 35-year-old former U.S. general in the Union Army and a Senator from Reconstruction-era Mississippi—not exactly a softie—met Blanche Butler from Massachusetts. Soon after they met they were engaged and Blanche sent him a locket with her photograph and her hair. She teased: “I am now debating in my own mind the propriety of putting a lock of hair opposite the picture.” Adelbert swooned as only a well-tested fighter of a man could do: “Dear Blanche, I was very glad, happy, to receive your beautiful token—not beautiful, that is secondary—it was dear and precious. Your sweet face and a lock of your beautiful hair. Your hair seemed to bring you very near me. I thank you, Love, for the locket, the picture, and the hair. I shall always wear them.”

For Adelbert and Walter, the hair was much better than a “likeness” or a photograph. Hair was a living part of the person: Its color did not noticeably fade over time; the texture and feel remained the same as it did on the head of the person; and whether the person was living or dead, their memory resided in the lock of hair. Photographic images distorted appearances. Hair wasn’t just symbolic of the person, it was the person—their body, their living material. It was a far more potent carrier of memory than a photograph which only revealed the appearance of a loved one; hair physically brought that person close.

Hairwork in the 19th century could be as simple as Walter’s lock of hair or Blanche’s hair nestled in a locket on Adelbert’s watch chain. It could also be much more ornate, and more about friendship and family than romantic love. Hairwork was often made-to-order by jewelers and the ornate pieces were often worn with a customer’s best outfit. Hairwork could be finely woven beads on a necklace, or bracelets of flat-braided and woven hair to be worn against the skin. Hair was made into wreaths that hung in parlors, into three-dimensional bouquets of ornately knotted hair flowers and leaves kept under glass cloches. Catalogs offered page after page of the same designs, across the country.

This wasn’t a curious gothic-inspired affectation at the time; wearing hair jewelry or displaying hairwork in one’s parlor was to exhibit the best taste in fashion and sentiment. What’s more, it demonstrated that the owner was woven into a web of friends and family and dear ones, displayed in her ears or on a parlor table.

Hairwork was also a perfect consumer product that worked with Americans’ rapidly innovating retail culture. Deeply personalized in material, manufacture, and meaning, it was also generically respected and understood. It was a material so innately personal that the market couldn’t besmirch its sincerity. American fiction, short stories in women’s magazines, the advertisements for the jewelry all assured potential customers that hairwork, while mainstream, was about one’s private sentiment. But that hairwork was likely made in large workshop factories, such as the National Artistic Hair Work Company in Chicago. This balance of the personal and the corporate is as familiar to us as the use of Facebook to share life’s deepest experiences.

But in the 20th century, its meaning began to change. By the 1920s, jewelry wholesalers were selling ready-made hairwork (so who knew whose hair it was made of!) but many saw hairwork as a moldering relic of the Victorian age. It fell out of favor because clothing styles went towards lighter colors and fabrics, and decoration in houses emphasized clean lines. More importantly, the way we showed sincerity changed. In hairwork’s heyday, sincerity was a sentimental expression of honestly held emotions; by the 1920s, effusive displays of emotion seemed overwrought and the ornate lines of hairwork fussy and disingenuous.

Today, we strive to be restrained in our emotional displays—but some things haven’t changed. Jewelers sell upscale “personalized” beads and charms to represent one’s children or family. At my local grocery store in Ohio, the checkers wear rows of Badge-A-Minit pin buttons emblazoned with a daughter’s basketball team photo or a grandchild’s kindergarten portrait. As I interact with them, I know they are in a web of relationships—they love and they are loved by many.

We are still searching for ways to represent relationships that are not about work or the market—the most intimate connections we share with others we want memorialized in an object we can hold, store away, and go back to again and again. We want to buy a way to stop time, to remember the “real” person we love. Walter folded his Julia’s hair back up in its paper bed, and Blanche’s locket still exists attached to Adelbert’s watch chain. Time, as Walter said, has had little effect on affections.