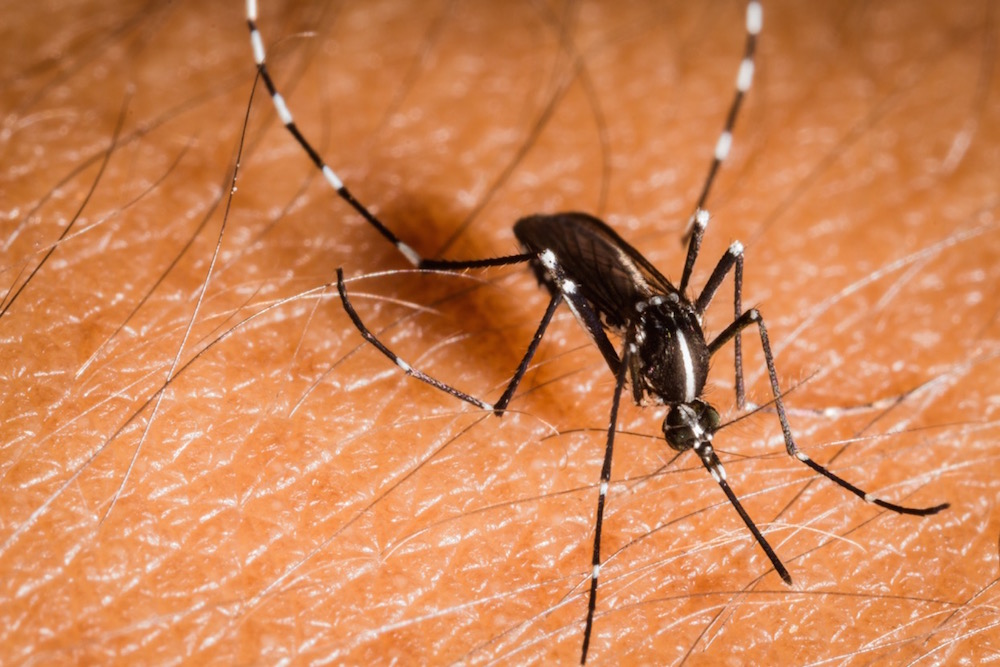 “We need you to come take a look at something.” Ecologist Angela Brisco and technician Marc Mitchell, employees of the San Gabriel Valley Mosquito and Vector Control District, peered over the short wall of my cubicle. Whenever our staff neglected to use my “front door,” I knew something was wrong.

They showed me a single female mosquito under the microscope. It didn’t look good: I focused up and down, trying desperately to make the black and white stripes on her legs and the white “ax mark” on her thorax disappear.

“Where did you find her?” I asked.

“El Monte,” Marc said sadly. “A woman complained about being bitten during the day by mosquitoes, and I caught this one at her home.”

It was September 2, 2011. We thought Aedes albopictus had been eradicated from Los Angeles for 10 years, but these nasty vectors were back—and we were about to learn a hard lesson about the difficulty of controlling them. These days, controlling mosquitoes in North America is part of a larger Faustian bargain: We are free to travel and shop around the world, but without geographic barriers, exotic pests and viruses invade our shores. How can we be vigilant about these risks, without losing our minds about every foreign-sounding bug and virus?

Aedes albopictus (“albos” for short) is a mosquito that keeps vector control officers up at night, especially with the attention mosquito-borne Zika virus is garnering as it moves through Brazil, Latin America, and the Caribbean. Mosquitoes of the genus Aedes, including “albos,” are the ones in the U.S. capable of transmitting chikungunya, dengue, and Zika virus, all of which cause serious human diseases.

Worse, these black-striped mosquitoes are not shy about their love for humans: They prefer feeding on us and bite relentlessly during the day, enhancing the risk that they will spread viruses like Zika from the infected to the uninfected.

Finally, “albos” are difficult to control because they need only the tiniest amount of water—as little as a bottle cap full or a space between the leaf and stem of a plant—and their eggs survive a drought for a year or more.

California has been organizing programs to control mosquitoes for about 110 years, since 1909. Early programs fought malaria and in the 1940s and ’50s, the state formed many mosquito abatement districts when Western equine encephalomyelitis and St. Louis encephalitis viruses sickened hundreds of people and killed thousands of horses in the Central Valley. Since 2004, vector control agencies have waged a continuous battle against West Nile virus.

In 2001, Aedes albopictus, the “Asian tiger mosquito” arrived in California as a stowaway that arrived in shipments of popular plants marketed as “lucky bamboo.” The shipments were mostly from southern China; stalks of the plants were placed in tubs of water and sent off by the container load. Their voyage across the Pacific was the perfect pleasure cruise for an invading insect. Before shipping, the containers sat open on the docks, and mosquitoes laid eggs in the tubs. The crossing allowed these eggs to hatch, and adult mosquitoes that were trapped when container doors were shut laid more eggs. When the containers were opened upon arrival, adult mosquitoes escaped, and the eggs were transported to “lucky bamboo” distribution centers.

Getting rid of that infestation took a massive effort by multiple agencies—the University of California, the state’s Department of Public Health, and members of California’s Mosquito and Vector Control Association were all involved. Regulations were enacted to ensure “lucky bamboo” was no longer shipped in standing water. For the next three years, no one found Aedes albopictus. We Californians were proud of being the first state to eradicate a large infestation these mosquitoes.

We surmised that southern California’s climate was too inhospitable for Aedes albopictus to easily gain a foothold, and the pressure we exerted on them caused their demise.

We were very wrong.

The genetics of the mosquitoes we collected in 2011 most closely resembled those from south China, where the infestation in 2001 originated. Somehow, Aedes albopictus had lived under the radar here in Southern California for a decade. Surveillance to detect small populations of these mosquitoes is difficult, so by the time we found them in 2011, they had infested a large area.

Because of our relative success in 2001, we started fighting 2011’s infestation brimming with confidence. Along with our colleagues from the Greater Los Angeles County Vector Control District, we worked in a furious effort to determine the outer limit of the infestation, remove sources of water, educate residents, and eradicate any mosquitoes that we found. Initially, our hopes were buoyed when the mosquitoes seemed to disappear as the days shortened and the weather cooled in November 2011. We looked forward to wiping out a few remaining pockets in the spring of 2012.

Famous last words. When spring came, “albos” emerged with a vengeance. Although we tried everything, Aedes albopictus doubled its range every year after that. We expect to find them in each of the 24 cities in our jurisdiction by the end of 2016. The drought that continues to plague southern California will have little effect on Aedes albopictus; they hardly need any water to develop, and even without water, their eggs will remain poised for months, waiting for the next rain to fall.

Towards the end of 2014, the fight against Aedes albopictus in Los Angeles County took an ominous turn when Aedes aegypti was discovered in the City of Commerce. Now, two of the world’s most infamous vectors were present in the county. Aedes aegypti’s common name, the “yellow fever mosquito” says it all. Its biology is similar to Aedes albopictus, but Aedes aegypti is considered the most versatile vector of all when it comes to transmitting human diseases.

To make matters worse, Aedes aegypti had also been found in several counties in the Central Valley, and in San Mateo County. 2015 was a banner year for both species of Aedes. By its end, Aedes aegypti or albopictus could be found in 12 counties and 76 cities in California. The possibility that chikungunya, dengue, and Zika viruses could be transmitted locally became reality for a good portion of the state. Of course, while there still are just pockets of these mosquitoes in California and other parts of the southwest, Aedes mosquitoes have made themselves quite at home in the southeastern U.S., with a range that goes out as far north as Connecticut and the Midwest, and much of Texas.

These days, controlling mosquitoes in North America is part of a larger Faustian bargain: We are free to travel and shop around the world, but without geographic barriers, exotic pests and viruses invade our shores.

Still, it’s not likely that a widespread epidemic like Zika in the Caribbean, Central, and South America will occur in the U.S. The viruses are not transmitted when Aedes aegypti and Aedes albopictus stop biting during winter, and the viruses cannot live in hosts other than humans. This means chikungunya, dengue, and Zika viruses must be introduced to mosquitoes each year by infected humans.

Even though the Zika virus, which is associated with severe brain damage in babies born to infected mothers, is getting all of the attention, the mosquito-borne virus that we should really worry about is the deadly West Nile virus. Unlike Zika, West Nile virus lives primarily in birds and is continuously present, ready to infect humans. Last year there were 299 cases in Los Angeles County and 22 deaths. These numbers are high—especially for a disease that doesn’t get much press anymore—but there may really have been as many as 7,000 cases of West Nile in Los Angeles alone last year, based on statistics from 2015 and the CDC’s estimates of symptomatic illness. What will happen with West Nile virus in 2016 is not certain, but the prospect of dealing with an epidemic caused by that virus along with local outbreaks of chikungunya, dengue, or Zika greatly concerns all of us at vector control agencies.

Our biggest challenge will be getting Californians to change their behavior. No agency’s budget is sufficiently large to hire enough workers to get into everyone’s backyard. We must motivate residents to remove all the sources of water on their property that may produce mosquitoes.

This time, we might just get lucky. Californians are not used to mosquitoes, and the ferocious daytime bites of Aedes aegypti and Aedes albopictus will interrupt our famous outdoor lifestyle—making people uncomfortable enough to take action. In a state with a vector control system designed to protect public health, it’s ironic that the mosquitoes themselves, not the diseases they transmit, may deliver a more powerful message than any public information campaign.