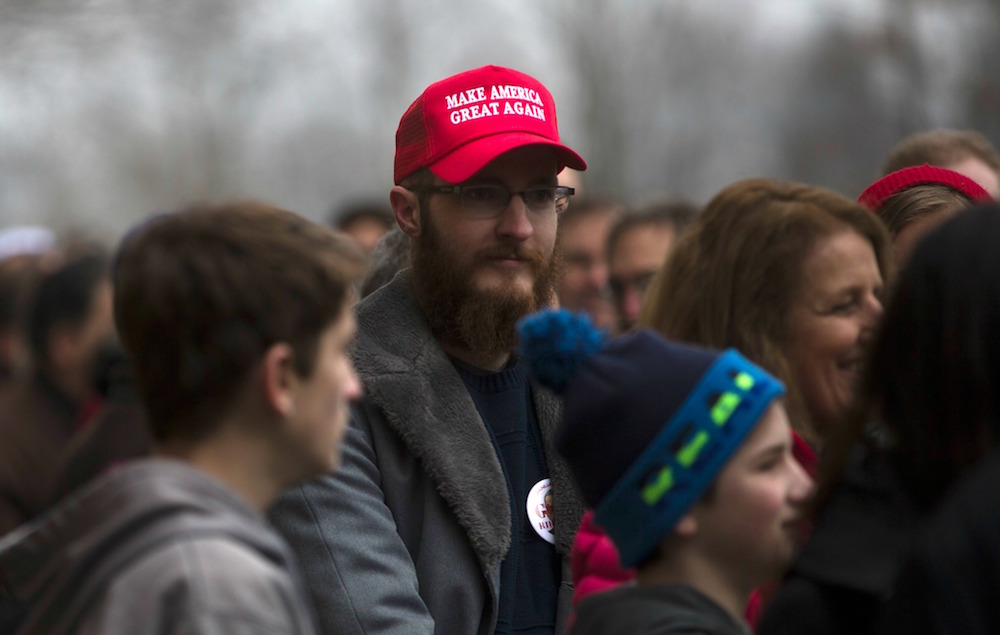 The answer in the presidential campaign is a resounding “Hell no!” And, surprisingly, there seems to be bipartisan consensus on this misguided assessment. (Spoiler alert: America still rocks.)

On the Republican side, the ostensibly self-financed frontrunner is raising a lot of money selling caps with his signature call to “Make America Great Again.” For Donald Trump, America’s former greatness was traded away by a series of “loser” politicians hoodwinked and outsmarted by those crafty Mexicans, Chinese, and Japanese, not to mention the terrorists out there eager to destroy us, and their politically correct apologists.

None of his fellow Republican competitors push back with Reaganesque optimism—they’re all eager to match Trump’s anger and grim outlook, which they can blame on Barack Obama. Senator Marco Rubio accuses the president of destroying the military; Senator Ted Cruz talks of the Constitution as if it is now some banned relic from our suppressed past; Dr. Ben Carson has compared the U.S. to a patient in critical condition; and Governor Jeb Bush talks of the present course as “unsustainable.” All the Republicans talk about the nation’s moral fiber and social indices in apocalyptic terms.

On the Democratic side, the country is also going to hell, though in the Sanders-Clinton narrative the culprits are different: Wall Street banks, those heartless one-percent rich folk, and their enablers in the Republican Senate and the Supreme Court (may one of them rest in peace).

For Senator Bernie Sanders, things are so bad we need a revolution. You’d expect nothing less from a socialist, but that makes former Secretary of State Hillary Clinton the most intriguing doomsayer in the race. If anyone should be the candidate out there pointing out that the sky isn’t falling, advocating for some continuity for the Obama record, it’s his former cabinet member.

And yet Clinton feels so much peer pressure to match the Trump-Sanders populist anger that she is finding it hard to come up with a coherent narrative. She says nice things about President Obama, but doesn’t make a full-throated defense of his record or the direction the country is headed in. She defers to the consensus among the other candidates that the rest of the world is a very scary place, posing far more threats than opportunities.

Hence her disavowal of the landmark free trade agreement with Asia that she championed when she was in the administration, the type of grand policy proposal for international engagement that presidents confident in America’s competitiveness typically advance.

Clinton feels so compromised by her previous internationalist outlook, corporate backing, and her ties to Wall Street that she barely speaks up for her husband’s own record in the ’90s. Bill Clinton’s embrace of free trade, welfare reform, crackdown on crime, and deregulation of the financial industry are so out of favor now with Democratic activists that the former first lady is left to talk vaguely about her husband’s success in office while distancing herself from all his administration’s particulars. The last presidential candidate who had such a conflicted and unnatural relationship with Bill Clinton’s legacy was Al Gore, who stubbornly refused to run a more positive campaign in 2000, coming across instead like an angry Democrat circa 2016.

How much does the fear-mongering of the candidates distort our picture of the world? As an exercise, I went through transcripts of the two Republican and the two Democratic debates leading up to the New Hampshire primary, and found that the most frequently mentioned foreign entity was not a formal country, but ISIS, and its caliphate, with 98 mentions by all candidates.

Iran was mentioned 59 times; North Korea, 41; China, 27; Russia, 24; European Union, 15; Mexico, 7; anywhere in Africa that isn’t Libya or Benghazi, 5. And India, the second most populous country on earth? It wasn’t mentioned once.

This is the world of campaign land—a scary place dominated by ISIS, Iran, and North Korea, where Mexico and the EU are occasionally brought up when discussion turns to dodgy migrants. No candidate is talking optimistically about the need for American leadership and the fact that our interests are aligned with the rise of the global middle class, one of the more transformative issues of our time.

There is a deep irony in all this talk of American decline and of a zero-sum world in which our nation’s losses are someone else’s gain: The rest of the world enviously looks upon the United States as a formidable winner these days. Yes, these are uncertain economic times, but that’s largely because things are looking dicey in so many other places, and the world economy has become so interconnected.

It’s absurd for anyone to keep talking about China eating our lunch, given the meltdown of that country’s stock market, and serious doubts over the communist leadership’s ability to continue delivering the growth that will preserve political stability. Japan can’t ever seem to emerge from its stagnation; the EU is mired in a state of permanent crisis; and commodity-exporting emerging markets all over the world are in deep trouble. Even oil-rich nations, among them several U.S. geopolitical adversaries, are crashing hard.

The rest of the world can only look on with envy at America’s steady growth in recent years, and an unemployment rate brought back down to 5 percent after 71 consecutive months of job growth. No country can come close to challenging our military strength, which we can afford without taking on too much debt. America can set the rules of the financial game for the entire world, thanks to our control of the global reserve currency. If anything, our dominance—over global culture, transformational information technologies innovation, research, and higher education—is only making itself more pronounced.

Donald Trump is obsessed with polls, so he should realize that international currency and bond markets are the most meaningful polls to assess how things are going. People around the world are voting American with their money, rushing to buy U.S. dollars and Treasury bills. The narrative that we have become losers outsmarted by others doesn’t square with financial poll numbers: The value of the U.S. dollar keeps surging, and our cost of borrowing keeps falling.

Everyone is betting on America, except the people campaigning to lead her.