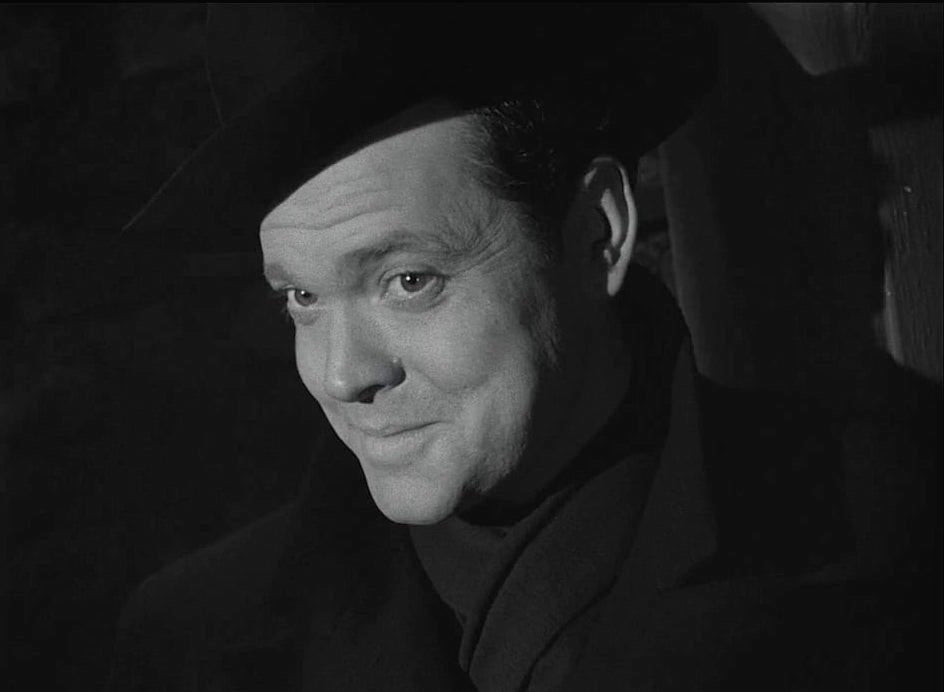 For most of The Third Man, the classic 1949 film noir, its biggest star makes only fleeting appearances on the screen. Cast as a racketeer in post-World War II Vienna, Orson Welles is usually on the run, dodging the police and various criminal rivals as he haunts the shadowy ruins of the old imperial capital. A slow ride on the city’s renowned Ferris wheel provides one of the few moments when his character is allowed to linger in the same spot. Set inside an enclosed compartment swaying on the giant wheel, the scene ends with Orson winning a little sympathy for devils like the thoroughly unscrupulous character he plays, Harry Lime.

In the now famous speech that the actor wrote himself, evil gets some credit for the good it sometimes spreads in its wake. Take Italy under the evil Borgias, says Welles as Harry Lime. They gave us the Renaissance. But the Swiss—“They had brotherly love, 500 years of democracy, and peace, and what did they produce? The cuckoo clock.”

It’s hard to imagine anyone saying “cuckoo clock” with more impudent disdain than Welles. And it’s equally hard to think of The Third Man enjoying its cult status without Orson enlivening its rambling plot with his wit and charm. How lucky we are that one of the film’s producers—David O. Selznick—failed in his strange bid to cast the playwright Noël Coward as Harry Lime. That refined Englishman could never have captured the air of buoyant brutality that the American Welles brings to the part.

Why does film noir still have a large following today? Because we love moral ambiguity even more than audiences did in the middle of the last century, when everyone desperately needed an escape from wars and depressions. Though its themes have been played out in countless modern dramas, The Third Man has lost none of its dark appeal. Those gorgeously filmed bleak streets of Vienna still seem exotic and dangerously alluring. The cast is superior, Graham Greene’s script is full of great lines, and director Carol Reed’s eye for black-and-white magic is impeccable. But none of it would work even half as well without Orson.

Still robust and handsome in the late 1940s, and only recently divorced from one of the most beautiful women in the world—Rita Hayworth—Welles was the perfect choice to embody Graham Greene’s vision of an unapologetic anti-hero. For most of his long literary career, Greene was fascinated with the borderline between good and evil, and he found in the alien world of bombed-out, occupied Vienna a setting so grandly sinister that it demanded a resident devil like Harry Lime, a man exquisitely at home in the pervasive gloom.

On the pages of Greene’s script—and even more so in the book version of The Third Man—Harry’s character lacks the softer edge of evil that Welles gives it. And thanks largely to the actor’s manner of casual immorality—his easy shrugs of indifference toward rules and laws—Harry comes to dominate the film even when he’s not in the frame.

It seems to take forever for Greene and Reed to bring Welles into the picture, but when he does appear, it’s one of the greatest entrances in film history. With someone like Noël Coward hiding in a darkened doorway, Harry Lime’s delayed emergence from the shadows would have seemed a cheap trick borrowed from some other film. But when a sudden light from a window illuminates Welles’s profile in the doorway, he doesn’t look in the least alarmed or even annoyed. He looks at ease, a man confident that he can return to the darkness whenever he pleases. Though dressed all in black, he quickly dispels any notion that he is a stock villain by allowing a coy smile to play across his lips, disarming us with an expression of innocent self-satisfaction.

Guilty of selling tainted penicillin on the black market, Harry Lime is a dangerous man, but the more he becomes a hunted man, the more we are drawn into sympathy with him. There are lots of hunted villains in Greene’s work, but only the film character of Harry becomes truly sympathetic, and for this Welles must share some of the credit with Reed. As we follow the long last chase of the anti-hero in the cavernous sewers of Vienna, Reed’s camera does everything to make us identify with Harry.

Using quick cuts, the director makes it seem as if an enormous army of policemen is pursuing Lime, closing in on him from every direction. Against such odds, his desperate escape attempt looks valiant. He may be doomed to die in the underworld of the sewers, but the irony is that the hellish maze below ground looks tidier and grander than the bombed city overhead. Faceless in their uniforms, the police and soldiers who chase him seem less human and more brutal than the man they hunt. By the end of the film, the dividing line between the forces of order and disorder narrows to the point where it’s hard to tell them apart.

All of which leads back to a brilliant touch to the story that Greene alone created. When Harry goes up in that Ferris wheel earlier in the film, he looks down at the people far below and asks his gullible friend Martins (played by Joseph Cotten) whether he would really care if any of the human “dots” on the ground were destroyed. For a bounty of 20,000 pounds (about $100,000 at the time), Harry thinks that anyone would be willing to eliminate at least one dot. The proposal may seem monstrously callous, but the ruins of Vienna—omnipresent in the film—serve to remind us that the “good” airmen of the Allied forces destroyed countless dots in the bombing campaign of World War II and received medals for doing so.

This kind of moral equivocation is now a constant in our world of terrorist outrages, drone attacks, and air raids on innocent civilians who are written off as “collateral damage.” The “good guys” in our conflicts have never been harder to find. And nothing can explain more vividly how we came to this sad state of affairs than The Third Man. It was made almost 70 years ago, and Vienna has been rebuilt to much of its former splendor. But perhaps its shadowy world of confused prey and ruthless predators is now closer to ours than to Greene’s.