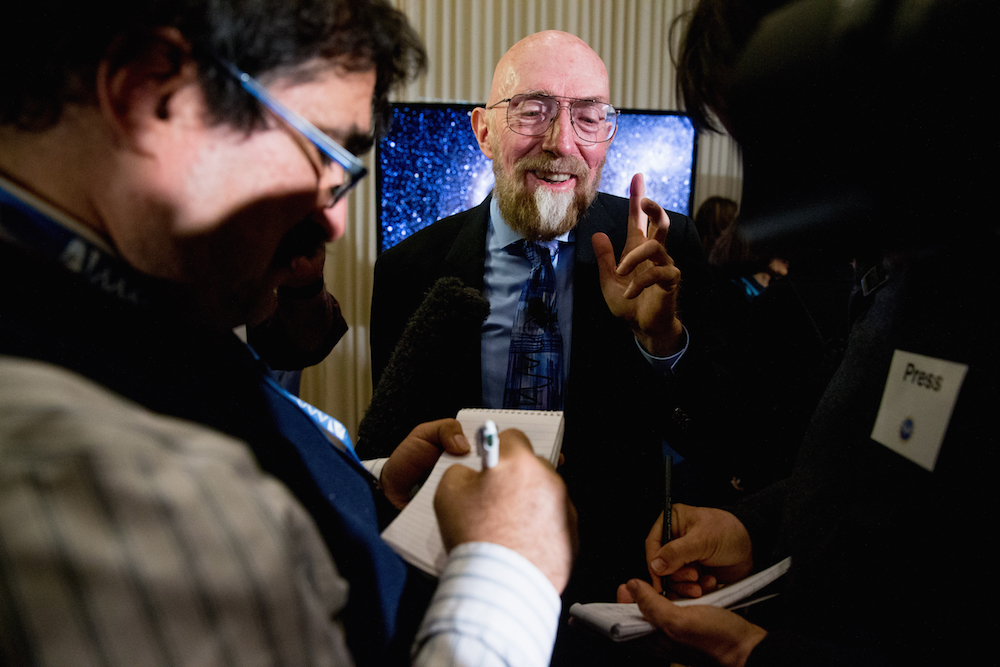 Laser Interferometer Gravitational-Wave Observatory (LIGO) Co-Founder Kip Thorne speaks to members of the media following a news conference at the National Press Club in Washington, Thursday, Feb. 11, 2016, as it is announced that scientists they have finally detected gravitational waves, the ripples in the fabric of space-time that Einstein predicted a century ago. The announcement has electrified the world of astronomy, and some have likened the breakthrough to the moment Galileo took up a telescope to look at the planets. (AP Photo/Andrew Harnik)

Like nearly every other physicist in the world last week, I was glued to my computer screen watching the recent press conference jointly called by the Laser Interferometer Gravitational-Wave Observatory (LIGO) and the National Science Foundation. We’d all heard chatter, of course, that a grad student last fall had seen a “whopping big signal” that was nearly too good to be true. But none of that anticipation could compare to the way I felt upon hearing the historic words at the press conference:

“Ladies and gentlemen, we have detected gravitational waves. We did it.”

Gravitational waves are related to the gravity we’re all familiar with in our everyday lives. We all know that if we let go of an object we carry, it will drop, or that we’ll fall on our faces if we trip on the sidewalk while texting on our smartphones. But gravity at the scale of planets, solar systems, and even universes is a little harder to wrap our brains around.

Back in 1915, Albert Einstein proposed a way of thinking about the way gravity works at such large scales, what we call the Theory of General Relativity. One of the biggest contributions of General Relativity is the idea of a gravitational wave. Think back to our reckless texter on the sidewalk, and imagine that instead of walking on concrete, he is walking across the surface of a lake. Every step would create ripples around his foot, and other passers-by would similarly create ripples as they walked. When two walkers collided on the surface of that lake, however, their subsequent fall would create a much bigger set of ripples that other people on the lake would be able to see and feel, even if they might not be able to see the triggering collision itself.

Now, replace those people with black holes, their collision with something called a binary black hole merger, and the surface of the lake with a geometric description of space called “space-time,” and you’ve got the event that created the wave LIGO detected last fall.

Ever since Einstein proposed them, gravitational waves were a bit like General Relativity’s white whale—the elusive lynchpin for the whole theory, without which Einstein’s entire theory of gravity doesn’t quite add up. If Einstein was wrong, a significant portion of the astrophysics work done since the publication of his theory would have had to go straight in the dustbin, setting our understanding of gravity back nearly a century.

But allow me to be more parochial here. What made that press conference really special for me was that the likely historic signal looked exactly like something that I had modeled hundreds of times in computer simulations—a shape I was intimately familiar with.

I take these waves personally. Before I joined Arizona State University as a graduate student studying science policy, I was an undergrad at Oberlin College working on my degree in astrophysics. I was able to study gravitational waves for nearly my entire career as an Obie, drawn into efforts to try to hunt down the elusive signs of gravitational waves. The first was an international collaboration trying to create a network of precisely timed signals emitted from super dense, spinning neutron stars called pulsars—the idea was that if we timed these pulsar signals precisely enough, we would notice if a signal took longer to reach us than usual because a gravitational wave had slowed it down.

The other large-scale effort to detect gravitational waves, LIGO, uses something called an interferometer, which looks like a right angle, made out of precisely phase calibrated lasers. With that experiment, we could theoretically tell if a gravitational wave passed “through” the interferometer if one laser went out of phase with the other; since we’re talking about ripples in the fabric of space-time, a wave would cause all space-time on its path to stretch and shrink, including the arms of the interferometer itself. LIGO built two interferometers (one in Hanford, Washington and one in Livingston, Louisiana) for potentially the world’s biggest insurance policy—if both interferometers detected the same wave, we’d know it wasn’t a fluke.

It’s very hard to detect gravitational waves because we’ve never before had equipment sensitive or sophisticated enough, and waves big enough to detect from our corner of the universe don’t happen every day. There were hints two years ago that scientists might have detected gravitational waves emanating from the explosion that created the early universe; but those were indirect measurements, inferred from the polarization of radiation from the cosmic microwave background. Unfortunately, those results were later withdrawn as misinterpretation of patterns in cosmic dust.

So when Gabriela Gonzalez, the spokeswoman of LIGO, put up the two signals that LIGO’s Hanford and Livingston detectors had recorded side by side, I cried. I cried because I’d seen that waveform emerge before in the simulations of black hole collisions that I’d run years ago at Oberlin. It was as though an old friend had knocked on my door, one I never thought I’d see again.

This discovery has massive implications for the future of humanity’s exploration of our universe. It may, for example, now be possible in the next few years to detect gravitational waves from the Big Bang (thought to have occurred 13.7 billion years ago), either confirming or disproving the prevailing theory of the origin of the known universe. Quantum gravity, a field of research dedicated to describing gravity at the level of quantum mechanics, may now be able to take unprecedented leaps forward towards a unified “Theory of Everything.” And our level of sophistication with technical instrumentation has only just opened the doors to the next era of astronomy, in which we can start to ask questions about our universe that we’ve yet to even imagine.

We waved at the universe, and it waved back in our lifetimes, in a way that we could recognize. The odds of that happening were, well, astronomical.