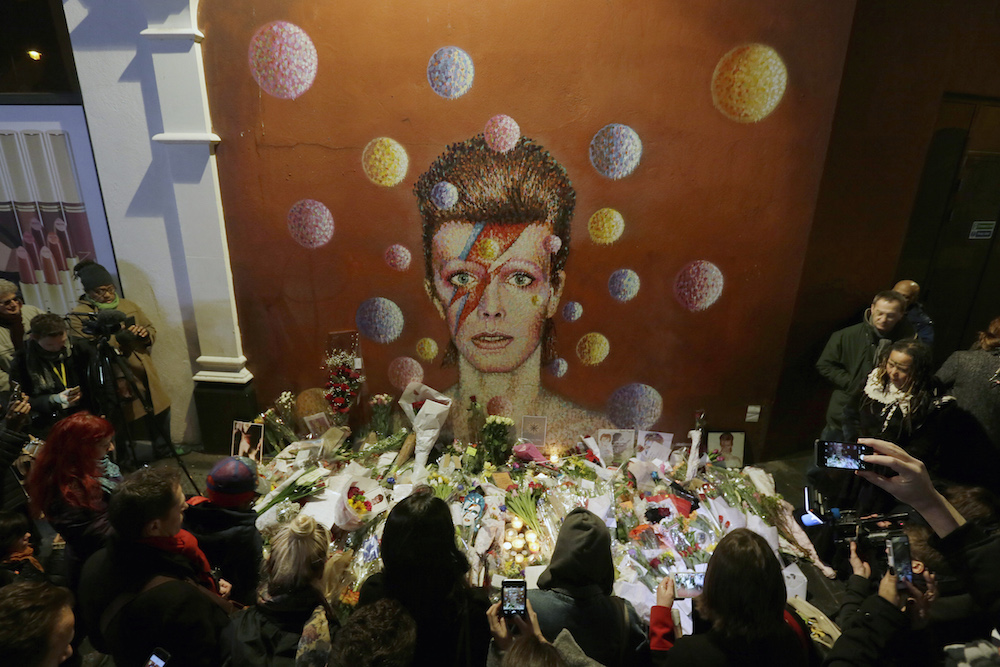 After Prince died my Facebook news feed filled with mourning. My friends shared the time he sang “Starfish and Coffee” with the Muppets, told stories of going to concerts at the Oakland Coliseum and Mohegan Sun Casino and explained in detail how much he meant to them. For a week, San Francisco and Los Angeles city halls got lit up in violet. I teach ancient Greek literature and culture at the University of Colorado, Boulder, and this struck me as both strange and familiar. I sometimes feel closer to the ways of the ancient Greeks than to modern Americans. Yet as I looked at my Facebook feed, I was seeing Greek in all the purple.

Traditionally Americans haven’t mourned in public. Funerals here tend to be private affairs—an interior scene at a funeral home, a few family and friends, some flowers. Big politicians may have public funerals, but most funerals—even for celebrities—are closed. Traditionally, too, we let the dead be dead: We may speak in whispers at the wake, but we don’t speak of the dead as still living. Instead, we call that “being in denial.”

Mourning online is changing our rituals. Not only do we mourn people we do not know personally, but the Facebook pages of deceased friends have the potential to live on, turning into spaces where friends and family write public messages, expressing intimate details for all to read as though the person were still alive, or just off vacationing in Thailand. Take this recent post on a deceased Facebook friend’s page: “It’s been about a year since you’ve passed and I never got to thank you for being the mentor that you were for the better part of the last decade. I had moved just a couple of weeks prior to your passing and I regret not having paid you a last visit before I’d left.”

These new forms of grieving erode traditional American boundaries between public and private, and the living and the dead. But in fact, this manner of mourning is really old. Public mourning and maintaining connection with the dead were big in ancient Greece (as they are in other countries today). Funerals were spectacles during the archaic period, the 8th to 6th centuries BCE. Mourning was part theater, part opportunity to show off, and part power play. Aristocratic factions made sumptuous displays of their wealth. Groups of women sang dirges over the body of the deceased in elaborate choral performances. Rival families competed to outdo each other with offering baskets to the family of the deceased.

Greek mourners also spoke directly to the dead. In the laments that survive, women directly address their deceased male kin because those relationships gave women their identity in the first place. In Homer’s Iliad, after Patroclus, Achilles’ closest and dearest companion, is killed, a crowd of women sing lamentations. Briseis (Achilles’ war captive) begins. She has watched her entire family die; she has been given over to Achilles to live as a slave. But Patroclus was always kind to her. She will miss his gentle nature, the way in which he provided comfort in a war-torn world. Her lament is a way of readjusting to a world in which he will no longer offer this solace. She mourns the death of a part of herself.

When I read my friends’ Facebook posts about Prince and David Bowie, I hear similar sounds of Greek lament. We tell the world that in our morose teenage years, we were consoled by listening to “Ziggy Stardust.” We remember dancing to “Raspberry Beret” as a bright spot in a tough summer. We mourn the loss of those who shaped us, who provided kindness in a complicated world. We mourn the death of a part of ourselves.

Prince and Bowie were cultural icons who, among their many contributions, questioned typical gender roles. When we listened to their music, we could step outside of ourselves for a little while. Our public manner of mourning these particular figures recognizes (and reveals a kind of nostalgia for) their revolutionary approach to gender 30 years ago. It honors the new ways of resisting constraints on being male or being female that these performers embodied. As we mourn them, we celebrate their subversive messages.

Ancient Greek funerals also carried subversive undertones. Funerals allowed women an opportunity to step outside of their traditional roles. Women had few political rights or even independent identities and funerals were pretty much their only opportunity for public self-expression, so they made the most of them. Ancient tragedies (the plays of Aeschylus, Sophocles, Euripides) feature mourning women using their laments as a means of resistance to those in authority. In Euripides’ Helen, Helen (of Troy, the face that launched a thousand ships) stages a massive funeral in order to escape the clutches of the evil king Theoclymenus; she pretends to be mourning her husband, Menelaus, who is actually alive, and manages to flee in the boat provided for her feigned funeral practices.

When we post in mourning on Facebook for a celebrity, to some extent we are permitted to step outside of our regular role and display a connection with someone we don’t know. Mourning on Facebook offers us a chance to do something we couldn’t otherwise do. Prince’s family isn’t going to let me go to his funeral. Nor is David Bowie’s.

Like the Greeks, we also sometimes struggle for control over the memory of our heroes. For the ancient Greeks, a hero was an intermediary figure between mortal and immortal, one who had the power to help friends and harm enemies from beyond the grave. The thing is, you usually needed the dead body of the hero buried in your territory in order to make use of its powers. If a deceased individual was deemed a hero, a struggle over the corpse could ensue.

A classic hero in this sense of the term was Oedipus as portrayed in Sophocles’ tragedy, Oedipus at Colonus. Because an oracle said his dead body would bring victory in war, his hometown of Thebes tried to get control over his corpse even before he died. To spite them, Oedipus died in Colonus, after announcing that his cold corpse would drink the Thebans’ warm blood. Greek stories include other conflicts over corpses, as when the Spartans stole the body of Orestes to take advantage of his military powers.

Recently, my friends have stopped sharing links about Prince and the Muppets and shifted to posting articles on opiate addiction. Are we digging up Prince’s body and moving it to Sparta when we emphasize his possible struggles with pain and pills?

Of course, times have changed since Ancient Greece. Back then, the state was not a fan of funerals, which sometimes launched disruptive blood vendettas. Grief had the potential to morph into revenge. Think of Procne who, after taking revenge on her husband (he had raped her sister, Philomela, and then cut out Philomela’s tongue), kills her own son, Itys, feeds him to her husband, and is subsequently turned into a nightingale, forever lamenting the death of her son (she sings “Itys, Itys, Itys”). The potential for a funeral to kick off chaos led the Greek state to curtail women’s mourning rights.

In 2016, though, city governments have an entirely different way of dealing with mourning. They use purple lights to show that they’re friendly, that they care, that they’d like to join the cry party. That’s not very Greek at all!