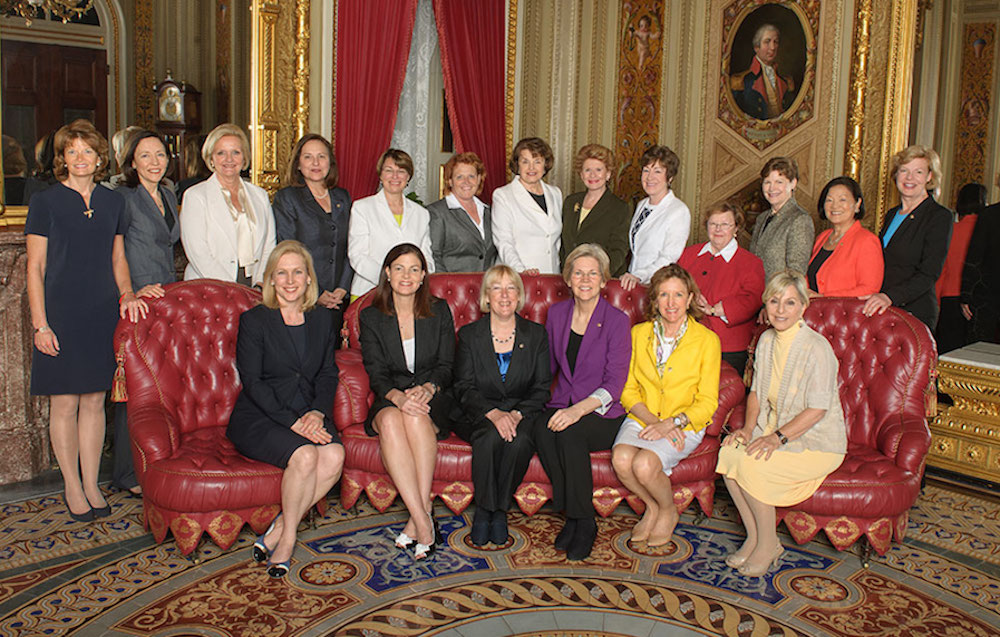 Whatever the outcome of the presidential election in November, the increasing influence of women in politics and culture—in some ways because they are women—is irrefutable, argues Jay Newton-Small in Broad Influence: How Women Are Changing the Way America Works. The Time magazine Washington correspondent and New America fellow Newton-Small visits Zocalo to discuss the ways in which women are changing America’s most important institutions. Below is an excerpt from her book.

Within weeks of being named Budget Committee chair in November 2012, Sen. Patty Murray asked to meet her House Republican counterpart, Paul Ryan, for breakfast in the Senate Dining Room. It was a bit like an awkward first date, she recalled, rather than a business meeting between two political adversaries: Ryan is a conservative, Murray a liberal Democrat who is 20 years his senior.

Instead of talking shop, the two, led by Murray, spent over an hour getting to know each other. How did they get started in politics? How did they meet their spouses? Murray and Ryan forged a friendship that ultimately achieved the country’s first budget agreement in four years, during an infamously gridlocked congressional session marked by paralyzing partisanship and a government shutdown.

In their first breakfast, the word “budget” never came up. “We talked about his family and my family, what he grew up with. I wanted to know him. I wanted to know what drove him and what is his passion,” Murray said.

They both fished, Murray for salmon in her home state of Washington and Ryan for muskie and walleye in Wisconsin. Both their young lives were altered by their fathers’ tragedies: Ryan at age 16 found his father’s body in the family home, dead of a sudden heart attack, and Murray’s father was diagnosed with multiple sclerosis when she was 15, which forced her family onto food stamps. “We know what it’s like to be on your own and fight through existence,” Murray said.

But perhaps the most important commonality was a shared love of football. Murray was an avid Seahawks fan and Ryan supported the Green Bay Packers.

The Seahawks had stunned the Packers in September in a close game featuring a notoriously controversial officiating call at the end. Murray would jibe him about the rivalry to fill awkward pauses during their initial breakfast and later in sometimes heated budget negotiations, particularly over Seahawks quarterback Russell Wilson, who’d attended the University of Wisconsin—home state of Ryan’s beloved Packers—and then went to play for Seattle.

“I think the reality of that is if you focus on something that makes people human beings … if you actually find a way to be friendly with each other and understand where they are coming from, that’s how you get an agreement,” Murray said. “I think women can do that.”

For Ryan, sports became their language. “Basically our staffs had this notion that we’d both start from our 20-yard lines and we’d try to get together in the middle of the field,” Ryan said. “With Patty, we were able to dismiss all of the theater … and get to a very common understanding so that we could achieve our objective. The key was that we set out from the get-go not to swing for the fences and get a grand-slam budget agreement, which we knew would fail because the prior four times it had failed.”

Indeed, that December morning as they laughed over sports, they recognized the scope of the task before them. Murray was determined to do things differently, to break with the system of the past—and she wasn’t the only one. For the first time in history, the Senate was 20 percent female. Even more important, the women sat atop half the committees, exerting outsize influence.

By the end of this rancorous congressional term, the women produced 75 percent of the major legislation that passed the Senate, showing how different the Senate can be—how much more functional—when women reach a critical mass. Study after study shows that women govern differently than men in legislative bodies. They tend to compromise more and grandstand less. They are better at building consensus. And at a time when bipartisan relationships have all but died in Washington, the 20 women of the Senate also had 20 years of deep friendships and trust to draw upon.

It wasn’t that the women had some special feminine powers. To some degree they took charge because the men had lost the ability to find common ground. In the 1990s, then House Speaker Newt Gingrich raised congressional salaries, and members started traveling home every weekend. Though intended to get members outside the insular Beltway, it also gave them less opportunity to maintain relationships. Bipartisan friendships began to evaporate, and most male members hardly knew people in their own party, let alone those across the aisle. But the women of the Senate made a point through the 2012–13 session to continue holding regular bipartisan dinners that started more than 20 years ago, from which have grown countless baby and bridal showers, dinners with spouses and children—and dozens of pieces of legislation.