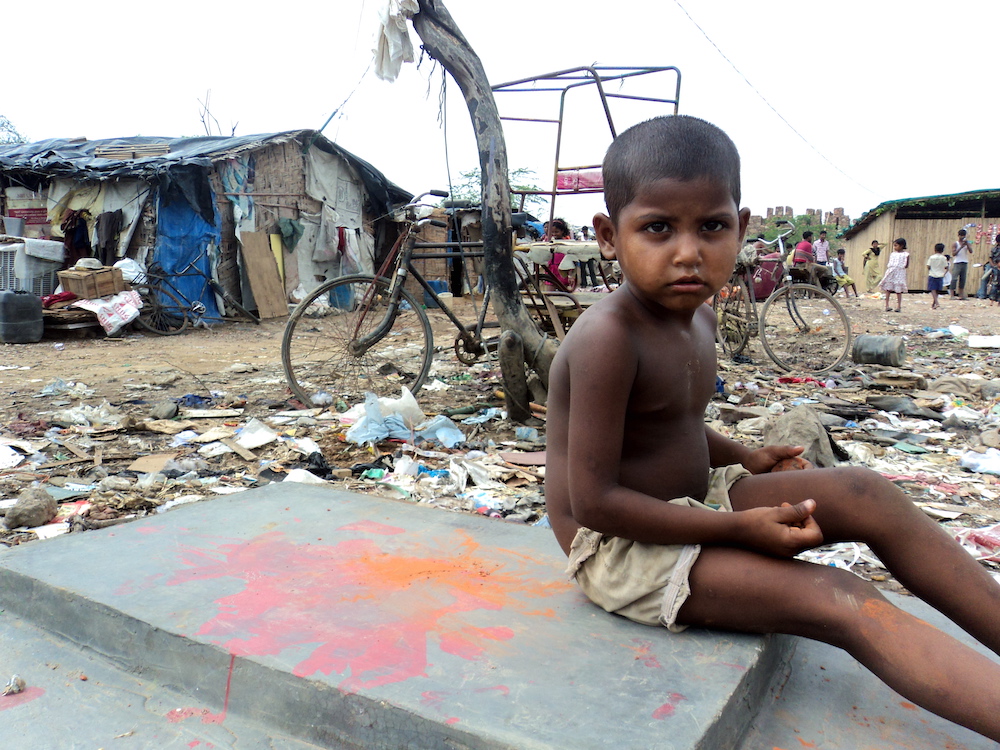 The first thing that struck me was that the streets were spotless, polished clean with the swing of hundreds of broom strokes a day. Women squatted in front of their corrugated iron homes, wearing ragged sweaters and hats to ward off the January Delhi chill. They chatted while they ripped the feathers off scrawny, recently butchered chickens. Preschool age children played with sticks in the dirt, and one three-year-old girl in a dusty pink hoodie with bunny ears confidently grabbed my hand.

The waste-picker slum community I visited in east Delhi in January 2015 works off the landfill. Every day parents and children hike a 1,000-foot-tall mountain of rubbish and hunt for plastic bottles, metal cans and other goods, which they then sell to recyclers, earning about $8 per family each day. In India, the 1.5 million waste-pickers reside near the bottom of the social and economic ladder.

Mohammad Asif and his family are among the more affluent in the community. In addition to the one-room hut he shares with his wife and children, he has a small, covered storage area where his extended family works at separating small mountains of plastic water bottles from Tetra Pak juice packs and aluminum cans. The poorer slum residents (who have no storage area) sell their daily finds to Mohammad, who sorts and stores them to sell to larger, more professional recyclers. He pays significant rent for his hut to a slum landlord. His family has enough food to eat, but barely.

Supriya Bhardwaj, the energetic, young director of Chintan’s children’s programs, walked me around the learning center and the slum community, and explained much about the life of Delhi’s urban poor. We stepped gingerly around several cows feeding on trash and over an open sewer, and then climbed rickety stairs to a collection of four tiny, windowless rooms on the second floor of a listing concrete structure. In each room 15 or so children sat happily on the floor in front of a teacher, learning basic writing and math, and spontaneously sang a welcome song for me.

In total, almost 65 million Indians live in urban slums, and 300 million live under the World Bank poverty line, which is a depressingly low $1.25 each day. Almost a third of the rural Indians and a quarter of its city dwellers are this destitute. This seemingly incurable poverty—despite decades of effort—is the most fundamental problem India faces on its way to becoming a true world power. It is the issue that keeps Indian politicians up at night, determines whether they are re-elected, and has until recently kept Indian leaders—who were preoccupied with solving these domestic issues—from engaging more deeply in international affairs.

By contrast, China’s economic juggernaut has lifted many millions out of poverty, so there are fewer Chinese who live in extreme deprivation. According to the latest World Bank data, in 2011, approximately 84 million Chinese lived on less than $1.25 per day, many of those in the rural interior of the country.

The massive efforts the Chinese government has made to build housing in the country’s interior means there are far fewer Chinese urban slums like the one I visited in eastern Delhi. However, vast income disparities remain. While the GDP per person in Shanghai and Beijing is close to that of Portugal or the Czech Republic, the per capita GDP of interior provinces like Xinjiang is closer to that of Congo. As a result, hundreds of millions of migrant workers left their farms over the past three decades in search of higher incomes in the giant metropolises near the coast. Until recently the government attempted to ignore this enormous migrant community of nearly 220 million people. Instead it tried to push them back to their villages by refusing to provide them with any services at all in the cities.

The fact that India’s poor work mostly in the informal sector while their Chinese counterparts often work for giant factories for formal employers creates a key difference in how each government is able to help its poorest citizens.

Xian and her younger sister Qian are two tiny, energetic women in this mass of migrant humanity. Xian, the quieter older sister, dropped out of high school at age 16, married a man her parents found for her, and moved with him to Guangzhou where they worked in separate garment factories—12 hour shifts, six days a week. After two years, the garment factory reduced the number of overtime hours Xian was able to work, so they moved to Shenzen, where she and her sister were lucky enough to land a job in one of the enormous, city-like electronics factories that assemble our cell phones and tablets.

Xian and Qian do not live in a slum, but their life is at times more reminiscent of Sinclair’s The Jungle than Mohammad’s life in Delhi. Their dorm room, for which they each pay 100 yuan ($16) in rent a month, has eight bunk beds covered in polyester blankets. Suitcases under the beds hold the women’s few possessions. It smells of Chinese noodles and inexpensive room freshener. A blanket covers the one filthy window at all times, because five of the roommates work at night, and the others during the day, so someone is always sleeping.

Xian last saw her husband three months ago because he lives in a similar men’s dorm attached to a different factory across town. “That’s fine,” she comments, “It’s better than fighting all the time when he is around.” It is harder for Xian to talk about her one-year old daughter, who lives with her husband’s parents in their home village in Hunan. She only sees the little girl once a year during the spring festival, and says, “She hardly recognizes me.” Xian talks about her family as if she is describing someone else’s life—with no real feeling. She acts a decade older than her 22 years and is quite pessimistic about her future. Migrant workers endure long separations from their partners and children in order to make enough money to send home. The Economist estimates that 61 million Chinese children are left with relatives in villages while their parents work in big city factories. Factory life is all-consuming, and there is not much room for personal lives.

Income disparity is a serious concern in both India and China. Yet urban poverty feels very different in the slums of Delhi and in the blade-runner landscape of a Shenzhen factory town. Indian slums are more desperately poor. They also function as complete communities, with families of the same caste or religious group shopping from the same street vendors and going to the same schools, and at times living in the same slum for generations. A manufacturing industrial revolution has so far skipped India, so 93 percent of India’s workforce is in the “informal sector.” That includes virtually all of the urban unskilled poor, who recycle trash from landfills, drive rickshaws, or clean toilets in wealthy houses.

China’s manufacturing boom has raised the incomes of millions of former peasants, who now get meager paychecks from factories each month. Unfortunately, the factory towns tend to be lonely places without much community: Xian and Qian say they don’t have many friends because workers come from different regions, often speak different dialects, and the turnover at the factories is so high that it is hard to form lasting bonds.

The fact that India’s poor work mostly in the informal sector while their Chinese counterparts often work for giant factories for formal employers creates a key difference in how each government is able to help its poorest citizens. India cannot even begin to create a Western-style social safety net—most of its poor don’t have paychecks or even bank accounts. As a result, most assistance comes in the form of subsidized food, fuel, and in some lucky cases, free healthcare and housing. India has established enormous wealth transfer schemes, but they are highly inefficient and often corrupt. The government is trying to fix this by signing up the poor for bank accounts and biometric identification, and by moving to direct cash transfers for many assistance programs.

In China, most workers have formal jobs with paychecks. That makes it easier for the government to send assistance in the form of social security, unemployment insurance, and other benefits, if it chooses to. China was until a few years ago reluctant to create any social safety net at all for the migrant poor at the bottom of the scale, because they wanted them to move back to the countryside. Now the government may have no choice: Xian, Qian, and their young colleagues at the factories are bombarded with information from advertising and social media that shows other Chinese making more money, buying houses, building families, and creating what President Xi calls the “Chinese dream.” Through social media the poor and lower middle classes increasingly see that China’s boom times are leaving them behind. These workers are causing the stirrings of a labor unrest movement in China that has the government very worried.