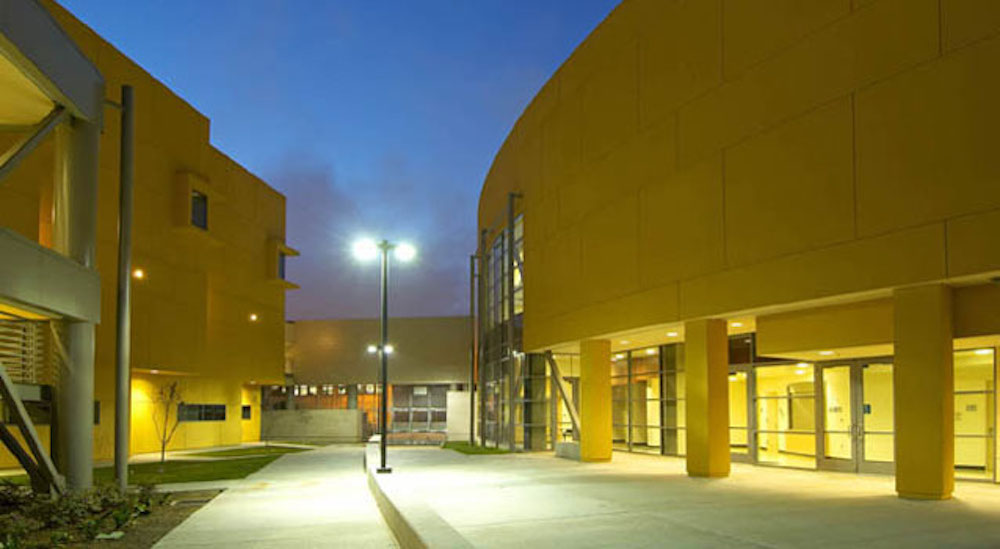 Back in 2005, when South Los Angeles’ Santee Education Complex opened, we were among the very first teachers hired. At the time, Santee was the first new high school constructed by L.A. Unified in 35 years.

Today, we’re still here—we’re assistant principals (and a little sick of each other, we joke)—in a very different Santee and a very different South L.A. Over the past 11 years, we’ve learned a lot about how to build and improve a school, and a community.

The biggest lesson is that a school doesn’t have to have a special status—as a magnet or a charter—to be academically challenging. Santee is a comprehensive neighborhood high school, and this year, 251 out of our 297 graduating seniors are on their way to two and four-year college. This is in contrast to when we opened, when nearly three-quarters of our students didn’t graduate at all.

Santee’s dedication to the neighborhood is part of what has drawn us to it. Both of us are from South L.A. Terri grew up right near where the school sits now, land that was then a dairy farm. Pablo is from the Florence-Firestone neighborhood and went to Fremont High School.

Before Santee opened, both of us were worried that South L.A. schools weren’t producing enough college-ready kids. Pablo had worked as an admissions recruiter for UCLA, his alma mater, and he saw how few South L.A. kids got in. He wondered if it was because few teachers in South L.A. understood the area. When he worked at Roosevelt High School in Boyle Heights, he was impressed to see that many effective teachers there were also Roosevelt alums.

Pablo took a teaching job at Santee precisely because of the possibility of building a similar cadre of South L.A.-savvy teachers. Terri also was attracted by the possibilities of a new school, including the opportunity to write a new English curriculum. She wanted to keep working with the principal of the middle school where she was teaching, who had been hired by Santee. Pablo saw similar curricular possibilities in economics.

But Santee got off to a slow start. Some of it was just the hiccups of any start-up, but we also had serious student challenges. Many of our students came from a badly overcrowded nearby high school, and Santee was being used as a dumping ground for high-needs students that other schools were struggling to serve. Few of the students we got were on track to graduate—which made our graduation rate just 27 percent.

The biggest challenge in improving Santee was that the school didn’t have a common culture. There were two structural problems that proved to be big barriers. First, Santee was on a three-track, year-round calendar to accommodate all the students sent our way, so everyone was on a different schedule. Secondly, the school was split up into SLCs—“Small Learning Communities”—and each had a different academic focus, from arts to business. So students were taking different classes, and different subjects.

The fact that South L.A. itself was changing made changes to Santee possible.

Change came slowly, but it came. In 2008-09, Santee joined the Partnership, a sort of district within the school district. Most of the Partnership schools were in South L.A., and other schools included elementary and middle schools that fed into Santee. That made it easier to create cohesiveness and continuity. After that, we got rid of the multi-track, year-round calendar. We also moved away from the Small Learning Communities, as it became increasingly difficult to maintain them as purely separate and individual entities with the right amount of teachers. We also got a new dynamic principal, Dr. Martin Gomez, who didn’t see any limits to what was possible.

The fact that South L.A. itself was changing made it easier to envision change at Santee. Voters had approved school bonds in the previous decades, and so other new schools and school facilities were opening, taking some of the pressure off Santee. In addition, enrollment was down in district schools as the number of children declined and charter schools opened.

A smaller, more cohesive school was easier to manage. We found we could offer students more access to a variety of courses, since they were no longer limited to their small learning communities. We were able to focus more on college readiness, and we started to offer more and more Advanced Placement classes, which can be used for college credit. This past year, nearly 500 students took at least one AP class at Santee.

We’ve both seen how pushing kids into one rigorous class inspires them in the rest of their classes. Students who are doing college work begin to ask about preparing for college, paying for college, and how they can excel in college. We also think this greater cohesion and rigor help explain improving test scores and graduation rates at the school; the unofficial rate for this just-concluded school year is 87 percent.

Under the newer structure, we’ve also done more for teachers. We’ve invested heavily in what we call Professional Learning Communities, which give teachers the opportunity to collaborate with each other to build instructional plans and common assessments, as well as lessons that meet the needs of individual students.

And with the support of the partnership, we’ve gotten better at attracting nonprofit and corporate partners to support the school, including Fox Sports West (student internships), Ernst & Young (student mentoring), and Cal State Los Angeles (which offers our students one of their math classes right here on our campus).

Like it or not, public schools compete with each other these days for both faculty and students. In L.A. Unified, students and families can rank the schools they want to attend, and Santee wants to make sure that we continue to be the top-ranked school among students in our area. So we’ve become more student-focused, drawing on every resource we can find. We hired two pupil services and attendance (PSA) counselors, who advocate for the students both inside and outside schools. (Too many California schools don’t have any counselors.) We also invested in two psychiatric social workers, and two Diploma Project counselors, who keep students on track to graduate. And we have a dedicated intervention coordinator, who gets involved when students get off track.

These investments have helped us build a more compassionate culture. Since we’re a comprehensive school, that’s essential. We have more than 300 special education students, and more than 75 of them have moderate to severe disabilities. We’re also the only school in South L.A. with an American Sign Language class.

We also think this greater cohesion and rigor help explain improving test scores and graduation rates at the school; the unofficial rate for this just-concluded school year is 87 percent.

We’re proud that we haven’t had any bullying incidents, and this spring, the culture here allowed us to become the first high school in LAUSD and the first public high school in Southern California, that we know of, to open a gender-neutral bathroom, so students can use the bathroom without fear of judgement.

Even with all of this, we need to keep doing more. Pablo, who oversees the AP program, has made it a priority to increase the number of kids who pass the tests, not just take the class. Next year, Santee will be launching a new School for Advanced Studies. We’ll have to be careful to make sure that it doesn’t become a place apart from the rest of the school, but we have to do it in order to remain competitive.

At the same time, we need to do better by our special education students and our English-language learners. We’re in the process of creating common assessments among all teachers for special education, and adding more rigorous instruction. We’re encouraging our disabled students to take more regular classes. And we’re reevaluating how we work with the Santee students who are new to the country. How do we give them English language support and make sure they graduate at the same age as other students?

The two of us often talk about changing the reality of Santee (we want 100 percent of students ready to go to college) as well as the perception of the school and the community. We want to correct the misconception—still all too common—that students and parents in South L.A. don’t care as much about education as their affluent counterparts. In our experience, South L.A. parents are even more driven about getting their kids to college.

We want people to know that kids in South L.A. can get a great education at the school down the street—and that they will receive a quality education from teachers and administrators who were once South L.A. kids themselves.