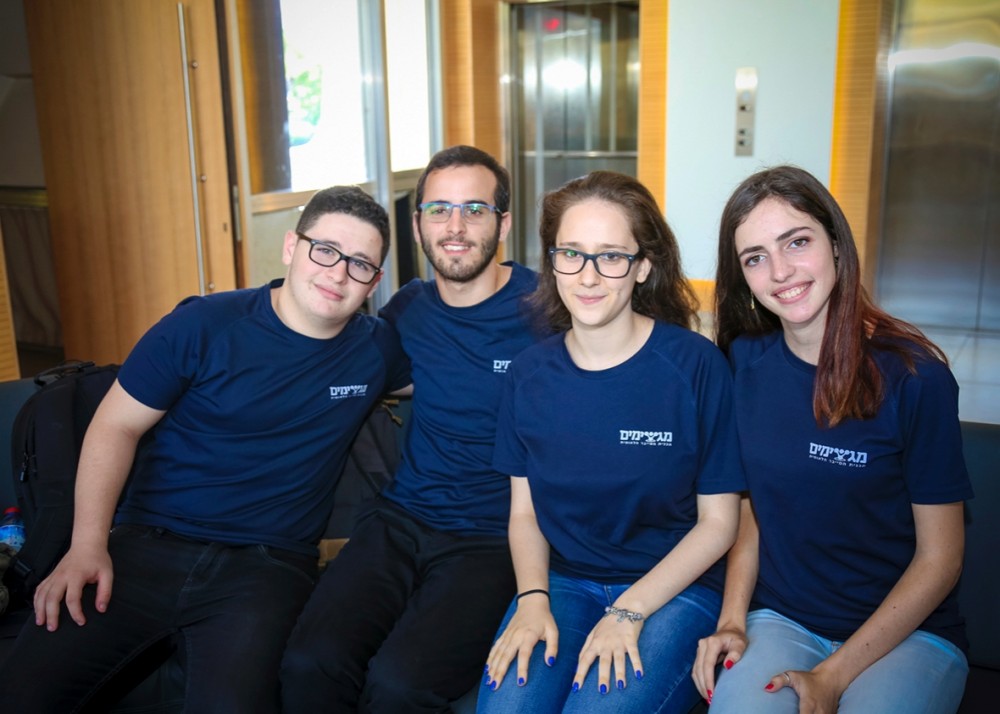 Ilana Gutman “knew nothing about computers” three years ago when two soldiers visited her freshman high school class in Ashdod, a city in the south of Israel, and encouraged the students to apply for a high school cybersecurity training program. Now 17, Gutman is finishing her third year in the Israeli program, called Magshimim, and is preparing to enter the army, where she hopes to work in intelligence.

Gutman and her boyfriend, May Kogan, whom she met through Magshimim, will spend this summer working at a camp for Israeli teenagers studying cybersecurity. They have just completed a final project that involved building an application to let teachers remotely control the computers of their students in order to administer an online class in the event that school is canceled due to “a war, or snow” (“what we have and what you have,” Gutman explained to me, referencing the different reasons for canceling school in Israel and the United States).

Many countries, including the United States, have programs designed to teach elementary and high school students coding and computer science skills; many have programs aimed at attracting diverse students to those subjects. But Israel—in large part because of the constant threat of war or cyber attack—is one of the only nations to boast a thriving program for training teenagers from underrepresented groups to focus specifically on cybersecurity.

Beginning in ninth grade, Israeli teenagers from the nation’s “periphery” (that is, outside the well-populated and wealthier cities in Israel) are screened for the afterschool cybersecurity program, which places a particular emphasis on recruiting girls. Magshimim was launched in 2011 by the Rashi Foundation, a philanthropic organization focused on supporting underprivileged Israeli youth, and has been co-sponsored by the Israeli Ministry of Defense since 2013. More than 530 students have successfully completed the program, and it is in the process of trying to scale up the size of its classes tenfold, from roughly 400 students to 4,800 participants over the course of the next five years.

Magshimim accepts roughly 30 percent of the students who apply, following a series of tests and interviews during which the program screens for determination, dedication, and sociability—but not prior computing experience. That’s how Gutman and students like Revital Baron, 17, were able to make the cut, despite having no background in computing. “I just knew how to use Facebook and play computer games,” Baron said of her familiarity with computers prior to entering Magshimim. Now she, like Gutman, is finishing the program and has built, for her final project, a robot that can create a visual map of the space it occupies using ultrasonic sensors to compute the distance from walls and other obstacles.

The students selected for the program attend three-hour cybersecurity training sessions after school two days per week from 10th through 12th grade. Over the course of three years, they work on programming projects, study computing theory, implement cryptographic protocols, reverse-engineer malware, and study the architecture and design of computer networks. They finish high school with a skillset comparable to that of many college juniors and seniors who study computer science in the United States. (Many of them also finish high school fluent in English—a skill born of many hours poring over the forums on Stack Overflow to help answer technical questions, they told me.)

In the short term, these students are being groomed to enter the Israeli Defense Force’s elite cyber branches during their compulsory military service. In particular, the teenagers in Magshimim hope to join Unit 8200, the intelligence and cybersecurity team featured in Richard Behar’s recent Forbes article as “Israel’s secret startup machine” because so many of its alums enter the private sector and launch successful tech (and often specifically security) companies. If Unit 8200 provides the pipeline for Israel’s start-up economy, then Magshimim provides the pipeline for Unit 8200.

“We are a little country and we have a lot of enemies, so we need to secure our data.”

In the United States, we talk a lot about the “pipeline problem” in technology—the lack of women and underrepresented minority students finishing college with degrees in engineering and computer science and the resulting lack of diversity at many major tech firms. Israel is concerned about these same issues, and so Magshimim is not just any pipeline—it’s specifically designed to recruit from underrepresented populations in cybersecurity, including girls, religious students, and children outside the major cities. To attract these populations into cybersecurity, it’s important to recruit students when they’re young, before they form too many ideas about what they can and can’t do or should and shouldn’t be interested in, before they begin to feel that they’ve already fallen behind and can’t compete with their peers. In fact, the program is now working on extending its recruitment even earlier, to include training for eighth and ninth graders.

Perhaps in part because “Magshimim not only looks for smart people, but also social people,” one student told me, and perhaps in part because it includes so many girls, the students in Magshimim are an astonishingly outgoing bunch. When I was visiting Israel recently for their 2016 Cyberweek symposium at Tel Aviv University, which included a Youth Conference for hundreds of Israeli high school students studying cybersecurity, many of them were eager to tell me how important the program has been for them socially, as well as technically.

“I really feel like Magshimim is my second home,” Baron said. “All of my best friends are from Magshimim.” Gutman and Kogan, meanwhile, are quick to credit the program with their relationship. A WhatsApp group keeps all of the seniors in the program across Israel, some 150 students, connected online, and the program also hosts regular overnight “Cyber Nights” and challenge events that seem to combine elements of military or law enforcement exercises with the free-food, stay-up-all-night ethos of the hack-a-thons that are commonplace on American college campuses.

For instance, one Magshimim event, a few years ago, required students to investigate a stolen pizza delivery by accessing a building’s security feeds to retrieve surveillance video footage of the theft. “Then we found the pizza and we ate it,” recalled Omer Greenboim Friman. In another exercise, there was a simulated crisis in which the building’s internet access had been completely shut off and the students had to find a way to re-establish connectivity with the outside world.

Underlying all of Israel’s efforts to ramp up its cybersecurity education and training programs is the sense that such threats (internet blackouts, not pizza theft) are never very far away and that no one is too young to be thinking about and preparing for them. The students in Magshimim make it clear in conversation—sometimes to an extent that feels shocking to an observer from another country—that they understand this is about war.

“We are a little country and we have a lot of enemies so we need to secure our data,” Kogan said. “When we were just kids we didn’t have anything we could do about these threats, but now when we are getting into the army we finally have the power to do something about it.” Similarly, Gutman told me, “I really want to go to the army and contribute. My dream is maybe to stay in the army.”

It’s almost inconceivable to imagine hundreds of tech-savvy teenagers in the United States feeling that way about, say, joining the NSA. Daniel Ninyo, another Magshimim senior, has a life plan that might seem more familiar to U.S. high school students: After serving in the IDF, he hopes to launch a start-up company.

When students in the United States get excited about computer science, their interest often lies in building new tools for social change or games or slick, marketable apps, rather than security. Two uniformed soldiers in a classroom would be unlikely to pique the interest of many U.S. high school freshmen the way that they did Gutman’s. So is it possible to replicate the success of a program like Magshimim in the United States? In some regards, absolutely. The United States is, of course, a much larger country than Israel, with a much more decentralized education system and no compulsory military service. But it could still support competitive, well-regarded cybersecurity afterschool programs that target students from underrepresented communities who have no prior coding experience and offer them not just classes but also a rich social environment, regular mentoring from older alums of the program, and, occasionally, pizza.

And yet—it takes more than pizza to create a program that is held in as high regard as Magshimim, both by its participants and the rest of the country. (“I was in a restaurant with my friends once and the waitress looked at us and she said, ‘Are you guys from Magshimim, that cool cyber program?’” Gutman recalled.) To care deeply, passionately about security, I realize as I speak with the Magshimim students, it helps to feel truly, immediately threatened.