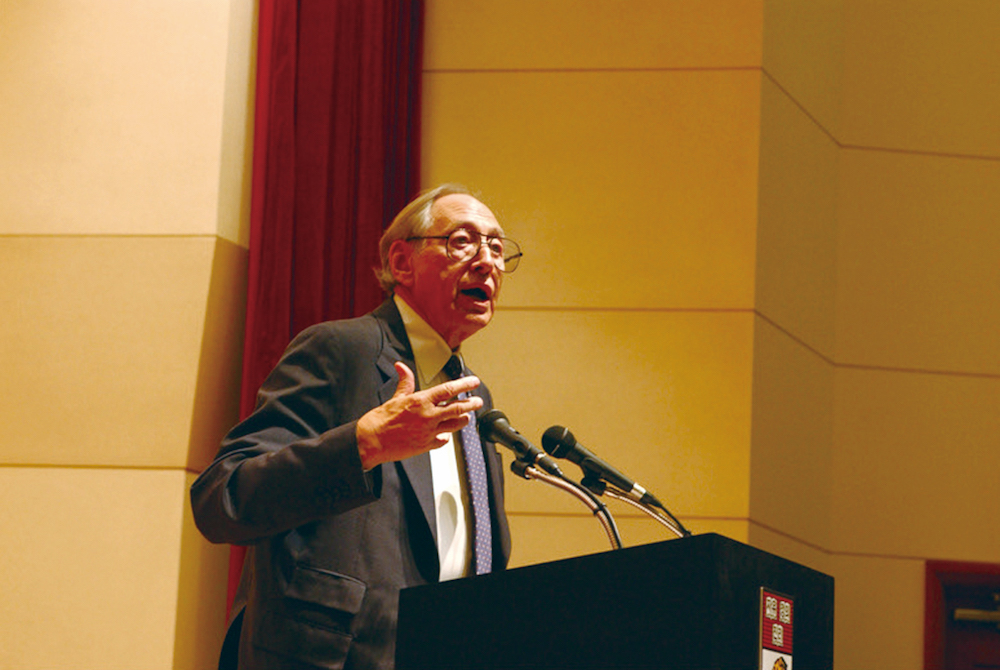 Futurist Alvin Toffler’s death on June 27 at age 87 has brought out the usual obituaries, marveling at the way his self-educated intellect grappled with the complex intertwining of technological and social change and created best-seller buzz around his predictions. The account of his life in the New York Times follows a familiar arc: from child of immigrants, to self-made man, to adviser to some of the most powerful men on the planet. His books, especially Future Shock (1970) and The Third Wave (1980), achieved required reading status among a certain set, apparently including politicians as diverse as former House Speaker Newt Gingrich and former Chinese Prime Minister Zhao Ziyang.

Future Shock sounds like a sensational exclamation. It was, however, a sober diagnosis of the fear, alienation, and anomie with which people responded to the combination of rapid technological change and what Toffler saw as its disruptive social consequences. Looking back on the quarter-century since the end of World War II, Toffler observed major technological innovations—including television, the birth control pill, and travel by jet aircraft—and the cresting of the transformative “wave” from an industrial to a post-industrial society in which brain work was dominant over physical labor. Looking forward, Toffler saw more and more rapid innovation, and greater social dislocation. In response, Toffler suggested, we needed to develop a more “anticipatory democracy” as a cure.

In a more eulogistic piece in the Times, Farhad Manjoo (a former Slate writer and author of the Times’ “State of the Art” column) writes that though Toffler’s “diagnosis [of future shock] has largely panned out … futurism has fallen out of favor.” Manjoo describes how hardworking futurists have few colleagues, governments fail to invest in infrastructure, and high-tech colossi stand astride the political-economic landscape, commanding tribute from markets and governments alike.

Manjoo describes how Toffler was overtaken by hucksters riding his own wave of popularity. Furthermore, the partisan politics that arose in the 1980s put an end to an institutionalized version of futurism, the congressional Office of Technology Assessment, which was sacrificed in 1995, ironically, to Gingrich’s Republican Revolution. With almost every major area of technology in revolutionary foment—artificial intelligence winning at Go, genetic engineers plotting to synthesize the human genome, commercial space firms aiming at Mars—we have never, according to Manjoo, been more in need of futurism.

My high school Latin teacher taught me the ethic of de mortuis nil nisi bonum: Say nothing but good about the dead. But Toffler’s brand of futurism will not get us out of what future shock–related symptoms we may suffer. His current irrelevance stems from many causes, not the least of which is that Toffler misunderstood the underlying etiology of future shock and therefore offered the wrong prescription.

While “anticipatory democracy” sounds salubrious, Toffler defined it very specifically: “Anticipatory” meant making use of long-term forecasting techniques, especially the computer-based modeling of economic, demographic, and other trends that were just coming into vogue in the late 1960s and early 1970s; “democracy” meant the kind of intimate town halls of Norman Rockwell mythology that would restore to individual citizens a modicum of control over their careening, caroming lives.

Toffler made three mistakes that worked against the progress of his project. First, while it may be real, future shock is not the consequence of technology’s disruptive force on society because society also exerts force on technology. Or, rather, though it can appear as if technology is causing something to happen in society, people actually make the decisions in the conception, design, manufacture, and deployment of technology. The sense of this phenomenon can be inferred from Winston Churchill’s aphorism about architecture: “We shape our buildings; thereafter, they shape us.” Contemporary scholars of such complex phenomena refer to socio-technical systems to describe what Toffler took as a simple relationship of the impact of technology on society.

Second, Toffler placed an inordinate trust in the expertise embodied in predictive models. His version of anticipatory was more aligned with identifying a current trend and extrapolating it to a future state, much the way that Ray Kurzweil and others use Moore’s Law to predict future computing capacity and the coming “singularity” of super-intelligent machines. But prediction, especially across complex socio-technical systems, is illusory. Greek myths narrate the failure of prediction: For the Trojan prophetess Cassandra, those in power found ways to ignore even her perfect prophecy. For the seer Tiresias, prophecy set in motion precisely those events that fulfilled the prophecy itself, as in the Oedipus story. The oracle at Delphi articulated a prediction bound to be self-servingly misinterpreted beforehand, only to be understood properly in retrospect.

… while it may be real, future shock is not the consequence of technology’s disruptive force on society because society also exerts force on technology.

While we moderns have largely disposed of the concept of fate that competed with prophecy in the Greek world, we can all imagine contemporary issues (e.g., climate change) that exhibit precisely these dynamics. No less a modernist than Isaac Asimov—inventor of the fictional predictive social science of psychohistory in his Foundation trilogy—said, “If we could use the tenets of psychohistory to guide ourselves we might avoid a great many troubles. But on the other hand, it might create troubles. It’s impossible to tell in advance.”

Toffler’s third error follows from these two. Small-scale, directly democratic town halls are virtuous. They will not function to reduce future shock, however, if they are connected only to the misguided disposition of predicting the future. Democratic values and priorities expressed in town halls, alas, do not constitute relevant data in predictive models. Moreover, if the model of socio-technical change has room for only one direction of influence, as Toffler’s does, then even an anticipatory democracy is likely to fall short of being able to influence the technological trajectory for its citizens’ benefit. They will not see the people with power who hide behind the glimmer of technologies as having an impact on society.

The alternative is to establish an agenda based on a more authentic and realistic meaning of “anticipation” which is, etymologically speaking, not about a technical capacity to describe or say something before it happens (predict) or observe the future (foresee), but instead is to build a capacity for something prior to when it is needed. Building anticipatory—rather than predictive—capacity into our social relationships with technology begins to create conditions in which broader groups of people can self-consciously reflect on the values that go into technology, so that the resulting innovations might more readily reflect those values and create less future shock.

My colleagues at Arizona State University, University of Wisconsin, and Georgia Tech and I have pioneered something of a reboot of anticipatory democracy that we call “anticipatory governance.” While we, like Toffler, hope to reinvigorate intimate democratic engagement, we focus on two-way conversations with experts, creating a participatory technology assessment that the Office of Technology Assessment never managed. Our assessments involve scores of hundreds of ordinary citizens engaged in informed discussion about such issues as space missions we have done for NASA, or the global climate and energy nexus conducted by the Danish Board of Technology Foundation.

We join engagement to a more nuanced and balanced understanding of expertise by emphasizing integration across disciplines. The Socio-Technical Integration Research project embeds social scientists and ethicists in science and engineering laboratories, to encourage researchers to reflect more deeply on the choices they make in the laboratory that have ramifications for those of us on the outside. Others are also promoting socio-technical integration, like scholars studying the flexible nature of expertise in the Communities of Integration project and art-science collaborations like LASER and DASER.

We don’t attempt to predict the future or estimate probabilities and risks for certain occurrences. Instead, we explore plausible scenarios and other methods for generating anticipatory knowledge and a greater anticipatory capacity among broader publics. Such less technocratic forms of futurism are practiced by the Oxford Futures Forum, which connects scenario development to other disciplines like design, and the nonprofit Institute for the Future, which develops and disseminates innovative, future-oriented tools like “Artifacts From the Future” and collaborative forecasting games.

At ASU, we have also established a new School for the Future of Innovation in Society. While we are not training futurists, per se, our students are learning across these tools of engagement, integration, and anticipation to plan for the kinds of futures that we will want to inhabit. And they are learning to frame innovative efforts as part of a larger social fabric that informs both wants and needs about our common futures.

We owe a debt to Alvin Toffler, but it is more inspirational and heuristic than methodological and programmatic. By deeply engaging ordinary citizens, integrating knowledge across disciplines, and cultivating a broadly anticipatory disposition, we can lessen the shock of the future.