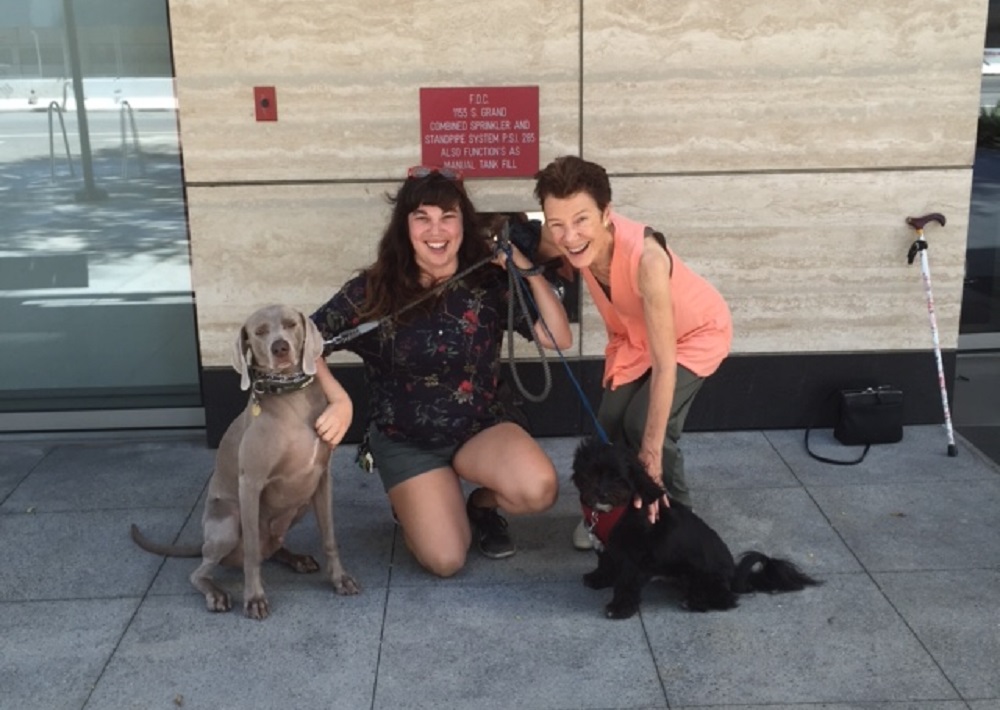 Ready for anything at the age of 78, I sold my home on the edge of Ventura County and moved into a downtown Los Angeles high-rise full of millennials and dogs.

A demographic poster child for DTLA I’m not, given that my neighbors are in their 30s. And 80 percent of them work downtown, making about $100,000, while I’m retired. But when it comes to gender I fit right in (57 percent of downtown residents are women, according to surveys). And my reasons for choosing to live downtown seem to be in tune with the millennials—being part of a rejuvenated, vibrant area; the luxury of using your car sparingly or not at all; the ubiquity of eclectic restaurants, bars and food trucks; a fantastic range of arts, music performances and sports venues; and the sheer diversity of the neighborhood.

Upon moving in, my more advanced age did attract some attention. The millennials on my floor were puzzled about that folded-up newspaper, left by my door each morning, wondering exactly what it was. My nextdoor neighbor gently advised me that his late night gatherings would interrupt my sleep. (Clearly I did not exude party girl.) 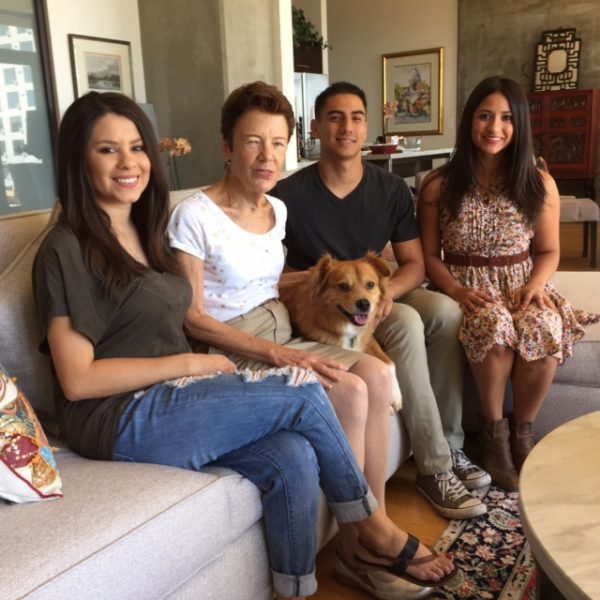 Billie, second from the left, with neighbors and dog in her apartment.

Approaching my ninth decade, I took heed of a suggestion from researchers at UC Irvine’s Institute for Memory Impairments and Neurological Disorders, that learning a new language would help stave off Alzheimer’s. So, I listened carefully to those in my elevator and in the Starbucks downstairs and mastered an amazing language, aka DTLA Millennial-ese. My new vocabulary includes: dipset, hundo P, JOMO, perf, JK and phubbing. And, those brain cells are a growing.

Settling in, I learned some valuable lessons. Never pet the dog in the elevator or you will miss your next appointment as the owner waxes on and on about his or her beloved. Do hug teenagers in the elevator as they are generally ignored in the presence of so many babies and dogs. Resist buying earplugs—the beep-beep of construction trucks backing up, sirens screaming, Uber cars circling and the around-the-clock noise becomes part of the magical music of downtown. You get so used to it that, if suddenly there were no noise, you wouldn’t sleep. 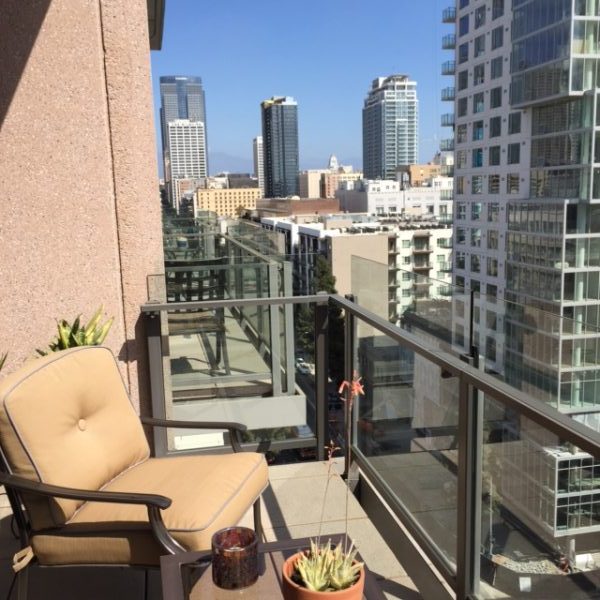 This year there has been a 2 percent drop in violent crime in the LAPD’s Central Division, which includes parts of downtown, Skid Row and Chinatown; ours is the only division in the city to experience a drop. Still, never hesitate to ask a stranger to keep you safe in DTLA. Case in point: I was attending a Laker’s game at Staples Center and had driven my car there for some reason I’ve forgotten.

Being a non-VIP, I parked in a lot three long blocks from the venue. It was a good basketball game, but I had to leave at halftime. Consequently, there were very few people on the sidewalks as I hurried to my car. Soon I noticed several men loitering at the corner of my parking lot with no one else in sight. About that time, someone walking behind me passed by and I looked him over—not too scruffy and clearly preoccupied, with his cell phone glued to his ear. When I asked if he would mind walking me to my car, pointing to the possible gang ahead, he replied OK and never said another word. As we strided next to each other, I overheard several conversations he was having on the phone and it clicked in that my escort was a drug dealer. Instant protection! No one was going to mess with me. 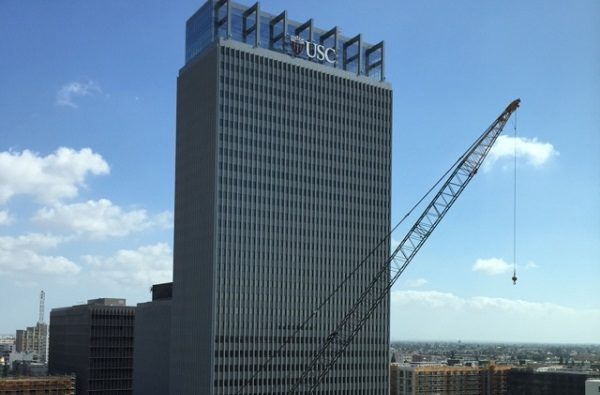 The view across the street from Billie’s place.

I’ve learned that first impressions often don’t hold up. I arrived convinced that my green thumb would not yield anything in DTLA with all its concrete and construction dust. But I was pleasantly surprised. Although I live on the 12th floor of a high-rise, pots full of succulents are happy on my balconies and a humming bird visits every day. There is also another interesting bird downtown—the crane, known to frequent construction sites. Roosting throughout much of downtown, this bird is deserving of being recognized as the official mascot of DTLA.

After years of being a ghost town after 5 p.m., downtown LA is now being called, “the Capital of Cool” by GQ Magazine. Some millennials might think migrating seniors will change the vibe of DTLA. Unlikely. We will continue the cool by helping with dogs and babies and offering some wisdom along the way. So, if you want your grandchildren to insist on visiting you regularly, join me. Downtown doesn’t disappoint. In fact, when it comes to DTLA, I am definitely ‘hundo P’.