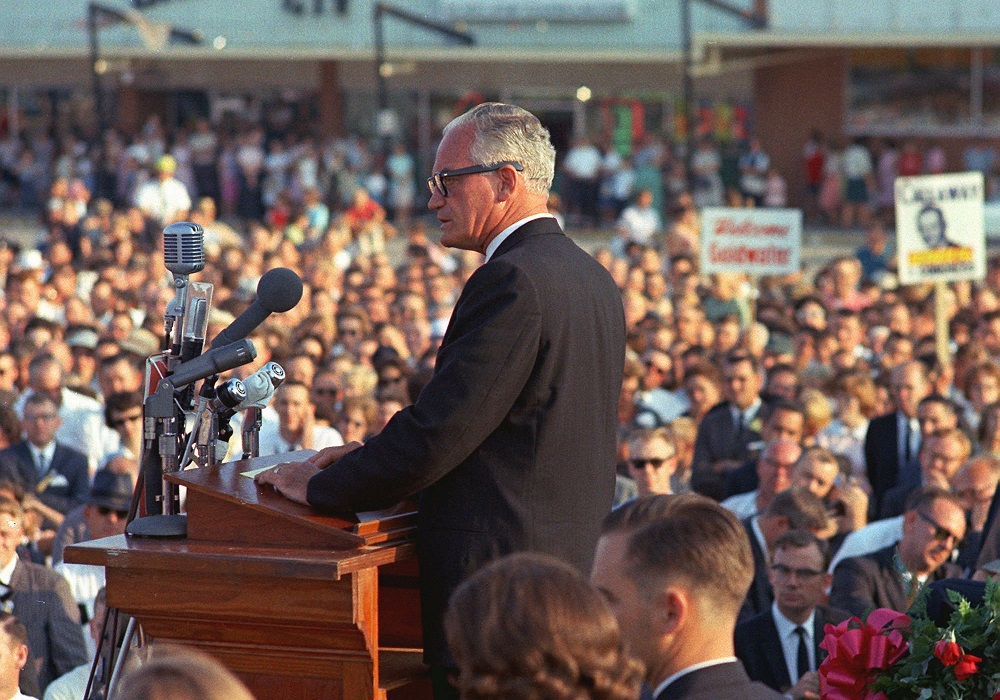 The recent report that George H.W. Bush plans to vote for Hillary Clinton made the former President the highest-profile Republican to repudiate the party’s presidential nominee, Donald Trump. The list included dozens of prominent GOP officials, such as former National Security Advisor Brett Scowcroft, former Secretary of State George Shultz, and former Homeland Security Secretary Tom Ridge. To highlight the trend, the Clinton campaign has run a commercial featuring several Republican members of the House or Senate announcing that they could not vote for Trump.

The Clinton ad imitated an offering from Lyndon Johnson in the 1964 presidential campaign. That year, a Johnson ad featured quotes from three prominent Republican governors—Nelson Rockefeller of New York, William Scranton of Pennsylvania, and George Romney of Michigan—denouncing their party’s nominee, U.S. Senator Barry Goldwater of Arizona. The ad concluded, “Even if you’re a Republican with serious doubts about Barry Goldwater, you’re in good company.”

Much like Trump in 2016, Goldwater ran an outsider’s campaign, far more popular with the party’s grassroots than its establishment. Goldwater’s uncompromising anti-communism and vote against the 1964 Civil Rights Act (which he considered an unconstitutional federal intrusion on states’ rights) attracted support from conservative Democrats, especially from the South. But his campaign’s high-profile defenders of segregation, most notably U.S. Senator Strom Thurmond of South Carolina, repelled moderate Northern Republicans. So did the candidate’s intemperate statements on the campaign trail, as when Goldwater mused about lobbing nuclear weapons into the “men’s room at the Kremlin.”

President Johnson effectively served as his own chief strategist. During the summer of 1964, he lamented the media’s excessive interest in the backlash—Southern Democrats who were abandoning the party because of its support for civil rights legislation. “They talk about all the South quitting me, and they talk about everybody quitting me,” Johnson complained to one aide in August. But polls indicated that the greater number of partisan defections had come from Republicans, who distanced themselves from Goldwater. It was time, Johnson believed, to focus on “the Republican backlash—all these extreme statements [by Goldwater], and Ku Klux Klan, and all this other stuff.”

Johnson eventually deemed the phenomenon “the frontlash” (a term he thought would appeal to journalists). Upper middle-class independents and moderate Republicans normally didn’t vote Democratic in national elections, but they could be wooed through a relentlessly negative campaign that portrayed Goldwater as a dangerous extremist. Talk “about the danger of a woman having a two-headed baby, and men becoming sterile, and drinking contaminated milk, and these things,” Johnson privately explained, and “they’ll know who they ought to be scared of without our ever saying so.”

This strategy reached its most aggressive point on Sept. 7, 1964. A Johnson commercial featured a little girl, plucking the petals off a daisy, counting one to ten as she did so. Her voice, then image faded, eventually replaced by a bomb countdown and a mushroom cloud. Finally, Johnson’s voice emerged: “These are the stakes. To make a world in which all of God’s children can live, or to go into the dark. We must either love each other, or we must die.”

Independents and moderate Republicans normally didn’t vote Democratic in national elections, but they could be wooed through a relentlessly negative campaign that portrayed Goldwater as a dangerous extremist.

The daisy ad, the most famous attack ad in any presidential campaign, generated furious protests from Republicans, who argued it unfairly demonized their nominee. The commercial, which appeared only once but received massive media attention, helped firm up the connection between Goldwater and nuclear war.

While Johnson’s strategy was tactically brilliant, it came with a drawback: the President struggled to articulate a positive agenda. Instead, he fell back on clichés about patriotism and biblical values, generic themes that would alienate neither the union activists who then formed the Democratic Party’s base nor the traditionally Republican suburbanites, mostly women, who he hoped to attract to his coalition.

Clinton has run her version of a frontlash campaign in 2016. But the problem that Johnson confronted has, if anything, become even more pronounced. Bridging the enormous ideological gap between millennials who backed Clinton’s primary rival, Bernie Sanders, and “never Trump” Republicans would challenge even the most talented politician. As a substitute for Johnson’s paeans to patriotism, Clinton has relied on appeals to identity politics, but, like Johnson in 1964, her approach has primarily been negative, focused on convincing voters that electing her opponent could have catastrophic consequences for the republic.

On Election Day 1964, Johnson carried 44 states and won 61 percent of the popular vote. The next day, however, the President worried that his enemies would present the outcome as the voters having voted against Goldwater without embracing the specifics of his program. Journalists, he lamented, would ignore the “love and affection” voters had shown him. Instead, they would present him as “the lesser of two evils. Corn pone. Southern.”

Even a Johnson victory lacking a meaningful ideological mandate yielded significant congressional gains for his party. In the 1964 House contests, Democrats picked up 37 seats, giving them a more than 2-to-1 advantage for the 1965-1966 session. And despite holding 26 of the 35 Senate seats up for election, Democrats gained two additional Senate seats in 1964. But the surge was temporary; Democrats suffered major losses in the 1966 midterm elections. And the party’s popular vote came in almost 20 points below Johnson’s 1964 level in 1968, when Richard Nixon’s victory returned Republicans to the White House.

Although Clinton has never enjoyed a polling lead comparable to LBJ’s in 1964, the lessons of the past would suggest that her updated frontlash strategy should produce a victory this November. But it seems unlikely a Democratic Congress will accompany any victory. For the party to secure even a one-seat majority in the House, Democratic incumbents would have to go undefeated and Democratic challengers would need to win 27 of the 29 seats the non-partisan Cook Political Report currently lists as either toss-ups or leaning toward Republicans. The party’s Senate chances initially looked more promising, but in recent weeks, declining fortunes in Ohio and Florida mean that the Democrats might need to win on unfavorable terrain in either Missouri or North Carolina to retake the Senate.

In our vastly more polarized era, it might well be that only a positive message from the top of the ticket—such as that offered by Ronald Reagan for Republicans in 1980 or Barack Obama for Democrats in 2008—will meaningfully affect down-ballot races. But at the presidential level, Johnson’s frontlash model has been revived more than 50 years later, with the Democrats once again facing a Republican whose political and personal positions render him particularly vulnerable to the tactic.