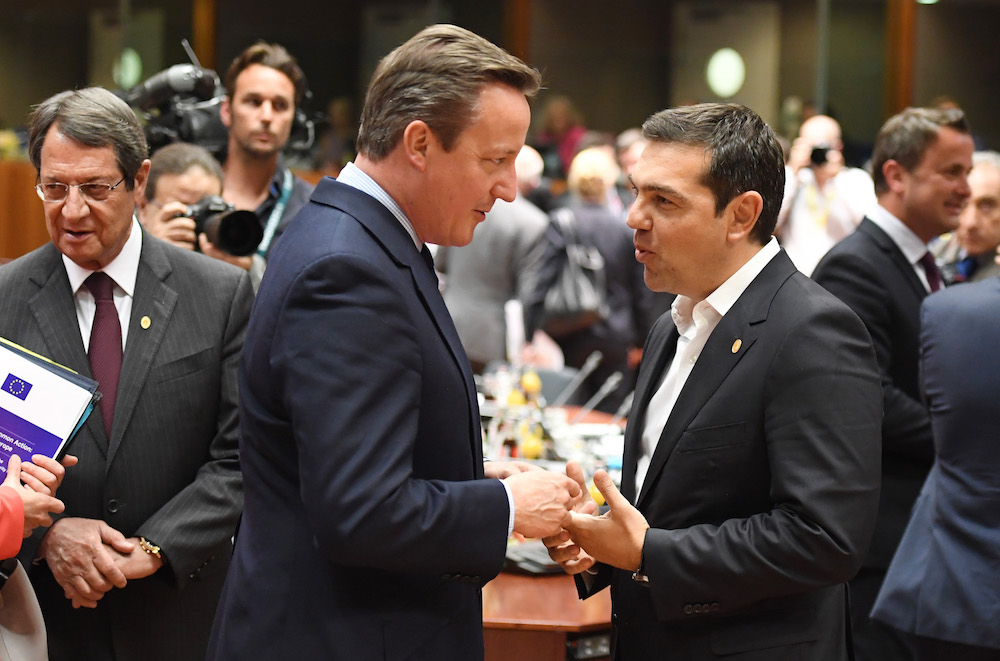 British citizens took to the polls to cast their “Leave” ballots—and their grievances—in the now-infamous Brexit vote last June, seeking to escape the overarching power of the European Union. Their triumph stunned British and global elites, but shouldn’t have; the odds were stacked in the Leave camp’s favor.

The groundwork for the Brexit debacle was laid the previous summer when Europe crushed the progressive pro-European SYRIZA government elected in Greece in January 2015. Most Britons were not directly engaged with the Greek trauma. Many surely looked askance at the Greek leaders. But they must have noticed how Europe talked down to the Greeks, how European Commissioners scolded the Greek officials for their supposed lack of fiscal rectitude, and then imperiously dictated terms for any debt restructuring. The British public witnessed how the European Union made the rebellious country into an example, so that no one else would ever be tempted to follow the same path.

If the submission of Greece to the political will of the EU and its bankers helped set the tone for European disharmony, the Leave campaign won by turning the British referendum into an ugly expression of English nativism, feeding on the frustrations of a deeply unequal nation and concerns about the EU dictating migration policy to member states. Americans can surely relate, both to the ugly nativism and to some of its underlying causes.

Fellow academics and media pundits spend a lot of time decrying the public’s embrace of destructive, so-called “populist” politics. But we should be spending more time evaluating just how out of touch our technocratic elites have become these days. These elites have only themselves to blame for the fact that people are looking for options, and often landing on unsavory ones.

That the Leave campaign could prevail testifies to the high-handed incompetence of the establishments on both sides of the English Channel. Remain ran a campaign based on fear (of recessions and other bad things that happen when you aren’t prudent in the eyes of bond markets), condescension and bean-counting, as though Britons cared only about the growth rate and the pound. And the Remain leaders seemed to believe that such figures as Barack Obama, George Soros, Christine Lagarde, a list of ten Nobel-prize-winning economists or the research department of the International Monetary Fund carried weight with the British working class.

… media pundits spend a lot of time decrying the public’s embrace of destructive, so-called “populist” politics. But we should be spending more time evaluating just how out of touch our technocratic elites have become these days.

So far, since the vote, the economic effects of the vote have been more muted than initially expected. And the political effects will be rather protracted: New Prime Minister Theresa May has announced that formal divorce negotiations won’t start with Brussels until March 2017, with the United Kingdom expected to actually leave the Union in 2019. Meanwhile, markets have settled down and British life has continued normally, undermining the scare campaign waged against a Brexit last spring.

Over time, however, as they apply to the United Kingdom, the structures of EU law, regulation, fiscal transfers, open commerce, open borders, and human rights built over four decades will start eroding. Exactly how this will happen—by what process of negotiation, with what retribution from the spurned powers in Brussels and Berlin, by what combination of slow change and abrupt acts, with what consequences for the Union of Scotland to England—is clearly unknown to the new pro-Leave Tory government.

And Europe’s crisis of confidence will likely continue spreading across Europe: In Holland and France, but also in Spain and Italy, as well as in Germany, Finland, and the East. If nativist populism can rise in Britain, it can rise anywhere.

And if Britain can exit, so can anyone; neither the EU nor the Euro is irrevocable. And most likely, since the apocalyptic predictions of economic collapse that preceded the Brexit referendum will not come true, such warnings will be even less credible when heard the next time.

The European Union has sowed the wind. It may reap the whirlwind. Unless it moves, and quickly, not merely to assert a hollow “unity” but to deliver a democratic, accountable, and realistic New Deal—or something very much like it—for all Europeans. Technocratic elites have to stop bemoaning the ignorance of voters in their countries—be it in Greece, the UK, or closer to home—and start looking at their ineffective and out-of-touch policies that are triggering the “populist” backlash.